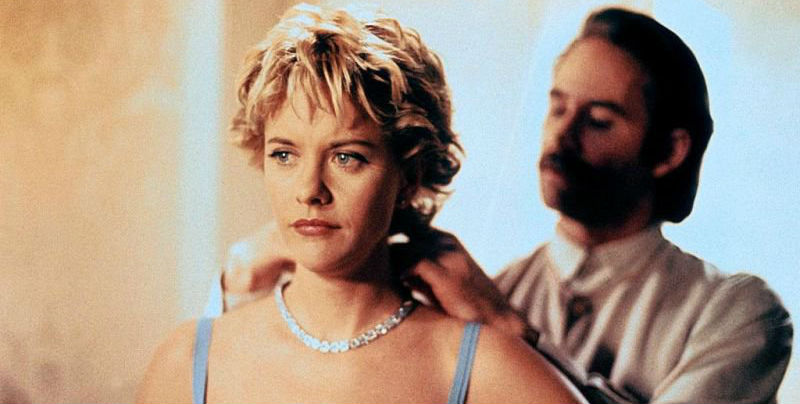 If You Squint, These Rom Coms Are Kind of Dark

It is, as they say, a thin line between love and hate. Take almost any good rom com and there, simmering just beneath the surface, is a sinister tale of emotional manipulation, one marked by the hallmarks of a good crime story: double identities, confidence games, money plays, psychological manipulation of all stripes and sizes. I’d go so far as to argue that no two genres are more closely connected than the romantic comedy and the noir. Take author Laura Lippman’s definition of noir: “dreamers become schemers.” Who could deny that rom coms fit that same bill? Whether you’re talking about Julia Roberts breaking up her best friend’s wedding, Tom Hanks putting The Shop Around the Corner out of business, or Sandra Bullock engaging herself to a comatose man, the annals of romantic comedy are filled with some of the most manipulative and byzantine schemes around. In fact, all it takes is a little altered perspective and it hits you square in the jaw. Really, these rom coms so many of us love so dearly are actually pretty gritty and pretty messed up. For Valentine’s Day, why not treat yourself to one of these classics? Only this time, keep an eye out for the slightly more noir aspects. 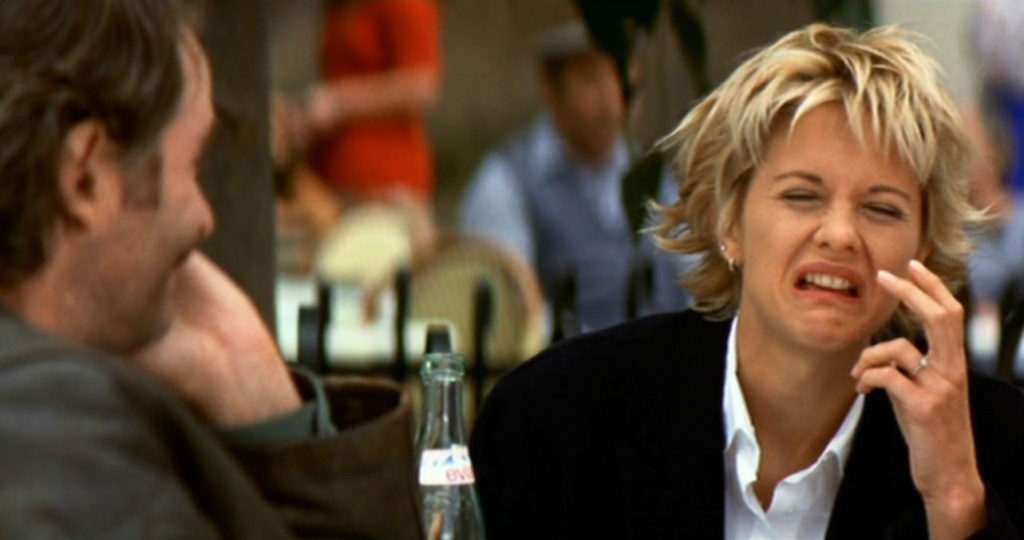 Aspiring Canadian Kate (Meg Ryan) goes to France to lure back her unfaithful fiancee but gets entangled with raffish Luc Teyssier (Kevin Kline), career criminal, jewel thief, oenologist, and expert in the ways of French love. The two hatch a plot to recover fiancee and jewels. Goddard was originally attached to direct—I assume—but pulled out over concerns—again, I’m assuming here—that the plot hewed too closely to his earlier work, including Breathless.

To Read Afterwards: Patrick Modiano, Out of the Dark 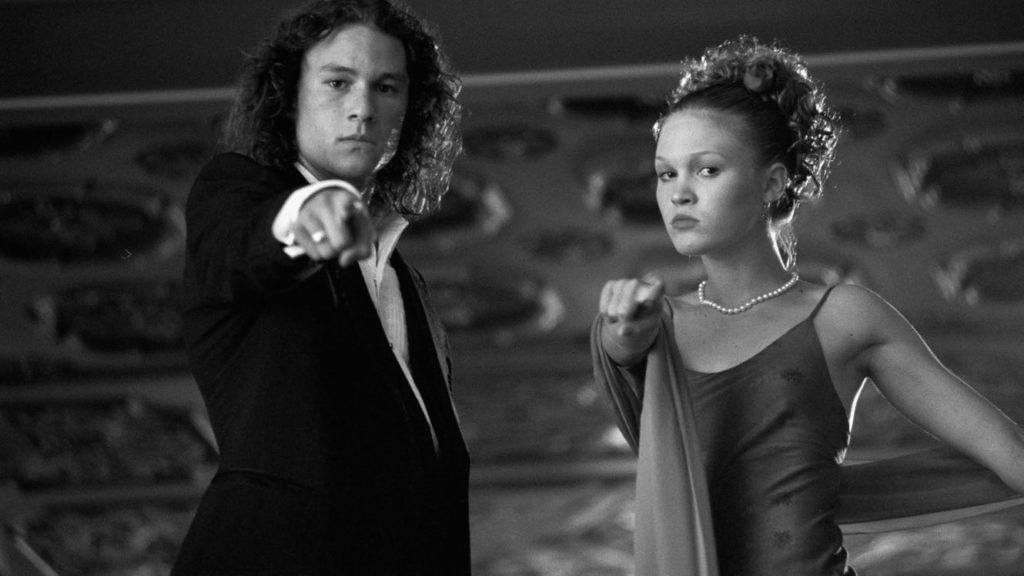 (This ur-1990s retelling of Shakespeare’s The Taming of the Shrew needs no help drifting into psychological thriller territory.) Cameron (Joseph Gordon-Levitt) hires local rogue Patrick (Heath Ledger) to seduce complex Kate Stratford (Julia Stiles), whose sister (Larisa Oleynik) is not allowed to date until her sister does, upon penalty of death or banishment or probably something a little lighter depending on your interpretation of the law. The resulting hour and a half is a relentless mind maze of subterfuge, double crosses, and ridiculously charming musical numbers, until finally all the teenagers seal their fates with poison-laced kisses.

To Read Afterwards: Walter Mosley, Devil in a Blue Dress 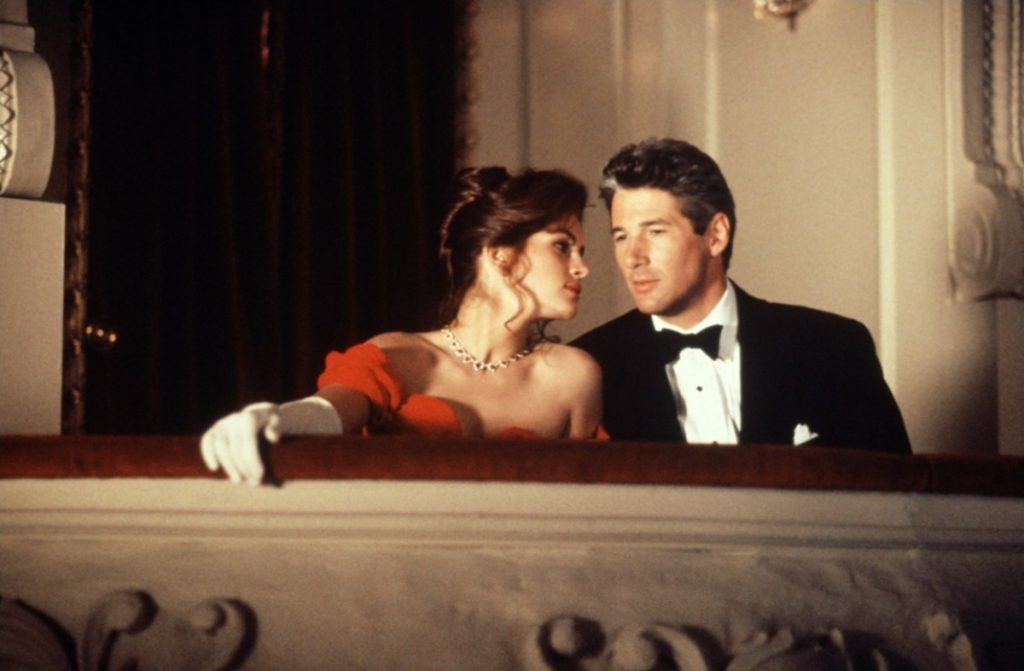 Sex worker Vivian Ward is lured into white-collar criminal Edward Lewis’s (Richard Gere) dangerous web and forced to endure derision of boutique clerks and polo matches attended by Lewis’s white-collar co-conspirators and underworld rivals. The relationship between Ward and Lewis develops gradually until he is convinced to reform by purchasing and not decimating a shipbuilding company that is probably an environmental abuser. Noir icon Gary Marshall directs.

To Read Afterwards: Laura Lippman, And When She Was Good 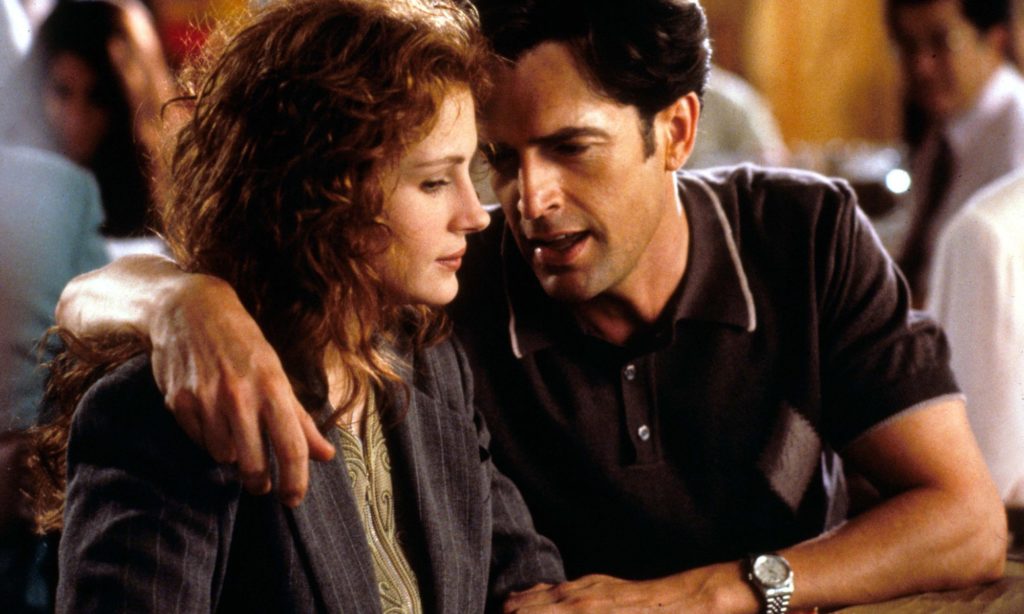 Agent of chaos Julianne Potter travels to Chicago to disrupt the upcoming nuptials of the best friend (Handsome Dermot Mulroney). Potter insinuates herself into would-be bride’s life (Cameron Diaz) and sews discord in the younger woman’s mind. Potter’s co-agent of chaos (Rupert Everett) also appears on the scene to distract assembled friends and family with the magic of song. The wedding goes on but Potter vows revenge, which she will have, because chaos always finds a way.

To Read Afterwards: Araminta Hall, Our Kind of Cruelty 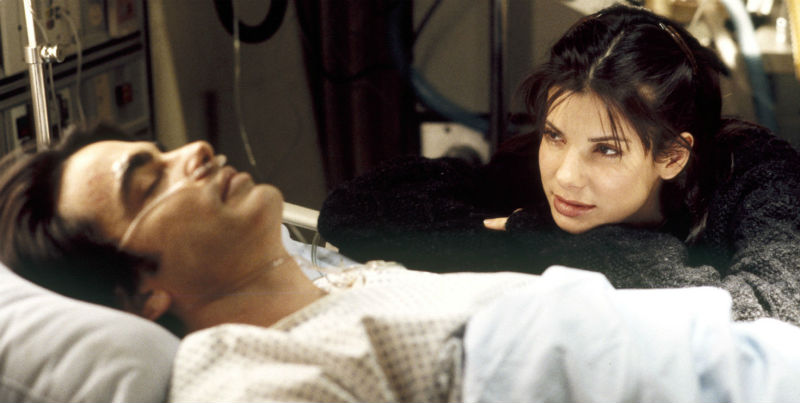 Bored transit worker Lucy Eleanor Moderatz (Sandra Bullock) orchestrates mid-morning attack on commuter Peter Callaghan (Peter Gallagher), who does not die but falls into a coma, at which time Moderatz decides to pose as the comatose man’s fiancee in hopes of collecting insurance payout and/or an eventual theft of family assets, including but not limited to their abundant love. Brother Jack (Bill Pullman) runs interference on the scam but ultimately falls victim to Moderatz himself. 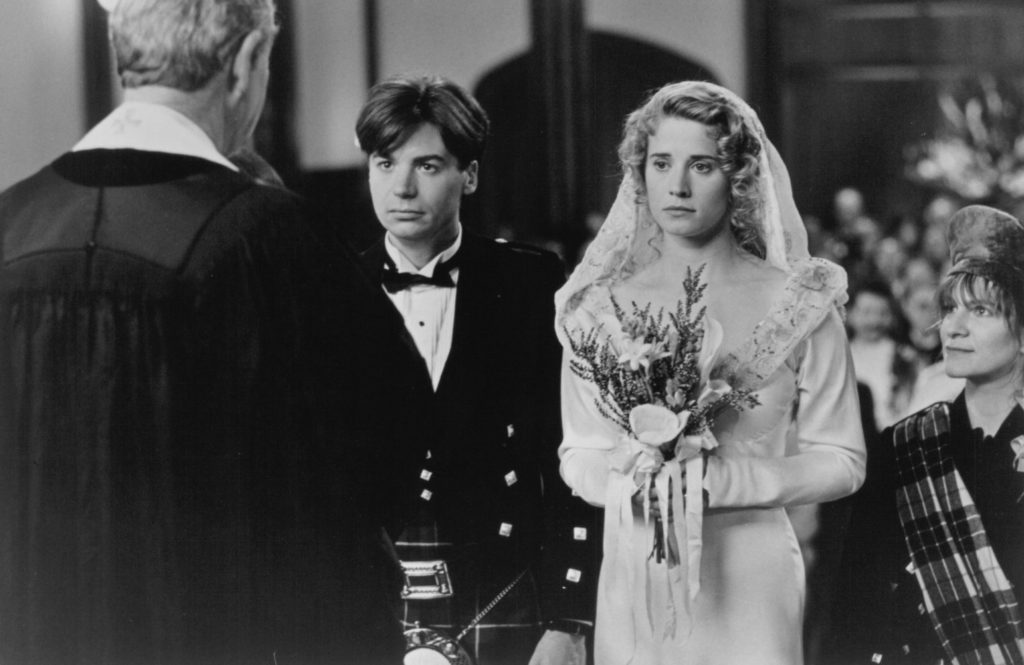 (It’s right there in the title.) Noir action plays out in noir mecca, San Francisco, as a noir jazz soundtrack plays in the background whilst proto-hipsters snap fingers ominously and wade deeper into suspicion / poetic oblivion.

Aged industrialist Samuel Graynamore (Lloyd Bridges) seizes on neurotic office drone Joe Banks (Tom Hanks) and convinces the younger man through means of medical fraud that he is dying of an incurable disease and should accept an immediate jackpot payout / vacation in exchange for performance of ritual South Pacific suicide. The industrialist’s daughters (all played by Meg Ryan) are not in on the scam but abet it by shuttling Joe to the island. The film’s darkest scene unfolds as Joe awakens after a maritime disaster, finds himself afloat atop a set of luxe steamer trunks with an unconscious Patricia Graynamore beside him. The madman finds a radio and dances under the scorching sun to the sinister 1957 Del Vikings hit, Come and Go With Me. 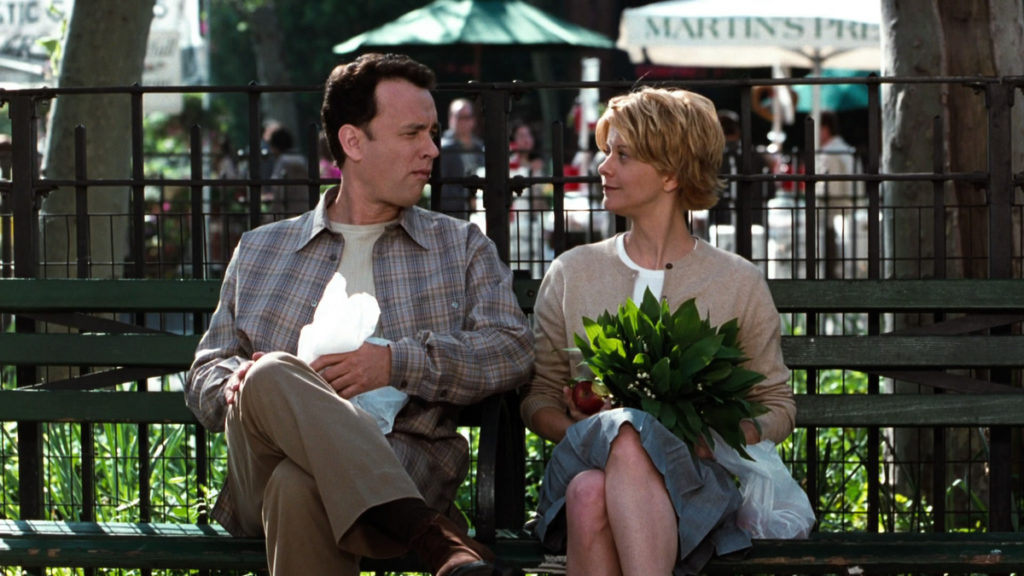 Bookstore mogul Joe Fox snuffs out beloved Upper West Side children’s bookstore, The Shop Around the Corner, run by second-generation bookseller Kathleen Kelly. Not satisfied with Kelly’s professional demise, Fox decides also to engage in an early internet catfishing scheme in which he convinces Kelly to fall in love with him, luring her deeper and deeper into his trap before finally wearing her down psychologically and luring her to Riverside Park, where he docks his boat. The audience does not find out whether Kelly gets on the boat. 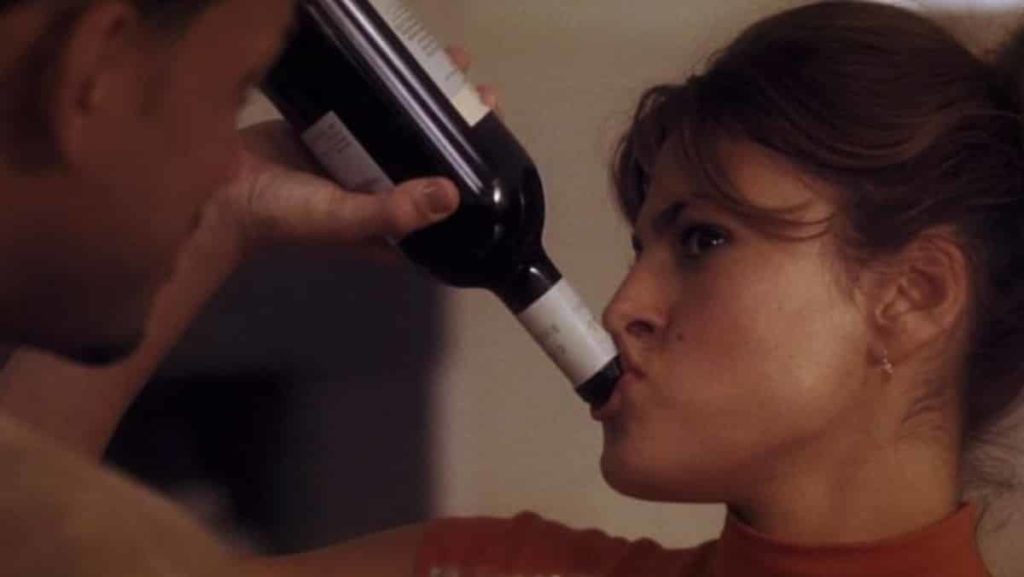 Muckraking journalist Sara Melas investigates notorious “love doctor” Alex “Hitch” Hitchens (Will Smith), allowing herself to serve as honey trap while all the time plotting her own expose of the guru’s crimes. Meanwhile a celebrity and an accountant become embroiled in a broiling love affair stemming from the accountant’s use of an asthma inhaler. Melas is temporarily waylaid by Hitch’s exposing of her dark family history, but quickly recovers the upper hand when Hitch is poisoned and then drugged. 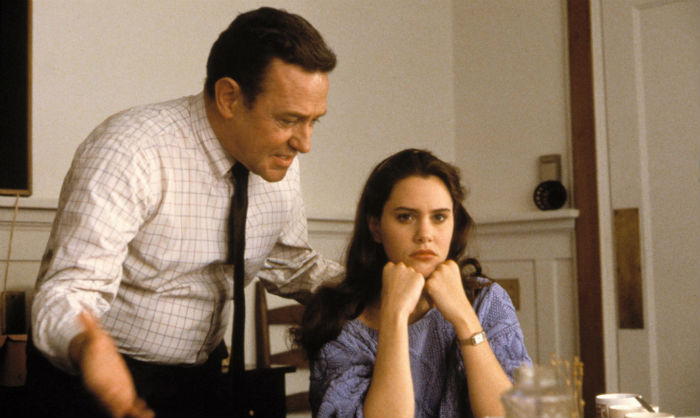 Slacker-with-a-heart-of-gold Lloyd Dobler (John Cusack) falls for Diane Court (Ione Skye), high school valedictorian destined for better things until her single father (John Mahoney) is revealed as an embezzler preying upon the very retirees he was meant to serve, hurling Court onto a dangerous trajectory of boys, standard transmissions, and nihilism. The embezzler receives his sentence and Court reluctantly agrees to visit him at the penitentiary, part of an informal scared-straight program the men have concocted to steer her back onto the right path. Darkness has its talons in her, though; not even Peter Gabriel can reach her. Or maybe Peter is the only one who can. 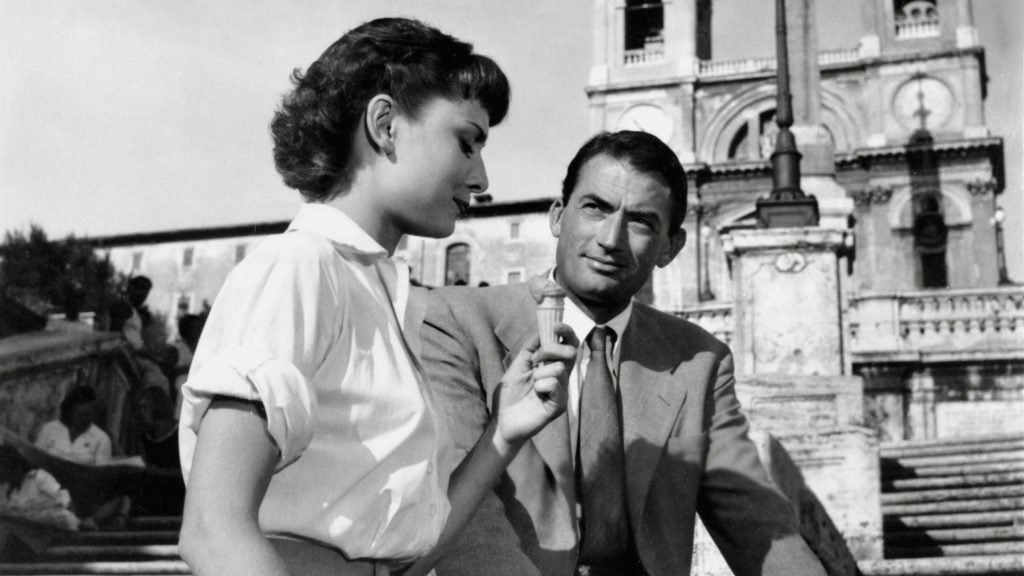 The crown princess Ann (Audrey Hepburn) is living a restrictive life of palace obligation and self-medication when one night, while in Rome on state business, she escapes her security detail. Jaded American expat reporter Joe Bradley (Gregory Peck) finds her in his apartment, seems not to know who she is, then does, then leads her around Rome in order to clandestinely record and report on her doings. They are pursued by a coterie of henchmen, guards, and competing tabloid reporters. 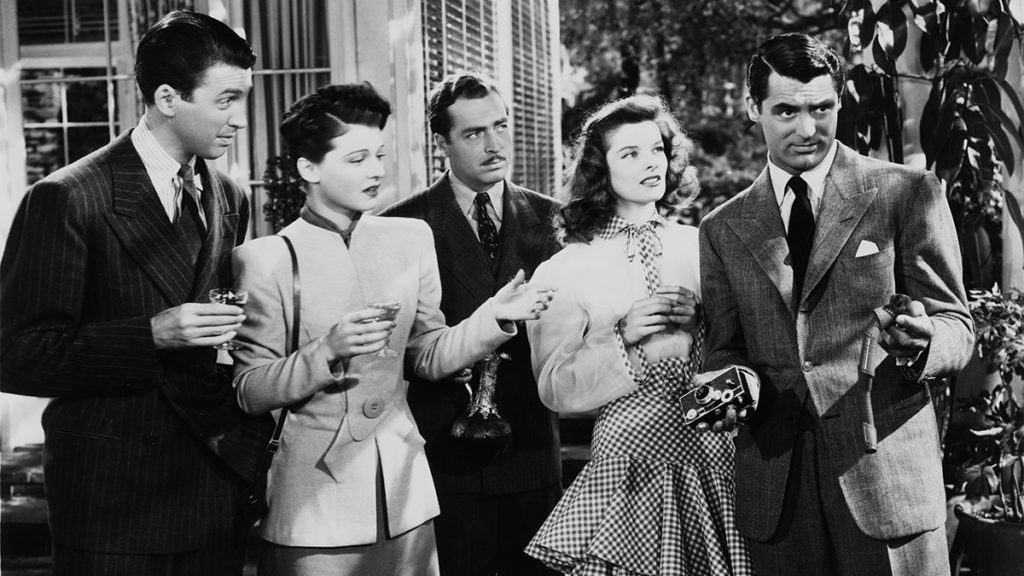 Engaged socialite (Katharine Hepburn) Tracy Lord is scheduled to be married for the second time when her ex-husband, C.K. Dexter Haven (Cary Grant) arrives for the pre-nuptial weekend with a Spy magazine reporter (Jimmy Stewart) and photographer (Elizabeth Imbrie), claiming that the pair are friends of the bride’s brother. When their true identities are revealed, Dexter Haven resorts to blackmail, threatening to expose the bride’s father’s extramarital affairs to public scrutiny. Lord reluctantly complies. My she’s yar. 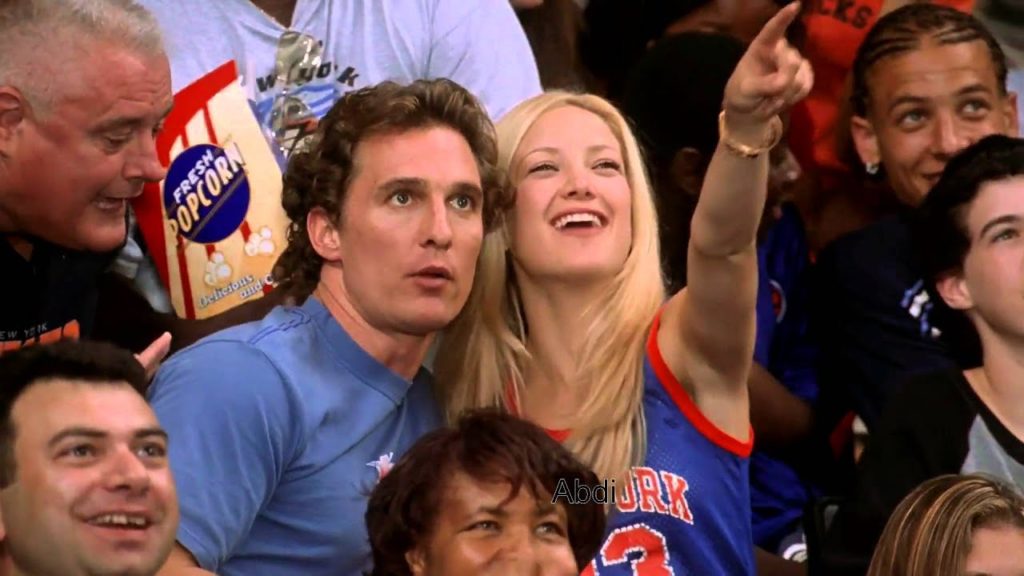 Andie Anderson (Kate Hudson) needs a scoop for her next Composure magazine column and decides to gaslight ad executive Benjamin “Ben” Barry (Matthew McConaughey) into breaking up with her, while unbeknownst to Anderson, Barry has accepted a wager to make a woman fall in love with him within the same 10-day time period. Conflict ensues as the two obscure motives, exploit weaknesses, and play a dangerous game of brinksmanship that ends in missing a Knicks game. 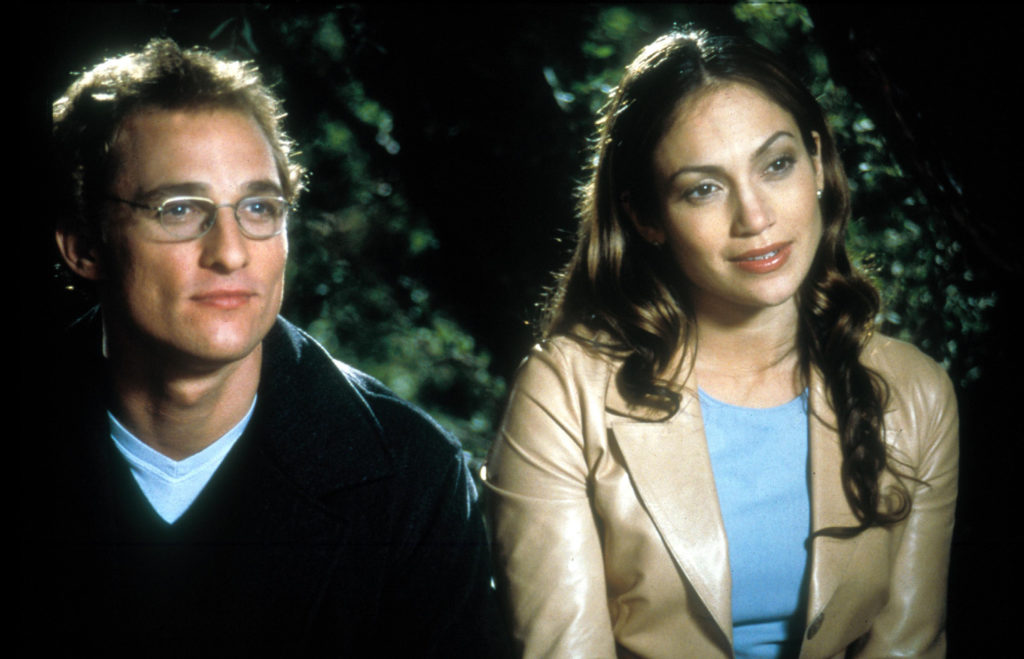 Successful San Francisco wedding planner Mary Fiore fakes her own near-death to meet Dr. Steven James Edison (Matthew McConaughey), a pediatrician engaged to heiress Fran Donolly (Bridgette Wilson-Sampras), who has hired Mary to plan their wedding. Mary and Eddy’s chemistry is made apparent during a tango session. After the tango session, Mary and Eddie begin separately plotting Fran Donolly’s demise, but are luckily saved from having to follow through with their plans when Fran calls off the wedding herself, I forget why.

To Read Afterwards: Ruth Ware, In the Dark, Dark Woods 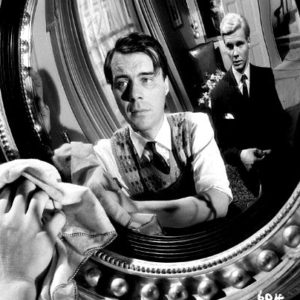 The shifting ground of power dynamics between those who serve and those who are served has always offered rich-pickings to writers...
© LitHub
Back to top