An unlikely gang of mystery-solvers set out to change the world.

Fifty years after his creation, Scooby Doo needs no introduction. But when he appeared on television for the first time, on Saturday, September 13th, 1969, he was not given any sort of explanation. The pilot episode of the CBS series Scooby Doo, Where Are You!, developed by William Hanna and Joseph Barbera, offers no backstory and not a single reason to explain how a giant talking dog and his four adolescent human friends came to know one another, or why they began solving mysteries together, let alone how they turned this habit into a specialized business-of-sorts. The countless spin-offs and sequels within the Scooby Doo franchise (including the late-80s series A Pup Named Scooby Doo, which reimagines the five sleuths as children) have attempted to offer context and origin stories but ultimately, when viewers first encountered Scooby Doo and his friends, they were asked to take all these elements at face value—including that, if the lyrics to the title song were to be believed, there was some important work to do that required Scooby Doo’s assistance, and in fact could not be done without him.

The show, which released seventeen twenty-minute-long episodes in its first season, and eight in its second, follows a simple formula. Not that you likely need it rehashed, but just in case, here goes: there is some strange, usually supernatural happening that the teenagers, driving around in a groovy, tricked-out van called “The Mystery Machine” stumble upon. Often, a particular space—an amusement park, an abandoned mansion, an old castle, a deserted mine, an empty theater—is occupied by a malevolent entity (usually a ghost, occasionally a monster) which has driven or scared people away, or prevented them from coming near it. Scooby Doo and the kids usually trespass on the property, encounter the creature that has been causing trouble, chase it around for a bit, elaborately trap it, and then unmask it—usually revealing that it is actually just some forger, counterfeiter, treasure-hunter, or other opportunist in disguise trying to keep people away from the property to exploit its resources or conceal it as the base of criminal activity. Thus, very often, in Scooby Doo, the creepiest, most otherworldly happening will simply turn out to be something as banal and realistic as real-estate fraud or a marketing scam.

In our own zeitgeist, this conceit has become the most ubiquitously recollected thing about Scooby Doo: the gesture of yanking off a ghoulish mask to reveal the innkeeper’s assistant Hank or old Captain Cutler himself or Carl the stuntman is as widely known as the corresponding villainous accusation of “I would have gotten away with it too, if it weren’t for you meddling kids” (though the quote is, much like “elementary, my dear Watson,” never actually uttered in the original show). But this formulaic revelation, promised to come at the end of every episode, offers on its own a particular criticism of the world at large.

The show is, in its roundabout, farcical way, an indictment of adult-world capitalism, not too far out of line with the general principles of the counterculture movement that was concurrently beating through the country.

The very point—the most dependable part—of Scooby Doo is the lesson that there is a reasonable explanation for every strange occurrence. But this is twofold: there is always a physical, scientific explanation for spooky phenomena, as much as there is a consistently human motivation for waging an intricate deception, in the first place. While the villains of Scooby Doo require an understanding of physics and engineering to devise things as diverse as fan-propellers to levitate tables or mechanisms to effectively project Pepper’s Ghost, they are all motivated by a single thing: greed. Whether it’s Mr. Jenkins building Charlie the Robot to run his amusement park more efficiently than a human worker, or Bluestone the Magnificent, the magician trying to scare off visitors so he can search for treasure in a castle, or Stuart Weatherby, costuming himself as a spirit to scare relatives into giving him their inheritance, all the malfeasance and related costuming in Scooby Doo is a desire for some economic gain.

It’s important, then, that Scooby Doo episodes do not end on a moralistic theme, but a realistic one. Indeed, every episode of Scooby Doo, Where Are You? actively pursues and valorizes realism, ending on a note of comfort and explanation—strange, considering its protagonists are four detective-teenagers and an anthromorphic pet. But then again, the protagonists of Scooby Doo being so young and cool (the teenagers) as well as classically cartoonish (the talking dog) allows Scooby Doo to speak on multiple levels to its young audiences. It’s the lack of realism in Scooby Doo that makes its general insistence on being realistic all the more inviting. But in another, timelier sense, Scooby Doo offered a hyper-realistic sensibility. The show is, in its roundabout, farcical way, an indictment of adult-world capitalism, not too far out of line with the general principles of the counterculture movement that was concurrently beating through the country.

Reading Scooby Doo as being thoroughly invested in rationality and realism alongside its anti-capitalist sentiments offers a perspective on what work the show was doing in 1969, at the end of an increasingly turbulent decade, one month after Woodstock. For one thing, the complicated and messy political, civil, and social dynamics of the decade were not as easily unraveled as, let’s say, the Mummy disguise from season 1, episode 12—the 60s notably presented problems that could not be solved easily or decisively, with villains that could not be so plainly identified. But the lessons of Scooby Doo do not contradict that real capitalistic problems are harder to solve than its own cut-and-dry mysteries, so much as recommend a mindset to deal with impossible problems of any kind.

Scooby Doo suggests to the youth of America an alternative path for resistance against a greedy grown-up world, one achieved by outsmarting the enemy, rather than either fighting it or protesting it.

In Scooby Doo, four teenagers with different social associations (the pretty rich girl, Daphne; the overachieving golden boy, Fred; the goofy stoner-esque caricature, Shaggy; and the nerd, Velma) drive around in a psychedelic van, resisting a status-quo dominated by corrupt and conniving adults. Towards the end of a decade marked by chaotic cultural shifts, mounting tensions, and mass violence, Scooby Doo insists that there is always an underlying solution that may be achieved through calm investigation. They are all automatically united, against their archetypal differences, in pursuit of sanity and normalcy, debunking the extreme situations that have disturbed local everyday life, through patience and pragmatism. In this way, Scooby Doo suggests to the youth of America an alternative path for resistance against a greedy grown-up world, one achieved by outsmarting the enemy, rather than either fighting it or protesting it.

Necessarily, Scooby Doo also calls for community. It’s not clear who owns Scooby Doo, and it doesn’t matter—Fred says out loud that “we” love him, implying that he’s their collective pet, or even just an autonomous member of the gang. There’s a communal, familial aspect to their grouping—it’s unclear how much time they spend together, but they’re rarely seen with anyone else. But key to the Scooby Doo ethos is that the audience participates in their investigations. There is canned laughter—an audience already inside the show. “We need some help from you, now” the singer (the musician Larry Marks) of the theme song exhorts, enveloping himself and the viewers in this collective pronoun.

Indeed, the theme song does more than this, in enlisting its spectators in their community. The theme song, which provided viewers’ first frame of reference for the show, since it played before the entire show began, treats the character like the audience already knows him, calling out, “Scooby, Scooby Doo, where are you? We’ve got some work to do, now.” This expedited impression does not resemble the title songs to other Hanna-Barbera cartoons from the 1950s and early 60s, which habitually begin with presentation and salutation, like “Meet the Flintstones, they’re the modern stone-age family” or “Meet George Jetson, his boy Elroy, daughter Judy…” or “Yogi Bear is smarter than the average bear” or even “Up and at’em, it’s Atom Ant!” Scooby Doo, Where Are You? clearly doesn’t attempt to advocate for a return to a kind of whitebread suburban fantasy of the 1950s—it’s different, and its song sounds different, than the ones that came before. The emphasis is no longer on greeting newcomers, but automatically embracing them—recognizing them as fellow fixers.

There’s no time for pleasant introductions, Scooby Doo, Where Are You? insists to its viewers—because there is too much to do, and it’s time to get to work. 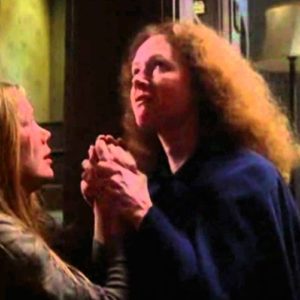 Without getting all ‘My Favorite Murder’ about it, I do love a good cult. Extreme religion—aspects of a belief system...
© LitHub
Back to top