7 Crime Tropes We Really Could Do Without

It's time for a genre full of cliches to clean up its act.

It’s no mystery that crime fiction readers are more likely to be women than men (by 57% compared to 39% according to a 2010 Harris poll). I am most certainly guilty of being a tiny slice of that statistic, devouring what likely amounts to thousands of hours of crime books, podcasts, television dramas and procedurals over the course of my adult life, as well as writing crime fiction.

The genre’s DNA has evolved in the last five years, perhaps knowingly, in reflection of this audience. While rape has always been present in crime fiction, now rape, particularly stranger rape, BDSM-like torture, and domestic violence, has become central to the plot of many contemporary works of crime fiction. These narratives arguably make women central to the story, allowing for feminist discussions of rape that acknowledge subtler forms of assault as well as the most violent. Meanwhile the investigators who will eventually become the heroes of the piece are no longer the usual line-up of white, middle-aged males, although a pair of female police detectives is still hard to find.

Yet still, certain tropes and stereotypes that smack of a more machismo past persist; perhaps part of that DNA or at least hard to wash out, like blood on a motel mattress. I mean, is it plausible that every female police officer working a serial rapist case has a history of past abuse? And can’t we make one crime drama without an alcoholic detective? While I know cutting as we understand it in writing doesn’t require an actual knife, there are some sexist crime tropes that deserve to be put to a sharp and violent end. 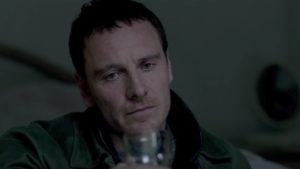 1: The lead male detective who is deeply troubled, but who we, the reader, are supposed to love.

“He cheats on his wife, but he has a heart of gold.” No he doesn’t. Have you ever met a guy in real life who cheated on his wife and had a heart of gold? It’s inauthentic boohockey and it must be stopped. Even worse is when a male character otherwise written as “charming” has a murky incident of domestic violence in his past. Hitting your ex-wife or killing someone is not, and never should be, an interesting character flaw. Remember Lawrence Block’s Matthew Scudder, whose “intriguing” backstory features accidentally causing the death of a seven-year-old girl? A female hero, to point out a double standard, could never be so problematic without being seen as “unlikeable.” 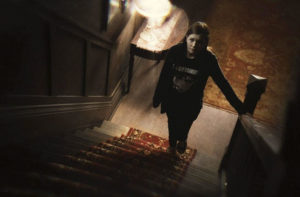 2: The woman who runs upstairs.

No one is a) that lacking in common sense, and b) that ignorant of the horror film rules learned in Scream. Except maybe little kids. Little kids get to run upstairs without provoking my derision. The woman who runs upstairs doesn’t exist, and not solely because 80% of the US population live in urban areas and therefore have a neighbor to call to for help—the woman who runs upstairs is a symbol of how the male gaze perceives a certain sort of woman—often young, always pretty—to be childlike, ditzy, and helpless. 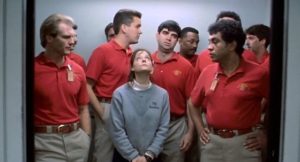 She’s twenty years younger than the rest of the squad and graduated magna-cum-laude from Harvard, but she’s childless, single, and her disregard for union working hours and nosy-parker attitude just rub people the wrong way. She solves the case, but at some point her naivety and headstrong ways put her in the hands of the killer. Clarice Starling, anyone? Fortunately, the mistaken rookie is oft-saved by the well-timed arrival of her older male colleague. And then maybe they make out. Watching or reading about a beautiful young woman, who is an intrepid rising star and yet foolish, feels like an antiquated bible story about how pride comes before a fall and women should shut their mouths and learn from their elders, who are all men. 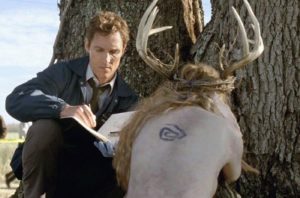 No, this isn’t a Victorian ghost. She is the dead, naked babe that greets us in the prologue and disappears as a character after the first few chapters (or episodes of True Detective, and myriad Scandi Noir series). We’ll learn about the childhood of her killer, but we never meet her family or learn more than her name, while the image of her pale, flat stomach and perfect, blue breasts will be frequently returned to in the autopsy room or the flashbacks the lead detective gets while he’s drinking. 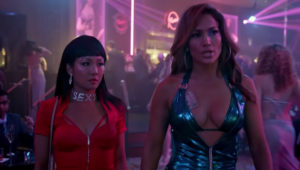 5: The victim no one misses.

She was a junkie, a runaway, an occasional call girl, and now that she’s gone even her landlord doesn’t care about the unpaid rent. In reality, it’s true that some killers target the victim no one misses, but it’s worth interrogating what we mean here by “no one.” I’d postulate that “no one” means sex workers, people of color, homeless people, gay people, trans people; in other words, “no one in a position of power or influence” and not “literally no one to write about who had any idea this human female existed prior to her death.” Maybe this dead woman is a Kitty Genovese, whose girlfriend was mentioned in the papers only as Kitty’s “roommate.” Dear Writers, realize what history has erased and don’t make the mistake of furthering that erasure. 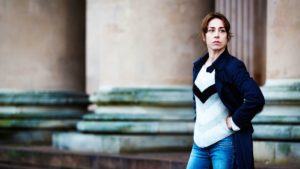 Let’s start with the jobless wife of the detective—what is she doing folding laundry all day? Doesn’t she know how much police officers earn in modern-day America? Why can’t she also be a gritty, flawed detective who plays by no one’s rules, not even her own, because of her poorly disguised alcoholism? It’s true that women carry out at least two and a half times more unpaid household and care work than men, but if you’re not making a comment about it, don’t represent it. That the good wife is always paired with a bad husband says something about how we perceive women as those who must keep us all morally on track. Enter the bad mother/good detective. She leaves her older kid in charge of her younger kid (gasp!). She works overtime and isn’t home to cook dinner (neglect!). Her husband left her (of course he did!). She’s Sarah Lund in The Killing! What’s problematic here is that there is no good detective/bad father trope, and that’s not because working all hours of the day and leaving images of crime scenes on the living room coffee table doesn’t affect a man’s ability to parent, but it’s because whether or not a man is a flawed father figure doesn’t affect our moral judgment of him. The bad mother trope is used to show that the good detective in question is nevertheless a flawed character, because we charge women with the responsibility of being the moral bellwethers of the domestic realm, which is of course, literally the only thing the good wife exists for. 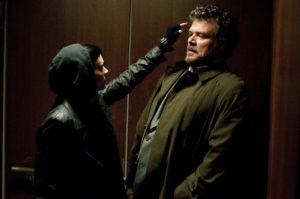 Since Stieg Larsson’s The Girl with The Dragon Tattoo, I have understood the power of the intelligent and non-exploitative rape narrative. My latest novel Dead Girls centers around the rape of a young girl, and how it shapes her best friend’s psychology from the moment she is reported missing. Narratives about rape that address survivors and victims as whole humans, that are well-researched, and that interrogate why the abuser committed the crime are important. We need to know why sexual assault and domestic violence happens, what its consequences are, both physically and emotionally, and how social changes can prevent it. Perhaps the answer lies in preventative acts like town planning, CCTV, free travel on public transport for women after 11pm; perhaps it’s compassionate management of sex offenders, ensuring they don’t face stressors that could lead to reoffending, like societal persecution, homelessness or unemployment. We don’t however, need rape narratives that dwell on the violence or action of the act, rather than the internal emotions and thought processes of the people involved, in order to create drama or intrigue or to get a series commissioned because sticking a dead, naked woman in it makes it feel “edgy.”

To be illuminating, a rape narrative must first be realistic. Only a quarter of murder victims are women; eighty-five percent murdered by a man they knew. More than half had been, or were at the time, romantically linked to their killer. It’s important to get the facts straight, because what we read and watch affects our perception of the world around us. Let’s not give the impression that all women are at all times at risk of being raped, and that those rapes are most often perpetrated by strangers. Women should and can go for a walk after sundown without fearing for their lives.

Abigail Tarttelin is the award-winning author of Golden Boy, “a grippingly innovative” coming-of-age novel with a “radical non-binary, pro-intersex message” (Autostraddle). Abigail’s debut Flick explores masculinity in northern England. Her 2019 novel Dead Girls, out October 15th from Rare Bird Books, drills down through “layers of moral and cultural norms” to offer “a strong indictment of cultural and narrative scripts that permeate our society” (Hackney Citizen). Her journalism has appeared in The Guardian, The Independent, Glamour, and many others. 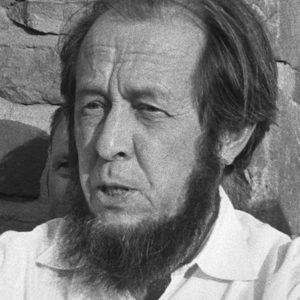 In 1974, KGB chairman Yuri Andropov was at the height of his powers. A tall, reserved man with sparse gray hair combed back...
© LitHub
Back to top