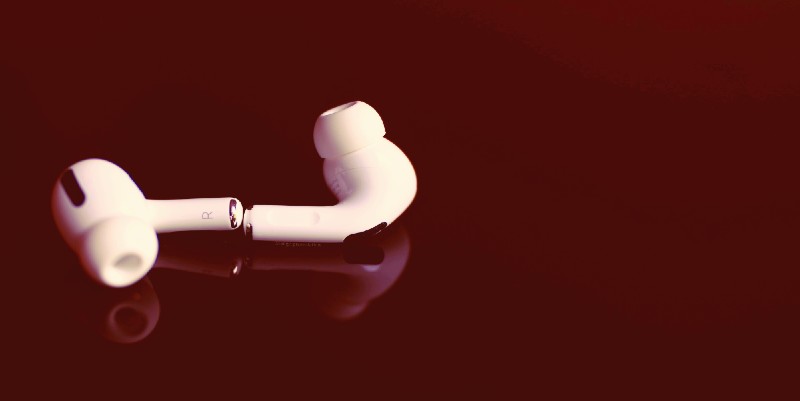 When Keats described autumn as a “season of mists and mellow fruitfulness,” he probably didn’t have doomsday religious cults, deathbed confessions, and Silicon Valley intrigue in mind, but that (and so much more!) is exactly what’s in store for this fall. So grab your sweater, a warm beverage of your choice (no judgment if it’s the much-pilloried PSL), and your headphones, because autumn 2021 is a veritable buffet of just-in-time-for-Halloween true-crime goodness. 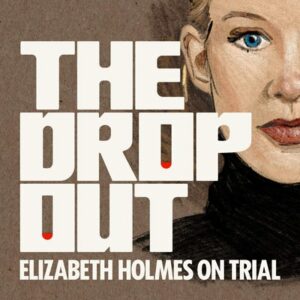 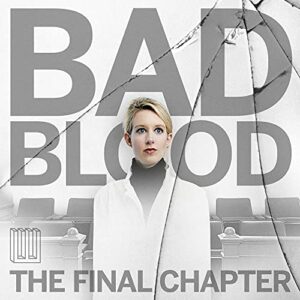 Okay, I know these are two separate podcasts, but since they both 1) cover the same topic and 2) are equally good, I couldn’t pick just one. Also, I’m a sucker for any show that charts the unfolding of a court case in real time. (Parents, in case you’re  reading this, the answer is still no. Just because I like listening to court cases doesn’t mean I want to quit writing and go to law school. I’ll take the garret over the gavel any day of the week.)

Back to our regularly scheduled programming: by this point, I’m assuming you’re familiar with the case of Elizabeth Holmes, the blonde, beturtlenecked wünderkind whose blood testing company Theranos went belly up in 2018 amid a maelstrom of fraud charges.

In the three years since feds handed down indictments, the self-styled Steve Jobs 2.0 has been busy: she shacked up with a hotel heir nearly a decade her junior, partied at Burning Man (in an excellent outfit, by the way, reminiscent of Almost Famous’s Penny Lane), and gave birth to her first child. August 31 marked the start of what’s bound to be a long and (hopefully just figuratively speaking) bloody trial that could result in the erstwhile billionaire spending twenty years behind bars. Will a jury of twelve of Holmes’s peers sentence her to prison time? What bearing—if any—will Holmes’s status as a new mother have on the outcome of her trial? Will jurors take pity on her or view her recent pregnancy as a calculated sympathy play? 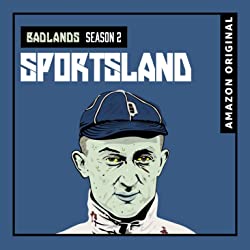 I don’t know about you, but I’m no athlete (not unless you count the decidedly un-vigorous walks I got in the habit of taking during Covid, usually with podcast-blaring headphones in ear). That said, if there’s anything my true-crime obsession has taught me (not to mention the books of suspense sorceress Megan Abbott), the world of high-stakes sports is an incredibly fertile breeding ground for all sorts of nefarious activities. Enter Sportlands, the newest iteration of the much-loved Badlands. Sportsland digs into the nitty gritty of all sorts of sports-related Up first? Mike Tyson, whose ‘90s spiral into violence, drugs, and bizarre behavior culminated in prison time for a rape charge. On deck? Oscar Pistorius, aka “Blade Runner,” who was convicted of murdering his model girlfriend in 2016. Other figures profiled this season include Tonya Harding (my personal favorite athlete of all time), Aaron Hernandez, Pete Rose, O.J. Simpson (what true-crime-meets-sports podcast would be complete without him?), and many more. 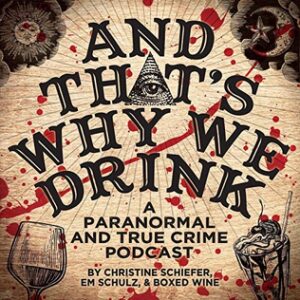 And That’s Why We Drink (Stitcher Media)

This pod is an oldie (the show will turn five in February!) but a goodie, so I couldn’t pass up the opportunity to profile it.

And That’s Why We Drink (affectionately known as ATWWD to those in the know) lives at the intersection of paranormal and true crime, with a dash of comedy thrown in for good measure. Every Sunday, co-hosts Christine Schiefer and Em Schulz sit down (with wine and milkshakes respectively) and dive deep into the creepiest cases.  I like a good beverage as much as anyone (I, like Em, am partial to milkshakes), but be warned: do not let this pod’s relatively tame name fool you. Some of the cases explored in this pod are downright spooky (think ghosts, krakens, family annihilators, cryptids, and a Lisa Frank Ouija board…?) ATWWD has a devoted fanbase, and a number of episodes (nearly 60 at this point!) feature listeners’ own strange-but-true tales.

The team behind ATWWD isn’t just about producing great crime-related content: they care about making the world a better place too. And that’s why they (does that count as a pun?) used virtual events during the COVID lockdowns as a way to support worthy causes. The pair donated all net proceeds from two at-home live shows to the Marsha P. Johnson Institute, in support of the organization’s efforts to protect Black trans and gender non-confirming people, especially in the arts. This past July, the duo hosted their first ever Cryptid Poetry Slam, a live show and silent auction benefiting Asian Americans Advancing Justice. 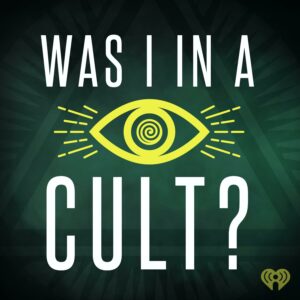 Was I In A Cult? (iHeartRadio)
Premiered September 8

Unless my all-consuming devotion to true-crime cult classics like Forensic Files, Cold Case Files, and Unsolved Mysteries counts, I don’t think I’ve ever been in a cult, but the individuals you’ll meet in this new offering from iHeartRadio have. And, more importantly, they’ve survived to tell their stories firsthand to co-hosts Tyler Measom (an award-winning filmmaker whose credits include Netflix insta-classic Murder Among the Mormons) and writer/comedian Liz Iacuzzi. First stop? Utah! Fearing the impending apocalypse, Joanne and husband decamp to the Beehive State to live “Mormonism on steroids.” On the menu? Long underwear, talking to the the dead, nomming on cookies with the Alpha and Omega himself (aka Jesus), and celestial marriage (aka polygamy). Everyone’s familiar with religious cults, but, as Iacuzzi and Measom will show us, cults aren’t just limited to the spiritual realm: there are self-help cults, sex cults, political cults, exercise cults, and even organic juice cleansing cults…? (Okay, jury’s still out on that last one.)  This documentary podcast gives listeners firsthand inside knowledge of what it’s actually like to be in a cult—and what it’s like to get out and rebuild your life. 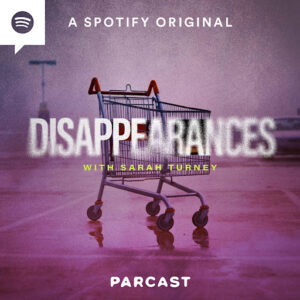 If the name Sarah Turney sounds familiar to you, that’s because it probably is: Sarah is the younger sister of Alissa Turney, the Arizona 17 year-old who went missing in 2001. Using a combination of social media platforms and podcasting (Sarah’s first pod, Voices for Justice, premiered in 2019 and is still going strong today), the younger Turney mounted an online campaign to bring attention—and much needed closure—to her sister’s case. Sarah’s tireless efforts paid off: Michael Turney, Sarah’s father and Alissa’s stepfather, was indicted on murder charges in August 2020 and is currently awaiting trial. Now, Sarah (in conjunction with Parcast, the studio behind favorites like International Infamy, Today in True Crime, and many, many more) brings us a brand-new show dedicated to shedding light on missing persons cases both solved and unsolved.

The show, which debuted as a Spotify Original on September 9th, kicks off with the case of Etan Patz, the New York City 6 year-old whose 1979 disappearance prompted the use of milk cartons to publicize the cases of missing children. Other cases covered this season include the band of never-been-found Alcatraz escapees (who fled the supposedly shark-encircled prison and have never been seen again) and an adventurous Rockefeller (yes, those Rockefellers) who never returned from a trip to New Guinea. 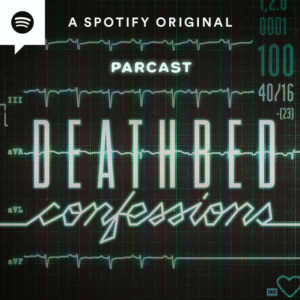 Speaking of Parcast, have you listened to Deathbed Confessions yet?

I love a good deathbed confession as much as the next true-crime devotee (cases like those of Adam Walsh and the Weepy-Voiced Killer were solved through deathbed confessions—and,  in more recent news, the infamous 1975 Bronfman kidnapping), and a whole show dedicated to them is just my cup of tea. If you think deathbed confessions are uncommon (or nothing more than a tired TV trope), think again. Every hump day, this new Spotify Original serves up salacious secrets that most certainly did not make it to the grave. Murder, fake identities, heists, illicit affairs, and under-wraps government intrigue are just some of the juicy tidbits issuing from the lips of the near-dead. What’s in store for this season? A former CIA officer claims he played a role in JFK’s assassination. A contractor insists that Rolling Stones founder Brian Jones’s death was no accident. A silent-film starlet succumbing to a heart attack takes responsibility for one of Hollywood’s most notorious unsolved crimes. Dear reader, if you don’t mind me asking, what juicy secrets are you saving up for your own near-death confession? 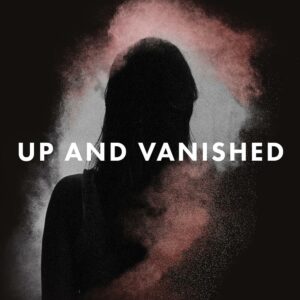 I still remember the moment I first listened to Up and Vanished. It was January 2017. I was driving in the dead of night through rural Georgia—oh, the coincidences!—Payne Lindsey’s endearing Atlantan lilt filling my car with equal parts charm and pure Southern Gothic horror. To say I was hooked would be an understatement. (I’m still waiting for the day when I can try Payne’s grandma’s Cowboy Cookies!)

After devouring cases of Tara Grinstead (season 1) and Kristal Anne Reisinger (season 2), I’m excited to dive into season 3, which tracks the disappearance of Ashley Loring HeavyRunner, a 20 year-old Indigenous woman who went missing from the Blackfeet Nation Indian Reservation in 2017.

Cases involving missing women of color generally receive less media coverage than those of their white counterparts—what’s more, violence against Indigenous women is epidemic levels. In UAV Season 3, Lindsey travels to Montana, where he works with Ashley’s family to try to solve her case.

Whenever I’m asked about my favorite reads, my go-to recommendations are almost always YA mysteries. I have an expensive...
© LitHub
Back to top