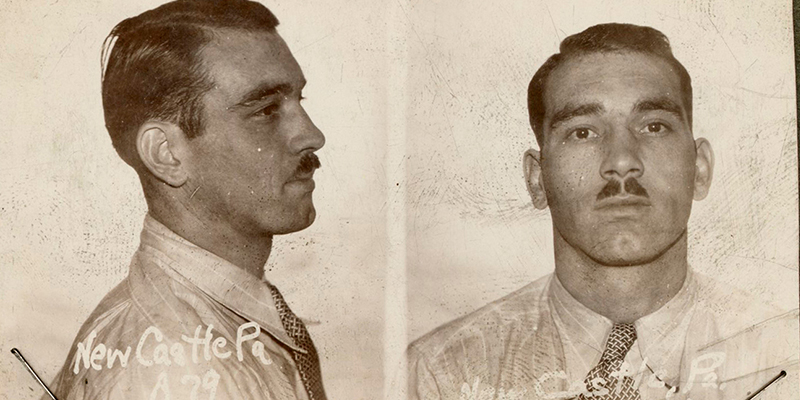 With the popularity of true crime books, podcasts, and documentaries firmly established, it should come as no surprise that a collectors’ market for related, creepy memorabilia exists. In fact, a book called Killer Collections by Paul Gambino, forthcoming next April, surveys thirteen avid crimeophiles.

While some true crime collectors seek their prey from dealers on the web whose ethics are debated by victims’ advocates, macabre artifacts associated with gory crimes and notorious criminals also turn up buried deep within large, international auctions of rare books, historical documents, and ephemera. In past years, sinister objects like Hitler’s telephone and Bonnie Parker’s snake ring found eager, deep-pocketed buyers this way. In 2021, many such items enticed collectors: here are nine that stood out.

The Gun that Killed Billy the Kid

Amongst a collection of historical firearms and documents amassed over fifty years by the late Texas A&M University engineering professor Jim Earle and his wife, Theresa Earle, was the Colt revolver used to kill Billy the Kid on July 14, 1881. Billy the Kid, aka William H. Bonney, was wanted for the murder of at least nine people, including a sheriff. As the story goes, Sheriff Pat Garrett tracked the outlaw for months, finally catching up with him on a ranch in New Mexico, where he exacted justice with this gun. The auction house rather elaborately described it as, “An American legend made manifest, this iconic piece of history and mythology memorializes both the outlaw spirit and justice, encapsulating the notion of the code of the West.” In the end, someone ponied up $6 million for it. 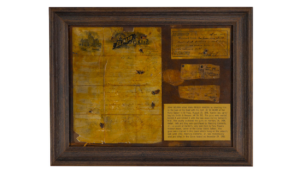 Staying on the Wild West theme, this framed display case holds the heavily shellacked original documentation of the weapons tagged “Exhibit A” and “Exhibit B” for use during the 1895 Hardin-Selman murder trial. If the names don’t ring a bell, John Wesley Hardin (1853-1895) was believed to have felled dozens of men before fourteen years in prison settled his temper. Until, that is, an El Paso police officer named John Selman tried to enforce the city’s gun ban and got an earful from Hardin. Selman bided his time but later shot Hardin while he was playing dice in a saloon. Selman went to trial, but was acquitted. According to the auctioneer, El Paso’s Coney Island Saloon long exhibited this makeshift reliquary, which sold for $6,375, with the guns “chained to this board.” 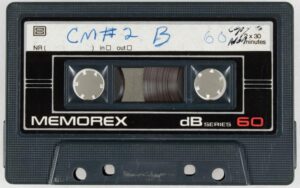 Throughout the year, a Maryland auction house has been unloading dozens of pieces of Manson “murderabilia,” including letters, postcards, and Monopoly money he autographed (for fans?). Manson, who died in 2017, had been locked up for life after he and his followers were found guilty of the brutal 1969 slaying of seven people, including actress Sharon Tate. One of the most intriguing auction lots is a cassette tape “completely filled with music and some rambling thoughts by Charles Manson, recorded by him while in prison.” It sold for $750. Other tapes, handwritten song lyrics, and a cassette recorder once owned by the villain had previously been sold. 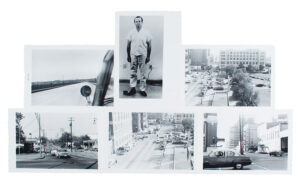 Relentless collector interest in John F. Kennedy spurs the sale of many letters and artifacts related to the slain president. This year, a small group of unpublished crime scene investigation photographs related to JFK’s 1963 assassination realized $753 at auction. The images were, according to the auctioneer, “reportedly recovered after being discarded by the Dallas Police Department,” and include Lee Harvey Oswald’s theorized getaway route; the surrounding area of the Tippit scene; the view from the ‘sniper’s nest’ window at the Texas School Book Depository; and a mug shot of Oswald’s assassin, Jack Ruby. 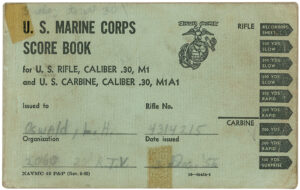 As alluded to above, JFK continues to haunt our collective psyches—isn’t that QAnon cult still waiting for him to rise from the dead?—and while not *directly* related to his slaying, a particularly chilling piece of ephemera raised $75,000 at auction last month. What was it? An 80-page “Score Book” filled out by Oswald as he completed his Marine Corps training in rifle and carbine shooting in 1956. His attainment of sharpshooter status, and indeed this very booklet, would be used as evidence against him by the Warren Commission. 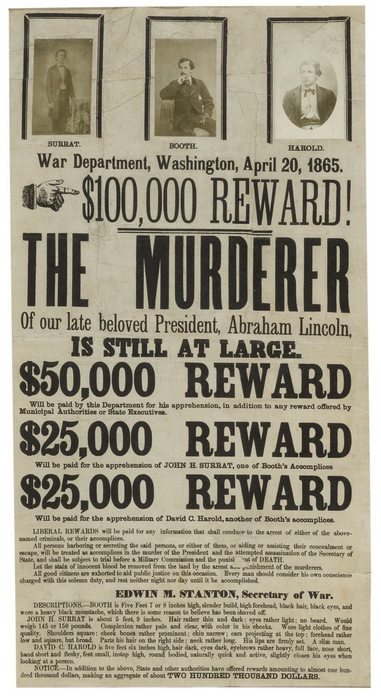 One more in the category of assassination memorabilia: an original 1865 poster offering a $100,000 reward for the apprehension of John Wilkes Booth and his co-conspirators for their role in the murder of President Abraham Lincoln. In the one pictured here, which sold for $214,200, someone later added silver gelatin photographs of Booth, John H. Surratt, and David C. Herold to the blank frames at top. The public was urged to “aid public justice on this occasion.” As it turned out, thirty soldiers and detectives had to split the bounty after Booth was shot, Herold hanged, and Surratt released. 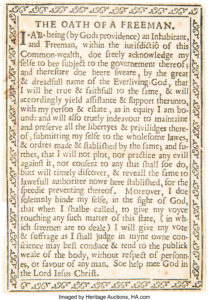 Those who watched Murder Among the Mormons on Netflix earlier this year will be familiar with the tale of Mark Hofmann, a Salt Lake City dealer of rare books and historical documents turned forger turned murderer. In 1985, he fooled a lot of very knowledgeable people into believing that his handmade facsimile of “The Oath of a Freeman,” a document printed in Massachusetts in 1638 or 1639, of which no genuine copy survives, was the real thing. Hofmann’s lies eventually caught up with him, sadly not before he planted two pipe bombs, killing two acquaintances. He is currently serving a life sentence. As for the “Oath,” it was purchased by a private collector for $52,500 and handed over to New York’s Grolier Club. 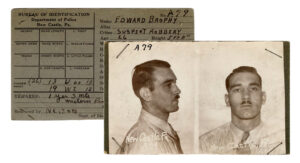 Albums of mug shots appear in auction catalogues with increasing regularity. Pictured here is a 26-year-old robbery suspect from New Castle, Pennsylvania, arrested on August 19, 1928. His was one of 156 criminals, ca. 1926-1959, whose photographs and basic identifying information were grouped together in a binder that sold this past summer for $1,000. The mugs of the accused from San Francisco, New York, and London were also on offer this year—the latter a fascinating album dated to 1895-1916 that did not sell.

The Illustrated Police News, Law-Courts and Weekly Record was a lurid, 16-page periodical published in Boston that sensationalized the crimes of the day (and was devoured by the reading public). The bound volume that recently sold at auction for $1,125 held 28 issues dating from the weeks of November 5, 1892 to November 4, 1893. The December 31, 1892 cover image depicts a Philadelphia love triangle that ended with an axe murder. On other pages, two women brawl over politics, and a knife fight erupts between “backwoodsmen” in the Cascade Mountains over the “only woman in the county.”

Inside the Murderabilia Machine

Murderauction.com is an online auction, where the site’s thousands of users buy and sell “murderabilia” 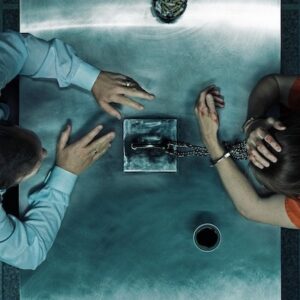 When you start out as a special agent for the FBI and get your first field office assignment, you’re pretty naive about...
© LitHub
Back to top