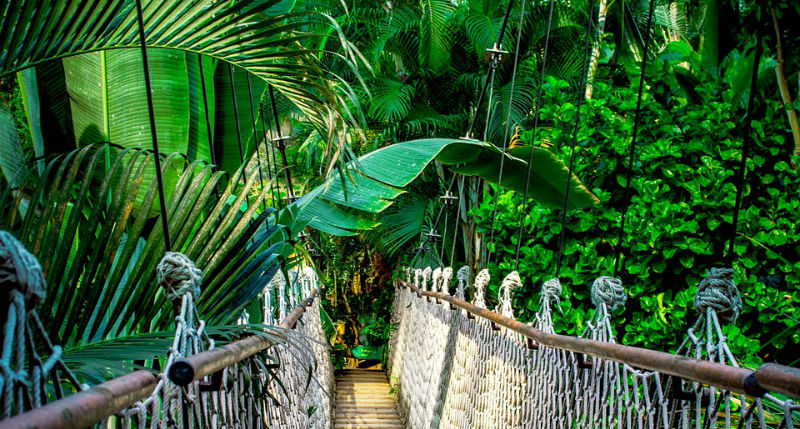 A Literary Journey to the Amazon

8 Books That Explore the World's Most Awe-Inspiring Jungle

The inspiration and genesis of my novel, Into the Jungle, was my friend Pamela Rickenbach, who shared with me an almost unbelievable story about her troubled upbringing. A foster kid all her life, she bounced from placement to placement, finally following her last foster family to Bolivia at age sixteen. It was there she met a native man and fell in love, ultimately following him to his remote jungle village in the Amazon rainforest. She didn’t come back to the states until she was twenty-six years old.

I related to her “lost-ness” as a young woman. I didn’t have it as bad as she did, but I left home at sixteen, traveling aimlessly around Europe for a couple of years, at times getting into some really dangerous situations via my own youthfulness and naivete. I know that I was looking for a home, because my “home of origin” never felt like one, and it was one I couldn’t wait to leave. It just turned out to be harder than I thought to find a place where I felt at peace, where I felt loved, where I had a community. I’m still working on that, as perhaps many of us are.

From the germ of Pam’s unique coming-of-age story came my protagonist Lily, who must use everything in her power to survive and eventually thrive in a completely foreign environment. My excitement about my story grew in the early days of developing the idea for this novel, but so did my realization that I knew exactly nothing about the rainforest. The jungle is an iconic place, yet it’s so distant from most of our realities that it’s often reduced to mindless metaphors: it’s a jungle out there, the jungle of the mind, the heart and so on. But what about the real jungle, a place few of us have been? What makes it so terrifying, unique, inspiring, otherworldly?

In 2017, I decided to embark on a month-long research trip to the Peruvian Amazon. To prepare, I wanted to be taken there by the written word—so I scared up every book on the jungle I could get my hands on. Here are a few—novels and nonfiction—that made me feel the sweltering heat, taste the freshly grilled tapir meat, hear the jaguars huffing in the manioc fields… 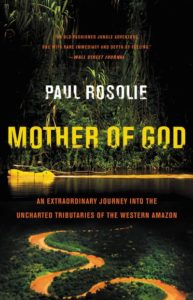 Mother of God, by Paul Rosolie

A passionate and engaging read by a man who fell in love with the Amazon in 2006 at age eighteen, disappearing himself deeper in the Madre de Dios—Mother of God—region of Peru, more than perhaps any Western person ever has, seeking a glimpse of isolated tribes, wrestling 35+ foot anacondas, encountering giant anteaters and massive, ancient turtles. The great cry of this book is love for this wild world along with the timely question, how much longer can it survive human greed in the form of poachers, corporate giants, and gold miners? 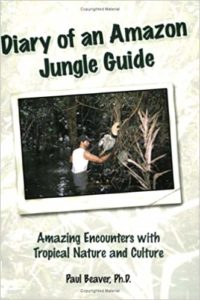 In Peru in the early ‘80s, biologist Dr. Paul Beaver established Amazonia Expeditions, now a beloved lodge a hundred miles down the Amazon from Iquitos, Peru. His book: engaging, funny, warm, with jaw-dropping jungle stories packed on every page—will take you deep into this otherworldly place full of puppy-sized spiders, giant Harpy eagles, and truck-length snakes, as well as acquaint you with the fascinating denizens of the rainforest—local people, indigenous tribes, and quirky shamans. He writes with humility, self-deprecating humor, and compassion, along with the perfect amount of science mixed in. 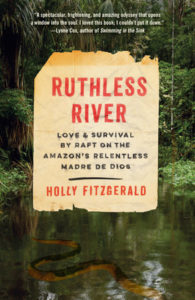 This is the stunning true survival story of a married couple, Holly and Fitz, who survive a plane crash in the Peruvian jungle in the early ‘70s. Setting off on the river with only a rickety raft at their disposal, they fought starvation, insects and predators, racing against time to navigate the deadly waters of the Amazon to find a river town before it was too late. 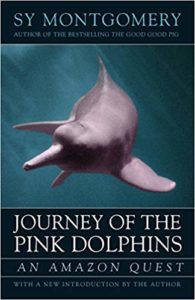 Journey of the Pink Dolphins, An Amazon Quest, by Sy Montgomery

“Part naturalist, part Emily Dickinson, part Indiana Jones,” as the Boston Globe calls her, Sy Montgomery has the mind, heart, and spirit of a modern day explorer. In pursuit of the pink dolphin, a rare freshwater species in the Peruvian and Bolivian Amazon, Sy reveals worlds within worlds: the river dolphins’ natural history, conservation pressures and their prehistoric origins, as well as the lives and beliefs of the river dwellers, some of who believe these creatures are shape-shifters, fantastical beings who live in the Encante, a magical world deep in the Amazon river. 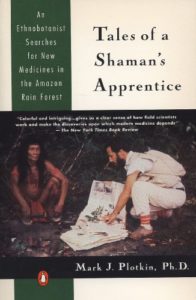 Tales of a Shaman’s Apprentice, by Mark J. Plotkin, Ph.D.

Do you want the absolute real deal on shamans, medicinal plants (in the Amazon there are over 60,000, used to cure everything from earaches to testicular cancer), and indigenous people of the Amazon voiced by someone who spent thirteen years living with them, deftly coaxing out their tightly held secrets; someone who is a passionate steward of the rainforest? This is your book. “The rainforests of the world,” Plotkin notes, “are our greatest natural resource, an intercultural pharmacy that can cure woes both known and yet unvisited.” A beautifully written, engaging masterpiece. 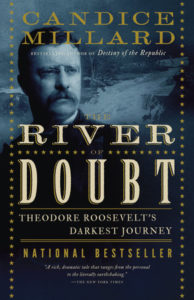 The River of Doubt, Candice Mallard

In 1912, Theodore Roosevelt, along with a small crew, set out on a dangerous journey down an unmapped, rapids-choked tributary of the Amazon. He was woefully unprepared for the mortal dangers that awaited himself and his men, enduring starvation, Indian attack, relentless insects, and disease, bringing Roosevelt himself to consider suicide. A riveting book told with unparalleled storytelling skill by the magnificent Candice Mallard. 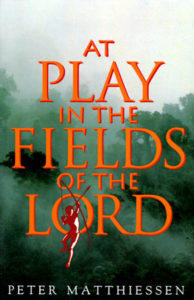 At Play in the Fields of the Lord, by Peter Matthiessen

This is a brilliantly plotted classic about two sets of missionaries out to spread the word of God in the South American rain forest. There they clash with a couple of rootless mercenaries, the local law, and each other. Peter Matthiessen, whom we lost in 2014, spent years traveling in South America; living, breathing and documenting the place. A phenomenal novelist as well as non-fiction writer, he will take you to places—in all his books—most of us will never dare to go. 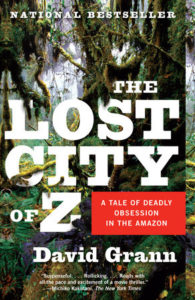 The Lost City of Z, A Tale of Deadly Obsession in the Amazon, David Grann

David Grann tells the story of British explorer Percy Fawcett’s 1925 ill-fated journey to find a lost civilization in the Amazon with a novelist’s skill for suspense and intrigue. Since Fawcett’s journey, countless others have attempted the same trek, many of them swallowed by the jungle itself, or captured by tribes. Crammed with vivid detail and stunning descriptions of the perils and wonders of the Amazon jungle, this book will transport you—from the comfort of your chair—into the jungle’s “green hell.”

Erica Ferencik is a graduate of the MFA program in Creative Writing at Boston University. Her work has appeared in Salon and The Boston Globe, as well as on National Public Radio. To research The River at Night, Into the Jungle, and her upcoming thriller GIRL IN ICE, which Scout Press, an imprint of Simon & Schuster, will publish in March 2022, she ventured deep into the remote forests of the Allagash Territory in northern Maine, rafted the Amazon River in the jungles of Peru, and explored the desolate iceberg-packed fjords of Greenland.
http://EricaFerencik.com

On Chicago, and the Joys and Agonies of Choosing a Setting for Your Crime Novel

John Douglas on His Life's Work: Talking with Killers 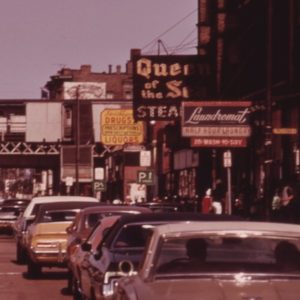 On Chicago, and the Joys and Agonies of Choosing a Setting for Your Crime Novel

I was honored to sit on a writers’ panel not long ago where the moderator asked an interesting question: “If you walked...
© LitHub
Back to top