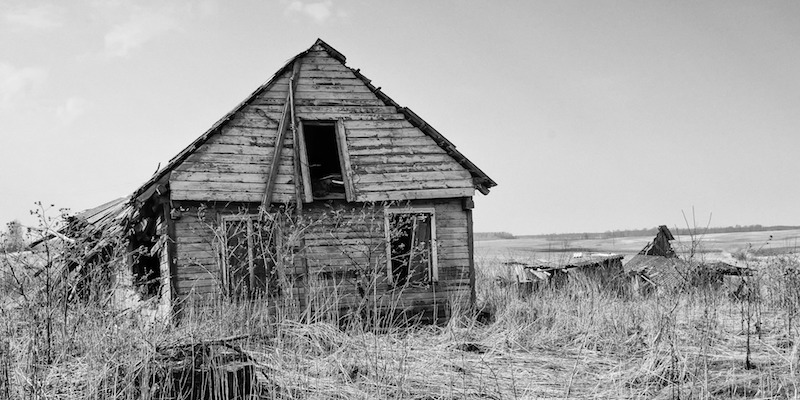 A Murder in the Family

150 Years After, Making Sense of a Family Crime

We pull off the side of Tama Road and park. It’s something you can do in the country. Just park and get out. The nearest house is a quarter of a mile away. The one before us stands alone, choked with weeds and bushes. There’s a rusted iron gatepost, though no fence and no walk, not even what you’d consider a lawn. Just weeds, kept under control by a tractor with a mowing rig tagging along behind. We loop around to the east side of the house. Two windows have been nailed up with particle board, blasted by the sun and rain and wind into the same gray as the original wood siding, itself barely clinging to a rumor of white paint. We approach the open window at the back, careful of the tangle of weeds and young trees growing here where the mower doesn’t reach. The glass is gone—there’s something in an abandoned house that doesn’t like glass—and the window is inverted, with the upper sash pulled down.

Of course, we’re trespassing, though it’s clear no one has lived here for years and years. My companions and I are linked by blood, vaguely, but more directly by this house. Or at least by a girl who once lived in the house, a girl who lost her life at age thirteen in a gruesome rape committed within sight of where we stand. Probably. Nothing is certain in this case. The house is in the right place, and it looks to be of the right vintage. Beyond that we’re guessing, as always. A little leap into the unknown past.

Working on Outrage in Ohio: A Rural Murder, Lynching, and Mystery was something like this visit to murder victim Mary Secaur’s house. Separated by 146 years from the events of the case, I waded through the weeds of time and neglect, looking for some tangible, definite connection.

Outrage in Ohio began with a letter not even addressed to me. Back in the mid-1990s, my father, like many newly retired people do, turned to genealogy after his retirement. And in those days before the Internet really took off, he sent out letters—stamps and everything—to his Kimmel relatives, asking for information about their ancestors. Among a cousin’s long list of facts and dates about grandparents, great-grandparents, and great-great-great-great-great-grandparents, Dad read a paragraph about a murder, a lynching, and a confession, all happening back in 1872 in the western-Ohio county where he had grown up.

That paragraph was enough to pique my father’s interest, and he wrote away again for more information, more contacts. Eventually he connected with a genealogist in Fort Wayne, Indiana, who shared Dad’s interest in the case and sent him a copy of James H. Day’s book, Lynched!, published just after the crimes. Dad sent me a copy of the book with a warning—expressed in typical German-American understatement—that it wouldn’t make for pleasant reading.

Separated by 146 years from the events of the case, I waded through the weeds of time and neglect, looking for some tangible, definite connection.

He was right. Day’s book outlines the basics of the case, mixing hard facts, witness testimony, and flat-out attacks upon the suspects. The details of the crimes were bad: the rape and murder of a thirteen-year-old girl; the lynching of two suspects, one of whom was probably developmentally disabled; and the brush with death of another suspect, who just missed joining his brother and their friend at the end of ropes.

But what captured my interest the most was Day’s verbal assault on the Kimmel family and on my great-great-great grandfather, Henry Kimmel. The portrayal of the Kimmels simply didn’t fit any of the Kimmels that I knew back in Western Ohio, not my father nor his parents nor his aunts and uncles. The Kimmels I knew were all wonderfully kind, hard-working Christian people—a far cry from the violent, drunken thugs described by Day. But what if Day were right? From what kind of people did I descend?

I decided to seek answers, but how to uncover the facts when separated by so much time and by the knowledge that people like Henry and Susan Kimmel—original settlers of the land, hardscrabble farmers who worked hard to feed and clothe eleven children, illiterate to boot—weren’t likely to have left their own version of events for history to discover? I haunted county courthouses, historical societies, and library microfilm collections for contemporary newspaper accounts, census records, tax records, land records. I interviewed my father’s aunt and uncle, hoping to find any family lore about the case. I also made contacts in the county who were able to provide me with access to an unpublished—and largely unknown—first-hand account of the lynching and to a locket—complete with a lock of hair—worn by the victim in the only known photograph of her. At one point, my wife and I found ourselves standing beside the victim’s headstone with direct descendants of Mary’s twin brother, Marion, and of a neighbor of Mary’s who reportedly helped to pull the ropes during the lynching. In my dealings with people in Mercer County and beyond, I was met with curiosity and helpful cooperation.

Article continues after advertisement
Part of what I discovered about the Kimmels was unsettling and explained at least some of their bad press.

Part of what I discovered about the Kimmels was unsettling and explained at least some of their bad press. Henry Kimmel was twice charged with assault and battery. The first case, occurring around the birth of his developmentally disabled son, was quashed, but the second case, just a year before the murder and lynchings and involving a neighbor, resulted in a conviction. In my research and writing, I sought out as many facts as I could find to help me understand the family and its place in the community. They may have been bad folks, and they were certainly rough settler types. Eventually my leads petered out, and I found myself staring into the rooms of the past, blocked from entrance by the intervening years, the deaths of the participants and witnesses, and the destruction of evidence, even of locations associated with the case.

At such points, I made imaginative moves across thresholds, recreating events and conversations that were incompletely recorded or, most likely, not recorded at all. I made sure to explain to my readers the sources of every narrative—historical or fictional—and I took pains to explain when and why I departed from the historical and switched to the fictional. This care was more than simply professionalism. From the beginning of this project, I felt a responsibility toward both my family and the members of the Mercer County community to be fair and just in my portrayals and analyses of people and events. I especially owe this respect to Mary Secaur, herself, which is why I have put flowers on her grave every Memorial weekend for over a decade and a half.

I have spoken about and read from Outrage in Ohio twice in Mercer County since the publication of the book. Both talks were well-attended, and the audience showed a lively interest in the case, asking probing questions and sometimes providing alternative theories and oral accounts. I have met direct descendants of the county’s influential newspaper publisher, the sheriff who prosecuted the case, and the neighbor I believe spread libelous statements about the Kimmel family. All have been respectful of me and my work and grateful to have learned more about a case that lingers on in the group memory of the county.

The growth at the back of the house prevents me from heading any further in that direction, so I return to the front. Gingerly stepping over the debris of the collapsed porch, I make my way to the front door, which stands open, inviting me to step inside. Looking into the gloom, I see a central hallway, a stairway, a door, some frosted windows. I am strongly tempted to enter the front door. The floorboards look sturdy enough, and the stairway looks like it could handle my weight. But my companions and I are not alone at the house. Through the doorway comes a loud humming. Somewhere in there are bees, and I’d very much like to avoid finding them. Discretion ends up defeating valour, and I give up the notion. As we walk back to the car, I think about how we can catch glimpses of the past, how we can recreate something of the past, but we can never go in.

David Kimmel is a descendant of one of the suspects in the Secaur murder. He is an award-winning professor of English at Heidelberg University in Tiffin, Ohio, where he investigates the boundary between historical writing and historical fiction. Outrage in Ohio is his debut work. 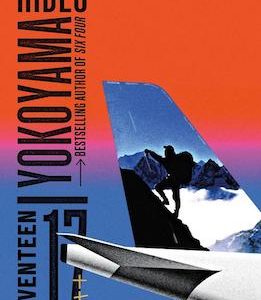 By six o'clock that evening, all the editorial staff were in turmoil. Yuuki was sitting at the political editor's desk,...
© LitHub
Back to top