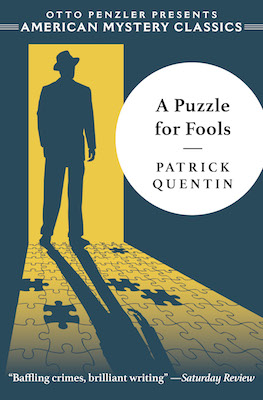 The following is an exclusive excerpt from A Puzzle for Fools, a newly unearthed Peter Duluth mystery by Patrick Quentin, which finds our protagonist responsibly treating his alcoholism at a rehab center when a staff member—and then a patient—turn up dead.

It always got worse at night. And that particular night was the first time they had left me without any kind of dope to help me sleep.

Moreno, the psychiatrist in charge, had given me one of those dark, impatient looks of his and said: “You’ve got to start standing on your own feet again, Mr. Duluth. We’ve coddled you long enough.”

I told him he didn’t make sense; that surely I paid enough per week to cover the expense of a triple bromide. I pleaded; I argued; finally I got fighting mad and vented on him that remarkable vocabulary which is vouchsafed only to alcoholics who have been shut up for a couple of weeks without liquor. But Moreno just shrugged, as much as to say:

“These drunks are more trouble than they’re worth.”

I had started to swear again and then I thought: “What’s the use?” I couldn’t tell him the real reason why I wanted dope. I wasn’t going to admit that I was afraid; blindly, horribly afraid, like a kid that’s going to be left alone in the dark.

On the outside I had been drinking to an eight-hour-a-day schedule for close on two years. That was how it got me after that fire in the theatre which had killed Magdalene. But a quart a day doesn’t mix with a working man’s life. In my few lucid moments I had begun to realize that my friends were getting tired of being sorry for me; that I was throwing down the hatch what reputation I had built up as New York’s youngest theatrical producer, and that, if I went on, I should soon be ringing down the curtain on the tragi-farce of my own life.

I wasn’t particularly reluctant to drink myself to death. In fact I was prepared to go merrily and deliberately to hell. But one of those things happened. On the day of its publication, thirteen friends presented me with thirteen copies of Bill Seabrook’s Asylum. It was a gentle hint which even I couldn’t overlook. I skimmed the book and discovered the comparative delights of a sanitarium cure. In a moment of impulsive determination, I made the great gesture. I disembarrassed Broadway of a tiresome drunk and threw myself on the tender mercies of the well-known and discreetly titled Sanitarium of Dr. Lenz.

It wasn’t a sanitarium really. It was just an expensive nuthouse for people like me who had lost control.

Doctor Lenz was a modern psychiatrist with a capital PSY. After a brief period of tapering off, I had spent three liquorless weeks taking hell and giving it to the poor devils who looked after me. Hydrotherapy, physical jerks, and sun-ray treatments had been sandwiched between unsuccessful attempts to sock male attendants on the jaw and occasional maudlin passes at pretty nurses. I had been one of the least attractive types of soaks, but I was making progress.

At least, that was what Miss Brush, the beautiful day nurse, had told me that afternoon. I guess that was why they had taken me off sleeping powders.

It wasn’t a sanitarium really. It was just an expensive nuthouse for people like me who had lost control.

All I needed now, she had said, was the will to pull through. Long after Doctor Moreno had gone, I lay in bed trembling and jittery, thinking it would be quite a while before I had any will at all.

I don’t know whether all drunks get the same symptoms, but without stimulants or sedatives, I just felt scared. And it wasn’t a question of pink rats or purple elephants. It was just this frightful fear of being left alone in the dark; the violent need of someone to hold my hand and say: “It’s all right, Peter, I’m here. It’s all right.”

I might have told myself that there was nothing tangible to be afraid of. I knew all the nuts around me. They were perfectly harmless, less dangerous, perhaps, than I. My room or cell or whatever you call it, was comfortable, and the door was open. Mrs. Fogarty, the night nurse, was in her little alcove at the end of the passage. All I had to do was to summon her through the house telephone at my bedside, and she would come rustling in like a horse-faced Florence Nightingale.

And somehow I could not pick up the receiver. I was ashamed to tell her that I was so scared of the vague shadow of the wash basin spigots on the white wall, that I had to use every ounce of will power to keep my eyes from that side of the room. And I was not going to tell her that the corroding memory of Magdalene being burned to death almost before my eyes kept flashing blindingly through my mind like the recurrent theme of a nightmare.

I shifted in the narrow, antiseptic bed, turning my face toward the comforting blackness of the inner wall. I would have given anything for a cigarette, but we weren’t allowed to smoke in bed, and they didn’t trust us with matches anyway. It was very quiet. Some nights old Laribee in the room next door would mumble last year’s stock prices in his sleep. But there was nothing like that now.

I was lying there, straining my ears at the silence, when I heard the voice. It was faint, but very clear.

I lay absolutely motionless, caught up in a stillness of panic far worse than mere physical fear. The voice seemed to have come from the window. But I couldn’t think of things like that at the moment. All I knew—and it dawned on me with sickening clarity—was that the voice I had heard so distinctly was my own voice. I listened and it came again, my own voice whispering:

For a moment I knew that I really had gone mad. I was talking to myself and yet I couldn’t feel my lips move. I had no sense of speaking. With a sudden, desperate motion, I lifted a quivering hand to my mouth and held it tightly across my lips. At least I could stop myself; stop that quiet, dreadful sound.

“You’ve got to get away, Peter Duluth.”

“There will be murder.”

From A PUZZLE FOR FOOLS. Used with the permission of the publisher, Penzler Publishers. Copyright © 2019 by Patrick Quentin. 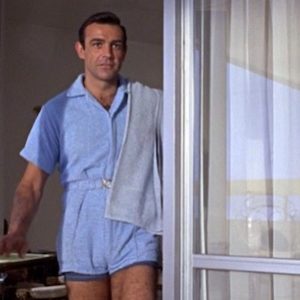 CrimeReads Brief: Week of March 23, 2019 "I don't want that to be my life. I want to be something positive." Amanda Knox talks past traumas and future...
© LitHub
Back to top