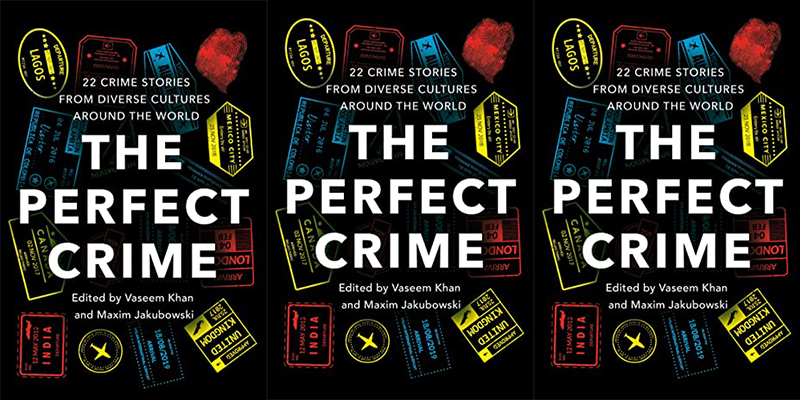 A Roundtable Discussion on Growing Diversity in Crime Writing

Contributors to a new anthology reflect on an ever-expanding genre.

I was for several years Chair of judges for the Crime Writers’ Association Dagger for first novels, and was struck how many new authors of talent were increasingly emerging from diverse backgrounds—not just in Britain but all over the English-speaking world. This became the inspiration for putting together ‘The Perfect Crime’ anthology. Once I had brought my fellow CWA board member Vaseem Khan on board, it became evident we should look as far as we could to reflect that wonderful diversity. We cast our net far and wide and invited not just  pioneers amongst authors of color, but also writers of Asian, African, and indigenous descent from all over the world.

In this respect, we modestly believe the collection is a milestone in demonstrating how far the crime genre has changed over the past few decades in both attitude and themes. We did not specifically ask our contributors to address the subjects of race or diversity in their new stories, although some masterfully took advantage of the opportunity, just to come up with a great new yarn. And we believe they genuinely came up trumps.

We asked some of the writers involved to discuss the inspiration behind their respective stories and their perspective on growing diversity within the wide spectrum of contemporary mystery writing.

Vaseem Khan: As a co-editor and contributor to this anthology my perspective on the diversity debate is straightforward. The world is changing. A new generation of readers are emerging who live in globalised, interconnected societies and thus demand diverse content. Similarly, many traditional readers, for want of a better phrase, are increasingly willing to take risks. My own opinion is that the industry is making a genuine effort. Talking to people across publishing, I’m convinced that change is an important part of their agenda.

My short story, DEATH IN DARJEELING, features characters from my Malabar House novels (beginning with Midnight at Malabar House), set in 1950s Bombay, just a few years after Indian Independence and the end of Britain’s colonial enterprise on the subcontinent. Following the demise of the Raj, many Englishmen remained in India – it was the only home they had known. Against a backdrop of changing Anglo-Indian relations, both sides – coloniser and colonised – were forced to adopt a new outlook towards one another. A painful exercise, in some cases. But, as my novels attempt to show, many met the challenge head on.

Today, as we grapple with diversity and inclusivity in our modern world, there is hope in this, and lessons to be learned.

Sanjida Kay: I’m mixed race – Irish-Bangladeshi – and grew up with two Irish parents in England, Wales and Ireland for most of my life. What I’ve experienced growing up – being classed as and treated as ‘other’, whilst simultaneously feeling very British, and yet also feeling like an outsider – is something I’ve explored tangentially in most of my fiction.

In my short story, The Beautiful Game, the main character, Selene Jackson, was born and brought up in Manchester by a white mother and with two white half-sisters. She herself is mixed race, half Nigerian, as is her football legend boyfriend, Luke Allard, who is half French. Because of how Selene looks, people treat her differently from her sisters, as if she’s an exotic import; they assume she’s not intelligent and they push her towards a career as a model and a WAG (wife or girlfriend of a British football player). Yet what is as important as her ethnicity is her poverty. She and Luke both lived on welfare, received benefits, grew up with a single mum in a council flat and had to go to food banks. For Luke, his ability to achieve fame and wealth beyond most people’s wildest dreams, is by becoming a Premier League player for Manchester United. For Selene, dealing with sexual inequality in addition to racism and poverty, her get-out-of-jail card could be by being in a relationship with a man like Luke, as dangerous as that could turn out to be…

For me race and privilege are interlinked, but the relationship between the two is far more complex than simply assuming that the colour of a person’s skin determines who they are and their ability to reach their true potential.

Ausma Zehanat Khan: For my story, The Yellow Line, I returned to my series detective Esa Khattak to helm the story, though it’s primarily told through the point of view of a hijab-wearing woman named Haniya. I love having Muslim characters headline my stories because we so rarely see them in crime fiction or political thrillers except as terrorists or as an oppressed underclass. After reading crime fiction all my life and rarely seeing a character I could identify with, it was in many ways a relief to write characters like Esa and Haniya. It allowed me to reclaim the narrative about the communities I come from, to confound expectations about who these characters are and the unique challenges they face.

As a woman who is frequently harassed for wearing the hijab, Haniya might easily have come across as a victim without agency or as a woman who needs a man to speak for her. She isn’t and she doesn’t, but the way she seizes that agency to fight back against a stalker is subversive and morally questionable, speaking against type as it’s so often presented in the dominant discourse. I was tired of stories about Muslims and South Asians, where they even existed, that lacked authenticity or nuance. Stories from the outside rarely tell the whole truth and often frame our communities in devastating ways that contribute to the climate I write about in The Yellow Line. Diverse representation in fiction puts power back in our hands, and allows us to speak for ourselves.

Imran Mahmood: In my short story ‘The Button Man’, I wanted to glance into the life of a sociopathic serial killer. There is so much fascination about sociopaths today, especially those vanishingly few (thankfully) who go on to become serial killers. It is as if by understanding a person whose psyche is at the extreme end of the humanity spectrum, we might begin to understand the worst and best of our own natures. But what of the person under the microscope? What might it feel like to him, to be flung to the outer-edges by society’s spectrometer? Is it to further de-socialise a sub-socialised person? Is it a rejection of a person by the use of just another metric? Is it the last of the acceptable discriminations?

There is a sadness about Daniel, this relentless, selfish, dangerous, unfeeling killer. The sadness isn’t his – he doesn’t appear to notice it for himself. The sadness is that he is so interested in and fascinated by the detail of other people’s lives. He is mesmerised by us. And we are disgusted by him. In writing it I was left with the sense that if we could build a bridge to reach him, then we might just reach him. And if we did that – who knows what horrors we might avert. Daniel is of course the most extreme of examples. He’s so far from our grasp. We are so different. But I often think about unbalanced relationships. The wealthy and the poor. The privileged and the marginalised. Those who belong and how they interact with those to whom they deny belonging. And ultimately I wonder whether when we other the other, we do more than other them? Whether in fact we other ourselves.

David Heska Wanbli Weiden: As an Indigenous writer, representation is important to me, as we don’t see enough portrayals of modern Native life in the media. Happily, this is changing, as there are some great television series that have aired recently—the fantastic Reservation Dogs being just one example. I’ve also been delighted to see more Native crime fiction published, including tremendous new books by Ramona Emerson and Marcie Rendon. So, when I was asked by Maxim Jakubowski and Vaseem Khan to submit a story to The Perfect Crime, I accepted immediately.

I knew I wanted to set the story on the Rosebud Reservation in South Dakota (the locale for my debut novel, Winter Counts), but I felt I needed a new character, as I’d written several other short stories recently featuring my protagonist, Virgil Wounded Horse. So, I dreamed up Pudge Iron Shell, a former high school football star who now sells bootleg liquor on the reservation. I knew that the concept of reservation bootlegging would not be familiar to many non-Native readers. This form of bootlegging—sometimes called rum running—was common during Prohibition, but continues today in some areas. Rather than brewing batches of moonshine hooch in the woods, bootlegging in this context involves purchasing liquor across state lines and selling it for a profit on the rez, as many reservations ban liquor sales. In the story, Pudge is an ethical bootlegger, as he won’t sell to kids or take advantage of customers, but his business is threatened by a gang from the nearby Pine Ridge Reservation.

I had a lot of fun writing “Hooch,” and I liked Pudge so much that I’ve included him in my forthcoming novel, Wisdom Corner, the sequel to Winter Counts. Furthermore, it was gratifying to write about some aspects of Lakota life that are not well known, such as the friendly—and sometimes not so friendly—rivalry between the Sicangu and Oglala nations in South Dakota. In the end, it was important to me to write a story that would keep readers turning the pages, but also reflect the complexity, complications, and joys of reservation life.

Amer Anwar: I was an avid reader ever since I learned to read but, in all the books I read growing up, I never saw any characters like myself or my friends. I didn’t really think about it at the time – I just enjoyed the great stories I was reading – but, as a reader, you put yourself in the position of the characters in the story, and nearly all the characters I was reading about were white. I guess at some point I began to wonder why there weren’t any characters like me in any of those books.

Then, in my early twenties, I read Devil in a Blue Dress by Walter Mosley and that changed everything for me. For the first time, I saw a character of colour as the main protagonist in a mystery thriller, the kind of book I loved to read. He wasn’t a cop but someone who could move and operate within a particular section of society because he was part of it. That got me thinking; if you could do that with a character in 1940s LA then, surely, it’d be possible to do something similar set in contemporary west London. That part of west London is a rich, vibrant place, with great real-life characters and lots of inspiration and material for stories.

I waited years for someone to do it. When no one did, I eventually decided to try and do it myself, write the kind of story I wanted to read. 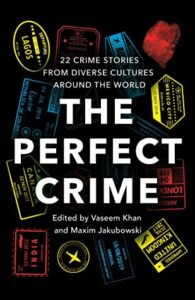 Vaseem Khan is a British writer, author of the Baby Ganesh Detective Agency novels and the Inspector Persis Wadia series. These are published by Hodder. Maxim Jakubowski is a crime and science fiction writer and critic, who is now chair of the CWA. 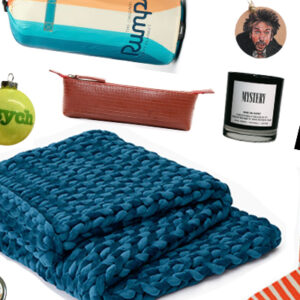 Hello CrimeReaders! It's the Holiday season, which, according to all my local stores' playlist designers, begins right after...
© LitHub
Back to top