Years ago, when my elder son was not yet a year old and my mother was still alive, the three of us took the smallest of Martha’s Vineyard ferries from Falmouth to Edgartown, that classic clutch of Federal clapboard and shingle houses overlooking Chappaquiddick, on a glorious July day. I remember us being the only three passengers on the boat, although that can’t be right. There must have been others. I remember it this way because the one picture I have of my mother that day, cradling Sam, she’s all alone in a seat near the bow. It was a classic blue-sky summer morning on the Sound, with just enough chop to convey the sense of bucketing speed. We ducked our heads when the spray fanned over the prow. I wore a light silk skirt that skimmed my ankles and dipped into the bilge. But I was appearing as an author that day and thought I should look dressy. I would be signing the second book in my Nantucket mystery series, Death in Rough Water, featuring police detective and island native, Meredith Folger.

Which is how I came to be sitting at a table positioned under a leafy tree on the front lawn of what was then Bickerton & Ripley, an iconic bookstore run by Dana Anderson and Marilyn Scheerbaum, a couple of warm and capable women who made Edgartown their home. My mother had disappeared somewhere on the town’s streets, gamely pushing a stroller with a sleeping infant in a blue sun suit and matching hat. Very few people stopped to look at my book, piled neatly beside me on the table, and those who did commented blankly: “It’s set on Nantucket? But this is the Vineyard,” before moving on. I felt awkward and self-conscious, being new to this game and aware that most of the passersby were avoiding my eyes and my tentative smile, terrified I might bully them into buying a novel from the wrong island. I had no idea just how fierce and exclusive the loyalties of Vineyard and Nantucket people could be.

But then a burly guy in a stained navy polo shirt and a swordfisher’s cap, the hair on his muscled forearms silver-white, slowed in front of the store and turned over Rough Water to read the blurbs on the back. “You’re Francine?” he demanded.

“Phil!” Dana cried, catapulting out of the bookstore and down the front path.

The fisherman threw his arm around the bookseller and smacked her cheek with a kiss.

“Were you out today?”

“Fishing for blues,” he nodded. “Just got off the boat. I haven’t showered yet.”

A complex perfume of diesel and sweat and salt spray emanated from his shirt. Dana waved a hand in dismissal. “Feel like signing some books?”

The man’s eyes strayed casually over my face. I’m sure after spending hours on the Sound he wanted a drink, and knowing what I know about him now, it was probably a cold beer or gin with a side of smoked bluefish pâté. But he took pity on me, instead.

He sat down and drew an immediate crowd, grinning, laughing, telling jokes, lifting his long-billed cap from his silver head and settling it more firmly on his brow. He signed books with a flourish—Philip R. Craig authored nineteen detective novels set on Martha’s Vineyard, featuring ex-cop J.W. Jackson, and sold the film rights. Some of the people he drew irresistibly to our table asked me to sign my book, too. He threw that powerful arm around my shoulders and leaned in for a photograph. He made my day, and incidentally, Dana and Marilyn’s, too. An hour later I got up from my seat, my stack of books mostly gone, and thanked him profusely for his kindness.

Phil Craig shrugged. Lifted his hand in a casual farewell. Ambled off into what seems now, in retrospect, his perfectly balanced life. I vowed to buy and read everything he’d ever written.

Later, I learned he grew up in Colorado. I live in Denver. He was a fencer in college; so was I. My first mystery, Death in the Off-Season, was published the same month as his fifth, entitled Off-Season. We probably could have had a few conversations over the years. But I never saw him again. 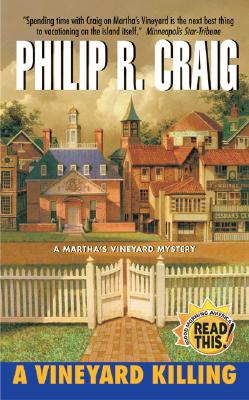 My son Sam is nearly twenty-six. My mother has been gone for a decade. Bickerton & Ripley has changed hands and names a few times, and Philip Craig passed away in the spring of 2007. After a hiatus of two decades and twenty-odd other novels, I’ve just published my sixth Meredith Folger Nantucket mystery, Death on Tuckernuck (Soho Crime). In this constricting moment of global pandemic, most of us are frantic for diversion and escape. Reading is pure flight. When I’m housebound in Colorado, yearning for salt spray and stiff breezes and damp, gray-shingled houses buffeted on the moors, I turn to a few trusted authors who capture the landscape of the Cape and Islands with deadly precision. Philip R. Craig, naturally, heads the list; begin with his first, and read on to his last. Then, try these other stellar authors. 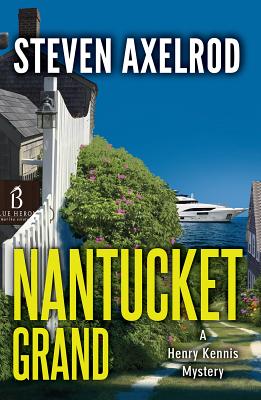 I enjoy spending time with Henry Kennis, the Nantucket chief of police who animates Steven Axelrod’s five novels set on the island (Poisoned Pen Press). Kennis dabbles in writing poetry, but his investigations are anything but lyrical, involving terrorist attacks, arson, drug-dealing and murder. Kennis is a single dad raising teenagers, too, with all the rueful love and exasperation that implies. The kids invariably complicate their dad’s official duties as well as his amours. Axelrod lives year-round on the island, and his portrait of Nantucket’s seasonal personalities is bracingly authentic. Smartly, however, his detective is a transplant from California—a classic outside observer, even as he manages the transgressions in his adopted home. Start at the beginning, with Nantucket Sawbuck, and move on from there. 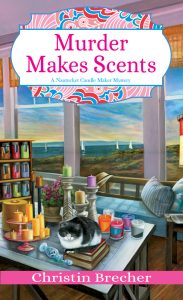 Christen Brecher’s take on Nantucket is a bit cozier that Axelrod’s. Her amateur sleuth, Stella Wright, owns a candle shop on the island, complete with cat, but she also has a burning passion for justice, as her second novel in the Nantucket Candlemaker Series, Murder Makes Scents, puts it. The forthcoming Stella, 15 Minutes of Flame (Kensington Books, August 2020) finds the candlemaker investigating the death of an 18th century Quaker woman whose body is discovered immured in a dilapidated house, just in time for Halloween. 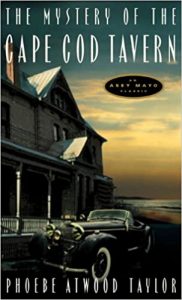 Seasoned mystery readers who love Cape Cod are undoubtedly familiar with Phoebe Atwood Taylor’s Golden Age mystery series featuring local resident Asey Mayo, who figures as a sort of New England homespun Sherlock Holmes. The stories and many of the cultural attitudes are dated, being set in the 1930s, but I mention them here for those who love this simpler, gentler time in mystery fiction; out of print for years, the series is now available for digital download. 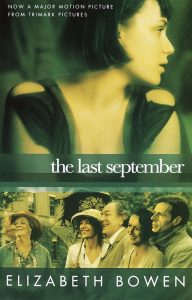 My favorite novel set on Cape Cod is Nina de Gramont’s The Last September (Algonquin), a haunting thriller that is also a love story and literary novel about a young woman’s emotional growth. Navigating a world of compelling and dangerous people, most of whom she loves but does not trust, Brett Mercier loses her flawed young husband to violent death. De Gramont is a beautifully understated writer who captures a tragic period in several lives, and the eternities of a Cape Cod autumn, with exquisite precision. 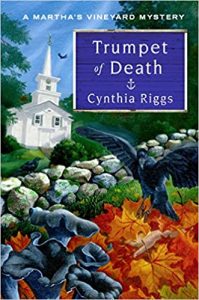 Cynthia Riggs’ Victoria Trumbell is a ninety-two year-old poet and Vineyard resident with a penchant for solving murders, who carries the reader through fourteen installments in a series of novels whimsically named for plants (Bloodroot, Poison Ivy, The Paperwhite Narcissus, The Beebalm Murders.) In her most recent outing, Widow’s Wreath (Crooked Lane Books), Victoria hosts a wedding on her Vineyard property that swiftly turns deadly; Kirkus called it “an exciting and twisted tale of hatred and family honor that will keep you guessing until the end.” Riggs is a thirteenth-generation Vineyard resident whose love for and knowledge of the island suffuse her prose; the matchless Victoria will carry you off immediately for the coziest chat about corpses you can imagine. 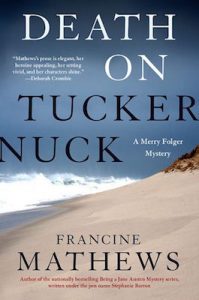 Francine Mathews, who also writes as Stephanie Barron, is the author of twenty-eight novels of mystery, espionage, and historical fiction. O Magazine named her Jane Austen Mystery Series as one “Every Thinking Woman Should Read,” while The New Yorker called Jack 1939 “the most deliciously high-concept thriller imaginable.” Her sixth Meredith Folger Nantucket mystery, Death on Tuckernuck, dropped May 5 from Soho Crime. 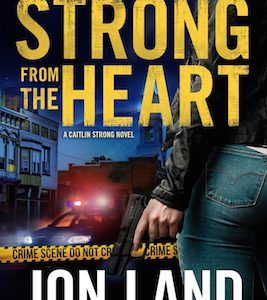 Southwest Texas “There is a house in New Orleans they call the rising sun.” As the famed song played in the single...
© LitHub
Back to top