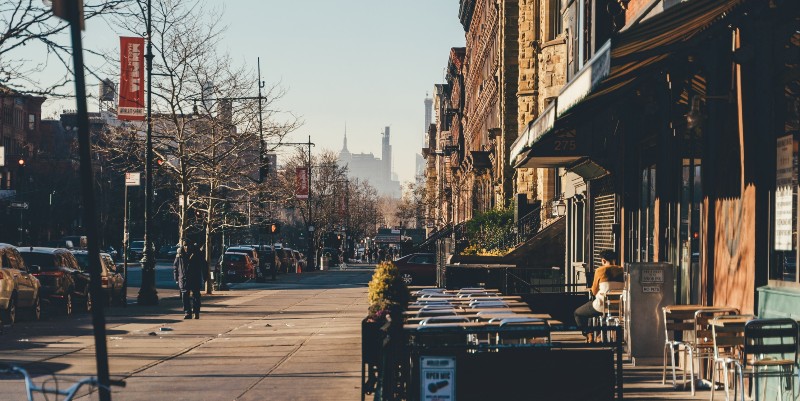 A Writer's Walk Through New York City During the Pandemic

An author observes a new reality and wonders how future books will reckon with it.

As I do whenever the weather permits, this morning I take a long walk through the West Harlem neighborhood where I’ve been living for the past six years. The neighborhood includes Sugar Hill and Striver’s Row, communities established during the Harlem Renaissance when Harlem was home to Zora Neal Hurston, Langston Hughes, Chester Himes and Iceberg Slim. That era long gone, West Harlem is now shared by Dominicans, Mexicans, Pakistanis and Africans, by students at nearby City College and gentrifiers fleeing downtown rents, and by African-Americans who’ve been dwelling here long enough to resent the intruders, one and all.

Ordinarily, the city’s restless energy fuels me, everyone out to make a buck, to survive in an environment that lifts me as I go, sharp as ozone. A fruit cart on one corner, run by a Turk, competes with a fruit stand run by a Dominican on the other. Far from the affluence of Manhattan below 96th Street, jewelry store windows display thick gold chains and skull pendants encrusted with gray-as-dishwater diamonds. Inconspicuous storefront churches can be found on almost every block, commonly sandwiched between bodegas, beauty supply stores and nail salons. There’s nothing elegant here. This is a neighborhood never visited by the tourists who flock to New York every year. Stripped of pretense, the streets are all the more vital for their absence. No glamour here, no panache, only hard work and hustle.

Not today, though. Today the sidewalks are all but empty and most stores shuttered. New York has withdrawn in the face of a strand of RNA, the onslaught of a virus, a something with no digestive system, no nervous system, no respiratory system, a something without even the will to live, a dead bundle of chemicals that only awaits the opportunity to kill you.

I’m on Amsterdam Avenue approaching a block between 148th and 149th Street. A cherry tree rises on each corner, so thick with baby-pink blossoms the branches are hidden. After a long, New York winter, they should be cause for celebration, as they have been, spring after spring. Now, they seem out of place, what with every storefront closed off by gray, corrugated shutters. I pass Parlay Hookah Restaurant, Ashley Beauty Salon, Day Spring Baptist Church, Revolucion Barber Shop, Marlenne Hair Studio and Swagger Fashions. The scene has the feel of a post-apocalyptic movie and I find myself expecting a pack of the living dead to round the corner.

There are 186,000 storefront businesses in New York. How many will reopen? How many of the 60,000,000 tourists who visited in 2019 will return? With the stock market losing four years of gains in a month, how many Wall Street strivers will be laid off? And what of New York’s 670 hotels? How many will survive without tourists to fill them? And Broadway, the city’s true heart? How many theaters have brought their curtains down for the last time?

My novel, All of Us, will be published in June. It embodies almost every element necessary to a successful crime thriller, a complex protagonist, two odious villains, a brutal murder in a seedy hotel, a police investigation that resembles an attack with a blunt implement, even a jaded psychiatrist who manipulates patients for his own amusement. But there is one thing lacking, one crucial element entirely missing.

All of Us is set in a Brooklyn neighborhood familiar to me. Even though change is the only real constant in New York, I counted on my descriptions being as accurate when I wrote the last sentence as when I wrote the first. And I was right. Very little changed over those six months and my setting was authentic, recognizable, an asset. Now, on the verge of publication after waves of editing, I can only hope readers will look past the obvious changes that have overtaken us.

Everything has changed, all at once, and we are left to estimate the quality and quantity of that change.

New York City, along with the rest of country, moved only gradually from the bad old days of the 1970’s and 80’s to the exuberance of the 2000’s. What we, as writers, now face has the feel of the 1929 stock market crash, or Pearl Harbor in 1941. Everything has changed, all at once, and we are left to estimate the quality and quantity of that change. What will New York (and the rest of America, urban and rural) be like a year or two from now?

I can’t do anything about All of Us, what with the June pub date. But what of the novel I’ve just finished, the novel begun eight months ago? My protagonist is a nurse. Worse yet, she works part-time in a nursing home. There’s no mention of the virus, of course, no multiple deaths, no elderly grandmothers and grandfathers carried off to hospitals, there to die alone. Can I publish this novel as is a year from now? If I do, will it have the feel, to the reader, of science fiction instead of crime fiction? Myself, I’m a bit of a stickler for authenticity. I don’t believe I’d be happy with a setting that did not at least mention the effects of Covid-19, especially in a nursing home.

Acknowledging a necessity to observe the new reality is one thing, anticipating the nature of that reality another. For those of us who remember the 1970’s, the graffitied subway cars and prostitutes outnumbering the tourists in Times Square, a return to that era seems both unimaginable and oddly inevitable. New York was broke then and it will likely be broke in the future. Along with the rest of the nation. Along with the rest of the world.

A headline in today’s New York Times reads: “Worst Economy in a Decade. What’s Next? Worst in Our Lifetime.”

I don’t have ready answers to any of the questions I’ve posed here, but I’m sure they’ll have to be faced. It’s difficult to imagine, for instance, a contemporary novel published in 1943 ignoring the war raging across the world. Even memoirs like Etta Shiber’s Paris Underground and literary novels like Arthur Koestler’s Arrival and Departure reflect the brutal reality. The Ship, God is my Co-Pilot and Upton Sinclair’s literary novel, Wide is the Gate, all reflect the conflict. And that’s not to mention Biggles Fails to Return.

On my way home, I stop in at the Key Food on Broadway. Barely large enough to be a minimarket compared to suburban supermarkets, it’s par for the course in West Harlem. The number of shoppers inside at any one time is limited and I have to stand in a little square marked with blue tape until my turn comes around. Then I head directly to the meat section at the back of the store. I’m too early and the cooler has yet to be refilled after the late shoppers emptied it last night. There’s a giant pork shoulder which I pass up—too big for my small family—and I settle for two pounds of ground chicken and a package of breakfast sausages. There are no eggs to be had, but I do get lucky in the paper goods aisle where a young man is stacking paper towels, then again in the produce aisle where the bins are stocked with the ingredients I need to make salads for the next few days.

The woman behind the cash register knows me well enough to smile when I lay out my food. She’s masked, of course, and her smile amounts to no more than a widening at the edges of the mask. I put a dollar in her little tip jar and remember to thank her for working. Her name is Yudelka and I know she has two young children. They’re at risk also, but there’s risk everywhere. And while the nurses and doctors in the emergency rooms, along with the paramedics who carry patients to them, deserve all the gratitude we can muster, we are also indebted to Yudelka and the many thousands of others who put themselves in harm’s way so that others can shelter in place. The debt extends to volunteers working in food pantries, many thousands throughout the country, to UPS, Fed Ex and Postal workers who drop packages at our door, to long distance truckers who carry our food from farm to table and risk contracting the virus a thousand miles from home and family. To millions of ordinary Americans. 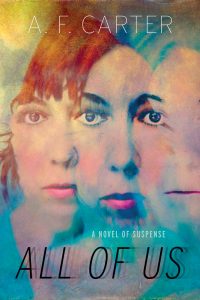 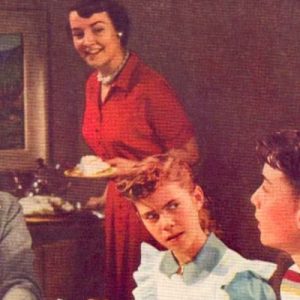 The intricacies of family relationships is something that has endlessly fascinated me. The seemingly limitless lengths we go to both...
© LitHub
Back to top