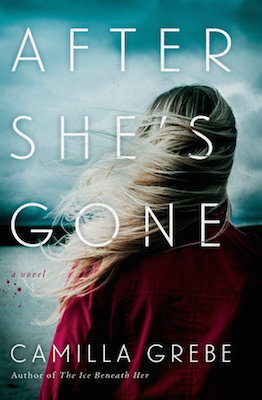 The following is an exclusive excerpt from After She’s Gone, the anticipated next installment in Camilla Grebe’s Hanne Lagerlind-Schon series. Named the Best Nordic Crime Novel of the Year by the Crime Writers of Scandinavia, Hanne, a psychological profiler, emerges from the forest in Sweden, her knowledge of who she is—and her investigation into a young woman’s murder—erased.

I love walking by myself in the woods. Especially in Mom’s clothes. I usually pretend I’m out on the town in Katrineholm, on my way to a bar or restaurant.

When I’m a few meters from the road, I stop. Close my eyes and try to enjoy this as much as I possibly can, because I will have to head back soon. Back to Ormberg’s prettiest house, back to the flat screen and massage chair and my bedroom with all the movie posters. Back to the fridge filled with fast food and an ice machine that works if you bang your fist against it a few times.

Back to Jake, who doesn’t have a dress or bra or high heels.

Cold raindrops fall on my head, flow down my neck and in between my shoulder blades.

I hunch over, but really the weather isn’t that bad. Not com­pared to yesterday, when the wind blew so hard I thought the roof would fly away.

I hear a thud coming from somewhere; maybe it’s a deer—there’s a lot of them around here. Once, Dad came home with a whole deer that Olle had shot, and he hung it upside down in the garage for several days before skinning and butchering it.

A twig snapping and then something else—a stifled groan, like an injured animal. I freeze and peer into the darkness.

Something moves between the trees, creeping through the brush toward me.

The thought scares me, but I know there are no wolves here. Only moose, deer, foxes, and hares. The most dangerous animals in Ormberg are human beings; that’s what Dad always says.

I turn around to run back to the house, but one high heel sticks in the ground, and I fall backward. A sharp rock penetrates the palm of my hand and pain pierces my lower back.

A moment later a woman crawls out of the forest.

She’s old. Her hair hangs in wet strands around her face, and her thin blouse and jeans are soaked through and torn. She has no jacket or shoes and her arms are streaked with blood and dirt.

I turn around to run back to the house, but one high heel sticks in the ground, and I fall backward. A sharp rock penetrates the palm of my hand and pain pierces my lower back.

“Help me,” she says in a voice so weak I can barely understand the words.

I slide backward on the ground in complete terror to escape her. She looks exactly like a witch or an insane murderer from one of the horror movies I watch with Saga.

The rain has gotten heavier and a big puddle spreads out around me. I get up onto my haunches, take off my shoes and hold them in my hand.

“Help me,” she mutters again, trying to get to her feet.

I realize that she’s not a witch, but maybe she could be crazy. And dangerous. Last year, the police arrested a mentally ill guy in Ormberg. He’d escaped from Karsudden Hospital in Katrine­holm and hid for almost a month in somebody’s empty summer cottage.

“Who are you?” I ask, still backing up, my feet sinking into the wet moss.

The woman stops. She looks surprised, as if she doesn’t know how to answer that question. Then she looks at her arms, pushes away a branch, and I see she’s holding something in her hand, a book or maybe a notebook.

“My name is Hanne,” she says after a few seconds.

Her voice sounds steadier, and when she meets my eyes, she tries to press out a smile.

The rain whips against my cheek as I meet her eyes.

She looks different now, less like a witch and more like some­body’s aunt. A harmless old woman who’s ripped her clothes and fallen down in the woods. Maybe she got lost and can’t find her way home.

She looks down at her ripped-up clothes and then looks up and meets my gaze. I can see the despair and horror in her eyes.

“I don’t remember,” she murmurs.

At that very moment, I hear a car approaching in the distance. The old woman also seems to hear it, because she takes a few steps toward the big road and waves her arms. I follow her up onto the edge of the highway and stare into the darkness toward the oncoming vehicle. In its headlights, I can make out Hanne’s bare feet, which are covered with blood, as if she’d scratched them on sharp twigs and stones. And I see something else, too: I see the sequins of my dress glit­ter and sparkle like stars in a clear night sky.

Who knows who might be sitting in that car—could be a neighbor or a friend’s big brother or the crazy old man on the other side of the church—but the likelihood that it’s someone I know is pretty high.

There’s only one thing worse than witches and mental patients and insane murderers—being discovered. If people in Ormberg found out you might as well just shoot me now.

I back up into the woods and squat down behind a few bushes. The driver must have seen me, but hopefully didn’t recognize me. It’s dark, the rain is pouring now, and I am in a costume of sorts.

The car stops, and the window glides down with a hum. Music flows out into the night. I hear the old woman talk to the driver, but I don’t recognize the woman inside or the car. After a minute, the old woman opens the back door and jumps in. And the car disappears into the night.

I stand up and walk down the path, which runs like a dark, shining snake through the woods. The only sound is the rain.

The old woman whose name was Hanne is gone, but she left something on the ground—a brown book.

Who Put Bella In the Wych Elm? 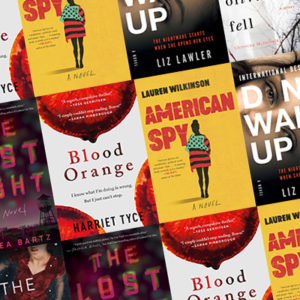 February's Best Debut Thrillers and Crime Novels Breaking into the crime game isn’t easy, but every month, a few brave and talented souls make a go of the mystery racket....
© LitHub
Back to top