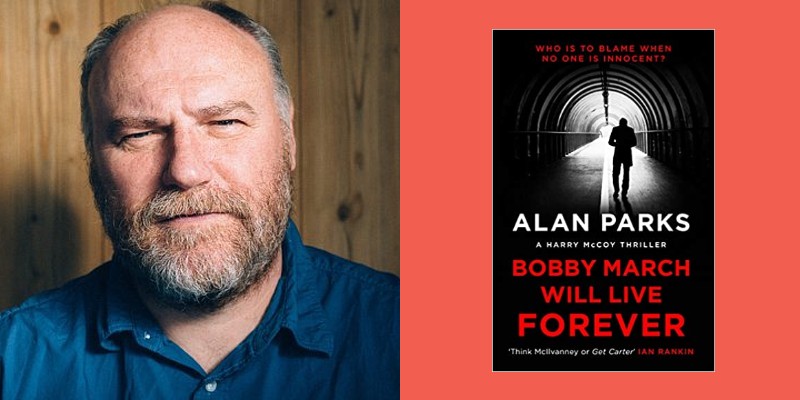 The author of the Harry McCoy novels talks about conjuring up a city and an era.

Alan Parks didn’t set out to be a crime writer. But his beyond gritty depictions of 1970s Glasgow, seen through the eyes of rather bent copper, Harry McCoy, are at once searing and humane. The former music executive—a stint as creative director with London Records is only part of his previous background in the business, after many years in the capitol—returned home to Glasgow, (he actually grew up nearby, in Paisley) where he began a new career at 54.

In the just released Bobby March Will Live Forever, Bobby, a by now past his shelf date rock star, has been found overdosed in a nondescript Glasgow hotel room…with a needle still stuck in his arm. Harry is called by the hotel to come and deal with it. And Harry himself is not exactly in fine shape, either. As he leaves the hotel, “The lift pinged and he got in, pressed G, and looked at himself in the mirror on the back wall. He needed a haircut. Needed a holiday. Needed to be anywhere but in a boiling hot lift, the stink of Bobby March’s last curry on him, suit jacket over his warm, dark rings under the arms of his shirt, a sheen of sweat on his face. Things had to change. And soon.”

Of course, this is noir. So things do change, but not for the better. Harry also is tasked by his boss to find his wayward niece. Oh, and a missing thirteen year old girl, likely dead, but no one can find her, alive or not. A full plate for an erratic cop.

Parks’ original intent: “I once had grand imaginings that I was going to write a book about the social history of Glasgow which went obviously horribly wrong and ended up as a detective novel.”  But aren’t many crime novels actually works of social realism? Getting that subtext, that visceral descriptive prose about dead-end, impoverished, battered lives, all can add up to a convincing portrayal of a Place, and its inhabitants. Although he’s now published four titles in a planned 12 book series, he says, via email in a recent interview, “I wish I had stuck to it! In a novel you don’t have to be entirely accurate, your can shift things around to suit you so I would be wary of saying the novels are social realism. They have a basis in reality but in fiction you don’t have to be as rigorous as you do in proper social history.”

Set in the 1970s, a time Glasgow was drenched in cheap highs, (“Glasgow has always been awash with drugs, the particular ones just change every so often” noted Parks) protagonist Harry McCoy is a cop with more than a few unsavory aspects to his life. He seldom turns down a line of speed, a snort of cocaine, a bowl of hash, or a glass of whiskey. His close friend Stevie Cooper is a hardened local criminal who was a protector of Harry in their troubled youth. Does Cooper, who figures prominently in the books, represent Harry’s dark side, negative impulses, perhaps a doppelganger of sorts, based on any particular person(s)? “He’s sort of based on the one really bad man I have ever met. He was absolutely charming but you knew what he had done and what he was capable of. An interesting dynamic…” One imagines malevolence; Parks will say no more.

Does he think that 1970s Glaswegian police were dopers on a par with Harry? “No,” Parks replies, “I just wanted him to be a thirty year old man who grew up in the sixties before he was a policeman. He had the same experiences as his contemporaries, drugs, drinking, going out.”

And what are Parks’ own memories about Glasgow in the 70s? After all, he was but a lad in 1973. “My memories of that time are very strong. It’s before you become a teenager and completely self-obsessed so you are a sponge taking everything in. Also you are kind invisible at that age (I was ten in 1973) so adults talk away, perhaps more than they should. Family memories are a big part of it. You are too young to go anywhere by yourself. Where the books take place is really a map of my childhood. My Dad drank in The Viking Bar which features in February’s Son. My mum was confirmed in St Agnes Chapel. My great aunty was in Woodielee Hospital. I used to drink in The Rogano….”

One of the most enjoyable—and at times a bit confusing—aspects of the writing is Parks’ extensive use of the local vernacular, the slang of the era that permeates so many conversations. In just a few pages, we’re treated to an array of often hilarious words, including “Chookie,” “Hard cheese, son,” “snottering,” “breeks,” “cheeky bugger,” “the gees-gees”, “ned”. How does language shape your stories? As with the evocation of place, so does the way people talk to—at—each other. “How people talk in the books is the thing that concerns me the most. I hate when dialogue sounds like written speech, it drives me crazy. If I’ve captured the way Glaswegian’s talked at the time I’ll be a happy man!”

And then there are the clothes of the era. Harry has gone to meet with Mary, a reporter he needs a favor from. “Mary, as always, looked the part. Not that McCoy was quite sure what that part might be. A pair of red velvet hot pants were attached to braces that snaked over a white satin blouse peppered with pictures of Donald Duck. Suede platform boots completed the look.”

Parks also captures the essence of hardboiled dialect, as in Harry’s flash of anger at the haughty father, a low-level politician, of the wayward teenaged niece. Feeling treated like “a bloody errand boy” instead of a professional, Harry lashes out: “ …My job is being a polis, and I’m very fucking good at it. And instead of doing it, I’m working off the books to help you and your brother out. All my time spent just so there are no wee surprises in the paper to scupper your chances of being an MP….So if you’d like to get back to issuing dog licenses, or whatever the fuck it is you think you’re good at, and leave me the fuck alone to get on with it, then maybe your daughter will be home sooner than you think.” Take that you arrogant bastard!

In a previous interview, Parks was quoted as saying he writes “Whydunits” as opposed to “Whodunits.” He clarifies now: “I shouldn’t really say this but I don’t really like Whodunits. I find plots like that really hard to follow, then at the end when they say ‘George Thomson was the murderer’ you think ‘Which one was he again?’  I just don’t have much interest or indeed any ability write them. I like a bit of a twist at the end, it kinds of leaves the reader on a high, still thinking about the book after they have finished. Hopefully!”

And finally, writing book four during the pandemic? “As it has been for everyone it’s been a bit of a struggle. On the upside I can still work which obviously a lot of people can’t. The big reference library in town has been shut so haven’t been able to check things as easily. The April Dead was written entirely in the lockdown so no doubt it’s full of historical inaccuracies!”

If some of Harry’s sleuthing feels just a little too predicated on the occasional coincidence, or conveniently being in the right place at the right time, we aren’t particularly concerned. Parks more than succeeds with one of his own affections for crime novels. “I loved crime books that had a real sense of the city in which they were set.” Glasgow, circa 1970s, can hardly seem more vivid and alive. 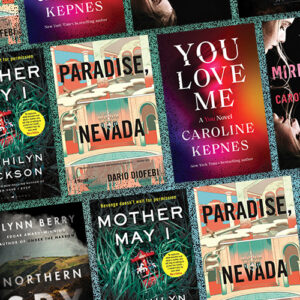 Hello, readers, and hello, April. We are starting to see glimmers of the big psychological thrillers of the summer, from...
© LitHub
Back to top