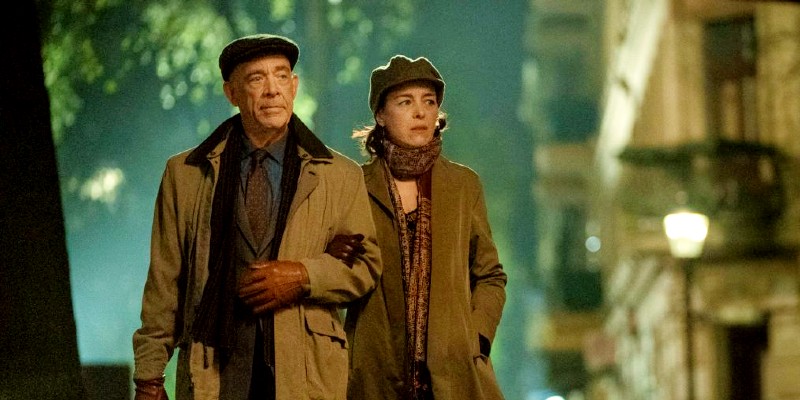 That cross-genre sci-fi spy thriller is just as confusing as you've heard and probably the best espionage series in years.

The chilly Berlin locations—not filmed with a blue filter like the London of “Sherlock” but still sufficient to make you want to put on a sweater—restrained performances and the coldly-calculated plot hold us at arms length while they draw us in.

The credits of “Counterpart” set the tone for the series. They are by turn intriguing and mundane: Shots of impersonal office settings juxtaposed with tantalizing looks at an isolated figure walking through cavernous, stylized underground landscapes.

The latter are meant to suggest the Crossing, the passage between two universes. But when we see the Crossing, it’s a dank basement with utility lights strung up.

Some spoilers ahead, if you haven’t seen “Counterpart,” which saw two seasons of 20 episodes air on Starz in 2017, 2018 and 2019 and which is now streaming on Amazon Prime Video. The show’s mysteries are tantalizing and revelations are doled out with great restraint.

Another day, another world

Alternative universes are nothing new, of course. I lost track of how many universes DC comics created beginning with the rebirth of “The Flash” comic book in 1959. The multiverse and worlds that mirror our own have been front and center not only in comics but in TV shows like “Fringe,” “The Man in the High Castle” (loosely based on Philip K. Dick’s novel) “Motherland: Fort Salem” and even in “Lost.” Not to mention the “Star Trek” mirror universe and the evil goatee sported by Spock (and spoofed in the “Darkest Timeline” episodes of “Community”).

There are no evil goatees in “Counterpart.” Maybe you’ll play the same game as I did by trying to figure out in which of the show’s worlds the scene at hand was set by how star J.K. Simmons was dressed: in black or earth tones?

Simmons got a lot of well-deserved attention for playing two roles in “Counterpart.” He’s the heart of the show. Or maybe the dual hearts of the show.

Simmons plays Howard Silk, a low-level paper-pusher in the Office of Interchange, a Berlin organization related to the United Nations. His daily job is to go to a small booth among many small booths secreted away from the offices in the building and exchange cryptic phrases with the person on the other side of the table.

In this dead-end job for 30 years, Howard yearns to do something else. He seeks a promotion from his job in the Interface division to Strategy, but his effort is quickly dismissed by the head of the division, Peter Quayle (Harry Lloyd).

Simmons also plays Howard Silk, who arrives and throws our Howard’s life out of balance. This second Howard is also an employee of the Office of Interchange but is dramatically different. He’s not a small-time bureaucrat. This Howard—this “other,” this counterpart—is jaded and tough and deadly.

“Our” Howard, the bureaucrat, lives a life recently marred by tragedy. His wife, Emily (Olivia Williams), is hospitalized in a coma after being struck by a car. Emily also worked for the Office of Interchange, but in the Housekeeping division. Needless to say, this Housekeeping does not involve cleaning. And at the top of the Office of Interchange are the mysterious members of Management. The revelation of just who they are comes in the second season and is worth waiting for.

The “stranger” Howard, known as the “Prime Howard” as opposed to our “Alpha Howard,” explains that he is from an alternate reality, a world very much like our own. But in the 1980s, in an event not explained until the show’s second season, the world split, and the resulting “Alpha” and “Prime” worlds and their events diverged.

Confused? Just go with it

It sounds more confusing than it is. Well, maybe that’s not entirely true. I confess I occasionally struggled to figure out which world we were seeing, so I tried to pick up visual clues quickly. How is the Howard in this scene dressed? How much swagger does Simmons display here? Is Williams’ hair loose or pulled back?

Very quickly, such distractions are forced into the background by the storyline. It seems that a decade after the Crossing between the two worlds was opened, a flu virus ravaged one of the worlds, killing millions of people. (The plot point made for some interesting pandemic viewing, I’ll tell you.)

As the Howards and Olivias move through their worlds and the worlds of their counterparts—for Olivia is still an active, badass agent in her world—we learn that something is coming. It takes two seasons to arrive, but the payoff makes the wait worthwhile.

The Howards and the Olivias don’t hog all the intrigue here, of course. Our Alpha world’s Peter Quayle is married to Clare (Nazanin Boniadi) and it turns out that Clare is not what she seems.

The series is full of complex characters brought to life by great performances. Sara Serraiocco plays Baldwin, an assassin who crosses from one world to another and who plays a pivotal role in the climax. Also great are Nicholas Pinnock (currently starring in the ABC series “For Life”) as Ian Shaw, a hard-nosed Housekeeping operative, Betty Gabriel as Naya Temple, an FBI agent who comes to the Office of Interchange with a mission, and James Cromwell—yes, “Babe’s” dad—as Yanek, whose presence in the second season explains a lot. I mean, he literally explains a lot.

‘We kill people. Then we eat breakfast’

“Counterpart” gives us just glimpses, at times, of the differences between the two worlds. The technology is different, for example. In one world, green computer screens are the order of the day and cell phones are rare.

But other key elements of the series are fleshed out fully. There’s a black site prison that the Office of Interchange maintains. Even more chillingly exists a school to train, from childhood, sleeper agents to infiltrate the other side.

“Counterpart” was created by Justin Marks, whose past credits—primarily the 2016 Disney remake of “The Jungle Book”—don’t really suggest his aptitude for science-fiction espionage. And while we’ve certainly acknowledged that alternate worlds stories have been common, it was definitely an innovation to see the genre paired with a John le Carré style story of gray, unassuming intelligence operatives.

Counterpart stands out among the many treatments of alternate worlds/alternate histories that we’ve seen in fiction for a century. Cool but hot-blooded when it needs to be, it’s a level-headed mix of science fiction, mystery, espionage and alternative history. In just two seasons, it created a world— really two worlds—that its fans will never forget.

“Counterpart” is not a show with a lot of snappy one-liners, although as the “Other Howard,” Simmons certainly comes close. Late in the second season, he sums up his character in a quick aside to Baldwin.

“We are who we are,” Howard says. “We kill people. Then we eat breakfast.” 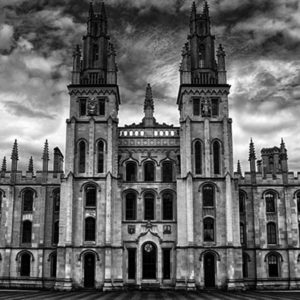 My hometown, Oxford, is a city of bookish ghosts. Its honeyed streets—now spookily empty—hold shimmery echoes of its literary...
© LitHub
Back to top