An Ode to Laura Lee

In researching the world of sex for pay, I met a fierce activist and escort who would change my perception of sex work forever.

In 2008, I was working as a journalist. In a rather desperate response to their plummeting sales, the magazine I wrote for decided to have a Sex Issue, and I was asked to interview “women who do edgy, sexy jobs” for a feature. My extensive research (okay, Googling) led me to the blog of an escort living in the city where I worked. I’d thought, in my naive, presumptuous way, that I understood what prostitution was. I’d watched the TV dramas, I’d seen the stock photography shots—fishnet tights and knee-high boots in an alleyway—and I’d read the crime novels where the sex worker character washes up dead to kick-start the plot.

This woman’s writing completely undercut all of that. She was articulate, angry, and brilliant in her rage. I’ve since come to the rather horrendous realization that I hadn’t actually thought of sex workers as real people, with their own thoughts, ideas, and lives, before. Plot devices, perhaps. Things to be pitied.

Fortunately, she didn’t reply to the clunky, patronizing email I sent (which I’m still embarrassed by today, over a decade on). However, I found I couldn’t stop thinking about her. About her job, her opinions, her voice. I realized I wanted to write something bigger than a titillating headline and throwaway article. (My editor, when I came back with the idea to interview an escort, had blanched, anyway. Not that sexy. Not that edgy.)

I followed the links from the escort’s website. There were links to review forums, where the johns rated the women, the women had right of reply, and my head swum at some of the language used. There were links to organizations where sex working women banded together—education projects, unions, buddy systems—and there were links to other blogs. And this way, clicking and clicking, I discovered a woman who called herself Laura Lee. Escort, sex workers’ rights campaigner, single mother, law student, and ferocious, hilarious political powerhouse.

Laura was the first sex worker to agree to meet with me, much later, once I’d turned my fascination into research, committed to writing what would become my debut novel, Fishnet. I booked a table in a fancy restaurant because I wanted to compensate her adequately for her time—it was a mistake, as it made us both nervous. Laura more so than me; I didn’t appreciate at the time what a risk she was taking in she, or any sex worker, was taking in agreeing to meet a journalist and put a face to her words. Laura had only two years earlier been ‘outed’ as a sex worker and essentially driven out of the small town she was living in at the time. Anonymity is very important for sex workers; many of them have children and almost all of them have friends or relatives they don’t want knowing about their occupation. Think about everything you think you know about sex work—all the horror stories, all the apocryphal tales; every sensationalized portrait in movies and TV. It all contributes to a very powerful stigma, which perpetuates itself as very few sex workers feel they can come out and challenge it by making their own voices known.

Sitting across the restaurant table from me, that first day, Laura essentially dared me to pity her. She had taken the leap to trust me with her identity because she wanted to get more realistic portrayals of sex work out into public consciousness. “People are constantly shocked that, you know, we shop in supermarkets. Just like you do,” she told me later. “We have children. We fight with our teenagers. We have cats, and hamsters. Our jobs don’t define who we are. We don’t have horns on our heads or ‘666’ tattooed on our bums: we’re just normal women getting on with our lives.”

Laura entered sex work as a college student; had been doing it for almost twenty years by the time I met her. After Fishnet came out in the UK, I interviewed her for (another) article and I asked her to tell her story. I remember that she took a deep breath in and recited, in a slightly flat voice, an answer she’d clearly been asked a lot.

“Okay. I was going through university the first time round and I was nineteen. A lot of my friends were doing four or five nights a week in pubs or clubs, behind bars; I’m inherently lazy, so I took the unorthodox decision to become the Saturday girl at the local massage parlor. Not everyone’s choice obviously, but it was one that worked for me, and I don’t have any regrets. I wanted to leave university debt-free, and I did.”

I sat there, feeling like I’d stepped over a line in our burgeoning friendship, asking her to turn out her past again for the sake of an article; to satisfy that same curiosity that non-sex working women always seem to have about the industry. It was something I noticed increasingly as I toured to promote Fishnet: audiences have an almost prurient need to know, first of all, how; an itch I’ve just scratched for you, here. Perhaps, again, it taps into that lack of actual knowledge that the general public has about sex workers’ lives; what’s frightening is that that lack of knowledge is all too often used when constructing legislation about those lives.

With Laura’s seal of approval, I was able to break through further while researching the novel; she introduced me to other women she thought I might want to talk to and kept me informed about developments in the ongoing campaign she and her peers had found themselves enmeshed in, for sex workers’ rights. She allowed me to use her name as a sort of passport for approaching other sex workers online, enabling me to deepen my understanding of this world. She was forthright, was Laura. She took no shit. Formidable, beautiful and armed with the sort of sense of humor that’s been forged through fire. She was also one of the bravest people I’ve ever met.

If it got Laura down, she never once let them see. She was blazing with fury and conviction.

That interview was the last time I saw Laura face to face. We had cake and tea at my house, which wasn’t so very far from hers, and she hugged me hard before she got in her car. We made noises about meeting up more often, but I was pregnant and she was already heavily involved in the case that would define the rest of her life: taking the Morrow law (which criminalized the purchase of sex, and in doing so made life much more dangerous for sex workers at all levels) recently implemented in Northern Ireland to the European Court of Human Rights. To do this, she needed to out herself, put her head above the parapet and become, essentially, a public face of sex work. At one point she was even represented by a celebrity publicist, one well-known enough in the UK that he frequently found himself becoming the story.

Making herself public like this—going on television and radio, putting her face to her social media output, a column with the Huffington Post—invited opprobrium, leers from neighbors and the other parents at the school gates, sneering faceless men on Twitter picking at her looks after every TV appearance.

“It wasn’t an easy decision, but at least it happened on my terms,” she said. “And I like being public, in terms of my activism, because I debunk the myths so beautifully, you know. I love the reactions—wait, she’s…articulate? She’s working on her second degree? She doesn’t look particularly damaged; she didn’t have a traumatic childhood…?

“People grow up believing that prostitutes—and I hate the p-word—are ‘dirty’ women. Getting our voices out there is very important for combatting that stigma—people need to hear someone saying ‘I’m not trafficked, I’m not pimped, nobody tells me when I can and can’t work, and the vast majority of sex workers I know are the very same.'”

If it got Laura down, she never once let them see. She was blazing with fury and conviction by this point; she underwent several traumatic experiences during this time and they all seemed to fuel her further. She fought her case online and in courts all over the UK and Ireland, and was ferocious as she did.

The woman the world knew as Laura Lee died suddenly in February 2018. She left behind a teenage daughter, a menagerie of pets, and an international network of people who are determined she won’t be forgotten. Her campaign to overturn the Morrow law has been abandoned for now, as her legal team was unable to find another plaintive for the case, but her bravery, beautifully articulated arguments, and fierceness have inspired thousands of people and her legacy is still growing. The new edition of the book that couldn’t have happened without her is dedicated to her memory.

Kirstin Innes is an award-winning writer, journalist and arts worker living in the west of Scotland. She founded the Glasgow literary salon Words Per Minute, and has had short stories published in a number of anthologies and commissioned by BBC Radio 4. Kirstin has won the Allen Wright Award for Excellence in Arts Journalism twice. Fishnet is her debut novel. 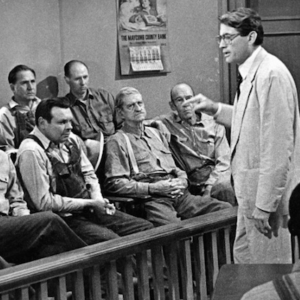 The first book to ever pull me into its suspenseful grip was To Kill A Mockingbird. I remember getting lost in the story...
© LitHub
Back to top