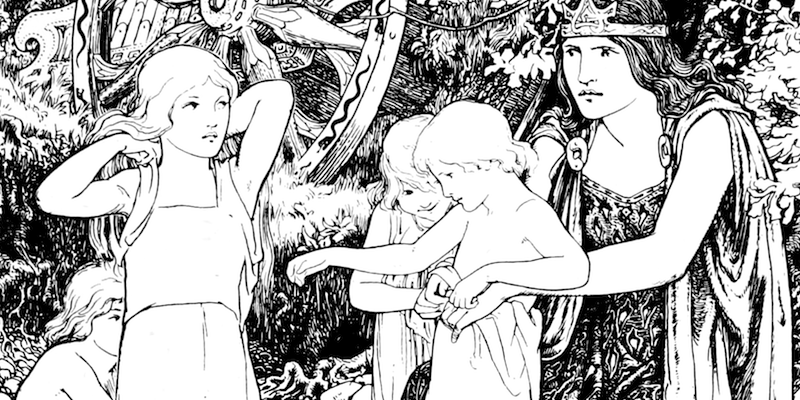 Away With the Fairies

How an old family legend and the story of a haunted cottage taught me a healthy respect for the supernatural.

Once upon a time there was a colleen (young girl) by the name of Mary Ann O’Rawe. She was born in Ballymena, Northern Ireland. For those of you who are into hunky Irish actors, that’s County Antrim, where Liam Neeson hails from.

I never got to meet Mary Ann O’Rawe, but she was my maternal great-grandmother. However, one of her childhood stories has lived with me—one that my sister and I asked my grandmother to tell over and over again.

My grandmother did not disappoint. One day, when Mary Ann was late getting home from school, she decided to take a shortcut through the local cemetery. There was a heavy fog in the air and she soon got turned around, unable to find her way out. Suddenly, a black dog appeared by her side. She followed it, and not only did this dog lead her out of the cemetery, it took her all the way home. When she turned around to thank it, the dog had disappeared. I thought it was a ghost story, and a darn good one at that. It made me feel close to a great-grandmother I’d never met, and I’d imagine myself in that cemetery, following that good boy home.

Last year, when I was about to begin outlining Murder in an Irish Cottage, on a whim I decided to google the title. I had never done that before with my novels (however, if you ever run into me, feel free to ask me how I came to adopt my Labradoodle).

I wasn’t expecting much from the search, but boy, was I wrong. This headline hit me right away:

THIS COTTAGE MAY REALLY BE HAUNTED BY VIOLENT FAIRIES

If your reaction is: “Say what?”

I devoured the article. In Lixnaw, Ireland (County Kerry), five inhabitants of a public-owned cottage had died mysteriously over the past two decades. A fire, a hanging, a stabbing, a car accident, and a murder where the suspect was the woman’s autistic son. By the fifth death half the town was in an uproar to have the cottage torn down. They closed it to renters while they battled out its future. (As of the date of the article, the cottage was still standing.)

I had my story, with a lot of tweaks of course, and down the fairy path of research I went. (Follow the yellow brick road?)

I was soon overwhelmed with Tuatha Dé Dennan (Irish Mythology) and fairy stories, from types of fairies, fairy rings, fairy trees, fairy forts, and even fairy paths. The most common of each: A ring of wild mushrooms, Hawthorn trees, old stone forts, and anything in the direct path of any of the two. There were Changelings, Leprechauns, The Good Folk, and The Little Folk. I read stories of people’s experiences with fairies, good and bad. I listened to seanchaí (Irish storytellers), transfixed by the tales. Fairies are not all evil. Some can be playful. They’re cunning. If you do favors for them they can be downright cheerful. (Just don’t mess with them.)

Article continues after advertisement
It was somewhat of a magical moment for me. A new depth to an old ghost story.

Do Irish people really believe? I polled my Irish friends. Their first reaction, a “no,” they’d laugh, “Are you joking me?”

But when I asked: “Would you ever disturb a fairy tree, or fairy ring, or fairy fort?”

That was unanimous: “Not on your life. Better leave well enough alone.”

It was during my research that I came across a revelation that gave me goosebumps. Fairies can change shapes. One might be standing next to you right now and you wouldn’t even know it. (Did you look? I think you looked.)

One common shape they take? A black dog.

I became a cliché, and my jaw dropped. My great-grandmother was suddenly before me, lost in a foggy cemetery. And there he was. The black dog that led her home and disappeared. Not a ghost story. A fairy story.

Did my grandmother, when reiterating this story to me and my sister, know that a black dog was a common form that fairies often took? I honestly don’t know. She was one of the smartest women I knew, so I bet she did. Maybe she didn’t want my image of fairies to be anything other than Tinker Bell. It was somewhat of a magical moment for me. A new depth to an old ghost story. Why, after not having done it with my previous 14 novels (I have written novels and novellas under Mary Carter as well), did I suddenly decide to google a title? You might say it’s coincidence, and it could be. Just like the second coincidence related to this book.

Shortly after I received my author copies in the mail, I was walking my dog. I looked down, and there, at the base of a tree, was the replica of a tiny stone cottage. I was floored. I had never seen anything like it before. Yes, I took it. Literally, I took it home, as you can see in the picture, and figuratively, I took it as a sign. Be it my great-grandmother, or grandmother, or the fairies themselves, this book had their blessings. And this I do believe. 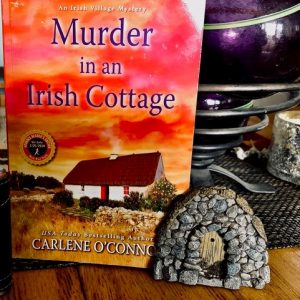 USA Today bestselling author Carlene O’Connor comes from a long line of Irish storytellers. Her great-grandmother emigrated from Ireland filled with tales and the stories have been flowing ever since. Carlene currently divides her time between New York and the Emerald Isle. She has just released the fifth installment of her Irish Village Mysteries series, Murder in an Irish Cottage. 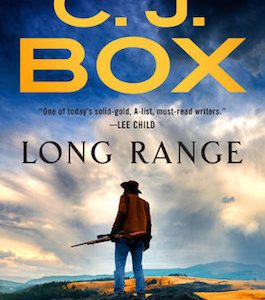 At the same time, inside a falcon mews on the sagebrush prairie outside of Saddlestring, Nate Romanowski firmly grasped a pigeon...
© LitHub
Back to top