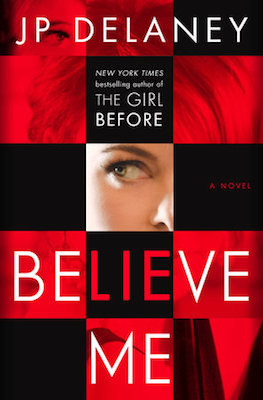 The following is an exclusive excerpt from The Girl Before, the second psychological thriller from author J. P. Delaney, in which an actress hired by a law firm to test the loyalties of married men encounters a new and mysterious client just before the client’s untimely demise.

The policewoman takes me to One Police Plaza, where I wait in a small, stale room on the eighth floor. I’ve asked her what it’s about but she won’t tell me, just says she’s been told to collect me and everything will become clear soon. Or ‘momentarily,’ as she puts it.

It must be that producer I threatened with Jess’s gun, I’m thinking nervously. He must have filed a complaint. Whatever happens now can’t be good. I know gun laws are a lot less strict over here but I don’t think you can just wave them at people.

Eventually a burly man in plain clothes comes in and introduces himself as Detective Frank Durban. I jump up eagerly and shake his hand, trying to make a good impression. Detective Durban looks a little surprised, but indicates the younger, shaven-headed man holding a pile of papers who comes into the room behind him. “And this is Detective Davies.”

“Do I need a lawyer?” I say anxiously.

“That depends. What have you done?” Durban says. I laugh, because he said it kindly, like a joke, but I notice he gives me time to answer before he adds, “You haven’t been arrested or charged, Claire. We just want to ask you some questions. About Stella Fogler.”

“Who?” Then I remember. Not the producer after all.

“I understand you do some occasional work for a law firm called Kerr Adler,” Durban adds as we sit down. “That correct?”

“Tell me about that.”

For a moment I consider lying—the job may be non-union, but I’m pretty sure it’s breaking my visa conditions—but since they clearly know quite a lot already, I do as Detective Durban says and tell them everything: my class, Marcie, the decoy work, the hidden camera in my bag. After a while Davies pushes his papers to one side and starts taking notes.

I do as Detective Durban says and tell them everything: my class, Marcie, the decoy work, the hidden camera in my bag.

“And was there anything unusual about the assignment for Mrs Fogler?” Durban asks. “Anything out of the ordinary?”

“Well, I was asked to meet her beforehand. That doesn’t always happen.”

I shrug. “I guess she wanted to take a look at me. See if she thought I was suitable.”

“And how did she seem on that occasion?”

I think back, remembering the way Stella Fogler had paced up and down by the windows. “Well… Nervous.”

“Can you be more specific?”

I say slowly, “It was like she was frightened of something.”

The two men don’t look at each other but I feel them go rigid with attention. “Is Mrs. Fogler all right?” I add.

“Just tell us what happened, Claire,” Detective Durban says. “In what way, frightened?”

I tell them about Stella, then how I approached her husband in the bar. When I get to the point where Patrick gave me the book of poetry and walked away, Detective Durban stops me. “Think he’d guessed what was going on?”

“Okay. And Mrs Fogler? How did she react when you told her how it went? Was she pleased? Reassured?”

“Not exactly.” I repeat what she’d said about getting something on her husband. Somehow it sounds more ominous now. The way these two cops are grilling me so intently feels like it can’t be good.

“Are Patrick and Stella okay? Did something happen?” I ask, and again they don’t answer my question.

“When she paid you, did you see any other money? In her bag, maybe?” Detective Durban asks.

I shake my head. “But there must have been at least a thousand in the two rolls she got out. She paid me in hundreds.”

“So you took four bills.” Durban puts a lot of emphasis on the word four.

“What happened to the rest?”

“We didn’t find any money on her person,” he says flatly. “And she’d made a large cash withdrawal that morning. Substantially more than a thousand dollars.”

“We’re treating it as homicide. That’s all I can tell you at present.” He continues looking at me steadily. His expression, which had seemed friendly, even avuncular, has hardened. “I can say that she died in her suite, some time before dawn. The same night you were with her.”

“I can say that she died in her suite, some time before dawn. The same night you were with her.”

He takes me over it again, and then a third time. Davies keeps scribbling notes.

“What happened to the video?” Durban says at last. “The one from the hidden camera. Who has it now?”

I think back. “I gave that to Stella. That’s standard. She’d paid for it, after all.”

“And the book of poems?”

“Still in my bag. I don’t usually read poetry but these are really interesting, in a weird –”

“We’ll need it,” he interrupts.

He finds an evidence bag, turns it inside out and uses it as a glove to take the book from me. “So you leave the hotel,” he says. “Then what?”

“I went out with some friends.”

I nod. “The Harley Bar. There were plenty of people who can confirm I was there by nine thirty.”

“And you got home when?”

“I—I’m pretty sure I’ve got his phone number somewhere.” I rummage in my bag and find a scrap of paper. “Yes. This is it.”

Detective Durban scrutinises it as he takes it. “Looks like an ‘i’ to me. Tim, not Tom. We’ll contact him.”

“What did you do with the money, Claire?” Detective Davies says suddenly. It’s the first time he’s spoken.

“The four hundred dollars? I gave it to my roommate. I owe her a lot of back rent, so—”

“Not the four hundred,” he interrupts. “The twenty thousand dollars you stole from Stella Fogler’s hotel room.”

I stare at him, my head swimming. “What? No—you can’t think—”

“There never was any money—not that amount. At least, I never saw it. Am I a suspect?”

“A suspect?” Davies snorts. “You’ve already confessed to recording without consent, working as an unlicensed investigator, soliciting and conspiracy to blackmail. We just need to wrap up theft and murder and we’re done here.”

“According to Henry North, you had an argument with Mrs Fogler that night.”

“I told you—she was the one acting weird—”

“So you went away, brooded on her rudeness… And then you went back to her room,” Davies says. “Where she just happened to have a large quantity of cash. Henry North told us about your financial problems. It must have been galling, to see a woman like that with so much wealth.”

I shake my head, mystified. “I told you, I only went back to return the book. And look, Henry told me everything I did for that firm was legal. So long as you record them in a public place, he said. And you’re not soliciting if they make the first move.” A thought strikes me. “Have you questioned him?”

“Of course. And we’ll check his account very thoroughly. Just as we’ll check yours. With this Tim.”

“Did you kill Stella Fogler, Claire?” Detective Durban asks, as matter-of-factly as if he’s asking whether I take sugar in my coffee.

There’s a tense silence. “Detective, shall we confer outside?” Durban says.

They step out. I hear the murmur of voices through the door. Then Durban comes back alone.

“I’ll need the details of at least three people who can confirm you were at the bar by nine thirty,” he says. “After that, you can go.”

I stare at him. I’m lightheaded with relief. “So you don’t think I did it?”

“We’ll double-check everything you’ve told us. If you’ve been telling the truth, we should be able to eliminate you from the investigation pretty fast. But don’t leave the city without checking in with us first. And my strong advice is not to undertake any more work for that law firm. This is a murder investigation, Ms Wright, not an immigration check, but if we find out you’ve broken the terms of your visa again, I won’t hesitate to pass that information to the relevant authorities.”

And with that he starts scooping up the paperwork, sorting it into piles. It was all a performance, I realize: the classic good-cop, bad-cop grilling, designed to put the fear of God into me.

And it worked, too. I’m still shaking. If I had done anything wrong, I’d have confessed to these two in a heartbeat. The mixture of confidence, empathy and aggression reduced me to a cowering submissive within moments.

But even now, in the midst of my relief, I find myself thinking, What can I use from that?

From BELIEVE ME. Used with the permission of the publisher, Ballantine Books. Copyright © 2018 by J.P. Delaney.

The Many Faces of Philip Marlowe 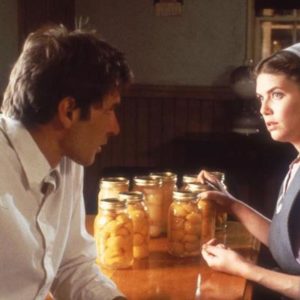