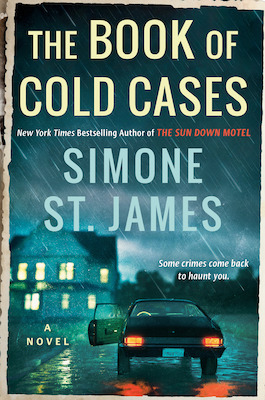 The following is an exclusive excerpt from Book of Cold Cases, by Simone St. James. Shea Collins is a true-crime reporter, drawn to the subject matter because she survived an abduction as a child. When she encounters Beth Greer, the wealthy woman who had been a suspect in the Ladykiler Murders of 1977, forty years before, she asks for an interview, not expecting Beth to say yes. But as she meets Beth week-to-week in her isolated mansion, she begins to realize that something is not right.

I was tired at work the next day, because I’d stayed up later than I should have, working on the Book of Cold Cases. The bus had been ten minutes late, I’d dropped my bus pass, and I’d gotten to work out of sorts. I was on autopilot.

Our office was in downtown Claire Lake, and our patients were mostly rich, or at least well-to-do—Claire Lake on the whole was well-to-do, a town of chic kitchen specialty stores and French bistros laid out along the ocean shore. The spectacle I saw from the safety behind my Plexiglas was never that of people digging their nails in for survival, doing their best to get through every day. Instead it was of- ten the foibles of the rich, the ones who had the money to make their aches and pains go away.

For a few minutes, I thought the woman who walked in might be someone famous. Her face was familiar in a way I couldn’t quite place. She was an actress, maybe, one who had been on TV several decades ago. She was tall and stately, likely over sixty. Her skin was nearly flawless, with creases around the eyes and the mouth to give her character. Her hair was fashionably cut, with long bangs sweeping to her eyebrows and layers falling to her shoulders in light and dark shades of gray. She wore a black turtleneck sweater and sleek black pants under a trench coat. To me, the glamour wafting off her was worthy of Isabella Rossellini or Helen Mirren, though the woman seemed unaware of it. She looked distracted, and after slipping her ID beneath the Plexiglas to Karen, she took a seat, pulled out a pair of stylish reading glasses, and started reading a dog-eared novel.

“What?” Karen said to me as she wheeled her office chair back to the shelf and looked for the woman’s file.

“I know her from somewhere,” I said. There was a brief lull in which the phone wasn’t ringing, and I sipped my coffee and tried to be discreet as I looked at the woman again. She flipped a page in her book, oblivious. I couldn’t read the title from here, but I could see a cover of deep blue with slashes of jarring yellow lettering, which meant a thriller like the ones I read.

“She doesn’t look familiar to me,” Karen said. “Maybe she was a teacher of yours? A neighbor?”

I shook my head, studying the woman’s face, still trying to place it. There was something about her cheekbones, the line of her mouth. She was beautiful, for sure, and had likely been even more so when young. I’d never had a teacher who looked like that. She had to be an actress, yet that didn’t seem right.

“A singer?” I said, trying to jar my memory. “A politician?”

Karen shrugged, uninterested. “I don’t follow music or politics. If it bothers you, Google her.” She glanced down at the file she was holding. “Elizabeth Greer.”

I went still, the breath going out of me. “What?”

“That’s her name, Elizabeth Greer.” Karen squinted at me, frowning. “What? Is she famous? Should I try and get an autograph?”

I put my hands on the desk. My fingers were tingling, my cheeks going numb. “No,” I said. “No, you don’t want her autograph.”

“Whatever,” Karen said. The phone rang, and she turned away to answer it.

Elizabeth Greer, I thought, glancing at the woman again. Beth Greer. She sat reading her book, unaware I was staring.

Of course I knew her face. I’d seen dozens of photos of her, news footage. I’d put photos of her on my own website. I hadn’t recognized her because the photos on my site were from forty years ago, and no one had a photo of what she looked like now.

The woman sitting twenty feet away from me, reading a book, was Beth Greer.

And in 1977, she’d been Claire Lake’s most famous murderer.

In October of 1977, a man named Thomas Armstrong left work at six o’clock at night and got in his car. He left downtown Claire Lake and drove toward his house at the edge of the lake, taking the smaller roads out of town. He never got home. At seven thirty, his car was found, the lights on and the engine still running as Armstrong lay dead on the side of the road.

Armstrong was a family man, with a wife, two children, no criminal ties, and no debts. It appeared that he’d pulled over on his way home, possibly to help someone who needed aid. He was shot twice in the face, one bullet piercing his brain and killing him instantly. Next to him was left a note written in a woman’s hand that said: Am I bitter or am I sweet? Ladies can be either. Publish this or there will be more.

Murders were rare in Claire Lake, so there was no question the case would receive front-page press. But the note put the local police in a quandary. Keep the note quiet and don’t encourage a possible copycat? Or give the killer what she wanted? There didn’t seem to be a right answer. Finally, they handed the note to the press, who immediately dubbed the murderer the Lady Killer.

No one could understand it. Had a woman really shot a strange man point-blank in the face, like the Zodiac Killer or the Son of Sam? Thomas Armstrong had no enemies. No one could think of any- one who would have wanted to murder him; he seemed to be an everyday husband and father on his way home from work. No one could see a reason why he was targeted. But there he was, dead by the side of the road, the lenses of his glasses smashed and a note in a woman’s hand left by his body.

And then things got worse.

Four days after Armstrong’s murder, family man Paul Veerhoever left work to go home. He, too, pulled over to the side of the road on the outskirts of town, where he was shot twice—one bullet hitting his jaw and one his right temple. This time a witness walking his dog heard the shot and came out of the trees to find a woman get in a car and drive away. She had red hair and she was wearing a trench coat.

Next to Veerhoever’s body was a note in the same hand as the first one: Catch me!

The town panicked. No one in Claire Lake had ever seen crimes so violent, so brutal, so random. who is the lady killer? was the headline from the Claire Lake Daily. The next day, in the Claire Lake Free Press: police warn Claire Lake residents to “stay safe after dark.” People—men especially—were warned not to pull over and help anyone on the road. The news wires picked it up, and within days the case had gone statewide, with reporters from Portland and Eu- gene coming to town to cover it.

It was a great story: two innocent, upstanding husbands and fathers, gunned down execution-style in cold blood. A dark predator on the streets of a quiet seaside town, apparently hunting for victims. The victims, in this case, were men, and the cold-blooded killer was quite possibly a woman.

The witness to the second murder identified the woman he saw as Beth Greer.

Excerpted from The Book of Cold Cases by Simone St. James, published by Berkley, an imprint of Penguin Publishing Group, a division of Penguin Random House, LLC. Copyright © 2022

Bad Love, Good Sex: The Best Thirst Traps in Crime Fiction Not everyone is spending Valentine's Day with their significant other, playing into the romantic consumerist fantasy that...
© LitHub
Back to top