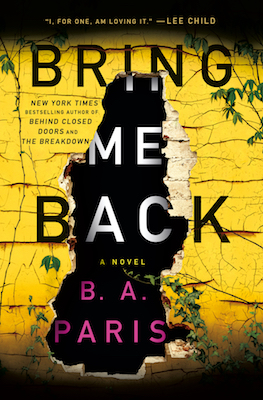 The following is an exclusive excerpt from Bring Me Back, the new psychological thriller from rising queen of suspense B.A. Paris, author of the international bestsellers Behind Closed Doors and The Breakdown. She grew up in England but has spent most of her adult life in France. In the following passage, we learn of a doomed French road trip.

We were on our way back from skiing in Megève. I decided to stop in Paris on the way up as a surprise for Layla, because she had never been there before. We had dinner in a restaurant by the Notre-Dame Cathedral and then went for a walk along the Seine. We could have stayed the night there—now, I wish we had—but we were both eager to get home to our cottage in St. Mary’s, in Devon.

It must have been around midnight by the time we left Paris.

It must have been around midnight by the time we left Paris. About an hour and a half into our journey I wanted to go to the toilet so I pulled off the motorway, into the picnic area at Fonches. It’s not a service station, you can’t get petrol there or anything, but I knew it had toilets because I’d stopped there before, on previous skiing trips to Megève. The place was deserted apart from the car I told you about, the one parked directly outside the toilet block. I think there were a couple of trucks in the truck bay on the other side; there must have been at least two, the one I saw leaving and the other one, the one whose driver we spoke to after.

There was an empty bottle of water rolling around the car and we’d been eating snacks on the way up from Megève so I drove past the toilet block and down to the end of the car park where there was a rubbish bin, so that I could get rid of the wrappers. I—I should have just parked outside the toilet and walked down. If I had, then I would have been nearer. I should have been nearer.

Layla was asleep—she’d fallen asleep as soon as we’d hit the motorway, and I didn’t want to wake her so I sat for a while, just to relax a bit. She woke up when I started gathering up the stuff to throw away. She didn’t want to use the toilet there, she said she’d rather wait until we stopped at a proper service station, so as I got out of the car I told her to lock the doors behind me, because I didn’t like leaving her there in the dark. She really hates the dark, you see.

On my way into the toilets, I passed a man coming out and a minute or so later, I heard a car drive off. He was shorter than me, maybe six foot? I think he had dark hair, he definitely had a beard. I was quick in the toilet, I didn’t like being in there, I felt unnerved, as if someone was watching. Maybe it was because one of the stall doors was closed.

As I made my way back to the car, I heard a truck pull out of the parking bay and I watched it as it headed along the slip road to the motorway. He was driving fast, as if he was in a hurry, but I honestly didn’t think anything of it at the time. In the distance I could see the silhouette of our car; it was the only one left because the other one, the one that had been parked in front of the toilet block, had gone. It was only when I got closer that I realized Layla wasn’t in the car and I thought she must have changed her mind about going to the toilet. I remember looking behind me, expecting to see her hurrying after me—I knew she’d be as creeped out by the whole place as I was—but she wasn’t there, so I got into the car to wait. But the darkness began to get to me so I started up the engine and moved it in front of the toilet block, where there was at least a modicum of light, so that Layla wouldn’t have to walk all the way back in the dark.

It must have only been a couple of minutes before I began to worry. It didn’t feel right that she hadn’t appeared yet so I got out of the car and went into the ladies’ side of the block to look for her. There were three stalls, two were empty but the other one had the door closed so I presumed she was in there. I called to her and when there was no answer I put my hand on the door and pushed against it. It swung open easily and when I saw that Layla wasn’t there I hurried back outside and began calling for her, thinking that maybe, after I left the car, she’d decided to go for a short walk to stretch her legs or get some fresh air. But even as I was thinking it, I knew she would never have wandered off, not at night, not when it was pitch-black because, as I said, she hated the dark.

I knew she would never have wandered off, not at night, not when it was pitch-black because, as I said, she hated the dark.

I ran round to the back of the block, in case she was there, and when I couldn’t find her I got a flashlight from the trunk and widened my search, taking in the whole picnic area, shouting her name. There was still one truck in the bay so I went over and called out, hoping to find someone to help me look for her. But there was no one in the driver’s cabin and when I hammered on the door no one answered, so I assumed the driver was asleep in the back. I tried hammering on that door too but nobody came and when I took out my phone and realized that I didn’t have a signal, I didn’t know what to do. I didn’t want to leave in case Layla had fallen and was lying injured somewhere, but I knew I wasn’t going to be able to find her with only the light from my torch. So I got back into the car and drove as fast as I could to the next petrol station and ran in shouting for someone to help me. It wasn’t easy to get them to understand me because my French isn’t very good but they finally agreed to phone the local police. And then you came and you spoke good English and you took me back to the picnic area to help me look for Layla, because I really needed to find her.

That was the statement I gave to the police, sitting in the police station somewhere off the A1 in France. It was the truth. But not quite the whole truth.

From Bring me Back. Used with the permission of the publisher, St. Martin’s Press. Copyright © 2018 by Bernadette MacDougall. 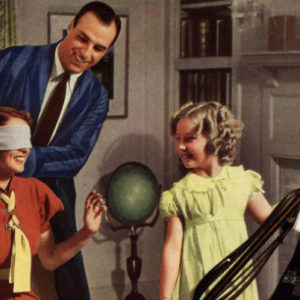 8 of the Worst Fathers in Modern Suspense Father’s Day. It’s that time of year to praise the good dads for all they’ve done. Dads are patient teachers, conditional...
© LitHub
Back to top