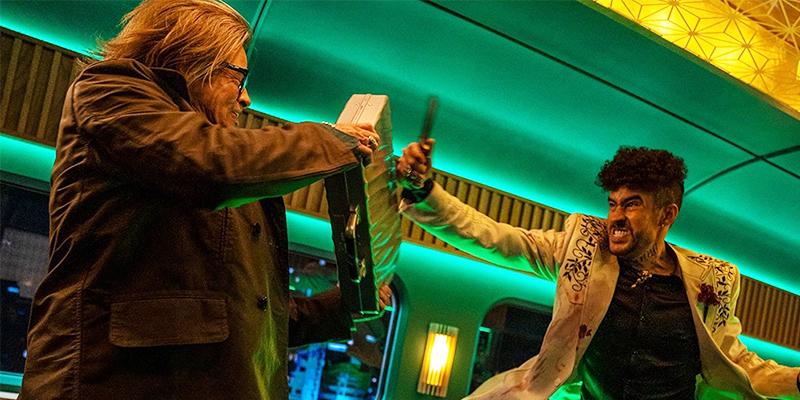 Bullet Train, directed by David Leitch and adapted by Zak Olkewicz from Kōtarō Isaka’s novel of the same name, promises a perfectly-contained, hurtling premise: a handful of assassins with vague ties to one another all find themselves, seemingly randomly, executing conflicting missions on a speed train bound for Kyoto. Even without knowing anything else about it, that should be enough to make you buckle up.

Brad Pitt plays “Ladybug” (a nickname given to him by his witty handler, whom he talks to via earpiece). He is a cheerful but unlucky small-time operative sent to the bullet train to steal a suitcase from the baggage area. Aaron Taylor-Johnson and Brian Tyree Henry are “Tangerine” and “Lemon” (respectively), two Cockney contractors known as “the Twins” who are in charge of guarding the briefcase, as well as delivering the delinquent son of a crime boss (a face-tattooed Logan Lerman) back to his father. Joey King is “the Prince,” a stuck-up teenager with her own plan to grab the case, and Andrew Koji is Kimura, also known as “the Father,” a man lured onto the bullet train to become a patsy in a plot to assassinate the very crime boss coming to claim his rescued son. (Kimura is called “the Father” because he is tricked into boarding the train to avenge an attack on his own son. If you’re starting to see double, don’t worry—you’re supposed to, and this won’t be the last time.)

Of course, there are more players in this game scattered among the train cars, waiting on station platforms, and phoning into the action—and as the high-speed rail shoots along, shuffling passengers in and out, pushing the various agents into each other’s stories more and more, the whole thing turns its parallel stories into an impressively intricate and yet surprisingly streamlined chain of redemptions that, like train tracks, all merge into one, sooner or later. In other words, even those who do start out simply as strangers on a train won’t stay that way for long.

Bullet Train is nothing if not thoughtful, even when it jokes and especially when it doesn’t.

I’ve been riding the high of Bullet Train for a few days now; when enough time passed after my initial viewing and I was able to think of other matters again, I went and saw it a second time and found myself transported once more. It is a gleefully breakneck romp—“pure cinema!,” I exclaimed to far too many friends and family members on the phone afterwards. It’s an enthusiastic contribution to that category of high-octane, ensemble action movies that concentrate on the collision of various interests—it’s a bit like Lock, Stock, and Two Smoking Barrels, a bit like The Hateful Eight, even a bit like The Usual Suspects.

Bullet Train is also clearly, squarely a comedy—and I’ll admit that its trailers, which advertise that kind of Deadpool-esque crassness and glibness famously trod in by director Leitch, made me a bit nervous that Bullet Train’s comic stylings existed simply for irreverence’s sake, for the chaotic fun of combining social thoughtlessness with displays of physical competence and athletic mastery.

But Bullet Train is nothing if not thoughtful, even when it jokes and especially when it doesn’t. It boasts surprising organization not only on a narrative level, but also on a thematic one. The film is laced up with dueling themes of “luck” and “fate,” and perhaps the greatest of all the film’s showdowns is the one between these two concepts in its characters’ minds. (Though, perhaps, like everything else in Bullet Train, these two disparate lanes will wind up leading to the same terminal, too.) The players in Bullet Train are obsessed with making their own choices, taking control of their lives, and acting with free will— all while acting as puppets for the other characters, and in the shapes that their life experiences have cut out for them (and therefore also the machinations of a greater providence). As such, the movie has a lot to say about coincidences, close shaves, and deus ex machinas.

The film is laced up with dueling themes of “luck” and “fate,” and perhaps the greatest of all the film’s showdowns is the one between these two concepts in its characters’ minds.

Bullet Train also has a warm emotional center, fueled mostly by the loving collaboration between the hitmen Tangerine and Lemon. Taylor-Johnson and Tyree Henry have a brotherly chemistry—the kind that would be perfectly suited to a sitcom about nearly-incompatible roommates—and also supply the film with a unique moral order based on one of the greatest ensemble-driven texts of all time, Thomas the Tank Engine (talk about conflicting personalities showing up at the same station!). There are rules upon rules in Bullet Train; even when it seems like the whole thing might easily fly off the rails, it barrels neatly through numerous philosophical platforms, even ones you might never expect.

And it’s hard not to root for the somewhat-hapless Ladybug, even when his interests butt up against Tangerine and Lemon’s. It’s been said by many that Brad Pitt is a character actor cursed by leading man looks that prevented him from having the career he was meant to. Fortunately for us, he’s been playing his fair share of quirky side characters since at least 2008 (looking at you, Chad Feldheimer… and also you, Lt. Aldo Raine).

There’s a lot to observe as you zoom along, but don’t sleep on the visuals. Each train car is its own colorful little capsule of a set—each with its distinct lighting and wallpapers and upholstery. Each car glows as if it was filmed through a designated section of a church window or a unique piece of sea glass; the whole train is a rainbow of connected bottles, with its shadowy characters trapped inside, with nowhere to go but back-and-forth.

Bullet Train packs a lot into its outing, but not at the expense of coherence and capability. Its locomotion is steady, despite the twists and turns. I’ve seen it twice and I expect there are still many more nuances left to catch, many more thrills left to experience. As they say, the point is the journey, not the destination, and the journey of Bullet Train is not only worth a ticket, but also at least a return trip.

The Best Nonfiction Crime Books of 2022 (So Far)

The Creative Life and Death of Bruce Montgomery, aka Edmund Crispin 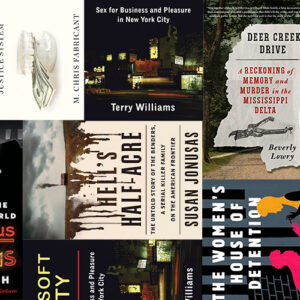 The Best Nonfiction Crime Books of 2022 (So Far)

2022 has been a banner year for true crime and critical nonfiction, and it was difficult to narrow it down to just the top 10 —and...
© LitHub
Back to top