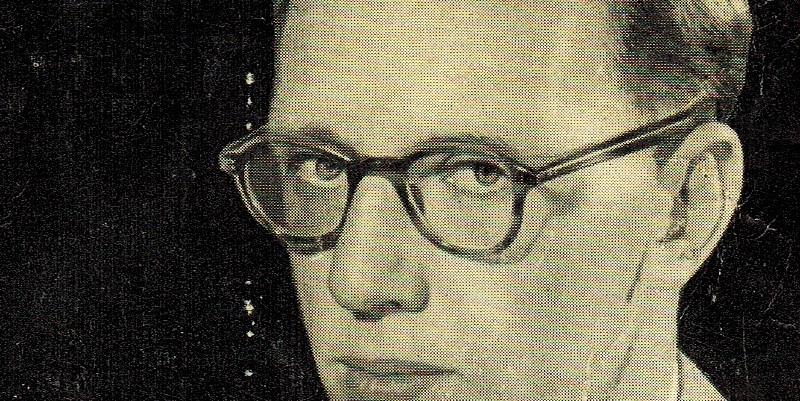 In 1950s Australia, one author—writing books about detectives and cities he'd never visited—gave birth to a phenomenon.

Alan Yates was a mid-century Australian crime writing phenomenon, 300 plus books over a career that spanned the late 1940s to his last novel, The Dream Merchant in 1977. Published in 35 countries and 27 languages, he was the most reprinted Australian writer domestically and overseas until the early 2000s. Yet he is almost completely forgotten in his home country and was little known even at the height of his success.

‘Rated third in the big five of mystery writing (John Creasy and Erle Stanley Gardner in front, Agatha Christie and Simenon trailing), Alan Yates is quite a mystery himself,’ went the opening of a 1963 article in the then popular Australian tabloid magazine, Pix. ‘At 39, he is far and away Australia’s top-selling novelist with 40 million copies of 110 books appearing in 21 languages. Yet nobody in Australia really gives a spent .45 about his work… Few people realise he’s even Australian.’

While Yates was a big seller, the lack of critical recognition given to his books flows mainly from the fact he wrote mysteries and private detective novels for Horwitz Publications, one of the largest of a group of Sydney based pulp publishers that emerged in Australia after 1945. Although reaction to Yates’s work was better in America where he was published by the Signet imprint of the prestigious New American Library, even so, these novels are arguably recalled now more for their stylish and alluring covers by veteran illustrator, Robert McGinnis, than for anything to do with Yates.

Virtually all of Yates’s prodigious output was faux American crime fiction, the most popular genre of pulp published in Australia in the decade and a half after World War II. These books featured mystery and private investigator tales, set in largely mythical versions of US cities such as New York, Chicago and Las Vegas, and heavily influenced by American crime authors such as Raymond Chandler, but perhaps even more so by the stories in the pages of remaindered American pulp magazines dumped in large numbers in Australia before the war. Its success not only spoke to the country’s increasing American acculturation, but deeper social changes underway after 1945.

Australia’s most successful 20th century author was born in the United Kingdom in 1923. He first visited Sydney on leave from the Royal Navy during the war, where he met his wife, Denise. They married in 1946 and lived in the UK, where he unsuccessfully submitted stories for magazines such as Argosy and Strand. He returned to Australia in 1948, worked as a publicist for the national airline Qantas by day, and at night wrote science fiction and romance for a number of local pulp publishers, including Horwitz. 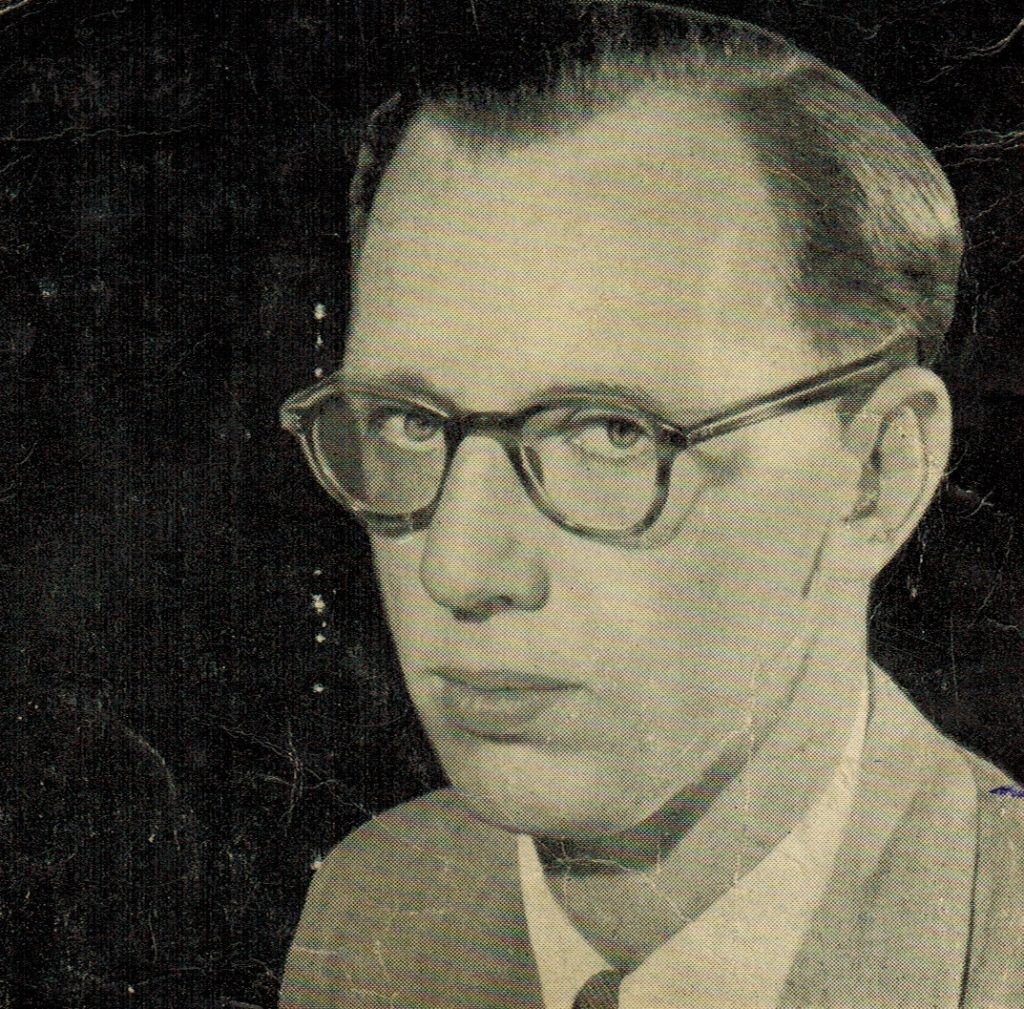 His first Carter Brown crime novel for Horwitz, The Lady Is Murder, appeared in September 1951. On the strength of its sales the company immediately signed him up to pen an ongoing monthly series of two 20,000-word novelettes—a hybrid of the pulp magazine and the novel—as Carter Brown. He subsequently signed a 30-year contract with Horwitz. By the mid-1950s the front cover of his books boasted that he was “the slick story-telling sensation whose [sic] sold ten million copies.” Although it is impossible to verify the claim, when Pix interviewed him in 1963, he was earning £25,000 pounds a year from writing full time (the annual male wage in Australia at the time was £728).

By the mid-1950s the front cover of his books boasted that he was “the slick story-telling sensation whose [sic] sold ten million copies.”

Yates’s international success came after Stanley Horwitz, the entrepreneurial head of Horwitz Publications, pitched his work to NAL publisher, Victor Weybright. Weybright was in the market for a replacement for Mickey Spillane, who became a Jehovah’s Witness following the publication of Kiss Me Deadly in 1952, resulting in a 10-year publishing hiatus. Signet signed the Carter Brown series in 1958, new books and US releases of work previously published in Australia. This helped Yates to get published in France, where the books were released through the crime imprint of prestigious Editions Gallimard, as well as Japan, Mexico, and numerous Scandinavian and Latin America countries.

The Lady Is Murder is remarkably hard boiled by early 1950s Australian standards. American private investigator, Mike Staynes, travels to London to accompany an attractive, rich, art loving widow to recover a painting, part of a valuable set she owns. There he becomes embroiled in a four-way tussle between the police, a vicious criminal gang, members of the underground Nazi movement, and a group of art heisting ex-GIs.

As the series grew in popularity its style become more playful and humorous. By the time Walk Softly Witch! was published in 1955, Yates had perfected his formula. The book, one of the early stories to be re-released in America, finds Carter Brown’s best-known character, Al Wheeler, a lieutenant in the sheriff’s department of the fictitious California town of Pine City, investigating the hit and run death of a local businessman. Suspicion falls on the man’s wife, who could benefit from his generous insurance policy, but there are numerous suspicious suspects. The prose is assured, if not spectacular, and the tone is less hardboiled and more tongue in cheek. The sex is inferred rather than overt, and everything is drenched in 1950s Americana: leopard skin print, scotch whisky, Lucky Strike cigarettes, and Frank Sinatra. 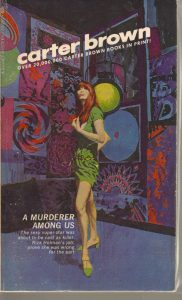 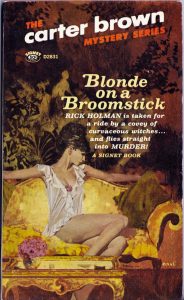 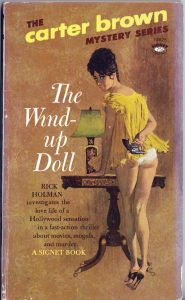 Throughout the 1950s, Yates worked hard, occasionally at his typewriter for 48 hours straight with help of a then legal amphetamine Dexedrine. This pace only increased once he was taken on by Signet. They saddled him with an additional layer of editorial supervision and started pressuring for changes. In particular, his US editors wanted more sex. While Yates was not personally squeamish about matters carnal, Australian censors in the 1950s and early 1960s were, and his books had been banned in the northern state of Queensland and termed obscene in the New South Wales parliament. His US editors were also critical of the authenticity of some of his American settings and Yates’s inability to meet deadlines, concerns which saw US crime writer Frank Kane drafted to rewrite parts of at least four of Yates’s books.

Carter Brown’s success spawned many Australian imitators. From 1953 until the early 1960s, Calvert, a local pulp outfit about whom little is known, published the Carl Dekker series, penned by a number of writers and featuring an American freelance writer and detective who travelled the world solving crime. In 1954, Cleveland Publications bought the rights to a popular local radio show, ‘I Hate Crime’, about a PI called Larry Kent, moved the setting to New York and turned it into a series of books that would continue until the 1980s. Horwitz also commissioned two additional faux American crimes series. Melbourne tabloid news editor, Bill Williams, wrote 80 books as Marc Brody, the name of the main character and narrator, an American newspaper reporter who investigated crime, the first of which Big Shot’s Final Edition, appeared in 1955. Sydney Journalist Audrey Armitage and teacher Muriel Watkins, wrote a series of 22 books in the late 1950s about a tough New York insurance investigator Johnny Buchanan, under the pseudonym K. T. McCall.

Queensland academic Toni Johnson-Woods, one of the few people to have examined the Carter Brown series in detail, argues its popularity is based on its irreverent take on the prevalent style of detective fiction popular at the time. One Australian magazine account in the late 1960s, noted Horwitz was keen “to devise a mystery series which would have Chandlerish overtones but would feature more light-hearted detectives, less kinky and with more liberal sex [by Australian standards], as well as an air of ritzy living. But Lieut. Al Wheeler and other Brown heroes were not to be glamorous or unusually gifted: they had to have a realistic, slightly seedy air to ensure readership identification among males.”

In addition to engaging with the social climate of post war optimism and the growing demand for light-hearted entertainment, the success of faux American crime fiction can be viewed as a proxy for Australia’s growing military ties with Washington in the post-war period at a time in which British political and economic power was on the wane. As local crime fiction scholar Stephen Knight put it in his 1997 book, Continent of Mystery, “The American-based novels of ‘Carter Brown’… followed the culture brought by the American fleet into Sydney, a new imperial force that arrived here with the purposes of defending America’s Pacific dominions, rather than the free world.”

Underlying this was a deeper acculturation to American influence, underway in Australia since the 1920s, when jazz and US films started to appear for the first time.

Underlying this was a deeper acculturation to American influence, underway in Australia since the 1920s, when jazz and US films started to appear for the first time. This continued in the 1930s, and accelerated after World War II, when the country hosted up to a million US service personnel. Yates did not visit the US until 1958, when Signet published the first Carter Brown novel, The Body. His 1983 autobiography, Ready When You Are, C.B.! records his wonder at what he saw: the huge food servings, watching Sammy Davis Junior perform at the Sands in Las Vegas; and the Manhattan cocktail party thrown in his honour by Weybright and attended by luminaries of the New York publishing world.

The least analysed but perhaps most interesting shift underlining the success of faux American crime fiction in 1950s Australia is the degree to which it was associated with changes in Australian sexual culture. The war and its immediate aftermath played havoc with traditional notions of sex and gender. Australian scholars have written about how close contact with American soldiers loosened conventional morality for women. Men similarly had their horizons expanded by their wartime experience. As was the case in the US, this period also saw more explicit publications move from the margins to the mainstream of Australian culture, including the pin up and local men’s magazines modeled on magazines like Esquire.

Carter Brown’s breezy, fast-paced Americanised narratives and salacious full colour over art, infused with thinly veiled sexual narratives and consumerist abandon—much of it targeted at males—tapped directly into this new sensibility. His success can be seen as an early manifestation in Australia of a more masculine hedonistic consumer culture underway in the US since the 1930s, but far slower to reach Australia: a heady, imagined world of travel, adventure, and sexual independence, which allowed men to reclaim a sense of masculine space, free from the post war constraints and responsibilities of family and work. 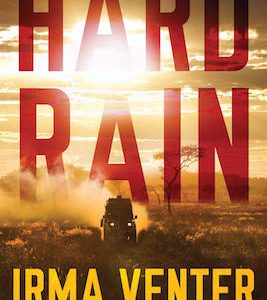 The weather, like sports and movie stars, is always news. Everyone wants to know whether tomorrow will be hot or cold, even...
© LitHub
Back to top