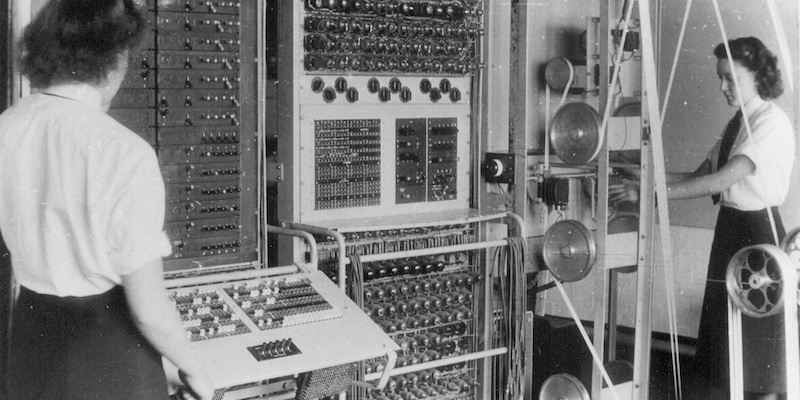 Thousands of women contributed to the codebreaking efforts at Bletchley Park. Few were honored in their time.

“Think Downton Abbey meets Sneakers, but in World War II!” That’s how a Hollywood bigwig might pitch the story of Bletchley Park, a remote English country manor stuffed with codebreakers, all laboring under dire secrecy to break the supposedly unbreakable Axis military codes. But Bletchley Park’s extraordinary achievements are no Hollywood screenwriter’s fever dream; they’re real…and would never have happened without thousands of extraordinary women.

A university campus, a Wonderland, “the biggest bloody lunatic asylum in Britain”: BP, as it was casually known by insiders, resembled all three. A Victorian country house chosen for its remote location and its railway proximity to London, the Park became Britain’s headquarters for codebreaking activity as early as 1939, when Britain was on the verge of German invasion. Enemy intelligence—everything from U-boat hunting orders to Hitler’s private telegrams—was broadcast by radio and encrypted in unbreakable Enigma ciphers. “Unbreakable?” someone at the top undoubtedly scoffed. “We’ll see about that—” and people from all over Britain soon found themselves recruited and summoned to Bletchley Park, where they found themselves tossed into the deep end of the codebreaking pool with an oath of secrecy and a simple “We’re breaking unbreakable Axis codes; grab a pencil and have at it.” They did—so successfully that some historians estimate they shortened the war by as much as two years. By 1944, thousands were part of the codebreaking operation…and women outnumbered men three to one.

By 1944, thousands were part of the codebreaking operation…and women outnumbered men three to one.

These women came from all walks of life: duke’s daughters might find themselves working beside shop-girls, university women rubbing elbows with grammar-school graduates. Sometimes they were chosen for their mathematical or chess-playing abilities; sometimes because of their language or secretarial skills; sometimes just because someone who already worked there had vouched for their trustworthiness—but when they came to Bletchley Park, they found a place stuffed with oddballs and eccentrics, a place filled with interesting women, a place like no other. The work might be boring or it might be exciting, but the atmosphere was relaxed, quirky, accepting. Bletchley Park valued a woman for what she could do, and fostered an environment where female voices could be heard. And during the war, women filled extraordinary roles in the intelligence machine, for example…

…Codebreakers. Mavis Lever, a teenaged university student with a brilliant mind for puzzles, became a star of the all-female team recruited by eccentric scholar-turned-cryptanalyst Dilly Knox, who insisted on recruiting only women because they brought less ego to the table than men. Mavis and the rest of “Dilly’s Fillies” handed Britain its biggest naval victory since Trafalgar when they single-handed cracked the Italian naval Enigma before the Battle of Matapan.

…Y-Station listeners. Betty Gilbert left school at fourteen for a factory job, but spent her war plugged into a set of headphones, recording Morse Code ciphers with dead-level accuracy and ears like a bat. Without women like Betty, Dilly’s Fillies would have had no ciphered traffics to decode.

…Team leaders. Joan Clarke, Cambridge mathematics genius and close friend of Alan Turing, was tasked to the Hut 8 team breaking the fiendishly difficult German naval ciphers. She was the team’s only woman—considered one of the very best in her section, she eventually became Hut 8’s deputy leader.

… Bombe operators. Ruth Bourne, young Jewish trainee in the Women’s Royal Naval Service, spent her war operating the noisy bombe machines which helped cut down the time necessary to break ciphers. Bombes were operated almost solely by young Wrens like Ruth—tense, nerve-shredding work that required incredible focus. “You had to be 125% accurate.”

… Translators. Osla Benning, beautiful Canadian-born debutante who dated a young Prince Philip throughout the war, found herself at the translators’ table in Hut 4 thanks to her finishing school German, translating decoded messages into English and passing them up to British Intelligence to be used in the field. Women like Osla would have had news of Hitler’s suicide before the Prime Minister or the King.

These are just a few of the notable women of Bletchley Park. Thousands of others worked as filers, indexers, Y-station listeners, messengers, and more—and they were good at it. Women raised to be detail-oriented and careful when cutting out dress patterns were just as thorough when it came to matching perforations on Banburismus sheets. Women who had spent years in secretarial pools made great decoders: when they heard “This section is gibberish because the radio signal faded; can you figure out the rest from context?” they said, “For ten years I took dictation for a mumbler in Accounts Receivable; I can figure out anything from context.”

Granted, women at Bletchley Park weren’t common in leadership roles, and they still tended to be paid less than their male counterparts. But most female veterans still looked back with fondness at their BP years, remembering the open-mindedness they found there, not to mention a level of equality with male colleagues which they were less likely to find in professional spheres for years or decades. Neurodivergent women were especially likely to remember Bletchley Park fondly—given the staff tendency to recruit nerds and oddballs, square peg personalities weren’t required to fit into round holes, and women who today might be diagnosed with autism spectrum disorder could contribute to the war effort without being forced to mask their neurodivergence. Bletchley Park tended to appall visting military personnel with its casual attitudes to things like dress, language, and first-naming, but it was in many ways a haven of acceptance.

Bletchley Park might have been staffed largely by women by the end of the war, but it still operated in a man’s world—even now, male codebreakers tend to dominate the stories being told. Titanic figures like Alan Turing, Gordon Welchman, and Dilly Knox deserve all the accolades they have earned in print…but so do the ladies of Bletchley Park, whose achievements still remain largely in the background. These are the stories I wanted to tell in the writing of THE ROSE CODE, which became a tale of female intelligence, female friendship…and the rabbit hole down which so many females tumbled, just like Lewis Carroll’s Alice, to find a Wonderland that valued them not for how they looked or where they’d been born, but what they could do. 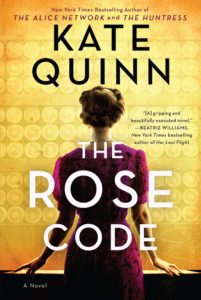 Kate Quinn is a native of Southern California. She attended Boston University, where she earned bachelor’s and master’s degrees in classical voice. A lifelong history buff, she has written four novels in the Empress of Rome Saga and two books set in the Italian Renaissance detailing the early years of the infamous Borgia clan. All have been translated into multiple languages. Her latest novel, The Rose Code, is now available from William Morrow. She and her husband live in San Diego with two black dogs named Caesar and Calpurnia. 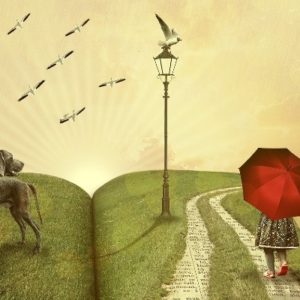 Once upon a time. In a deep, dark wood. In a kingdom far away. These fairy tale beginnings and so much more speak to a place...
© LitHub
Back to top