Cold for the Bastards of Pizzofalcone 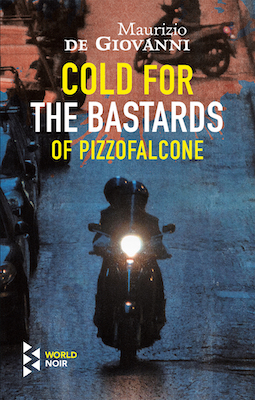 The following is an exclusive excerpt from Cold for the Bastards of Pizzofalcone, the third book in Maurizio de Giovanni’s Napoli-set “Bastards of Pizzofalcone” series. Inspector Lojacono and his team are investigating a gruesome double homicide, only to be challenged by a slew of local opponents looking to thwart due process.

As soon as he entered the apartment that shared an entrance with that of the victims, it became clear to Lojacono why Officer Stanzione had been so vague in his use of pronouns to refer to its occupants.

It didn’t even slightly resemble the apartment where the double homicide had taken place. Immediately beyond the front door there opened out a large room, illuminated by a set of French doors that led out onto a balcony. The furnishings were rather garish, with pink fabrics, lace, toy stuffed animals scattered here and there, and spindly lamps perched precariously on teetering bases.

Sitting at a steel-and-glass table was a skinny young man wearing glasses. He kept brushing his long, silky bangs out of his eyes. His lips were trembling; on his cheeks, two ruddy patches betrayed the intensity of his emotion.

Standing next to him was an odd-looking young man, wearing a sort of ankle-length tunic that was decorated in garish geometric patterns. He had long hair, tied up in a ponytail, and he was barefoot. His eyes were hazel-colored and lightly made up.

Standing off to one side, as if embarrassed, was a third young man, short and dressed in black, with a couple of ostentatious piercings on his ears and nose.

Stanzione, who had accompanied Di Nardo and Lojacono into the apartment, said: “Lieutenant, this is the young man who found the corpses and called 911.”

Lojacono waited for the officer to point to one of the three young men, but nothing happened. He finally turned to Alex and said: “Di Nardo, will you explain to this officer that he needs to be more specific, or do I need to draw him a diagram so he can understand that I’m looking at three young men?”

The young man sitting at the table raised one trembling hand, like a student who knows the answer to a question but lacks the nerve to speak up.

He was clearly in a state of disorientation. His voice was faint to start with, and it lurched into a falsetto that he tried to conceal with the occasional fit of coughing. Lojacono scrutinized him for what struck him as a reasonable period of time.

The one wearing the tunic broke in; he had a deep voice and a strong Pugliese accent.

“Renato, don’t answer him. These guys will trip you up at every turn. Didn’t you notice? This guy didn’t even tell you his name.”

Officer Stanzione snarled: “Oh, nasty thing, don’t you dare, you hear me? It’s already a mystery to me why you aren’t in prison, the way you look. Speak respectfully!”

“You don’t scare me, understand? I’m not afraid of you, officer. If anything, you’re in our home with no warrant or just cause. You should just be grateful that we allowed you in without asking to see your badge, but instead you continue to show no consideration, in spite of the trauma that we’ve just suffered.”

“You should just be grateful that we allowed you in without asking to see your badge, but instead you continue to show no consideration, in spite of the trauma that we’ve just suffered.”

That was more than Stanzione could take. Red-faced, he strode one step forward, shouting: “You piece of shit faggot, I’ll break that makeup-smeared face of yours in half—”

Alex grabbed Stanzione by the wrist with surprising strength, catching the officer off guard: “Shut your mouth, you idiot. Don’t you realize that this guy could file a complaint against you, and he’d have every right?”

Lojacono raised both hands in a peacemaking gesture, and in his turn took a step toward the young man in the tunic, strategically placing himself in front of Stanzione: “I apologize, sir, and I’m sorry. These are difficult situations for anyone, trust me. No one ever gets used to this kind of thing. I’m Lieutenant Giuseppe Lojacono, from the Pizzofalcone police precinct. My colleague is Officer Alessandra Di Nardo. There’s no need for me to introduce the other officer because he was just leaving. He’ll rejoin his colleague downstairs in the street where he can wait for the forensic squad to arrive, isn’t that right?”

The young man in the tunic blew a puff of air upward to get his bangs out of his eyes and introduced himself: “Pleasure to make your acquaintance. I’m Vinnie Amoruso and I live here with my friend, Paco Mandurino.”

He pointed to short man dressed in black, who nodded his head.

Lojacono turned and spoke to the one who had found the dead bodies: “What about you? What’s your name, and how did you happen to be in the apartment across the way?”

The young man opened his mouth, closed it again, heaved a deep breath, and then said: “My name is Renato Forgione. I’m a friend . . . a colleague and a friend of Biagio’s. Yesterday he didn’t show up on campus, and I waited for him all afternoon. His phone wasn’t picking up, or maybe it was turned off, and this morning . . . Oh my God, I’m going to throw up again . . . ”

As if seeking protection, as he uttered these last words he looked up at Vinnie, who was gently patting his shoulder. He ran a hand over his face, looked at Lojacono again, and went on: “We talk all the time, we work together, we’re working on projects together at the university. I was worried, he’s not the kind of guy who just vanishes . . . he never disappeared like that, it was a strange thing. So I came here. The door was ajar, I went in, and then I found . . . I found them . . . Excuse me—”

He stood up and rushed into the bathroom.

Lojacono asked Amoruso: “Did you know the two victims?”

The young man had loosened his ponytail and now he was toying with the clasp: “We still can’t quite believe it, Lieutenant. I mean, who, who could have done such a thing? In any case, their names were Biagio and Grazia Varricchio, they were brother and sister. They were Calabrians, from a town near Crotone. He was the older brother, a fine young man, a colleague of Renato’s, a researcher, with a degree in biochemistry, I think, or maybe it was biosciences, something of the sort, I don’t understand much about it. He’d been living here for some time, longer than us, and when is it we moved in? Two years ago?”

The one dressed in black, who still hadn’t uttered a word, broke in: “Two years and ten months, Vinnie.”

Amoruso raised a hand to his mouth in exaggerated surprise: “Oh, mamma mia, already so long? The two of us study law. We’re in no hurry to graduate, I will admit that, but we know enough to defend our rights.”

Lojacono resumed: “You said that he’d been living here for some time; what about his sister?”

Vinnie shook his head, decisively: “No, his sister only moved in a couple of months ago.”

Once again, Paco broke in: “Seven months ago.”

Vinnie shot him a harsh and irritated glare, very briefly, and then turned his eyes back to the lieutenant: “If Paco remembers it so clearly, then it must have been seven months.”

In the meantime, Forgione had returned from the bathroom, pale as a rag and every bit as rumpled. Alex took advantage of the opportunity to weigh in, beating Lojacono to the punch. In a rush she said: “You said that the door was left open. Are you talking about the door to the landing or the inner door to the apartment?”

“The front door of Biagio’s apartment. Vinnie answered the door on the landing.”

Turning her gaze to Vinnie, Alex kept up her questioning: “Didn’t you notice that the door was open? Didn’t you hear any noises, no shouts, nothing?”

Vinnie replied without hesitation: “Yes, Signorina, we did, but not yesterday evening. Yesterday afternoon. There certainly had been an argument. One of the voices was Biagio’s, the other voice belonged to a man I’d never heard before, and they were speaking in dialect. Then we heard someone leave and Paco looked out into the hallway. But the door was shut.”

Lojacono looked at the young man dressed in black: “Are you certain?”

“And you didn’t see the person who left?”

Upon hearing this account of the quarrel, Renato had opened his eyes wide and his lips had started trembling again. Alex and Lojacono exchanged a glance, then Di Nardo looked hard at the young man: “And you have no idea who the other man might have been? Biagio didn’t say anything to you?”

Lojacono tried reframing Alex’s question: “Signor Forgione, did you know if Varricchio was expecting a visitor?”

Forgione didn’t even seem to hear him, and kept his eyes glued on Vinnie. All right then, let’s give Vinnie a try, the lieutenant thought to himself.

Vinnie nodded his head: “I couldn’t understand a word they were saying. It’s not like I was trying to eavesdrop, they were just shouting so loud. I don’t think Grazia was there though, or if she was, she sure wasn’t saying anything.”

“Yes, Biagio was expecting a visitor. He’d mentioned it to me in the past few days. More than expecting it, he was fearing it.”

Lojacono persisted: “Do you mind telling me who he was expecting?”

“His father. He was expecting a visit from his father, from his village back home.”

“You said that he was afraid of that visit. Why?”

Renato said nothing for a few seconds, running one hand disconsolately across the glass tabletop. When he looked up to answer, he had a profoundly sad expression on his face.

“He hadn’t seen him in almost seventeen years. His father represented a part of his life that he’d done his best to forget.

The idea of a confrontation with him was something that scared him more than anything else in the world.”

His words were met with silence. Paco and Vinnie seemed to be trying to find a way to comfort their friend. It was Lojacono who interrupted the lengthy pause: “Why hadn’t he seen him in such a long time? Had they argued, was there a separation, some problem with money?”

“No. Biagio’s father was in prison, for sixteen years. He got out about a year ago.”

“And do you know why he had been sentenced to prison?” Alex asked.

Renato turned toward her and answered in a whisper: “Murder.”

Behind the Scenes of the True Crime Podcasting Boom


Cold for the Bastards of PizzofalconeEuropaMaurizio de Giovanni 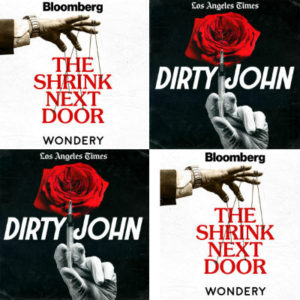 Behind the Scenes of the True Crime Podcasting Boom Marshall Lewy, Chief Content Officer of Wondery, first worked with the network as an Executive Producer on Dirty John, the hit podcast...
© LitHub
Back to top