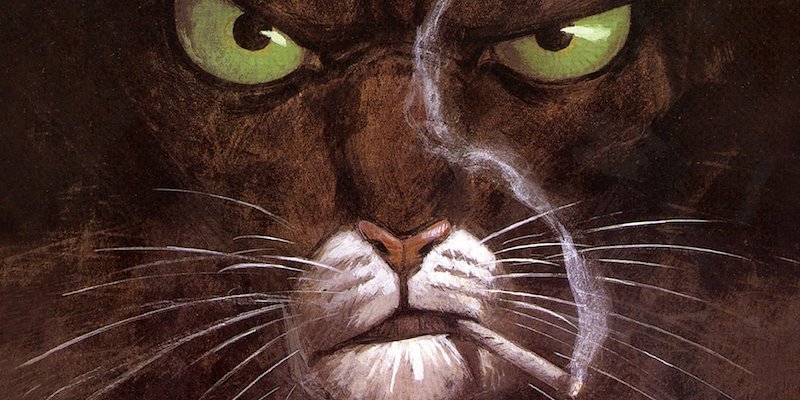 A Walk Down The Mean Streets of Comic Book Noir

In honor of my novel The Con Artist coming out in July, which is a prose mystery about a famous comic book artist accused of murdering his editor at a comic con in San Diego, I asked Crime Reads if I could do a recommended reading list of the exact opposite—incredible comics that are themselves mysteries.

Crime is a huge genre in comic books, and has been ever since Crime Does Not Pay horrified anti-funnybook crusader Dr. Fredric Wertham back in the 1940s. But in order to keep this list even somewhat manageable, I had to limit it to strictly mysteries—somebody’s been killed, or kidnapped, or something’s been stolen, and the hero has to figure out the who’s, what’s and the why’s. No crime comics, no thrillers.

(Side Note #1: I always say the Crime, Mystery and Thriller genres are all part of the same three-sided coin: a Mystery is the crime from law enforcement’s point of view, the Crime story is, of course, from the criminal’s point of view, and a Thriller is from the victim’s point of view. In the cartoon animal hierarchy of who’s chasing whom, that would be: Mystery :: Dog –> Crime :: Cat –> Thriller :: Mouse. You can use that analogy whenever you like for free, Crime Reads. You’re welcome.)

In the cartoon animal hierarchy of who’s chasing whom, that would be: Mystery :: Dog –> Crime :: Cat –> Thriller :: Mouse.

Another basic rule: No adaptations from other media. So no Darwyn Cooke’s Parkers, no Nancy Drews, no Sherlock Holmes. Everything on this list is pure comics.

Also: No Watchmen. It’s fascinating the most-read superhero graphic novel is also a murder mystery (Who killed the Comedian?) and I don’t know about you, but I think we’re all a little sick of hearing about freaking Watchmen, aren’t we?

(Side Note #2: When starting on this article, I solicited advice on which titles I should include from fans on my Facebook page, and was overwhelmed by awesome responses. I got many suggestions from classic 1980s detective titles—including, but not limited to The Maze Agency, Nathaniel Dusk, Ms. Tree, Dakota North, Detectives, Inc. I hoped to include a wide selection of those comics here but I was shocked to discover that all were out of print and unavailable digitally. Someone should correct this archival gap in comics history immediately if not sooner!)

Without further side notes, here’s the listicle I landed on. Happy sleuthing! 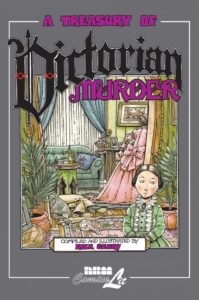 For years the insanely talented cartoonist Geary has been recreating the most famous murders of the 19th century with his adorable pasty-faced Victorians stabbing, shooting and poisoning each other. He deals with assassinations of three U.S. presidents and famous serial killers like the “Beast of Chicago,” H.H. Holmes, but my favorites of his are the true who-done-its, the unsolved cases, such as the baffling murder of Mary Rogers, which inspired Edgar Allan Poe to write the second-ever mystery story of all time, “The Mystery of Marie Roget.” Geary sets out the suspects, describes the scene of the murder, and gives maps and other clues to see if you can solve it yourself. C’mon, the true identity of Jack the Ripper can’t be that hard to figure out, can it? 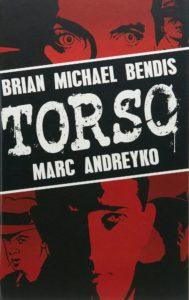 Another true crime selection, with the irresistible Elevator Pitch of Eliot Ness trying to catch Cleveland’s first serial killer, who has a fondness for dumping gay men’s dismembered midsections in the city’s meadows and waterways. As a former Clevelander myself, I got a huge kick out of all the local references and Bendis and Andreyko do such a great job of evoking the period, and the pressures Ness was under, post-“Untouchables”, to clean up the Mistake By the Lake, that it makes me wish Bendis would do more historical fiction. His blocky, stylized art only adds to this tale’s oppressive atmosphere of paranoid dread. 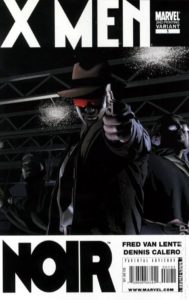 Jean “Phoenix” Grey is dead, which is not news to X-Men fans, but this time, we don’t know who did it: Was it her boyfriend, sharpshooter Scott “Cyclops” Summers? Or the lover she was two-timing him with, the claw-wielding bootlegger with anger management issues called Logan? This series wonders what Marvel’s merry mutants would have looked like had they been conceived as a crime instead of superhero series. The mysterious Charles Xavier, “the Professor of Crime”, runs a home for juvenile delinquents in Westchester Country that trains criminals instead of superhuman mutants, and is bedeviled by Detective Erik Magnus’s network of corrupt cops, the Brotherhood. Calero’s moody, photorealistic art perfectly blends the two genres, and the writer is extremely good-looking and clever. 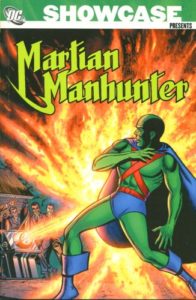 DC, as many of you reading this article likely know, stands for “Detective Comics,” one of the publisher’s first titles, which in itself should show you how popular the mystery genre once was in the medium. Batman—aka “The Dark Knight Detective”—is the most famous sleuth to premiere in its pages, but my personal favorite is J’onn J’onnz, the Manhunter from Mars, who began life as a backup feature for Bruce Wayne in the November 1955 issue. Stranded on Earth by a dumbass scientist who promptly dies after accidentally teleporting him to our world, J’onn decides to resume his Martian career as a police officer by shape-shifting into a dull-looking white dude to solve all sorts of impossible crimes with the writers’ ability to give him a new superpower in every story (encompassing, but not limited to, invisibility, becoming insubstantial, telepathy, super-breath, oh God I could go on but I would demolish this article’s word limit). J’onn has since gone on to become little more than Green Superman, which is kind of a bummer, as I wish he’d go back to his Detective Comics roots, but as most people know him only as Mr. Spock in Justice League cartoons, that seems unlikely. 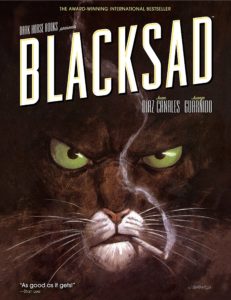 From alien detectives to feline ones seems like a natural segue, though it directly contradicts my cartoon analogy in Side Note #1, above. John Blacksad is a private investigator in a hardboiled world populated by beautifully-illustrated animal-people: he’s a cat, the crusty police inspector is a German shepherd, the mobster’s assassin is a serpent, the local white supremacist leader is a polar bear—you get the idea. Think Who Framed Roger Rabbit, only with bare boobs and no human characters. The actual content of Blacksad’s adventures is pretty by-the-numbers noir stuff—the second episode is largely lifted whole cloth from the Douglas Sirk classic Imitation of Life —but who cares when everything looks this face-meltingly gorgeous? 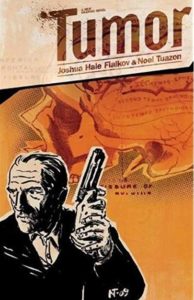 A washed-up private eye is diagnosed with a brain tumor at the same time he agrees to track down a mob boss’s missing daughter. As his condition deteriorates, his memories of his past begin bleeding into his experiences of the present and the “mystery”, for him, becomes untangling one from the other. Take note, Westworld: I love you, but this is you do multiple conflicting timelines, executed flawlessly through best advantage of the comics medium by Fialkov and Tuazon. 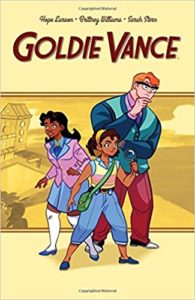 Busybody teenagers may be super-annoying in real life, but they sure make great fictional detectives. When she’s not parking cars at the luxury hotel her father manages, Goldie Vance helps its big galoot of a house dick solve its myriad crimes, and soon finds herself somewhat over her head tracking down a stolen necklace with a mysterious engraving on its back. A YA graphic novel set in an idealized 1950s Florida that has drive-ins, Cold War spy-jinx, but no Jim Crow, Goldie and her diverse pals are brought to vivid life by Larson’s terrific ear for dialogue and Williams’ stunning artwork. 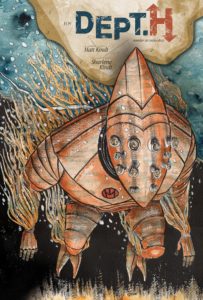 Outer space explorer Mia has to suit up for a different kind of hostile environment when she descends into the oceans to investigate her father’s murder on a cutting-edge undersea base. A classic “locked room” mystery several thousand feet below the waves (read the whole title as one word), everyone on the base is a suspect, including Mia’s former best friend and her own brother. Kindt’s mixed-media, try-anything style, which served him so well on his previous Dark Horse series Mind MGMT, is enhanced by wife Sharlene Kindt’s painted colors. 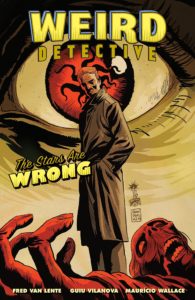 HP Lovecraft meets Law & Order in another genre-bender: NYPD Detective Sebastian Greene is on the trail of a serial murderer known as the “Juice Box Killer” because of the way he sucks out the insides of his victims, then crush them, leaving just the exterior skin behind. He strongly believes these crimes to be the work of an unspeakable horror from beyond space and time — mostly because he just happens to be an unspeakable horror from beyond space and time himself. This fact he desperately does not want his sharp-as-needles partner, Det. Sana Fayez, to find out, though she has some secrets of her own… (Yes, I included two of my own books on this list. I am a professional writer, I have killed that part of me which feels shame.) 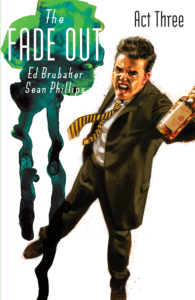 My favorite of the impressive Brubaker/Philips noir oeuvre is a rare stone-cold whodunnit for them, set in late 1940s Hollywood in which noir was king. The studio propaganda machine has to rev into overdrive when one of their most promising starlets commits suicide — except an ethically-challenged screenwriter knows she was murdered, because he woke up next to the body after a blackout bender. Connoisseurs of classic Tinseltown scandal will go bonkers for this book, which blends everything from sex cults to SAG president Ronald Reagan’s Commie witch hunt into a tale that manages to gently unfold successive layers of depravity while being an addictive page-turner at the same time.

Fred Van Lente is the #1 New York Times best-selling writer of the comics Odd Is on Our Side, Archer & Armstrong, and Action Philosophers! In 2017 Van Lente branched into the world of prose with his debut novel, the stand-up murder mystery Ten Dead Comedians. His follow-up novel, The Con Artist, set in the comic book industry, is out July 2018.

Megan Abbott Wants to Be Part of the Mystery 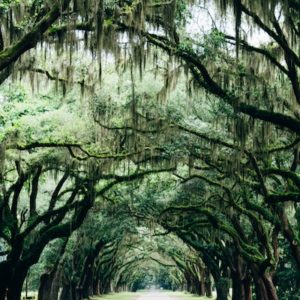 A decade ago, when I sat down to write what would become my first published novel, I didn’t think about genre. I didn’t...
© LitHub
Back to top