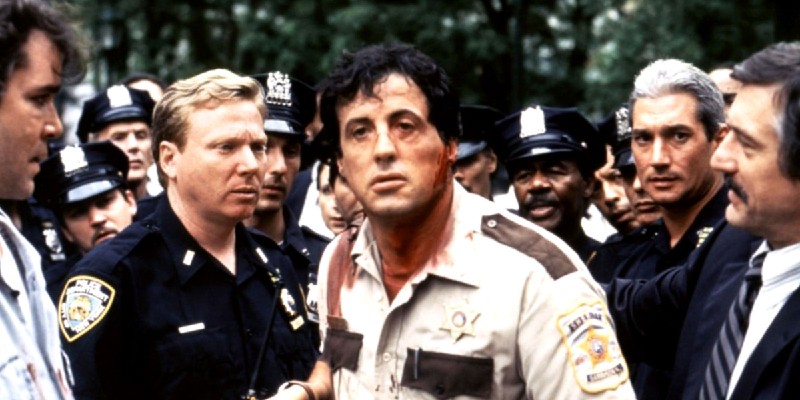 The 1997 film from James Mangold was part western, part noir, and a deeply nuanced portrait of America.

When Cop Land came out in August of 1997, the vast majority of attention was, understandingly and deservedly, given over to star Sylvester Stallone’s turn as sad sack suburban sheriff Freddy Heflin, a role which required the Italian Stallion put on 40 pounds and dig deep into his acting chops—something he hadn’t really done since First Blood, 15 years earlier. It was widely hailed as his finest performance since the original Rocky, if not ever, and for a long time afterwards, Cop Land was best remembered as the movie that should have nabbed Sly an Oscar for Best Actor (or at the very least, a nomination), but not much else.

Twenty-five years on, however, the tide has slowly, but surely turned. Today, while it remains underrated and underseen, Cop Land nonetheless stands tall as one of the last great neo-noirs of its era, a provocative story about the American police state and a gritty crime thriller with mythic overtones.

The sophomore feature from James Mangold, who would go on to become one of Hollywood’s most reliable populist directors, the film is set in the small New Jersey town of Garrison, a place that resides, literally and figuratively, in the shadow of New York. A group of dirty cops from the NYPD’s 37th precinct, led by Lt. Ray Dolan (Harvey Keitel), have exploited a legal loophole that allows them to work in the city while living across the Hudson. There, Dolan has installed Heflin, a local hero who many years ago saved a young woman from drowning, losing his hearing—and thereby his dream of joining the NYPD—in the process, as the Sheriff, knowing that he’ll always turn a blind eye to the dirt he and his crew conduct in the open. Things change when Dolan’s nephew and fellow cop, Superboy (Michael Rappaport), shoots and kills two unarmed black men in a traffic altercation. Dolan secrets Superboy into Garrison, where he intends to kill him before Internal Affairs can get their hands on him. When Heflin realizes what Ray and his crew are planning, he’s finally forced to take a stand.

As previously mentioned, Stallone’s performance got all the attention when Cop Land first came out, and for good reason. Like his most famous onscreen persona, Rocky Balboa, Stallone plays Helfin as someone who initially comes off as a morose, muscle-headed simpleton, before gradually revealing the deep and complex layers of his wounded soul. It’s a powerful and empathetic turn, one that has him—to borrow a cliché from Rocky—going all twelve rounds with some of the finest actors of his generation.

Speaking of, for as great a showcase as Cop Land is for Sly, it’s really an ensemble drama. And what an ensemble it is. There’s an argument to be made that, pound for pound, it has the best cast of any movie from its decade. Said cast includes Keitel in one of his most subtly menacing roles (speaking of: is there any American actor who has better embodied our conception of the crooked cop?), Robert De Niro in small but memorable part as a manipulative Internal Affairs investigator, and especially the late, great Ray Liotta in what has to be his second best performance of his career (after Goodfellas) as a member of Dolan’s crew whose guilty conscience and addiction issues are rapidly pushing him to his breaking point.

The rest of the cast is stacked with some of the best or at least most recognizable character actors of the last several decades, including the aforementioned Rappaport in what’s definitely his best performance, as well as Robert Patrick, Janeane Garofalo, Peter Berg, Annabella Sciorra, Noah Emmerich, John Spencer, Frank Vincent, Paul Calderon, John Doman, Debbie Harry (her scene unfortunately cut out of the theatrical release), Robert John Burke, Method Man, Tony Sirico, Eddie Falco and more.

(You’ll notice several of those names, including Falco, Sirico, Vincent, Burke and Sciorra, would all end up in The Sopranos two years later. In fact, there are 11 total actors in Cop Land who would land roles in that game-changing series.)

For as much as it is a character driven drama, Cop Land is also a movie with a clear and sharp political POV, one which shines its interrogation lights on the inherent and bone-deep corruption of American policing. It doesn’t merely paint said corruption in broad brush strokes of overt criminality—the murders, bribes and drug running that Dolan and his unit routinely engage in—but in the more quotidian aspects of The Job: the cultish insularity, sense of entitlement, and systemic racism of both officers and their families.

Many of the crime films of the late ’80 through the early Aughts—especially those that came in the aftermath of the Rodney King beating and the L.A. Riots—were deeply interested in examining the rot at the core of police culture. This is evident in any number of films from that time, including The Big Easy, Do the Right Thing, Deep Cover, Bad Lieutenant, L.A. Confidential, Training Day, Narc, Dark Blue and others. Granted, with a few exceptions, these movies were greatly overshadowed by the more escapist (and usually reactionary) cop movie fare of the time, so rewatching Cop Land today, in a post-Rampart, post-George Floyd, post-BLM, post-Defund, post-Uvalde America, it’s tempting to say it was ahead of its time, when in fact it was very much of its time.

And yet, Cop Land also has a timeless quality. Along with its New Jersey setting, it has the same small, yet mythic resonance of one of the Bruce Springsteen ballads that appropriately appears on its soundtrack—all broken dreams, broken promises and broken spirits painted in neon bar lights and back alley shadows. Like those Springsteen ballads, Cop Land is very much influenced by two pillars of American cinema: the western and the film noir.

These genres shared a lot of overlap, especially in the post-war decades, when many an oater swapped the cramped concrete jungles of the big city for the barren badlands of the American frontier, while keeping the paranoia, moral ambiguity and inescapable fatalism found in the urban crime film. One of, if not the most iconic example of this is 1951’s High Noon, the controversial, anti-McCarthyite western in which Gary Cooper’s desperate sheriff has to make a one-man stand against a posse of violent criminals after everyone in his town turns their back on him.

This is the arc of Freddy Heflin in Cop Land, and his final, brutal and silent—Mangold brilliantly drops all sound, save for a low ringing tinnitus, to match Freddie’s newly deafened state—showdown manages to outdo the older, more iconic film.

In terms of its noir, it would be easy to compare Cop Land to the gritty neo-noirs of the 70s, especially since its cast is fronted by several actors who came to prominence during that decade. However, the example it truly shares the most in common with is a film not usually regarded as part of the genre: It’s a Wonderful Life.

Frank Capra’s perennial holiday classic has a reputation of being a work of pure schmaltz, when it’s really the exact opposite. As emotionally devastating a story of disappointment and regret as has ever graced the screen, the last third of that film—in which suicidal banker George Bailey (Jimmy Stewart) is shown a vision of what the world would be like if he’d never been born—is a straight shot of pitch-black noir. Cast in heavy shadow and neon decadence, the increasingly desperate Bailey finds the former peace of his hometown of Bedford Falls, now renamed Pottersville after the town robber baron, transformed into a seedy urban hellscape that feels transported from the most rococo of crime movies from the time. For those coming to the film expecting a piece of fluff, this section is brilliantly jarring.

Still, it may seem a stretch to compare It’s a Wonderful Life with Cop Land, but once you start looking at them side-by-side, the connections become quickly evident. Like George Bailey, Freddy Heflin is a man whose life is defined by the things he hasn’t done. Both men dreamed of shaking off the shackles of their small, sheltered communities and making their way in the larger world, only to find themselves stuck behind—in large part because of their brave choice to save a drowning victim, which resulted in the partial loss of their hearing—playing resentful servants to institutions that nearly end up killing them. Both men are constantly falling under the thumb of the corrupt town power broker, and both have to be manipulated by a higher power—a lovable angel and an asshole rat squad lieutenant, respectively—into making the tough choices that will set things in their community right.

But the thematic tissue between the films runs deeper than just the similarities between their heroes. It would be wrong to call It’s a Wonderful Life a pessimistic movie—it works extremely hard to earn its redemptive and optimistic ending—but it is a movie that recognizes how easily the human spirit can be corrupted. Without the moral guidance of one man, Bedford Falls falls immediately into vice and depravity, implying that underneath its picture-perfect postcard idyll lay its denizens true dark desires.

In this way, Cop Land’s Garrison is both Bedford Falls and Pottersville at once, a place where the clean, quiet surface is just a cover for the foundation of avarice and murder upon which it’s been built. Unlike George Bailey, Freddy Heflin can’t set things back to right, because they were never right to begin with. He can only hope to help build something better after first blowing it down. 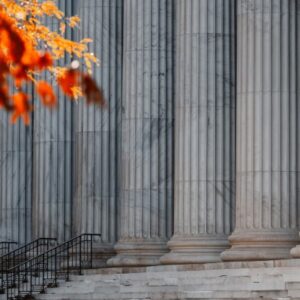 While crime novels, especially those with courtroom scenes, are the most satisfying to read, they’re the most challenging...
© LitHub
Back to top