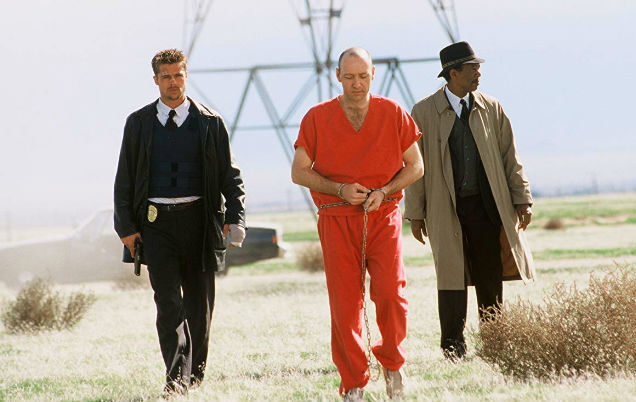 The most controversial element of this exceptionally dark film did not begin its controversy with audiences and critics but was a major contretemps within the studio before production began. Attempting not to give away too much, let’s leave it that it involves a shocking final scene. New Line Cinema rejected the screenplay, demanding that Andrew Kevin Walker rewrite to make the ending more palatable for audiences. He wrote a more traditional cop-movie ending that was a little more upbeat. However, when the screenplay was sent to David Fincher, who the studio wanted to direct, the original draft was sent by mistake. Although Fincher was not interested in directing anything at the time, he was so intrigued by the script, which he described as “a meditation on evil,” that he agreed to do it. Producer Arnold Kopelson wanted no part of the original ending but Brad Pitt, a major player, argued for it, threatening to leave the project if it were changed. The film was released (very successfully, being the seventh—ironically– highest grossing film of the year) but most television appearances have edited out part of the horrific ending. 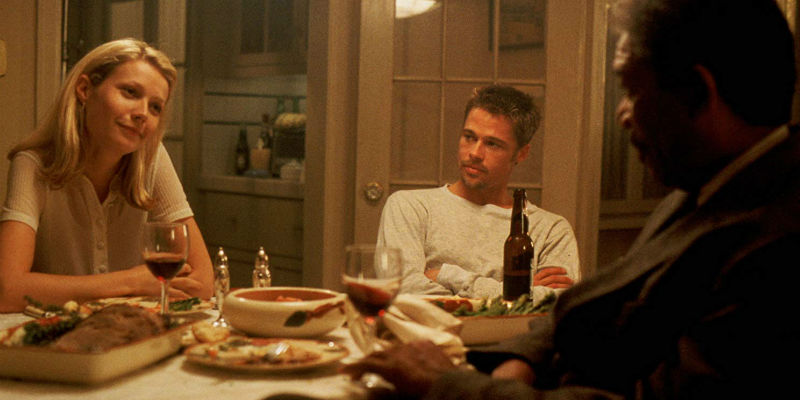 Detectives David Mills and William Somerset are on the trail of a psychopath, named John Doe by the cops, who has been committing murders inspired by the Seven Deadly Sins. For gluttony, a man was forced to eat until his stomach ruptured. For greed, another had a pound of flesh removed from his body before he was killed. For sloth, a drug dealing child molester is found strapped to a bed, starved and badly emaciated, with photographs illustrating how his regression occurred over the course of a year. Following various clues, the detectives are closing in on the serial killer but he runs. They chase him but he escapes when he pulls a gun. They race to what they believe will be the locale for the next crime but arrive too late to prevent a murder based on lust: a man who was forced to rape and kill a prostitute with a strap-on fitted with razor-sharp blades. The next day, they arrive at a crime scene representing pride: A beautiful model has had her face mutilated after being given the choice of killing herself with an overdose of pills or having her face viciously disfigured. Doe turns himself in and offers to take the detectives to the scene of the last two murders. They drive to a remote desert locale but there does not appear to be any evidence of violence. Then a van arrives at the scene and delivers evidence that Doe had killed Mills’s wife for the sixth deadly sin: envy. Mills goes berserk and shoots Doe, fulfilling the seventh deadly sin: wrath.

This was the first major film for New Line Cinema, which went all-out to prove that it could attract the top talent in Hollywood, and they didn’t have an easy time of it as several “A” list actors turned down key roles. Brad Pitt was paid seven million dollars for playing David Mills, a role that had been turned down by Denzel Washington, who found it “too dark and evil.” After seeing the film, he admitted that he regretted his decision. Sylvester Stallone also turned down the role, and also admitted that he’d made a mistake. They had company. Val Kilmer turned down the role of John Doe before it was offered to Kevin Spacey, and Al Pacino rejected the role of Somerset, mainly due to scheduling conflicts. Gene Hackman declined the same role because the film had too many night-time shoots on its schedule. Robert Duvall also didn’t want to play Somerset. Guillermo del Toro passed on the chance to direct the film because, he said, as a romantic, he didn’t subscribe to the script’s dark view of the world. Previously, David Cronenberg declined the chance to direct. Gwyneth Paltrow turned down the role of Tracy Mills but was talked into taking it by her boyfriend at the time—Brad Pitt.

Lieutenant Somerset, at the end, quoting Ernest Hemingway: “The world is a fine place and worth fighting for. I agree with the second part.”

Counting Down the Greatest Crime Films of All-Time: #103 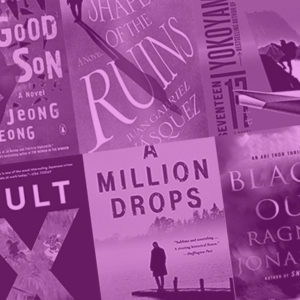 While every nation has its fair share of both crime and crime fiction, there are certainly some hotspots. The American love...
© LitHub
Back to top