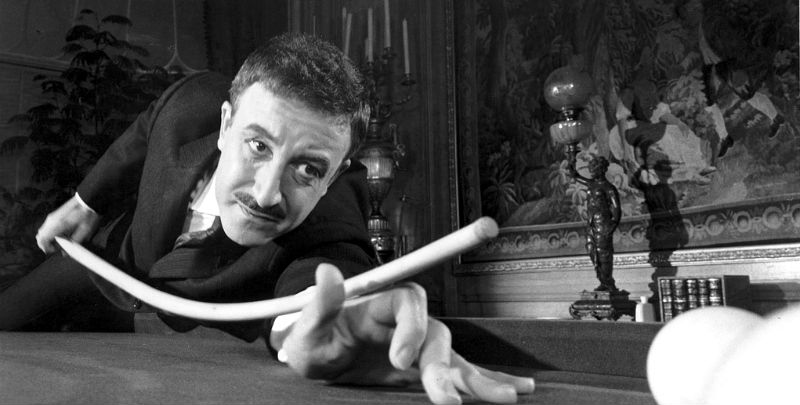 A Shot in the Dark (1964): A Madcap Peter Sellers Mystery

Although it is a hilarious film, A Shot in the Dark produced one less-than-hilarious result. As the pratfalling Inspector Jacques Clouseau, Peter Sellers insisted on performing most of his own stunts, falling repeatedly, banging into walls and doors, and fighting with his valet in extremely lively battles. The strain of this relentless activity was largely responsible for Seller’s serious heart attack, which stopped him from working for a long time. He did not take on the rigors of another Pink Panther movie for eleven years. 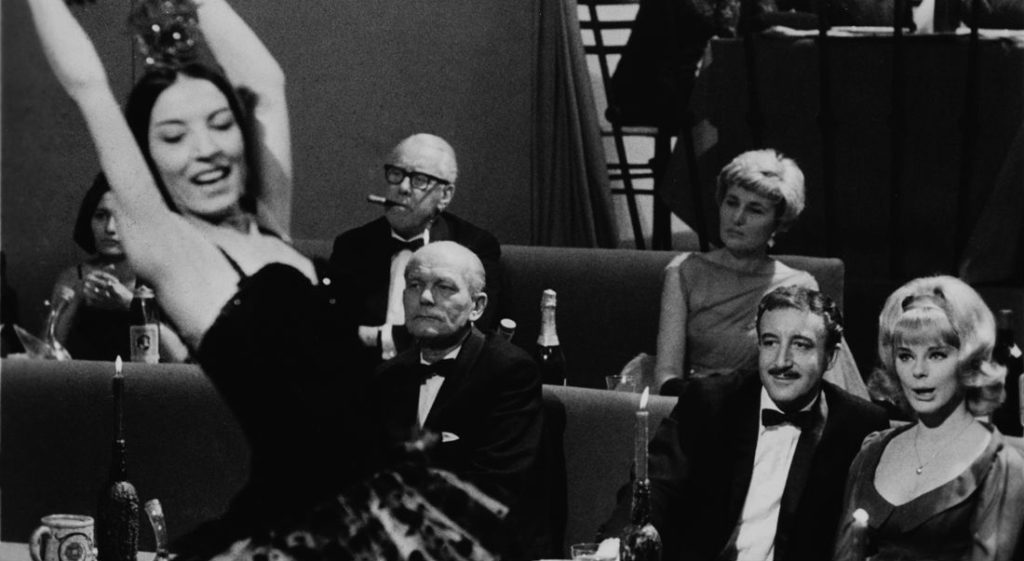 The famously inept Inspector Jacques Clouseau is accidentally assigned to a very important murder case—to the shock and dismay of his superior, Chief Inspector Charles Dreyfus. Maria Gambrelli, the parlor maid of the prominent Benjamin and Dominique Ballon, is the likely suspect in the murder of her lover, but Clouseau believes her innocent and refuses to arrest her. Dreyfus removes him from the case and jails Maria, but powerful influences force Clouseau back onto the case and he immediately has Maria released. She returns to her job and is immediately found, murder weapon in hand, with the dead gardener. Arrested for murder again, Maria is released by Clouseau, who still believes in her innocence. Maria next visits a nudist colony followed by the uncomfortable Clouseau. Another corpse turns up, but Maria is not arrested. When Lefarge, the Ballon’s butler, is murdered, Maria is again arrested; still undaunted by the evidence, Clouseau releases her.

Later, Clouseau takes Maria nightclubbing. Several attempts on his life are made while he is oblivious to the innocent bystanders who are accidentally murdered in his stead. Clouseau becomes convinced that he knows who the real murderer is and gathers all the suspects in the Ballon house. They take turns blaming and accusing each other of the murders until the lights go out and all six make a run for it, piling into Clouseau’s car. It explodes, as a bomb had been placed in it in yet another attempt to kill him. Only he and Maria survive.

A Shot in the Dark is the sequel to The Pink Panther, made earlier in the same year and equally hilarious. The comic brilliance of Peter Sellers made the bungling Clouseau one of the most memorable screen detectives of all time, in spite of the fact that several of the later films were absolutely dreadful.

The third film in the series, Inspector Clouseau, did not come out until 1968, but it starred Alan Arkin as Clouseau and was a failure, as Sellers had already been so closely identified with the role.

If you look closely at a Shot in the Dark, you will see a photograph on the wall of Clouseau shaking hands with General Charles De Gaulle.

In addition to Sellers’s memorable portrayal, the series is remembered for the cartoon character who appears with the opening credits and went on to have a life of his own as a Saturday morning cartoon series, and for the very famous and perfectly appropriate score by Henry Mancini.

Chief Inspector Charles Dreyfus, contemplating the havoc caused by the unimaginably stupid detective: “Give me ten men like Clouseau and I could destroy the world.” 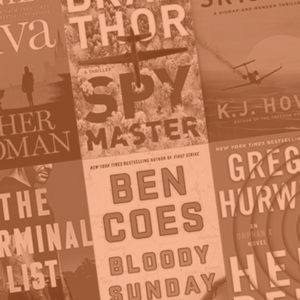 As I said in my December column, 2018 was a special year for thrillers. Readers were treated to new books from some of the biggest...
© LitHub
Back to top