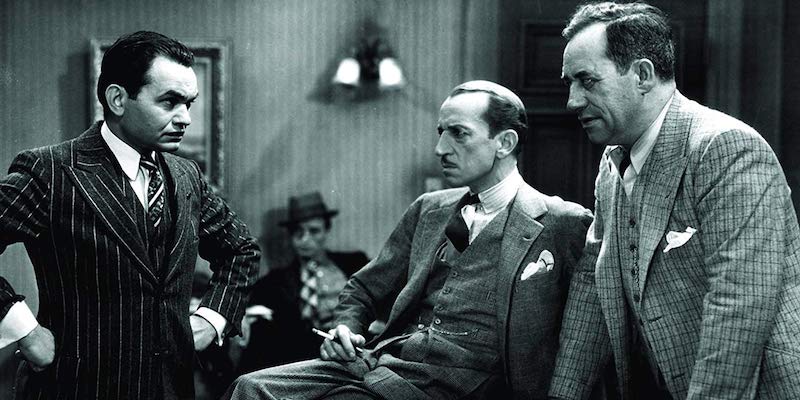 Counting Down the Greatest Crime Films of All-Time: #44

Clark Gable was supposed to be in this movie. Rumor and revisionist memory are at odds, but it seems that director Mervyn LeRoy spotted Gable in the Los Angeles production of a stage play, The Last Mile, and decided he would make a perfect Joe Massara, going so far as to sign Gable to a $500 contract. But when Darryl F. Zanuck, head of the production for the film, saw him he immediately got rid of him, outraged that LeRoy had considered such a homely actor for the part. His ears, he claimed, looked like wind socks. In Jack Warner’s biography he claimed that he wanted Gable to play the role of Rico. 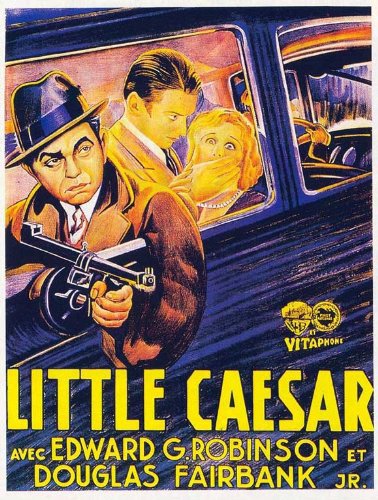 Enrico Cesare Bandello, known as Rico, leaves his small town with his friend Joe Massara to make his fortune in Chicago. Joe wants only to be a dancer, but Rico, captivated by the notion of the fame and wealth of the mobster Diamond Pete Montana, wants to be a gangster and joins Sam Vittori’s gang, one of the two most powerful in town. Joe gets a job dancing in a nightclub owned by Little Arnie Lorch, head of the other Chicago gang. During the fabulous New Year’s Eve celebration at Lorch’s club that Joe sets up, Rico commits a robbery. Using the daring heist as a stepping stone, Rico takes over the mob from Vittori, and when Lorch tries to kill him and fails, Rico forces him out as well. Joe, at the urging of his girlfriend and dance partner, Olga, wants to get out of the mob and confronts Rico, who threatens to kill Olga if Joe leaves. Fearful for his own life and Olga’s, Joe decides to turn state’s evidence against Rico. Rico learns of the plan, and sets out to kill Joe but can’t pull the trigger on his old friend. When Rico is forced into hiding, Sergeant Flaherty tries to get him to show himself by telling the newspapers that the little gangster is a coward. Rico belligerently calls the police, the call is traced to his hideout, and the police come en masse and shoot him dead.

While there had been a few gangster movies before Little Caesar, this thinly disguised portrait of Al Capone is conceded to have been the impetus for the flood of similar gangster epics that flourished in the early 1930s. This uniquely American movie genre had a short life, however, because the end of Prohibition changed America, essentially breaking the power of the mobs, whose major income source had been bootleg alcohol.

Edward G. Robinson made it clear that he wanted the role of Rico Bandello. He had the advantage of looking somewhat like Al Capone but was not regarded as a big enough star for what was to be a major production. He was offered the role of Otero but went to a meeting with producer Hal B. Wallis in full gangster regalia: dark suit and tie, spats, homburg hat, and a big stogie stuffed in his mouth. He got the part, and the gentle, bookish art collector was typecast as a tough gangster for most of his career.

Robinson’s major problem with acting wasn’t the snarl or the trend-making elocution. His problem was that he blinked every time he fired his gun, which wasn’t what tough guys were supposed to do. Unable to stop the actor from shutting his eyes, after several takes director Mervyn LeRoy had Robinson’s eyelids taped open for scenes in which he had to fire a gun.

Bandello, in a hail of bullets, is shocked to be hit. Clutching himself, he asks, “Mother of Mercy, is this the end of Rico?” 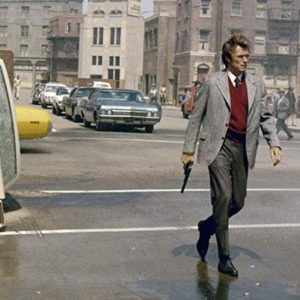