Crime and the City: Melbourne, Venerable Town of Vice

Life on the Sunny Side of Noir

It’s fitting we visit Melbourne early in our journey around the world’s crime cities. The founding of Melbourne is intricately linked with Australia’s origins as a British penal colony of course, but also it was home to Fergus Hume, the most successful crime writer of the 19th century you’ve probably never heard of. To put it mildly, Hume is not as celebrated, even in Melbourne, as his contemporaries Arthur Conan Doyle or Wilkie Collins, but he outsold them both with his murder story The Mystery of a Handsome Cab (1886) a full year before Conan Doyle published his first Holmes story. It’s a shame the novel is not better remembered, as it is both a highly readable and clever mystery, as well as a fascinating description of the minutiae of life in Victorian Melbourne. Hume wanted to write a book, “containing a mystery, a murder, and a description of low life in Melbourne.” He did pay tribute to the works of the French mystery writer Emile Gaboriau and his earlier Monsieur Lecoq novels, but many would argue that Hume’s plotting is tighter than his French counterpart and his mystery a tougher one to solve.

The handsome cab (a horse-drawn carriage for two passengers with the driver seated at the rear with the reins running over the carriage roof) was an ideal site for a murder, as the crime could not be witnessed by anyone outside the carriage. A person is alive when the cabbie picks up his fare and discovered dead when they reach the destination. But it’s the descriptions of a rapidly developing Melbourne that remain fascinating. Hume flits between the fancy “blocks” of Collins Street, flush with smart shops and houses built on the profits of the 1850s gold rush in Victoria State, and dubbed “Little Paris,” and then the slums of Chinatown just around the corner then, as now (though no longer slums), along Little Bourke Street.

Jumping ahead 70 years to the 1920s you could easily meet Miss Phryne Fisher shopping for flapper fashions on Collins Street. Melburnian Kerry Greenwood has now written more than 20 Phryne Fisher novels and their popularity has been boosted by the global success of the Australian Broadcasting Corporation’s (ABC) adaptations of them in the long-running Miss Fisher’s Murder Mysteries series. Phryne is a super-glamorous private detective in 1920s Melbourne—she’s wealthy, stylish, independent and lives in the beautifully art-deco Melbourne seaside district of St. Kilda. She flies planes, drives fast cars, has a Chinese lover, mixes with high society as well as the local crims, and shocks Melbourne by occasionally wearing trousers. You could do no better than to start at the beginning with the first book in the series, Cocaine Blues (1989), featuring well-off colonial society girls, back street abortionists, communist cab drivers and a Russian ballerina with a grudge against drug dealers.

But don’t think there’s a shortage of good crime writing dealing with contemporary Melbourne. There’s plenty. Garry Disher is one of the Godfathers of Australian crime writing who’s won just about every award there is to win in Australia several times over including the prestigious Ned Kelly Award for crime writing twice (an award named after Australia’s best known bushranger and criminal folk hero). His seven-book Hal Challis series is set in Mornington Peninsula, a town just southeast of Melbourne of about 200,000 people. Disher himself has lived in the town for 25 years and seen it grow due to the population overspill from Melbourne. It’s become home to some of Australia’s richest families looking for beachside getaways while still having pockets of stubborn poverty and social depravation hidden away from holidaymakers’ eyes.

The dichotomy of the two extremes is the world D.I. Hal Challis inhabits. In his world are kidnappings that could ruin the tourist season, methamphetamine dealers moving in, a serial rapist preying on local women and all manner of trouble when the holidays come and Mornington Peninsula becomes a major destination for post-exam “schoolies” on alcohol and drug-fueled trips similar to America’s Spring Break. Disher’s Mornington Peninsula reflects many of the problems for small town residents across Australia—including drugs, persistent unemployment and poverty along with gangs and racial tension for some, while others accrue great wealth and move to mansions by the sea.

Having won nearly as many awards as Disher is Peter Temple who has penned plenty of crime books but remains best known for his quartet of Jack Irish novels. Jack Irish: one-time criminal lawyer, compulsive gambler and, thanks to this addiction, heavily in debt, is a private eye for hire. He also likes a drink (shocker). Jack is pure Melbourne working-class and the novels are great Aussie Noir. The ABC brought actor Guy Pierce back from Hollywood to play Jack on TV with a few days growth, whisky breath and a permanent hangover. The books and the TV series are set in the tight-knit Melbourne working class suburbs of Fitzroy and Collingwood, which have seen some gentrification of late, but still retain their old working-class roots while being a new home to more recent migrants to Australia.

True crime has long been a strong selling genre in Australia, and Melbourne writers haven’t shied away from the city’s recent criminal ructions of police corruption scandals, feuding drug gangs and marauding “Bikie” gangs. But it’s TV where true crime has really shone. The Underbelly series, produced by Australia’s Nine Network, has been phenomenally popular and can stand with any long-form crime TV show anywhere. The first series in 2008 dealt with the spate of Melbourne gangland killings in the decade between 1995 and 2005 that saw 36 criminals and their associates killed and Western Melbourne small-time hood Carl Williams ascend on the back of their murders to become the city’s drug kingpin. The second installment, Underbelly: A Tale of Two Cities (2009), detailed the criminal links between Melbourne and Sydney. Underbelly brilliantly depicts the various gangs of Melbourne such as the mostly ethnically-Irish Painters and Dockers, the Italian Honoured Society, the Russian-led Radev Gang and the largely ethnically-Italian Carlton Crew from the tough working class Melbourne suburb of the same name that’s home to the city’s “Little Italy.”

Underbelly has been so popular that Nine Network has jumped backwards in time looking for great stories to tell. Not all are centered on Melbourne (Sydney is certainly a future Crime City too!) though Underbelly: Squizzy (2013) told the story of the life and career of the notorious Melbourne pickpocket-turned-mobster “Squizzy” Taylor from the hardscrabble south-east suburb of Richmond. From the early 1900s to his death in a gunfight in Carlton in 1927, Squizzy was involved in just about every Australian crime you can think of—starting out as a cut-purse then moving on to sly-grog selling, running two-up schools, a standover man, leading his boys in razor gang battles, illegal bookmaking and being a general larrikin. If none of that means anything to you then it’s time to start reading some Melbourne true crime to familiarize yourself with some Aussie criminal slang. [I have some Underbelly to watch too. –Ed. Note]

Melbourne-set crime fiction has continued to be impressive. Just to name-check a few recent titles:

– Jasper Wolf‘s debut crime fiction novel Hunted (2015) has a serial killer targeting policewomen. The story is told from two viewpoints—one following the investigation and one inside the mind of the murderer with a chilling sense of calm and concentration.

– Shane Maloney’s Murray Whelan series (from 1994 to 2007) takes a wry sideswipe at local Melbourne politics—these are well-crafted and humorous crime novels set amongst the Labor Party, the unions and the Victoria State Government. Murray solves a series of crimes that somehow always come back to shady deals, crooked politicians and fraudulent local businessmen across the city.

– Cairo (2013) is an art heist novel from Chris Womersley, an author better known in Australia as a literary rather than a crime writer. Still it’s a wonderful story, brilliantly evoking the Bohemian artistic community that gathered in Fitzroy to escape the “vulgar 1980s.” The Cairo apartment building is a still-standing Melbourne architectural icon and the crime Womersley speculates his way around, the 1986 theft of Picasso’s Weeping Woman, a true heist. Picasso painted several Weeping Women in the 1930s—the final and most intricate one is in London’s Tate Gallery. A group calling themselves the “Australian Cultural Terrorists” stole an earlier version of the painting from Melbourne’s National Gallery of Victoria in 1986. It was later discovered, well cared for, in a locker at the city’s Spencer Street Railway Station. The thieves’ demands included an increase to arts funding. Just who the thieves were has never been discovered.

Melbourne and its surrounding districts continue to be fertile ground for crime writers, if not always for crops. The descriptions of drought-plagued Kiewarra in Jane Harper’s debut novel The Dry (2016) will leave you feeling thirsty and your throat parched. Australian critics have been unanimous in their praise for The Dry in which Melbourne cop Aaron Falk reluctantly returns to Kiewarra, the remote Australian farming community, outside the city he left as a teenager. He’s back to attend the funeral of former best friend Luke Hadler. The sun parched town is dying; its community bitter and suspicious with old feuds simmering ready to explode. Harper’s writing is pared back to the bone, the characters say a lot in a few words. There are seamless flashbacks to past events but the suspense remains tense right to the end.

One hundred and thirty years ago Fergus Hume launched Melbourne as a crime city with his Handsome Cab Mystery that dissected the social divisions and petty jealousies of the fast-growing boomtown. In The Dry Harper dissects one small community on the periphery of the city with an equally incisive eye. There is no reason to expect that Melbourne won’t continue to produce yet more great crime writing in the years to come. 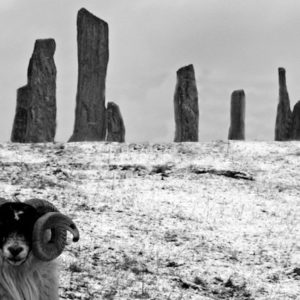 For writer Malcolm Mackay—chronicler of a fictional network of gangsters in a darkly atmospheric Glasgow—life on a small...
© LitHub
Back to top