The following is an exclusive excerpt from The Whisperer, the latest thriller from Karin Fossum, "the Norwegian Queen of Crime." Ragna Riegel is an introverted single-mother simply trying to make it day-to-day when she receives an anonymous letter telling her that she is going to die. Dismissing it at first, but growing more fearful as others arrive, Ragna begins to hunt for this hidden threat as her life crumbles around her, in this story of torment, isolation, and survival.

She never turned the lights off when she left home. The house would be there, bright and welcoming, when she got back from work, especially now in the autumn, when it was dark. It was a modest house, single-story, with a kitchen, sitting room, two bedrooms, and a bathroom. There was a washing machine in the cellar, and storage space for all the bits and pieces that had accumulated over the years. Her own things and things she had inherited from her parents. The cellar was cold and raw. When it rained a lot, the damp patches on the cellar floor grew larger. She had always lived in this house, even after her son was born—she did not have any money when she got pregnant and needed help. So they became a family of four. There was a small garden in front of the house, which she pretty much left to its own devices, as gardening was not one of her talents. She also had a neat veranda, where she seldom sat, as she found it uncomfortable that people could see her from the road. And with her pale skin and faded red hair, she could not take the sun. She kept the trashcans down by the road, next to a mailbox on a stand, and was particularly grateful for the street lamp by the end of her drive. The driveway was well lit. When she walked up from the bus stop, she liked to think that it had been put there especially for her, so she could find her way home. Playing was allowed, Ragna Riegel thought. Children are allowed to play all the time.

No address. No stamp. No sender. She stood under the street lamp and turned the envelope back and forth.

She had crossed the road. She had the bag in her left hand, and with the right she opened the mailbox. Took out the local paper and church weekly, a brochure advertising furniture, and a very ordinary envelope. It was not often she got letters. Her surname was on the front of the envelope: RIEGEL. Written in capital letters. She put her bag down on the ground. No address. No stamp. No sender. She stood under the street lamp and turned the envelope back and forth. The paper was coarse, maybe recycled — it was thinner and grayer than normal paper. Goodness. A letter with no sender. Maybe it was from Olaf next door who had something on his mind, or the Teigens on the other side of the road. Or maybe it was just another advertisement, something that had been dropped in every mailbox in Kirkelina, the street that ran from the spinning factory to the church. Immigrants sometimes offered their services that way. They washed and painted and did carpentry, tidied and repaired, and she thought that perhaps she should contact one of them about the fence. It needed painting. Or it might be something that the council had sent out to all households. But, obviously, it was not, because her name had been handwritten. She walked up the gravel drive to the house, let herself in, and put the post down on the kitchen table. She dropped her bag on the floor and kicked off her shoes. Once she had emptied the bag from Irfan’s, she decided to make some risotto. She could use the two sausages she had in the fridge, unless they were past the sell-by date. Which they were not. She sank down onto a chair by the table and stared at the envelope. She turned it over several times, as though she expected something to suddenly appear on the back, a company name or logo, if she just waited long enough. But nothing happened. So she opened it and pulled out a folded sheet of paper, with a short message.

YOU ARE GOING TO DIE.

Bewildered, she stood with the note in her hand. She had jumped up in fright. Her heart was thumping. Instinctively she stared at the window as though someone would appear outside, someone who could explain what had happened. But there was nothing out there, just darkness, and some lights in the Teigens’ windows. And a slight movement when she edged closer, a pale, ghostlike face that was her own reflection in the glass. Again she turned the envelope over and studied the back, but no sender’s name or address had appeared in the past few seconds.

“Goodness,” she whispered, and shook her head. “You are going to die.” It was written in capital letters, the way a child would write, a smart child. The letters were clear, even, and all the same height. We all will, she thought. She chose just to shrug it off and sniffed in the way her father used to whenever he felt disdain for someone, which she certainly did now. Her thoughts ran along Kirkelina. She did not know everyone who lived there, only those closest. But many of them were her age, or older. The houses were old, built in the thirties and forties, and many of the inhabitants were alone. No families with young children. No willful toddlers or rebellious teenagers that she knew of. But there were grandchildren, she realized. Olaf and Grethe next door had four, who often came to visit. He had put up a trampoline in the garden— she could see it from the veranda. She heard the shouting and laughter in summer. She saw the little bodies bouncing up and down, up and down inside the mesh safety netting. But she knew Olaf and Grethe; they were good people. She did not think they would have grandchildren who would even dream of sending threats to anyone. If whoever it was who had sent the letter even was a child, who went from house to house on bike or by foot. There was something alluring about the autumn dark. All the things you could do without being seen. Creep from house to house, steal through garden after garden. With rubber soles, black clothes, and hood up. But was half the fun of playing tricks not seeing the effect of your mean streak? No one could see her now, as she stood here in the kitchen reading those five words. And no one would see her if she put her head in her hands in despair or ripped the letter to pieces in a rage and threw it in the fire, or cursed and swore. So, it was a prank that would have no consequences, other than that some nasty person had felt a thrill when he dropped the envelope in her mailbox and then snuck off. Ah well, Ragna thought. Some people have small pleasures. She did glance over to the window again, though, where the dark loomed like a wall. It struck her that the days when teenagers roamed the streets causing trouble were long gone. They sat in their rooms now, playing computer games; they bullied each other on the Internet. None of them would even look in her direction, or be interested in her weaknesses, her universe. No one knew her greatest fear. The whole time, she stood with her back to the envelope. But she could feel it through her clothes, like a sting; it would not leave her alone. It lay there screaming. She was simply a lonely woman who never showed herself. She would make some risotto now, enjoy it in peace and quiet, and then sit down to read the newspaper. No doubt there would be something about the local troublemakers and hopeless youth. After all, it was autumn. Yes, she thought, changing her mind, they would be roaming the streets. And they would be intoxicated as well, because she guessed there was a gang of them, boys no doubt, probably in their early teens. Or they could be much younger. She remembered some poisonous girls of around eight or nine from her own childhood. She folded the paper and put it back in the envelope, sniffed again to demonstrate her disdain. Boiled the water, diced the sausages, chopped the onion and tomatoes and chili. She was more generous than usual with the spices. The whole time, she stood with her back to the envelope. But she could feel it through her clothes, like a sting; it would not leave her alone. It lay there screaming. She tossed her head in an attempt to cover the anxiety. To make a show in her own quiet way. To close the door that had opened into an unknown room. The kettle hummed, quietly at first and then louder. She looked over at the table again, could not help it. The envelope was as anonymous as an envelope could be. It had stopped screaming and now whispered instead, just like she did. It demanded her attention. She had never seen anything so insignificant, and yet she felt it was a threat.

She poured Irfan’s rice into the pan with a knob of butter, turned down the heat, and put the lid half on. Then she browned the pieces of sausage in another pan, added tomato purée and everything else, the chili. A simple table setting, with a plate, glass, and cutlery, and a jug of water. But that meant she would have to move the envelope, put it somewhere else. She swore under her breath— she wanted nothing to do with it, but then opened the letter and read it one more time.

You are going to die. In other words, backwards, die to going are you. You. The person who had written the message had good motor ability. The letters were carefully written, one by one. The sender did not want the writing to have any recognizable loops or curves. Like a fingerprint. A man, of course; a woman would never make a threat like that. Oh, so it’s a man now, not a teenager, she thought. She turned the piece of paper over. The note had been written with a strong hand, and it was possible to see the letters through the paper. What if it had said RAGNA on the envelope, rather than RIEGEL? Or both names. Or if it had said KIRKELINA 7. Then she would not have been so frightened before reading what was written, but she could not explain why it should make a difference. The note was for her, without a doubt, it was in her mailbox. Her son had left home, her parents were dead. And the way the note was formulated gave the impression that she was worthless. She was just RIEGEL. And she was going to die. It was the brevity that frightened her: just the bare essentials, merciless, no doubt. I’m hungry, she thought, confused, and folded the piece of paper again. Put it back in the envelope, opened the cupboard under the sink, and pushed the letter into the trashcan. And there it lay among the old rotting food.

In Rural Noir, I Found Myself 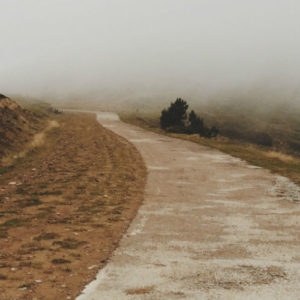 In Rural Noir, I Found Myself Growing up poor in the rural Midwest in the ’80s, I never saw my life reflected in pop culture. A staggering number of sitcoms...
© LitHub
Back to top