Dangerous Games to Play in the Dark 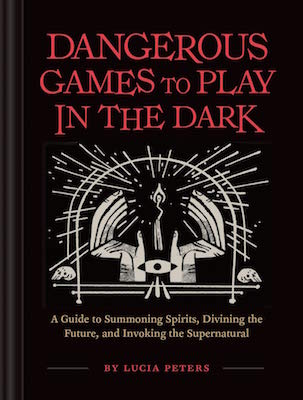 The following is an exclusive excerpt from Dangerous Games to Play in the Dark, by Lucia Peters. In this compendium, Peters assembles the scariest and riskiest supernatural games from history, around the world, and the deepest trenches of the internet, including Stiff as a Board, Light as a Feather, and The Answer Man. But be careful when you play—because some of the entities you may contact won’t always play by the rules.

Reward: Proof of your bravery

The roots of the mirror game known as Bloody Mary stretch back to a folk tradition practiced by young people in the 19th century. It was said that if you walked backward up a staircase in a darkened house at night, passing a mirror as you went, you would see reflected in the mirror one of two things: the face of the person you were destined to marry, or a skull. If the skull appeared, it meant that you were destined to die before you got the chance to marry anyone.

Bloody Mary itself, meanwhile, appears to have come along somewhat later, although exactly when is a little hazy. We do know that the legend was firmly established in the United States by the 1970s: Folklorist Janet Langlois’s essay, “Mary Whales, I Believe in You,” published in Indiana Folklore: A Reader in 1976, features several versions of the legend which Langlois had gathered throughout the early ’70s.

And as for who Bloody Mary is? Well, that changes depending on who you’re talking to. To some, she’s Mary Worth, who may have been either a Puritan woman who was tried and executed for witchcraft, or a woman who was killed in a car crash more recently. To others, she’s Mary Whales, who might be the aforementioned car crash victim or a vanishing hitchhiker-type spirit. Some say she’s the vengeful spirit of a mother who lost her child. Still others say she’s Mary Tudor, the Queen of England who reigned from 1553 to 1558 and became known as “Bloody Mary” for the executions she carried out against Protestants in an effort to restore Catholicism to England.

For what it’s worth, some have suggested a scientific explanation for the spirit’s appearance: It’s said that staring into a mirror in low-light conditions for lengthy amounts of time causes our perception of what we’re seeing to distort and become monstrous. Perhaps the true monsters are simply reflections of ourselves.

No matter what you believe, though, one thing is absolutely clear: If you try to summon Bloody Mary, you do it purely for the challenge of surviving the encounter.

Say it aloud, beginning softly, but adding volume with each repetition. Repeat it once, twice, three times—all the way up to thirteen repetitions.

Thirteen is the magic number. Speak the thirteenth repetition with finality. Then, stop.

What do you see? Is it just yourself?

Do not place yourself within arms’ reach of the mirror.

She might scream at you, but you can handle screaming.

If she’s able to grab you, though? There’s no coming back from that.

Do not use the mirror again.

A flashlight may be substituted for the candle; however, the success of the summoning may be somewhat less predictable.

Should the method described here fail to achieve the desired result, several variations may be employed in subsequent attempts:

The Femme Fatale: Subverting and Complicating a Noir Trope 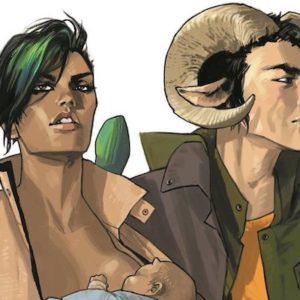 Graphic Novels and Social Justice: A Primer I’d never been to an advance screening. The closest I’d come to seeing a movie before it was officially released was the summer...
© LitHub
Back to top