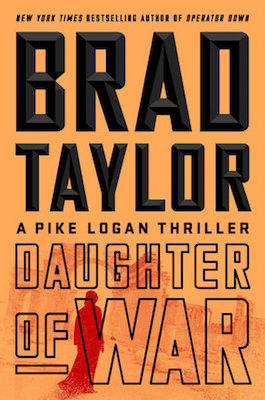 The following is an exclusive excerpt from Daughter of War, the latest high-octane thriller from internationally bestselling writer Brad Taylor. In the following passage, employees of secret United States government organization track down a pretend billionaire in Monaco, and wonder if there are more sinister forces at play in the selection of their target than usual.

The cab pulled up the circular drive and I saw a Ferrari Portofino and a Porsche 911 Cabriolet on either side of the hotel entrance. We were in a minivan, which pretty much summed up our status.

I said, “Looks like someone’s gone a little overboard on this one, but I’m not complaining.”

The cab stopped, and an unctuous bellman ripped the door open. To my left, my partner in crime, Jennifer, said, “This’ll be the first time getting pulled from an actual project will be a step up.”

Behind me, my 2IC, Knuckles, said, “Living with the Taskforce motto. Money is no object.”

We exited the van in front of the Hermitage Hotel in Monte Carlo, me suitably impressed with the cars out front, wondering who would park a Ferrari at the curb like it was a VW. It wouldn’t be until later that I learned it was all a charade, with the hotel renting the cars and rotating them daily to keep up a Hollywood image that just didn’t exist.

Monte Carlo, in the principality of Monaco, had a reputation as a rich man’s playground, and to some extent, it was deserved. Situated on the French Riviera just up the coast from Cannes and Nice, known for the Monaco Grand Prix, Princess Grace, and the famed Monte Carlo Casino, it had its fair share of celebrities sailing into the harbor on yachts that cost more than the income of most countries, but at its heart, it was just a city. With a density rivaling Hong Kong in persons living per square inch, it couldn’t possibly live up to the hype it portrayed, because, while that same density ranked as the highest number of millionaires in the world, the majority of people living and working inside its borders were not lucky enough to be anointed citizenship, and scraped a living by catering to the wealthy.

We spilled out of the cab like a clown car, and the bellman asked if he could take our luggage. I would have said hell no, because that sort of thing just aggravated me, but Veep, the youngest person on our team, beat me to the punch, saying, “Yes, that would be great. We’ll be in four separate rooms. Is that a problem?”

Monte Carlo, in the principality of Monaco, had a reputation as a rich man’s playground, and to some extent, it was deserved.

Of course the bellman said no, because it meant four separate tips for a load of luggage I could have carried myself.

We entered the opulent lobby, full of marble columns and impeccable granite floors, and Veep said, “I never stayed at a hotel like this on spring break.”

I scoffed and said, “Oh, bullshit. The president’s son never stayed at a place like this? You seemed to know your way around outside with the bellman.”

Nicholas Hannister had earned his callsign, Veep, when his father had been the vice president of the United States. Now his father was the most powerful man in the world, and I was still trying to get the son to forget his heritage and just become a member of the team. Four months ago, he would have shut up and taken the jab, afraid to say anything. Now he gave it back, which I considered a little bit of a breakthrough.

“I said on spring break. You know, when you get a break from college and have to pay your way to get the babes? Oh, wait. I forgot. You never went to college. But surely you’ve seen YouTube videos.”

That would have been an incredible insult from any other man, but from my team, it meant nothing. I was Good Will Hunting and they all knew it. Especially in our chosen profession.

I saw Jennifer flash her eyes in anger, not liking what he’d said,  actually taking offense at what was meant for me. She’d earned her college degree the hard way, six years after initially dropping out to marry an abusive husband, and had learned that a piece of paper didn’t equal intelligence.

She blurted out, “He has a degree. He worked hard—” and I grabbed her hand, shutting her up. Yeah, I had a degree, but he was right. I’d never been a full– time student. But that was irrelevant, and Veep knew it, not the least because the first time we’d met was behind the barrel of a gun when I’d saved his life.

Jennifer relaxed, and Veep smiled, understanding the subliminal jab. I had the babe.

We walked to the reception desk, and the final man on our team, Brett Thorpe, said, “No offense, Koko, but this beats the hell out of that hotel in Eze.”

Jennifer ignored the use of her callsign, which she despised, instead looking around the lobby in a mock study. She arched an eyebrow and said, “Yeah, but there’s no church here to work on,” then saw an advertisement on a wall and grinned, saying, “But there is a spa. And like Knuckles said, money is no object to the Taskforce.”

In reality, it was an elaborate cover organization used by the United States government to facilitate penetration of denied areas to put some threat into the ground.

Jennifer and I were partners in a company called Grolier Recovery Services, which ostensibly facilitated archaeological work around the world. In reality, it was an elaborate cover organization used by the United States government to facilitate penetration of denied areas to put some threat into the ground. Knuckles, Veep, and Brett were all members of special operations or the CIA, but were acting as “employees” of the company, and as such, every once in a while, instead of getting into gunfights, we had to actually do some archaeological work.

With a degree in anthropology, and a true love for history, Jennifer really enjoyed these trips, but I always found them exceedingly boring. Even so, I understood why we did them. If you wanted to portray a real company, you had to have more than a web page. You had to have a history of doing what you professed you did, to include a network of contacts in that business world and a track record of success. Especially when trying to get through customs in a country that was less than hospitable to the United States.

And it didn’t hurt to keep Jennifer happy. That kept me happy.

We’d been in the French town of Eze, a medieval village just outside of Monaco that had changed little since the Crusades. Well, the buildings hadn’t changed, but the proprietors certainly had. Pedestrian only, built on a mountain with narrow stairwells that tested the hearts of the elderly tourists, Eze looked exactly like it had seven hundred years ago, except now it was full of art galleries and perfume shops.

Near the top of the mountain village was a church that was being renovated with the help of an American university. Called the Notre Dame de l’Assomption, it was younger than the surrounding area—having been built in the eighteenth century—and during the renovations, the university had found a graveyard. A much, much older graveyard than the church. Since the village had bounced between Italian and French provenance, a three–way fight had ensued as to who would get to excavate the find, with both France and Italy claiming the bodies, and the university claiming the discovery.

We had been contracted by the university to help with the dispute, as such things were a Grolier specialty. It would have been easy work, too, giving Jennifer a chance to really enjoy some old bones, but we’d only been in‑country for four days when our commander, Kurt Hale, had called, telling me to get the team to Monte Carlo for a situation that had to be resolved right now.

With the United States government, everything was a damn crisis. We never seemed to be able to see past our own headlights, constantly surprised when something happened that had been brewing for years. This crisis was a little bit unique, though, because Kurt had brought in two different teams to deal with it—something that rarely happened.

Brett said, “Am I supposed to pay for my room, or is this taken care of?”

We walked as a group to the check‑in desk, all of us taking in the marble surroundings and feeling a little underdressed. The reservations were under my company name, because there was no way that we could reserve a room as “Top Secret Commando Unit,” even if the funds were coming from the Taskforce through multiple cutouts.

In short order, we went to our separate rooms, where I immediately hooked my laptop to a VPN to see exactly what the state of play was.

Jennifer moved her things around, getting settled, while I checked messages. I could tell she was a little antsy, but I assumed it was because of being pulled from our contract. I was wrong.

I closed the laptop and said, “Nothing new. Only handle we have on the guy is his reservation tonight at the restaurant, and then at the casino.”

Article continues after advertisement
“Why two teams? If it’s just a simple Alpha mission? Something more is in play, and we’re being kept in the dark.”

Jennifer came out of the bathroom and said, “That’s it?”

I said, “Yep, but it can’t be that hard. How many Koreans do you think are running around here? He’ll stick out like Brett.”

Brett was African American, another small population here in Monaco.

She said, “I’d like a little more than a name and nationality to go on. The target isn’t a member of an FTO group, and why two teams? If it’s just a simple Alpha mission? Something more is in play, and we’re being kept in the dark.”

While I didn’t believe Kurt Hale would keep something from me, she did have a point. It was true our mission was only Alpha, but we’d already been given authority for Omega if we thought the guy was dirty, meaning it was my choice. My decision. Like the fact that two separate teams were operating in Monaco with two separate covers, it was unusual. As was the target.

The charter for the Taskforce was limited to designated substate groups on the State Department’s Foreign Terrorist Organizations list, something that was updated continually. The Taskforce was a scalpel against such assholes, but our boundaries ended with them. We didn’t do state organizations, even if they sponsored such groups. The United States had plenty of others who did that, like the CIA and the intelligence organs of the Department of Defense.

Which begged the question of why we were chasing a North Korean pretending to be a billionaire South Korean on the shores of the Côte d’Azur.

From DAUGHTER OF WAR by Brad Taylor, to be published on January 8th by Dutton, an imprint of Penguin Publishing Group, a division of  Penguin Random House LLC. Copyright © 2019 by Brad Taylor. 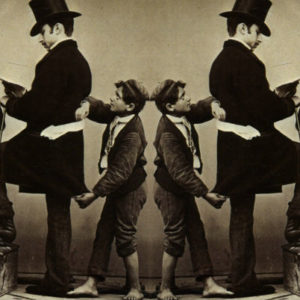 David Maurer, the Dean of Criminal Language Ten years after its publication in 1940, the literary critic Edmund Wilson sent his then-friend and future enemy Vladimir...
© LitHub
Back to top