David Mark on the Clarity of Good vs. Evil in Crime Fiction

The Author of the Aector McAvoy Series Heads to NYC

David Mark’s many years as a crime reporter in the UK’s historic port city of Hull have provided him with darkly tinted lenses with which to peer through as a crime novelist. Luckily, his Hull-based fictional detective Aector McAvoy, a gentle-giant transplant from the highlands of Scotland who’s been on the police-procedural scene since 2012’s The Dark Winter, refuses to surrender to the malign forces that cast long, grisly shadows over his adopted home. The unconditional love and respect of two good women, McAvoy’s wife, Roisin, and his boss, Trish Pharoah, allow him to tangle with some of the most horrific elements of humanity without losing his mind—though there are times when he has to be dragged back from the brink. In the sixth McAvoy novel, Cruel Mercy, out this month from Blue Rider Press, McAvoy finds himself far from home, as he investigates a couple of cases in New York City. But the connections he maintains with both Roisin and Trish are palpable and the noirish atmosphere of Hull, always so tantalizingly executed by Mark with fresh immediacy, follows him decisively to the Big Apple.

Mark’s riveting series offers an exciting double-dose of sinister-thriller-pleasure: each of Mark’s books, including Original Skin, Sorrow Bound, Taking Pity and Dead Pretty—the last of which is set to be published in the US in February 2018—feature plots twisty, twisted and twinly-structured: each novel functions as tension-filled, standalone crime novel, but each one is also part of a larger narrative arc—Mark had no less than 12 novels in mind from the get-go—that pit McAvoy and his colleagues relentlessly against a breathtakingly nasty network of nail-gun wielding baddies known as the Headhunters.

“I do love them, I’m pleased I invented them,” says Mark, who seems to have a particular affinity with his criminals, not lionizing them, but deftly ensuring that they live and breathe quite chillingly beyond two-dimensional villain stereotypes. And he’s equally good at exposing the razor-thin edges of those moments when a police officer might succumb to one seduction or another and cross over to the dark side. “Baddies are so interesting,” he continues. “I think we are all baddies, really—it’s just that some people are hamstrung by the terror of allowing themselves to be who they really are. Nobody could possibly say that everybody who committed atrocities in Germany during the war was bad; they weren’t all evil, they were just human beings. So I think of the Headhunters largely as being pragmatists with perhaps a little bit of soul removed. But I know people who are very good people who work in charity shops as volunteers and I still think that there’s a darkness to them, that they could still behave in a terrible way. I’m a terrible cynic about human nature; I really believe that we’d all be terrible as long as you’d take the restraints off.”

Some of that willingness to embrace his characters’ dark deeds did grow out of his time on the crime beat. “I think I’ve always been a bit cynical about my fellow human beings,” Mark notes, “but, yeah, certainly the amount of time I’ve spent in court covering cases completely opened my eyes to how people actually are. I mean, there’s nobody I ever saw in the hundreds of cases I covered who I thought to myself, ‘Yes, they are what I think of as a murderer.’ They were all invariably a jealous person or somebody who hadn’t controlled their temper or somebody who had seen something they wanted and there was an obstacle in their way. Really, you could do a very good David Attenborough documentary on human beings—we’re not as civilized as we think we are. We might love our toys and we might all have comfortable shoes, but I still believe that in the heat of battle, or in the heat of whatever moment it might be, you never quite know who you really are and how you might behave. It always makes me laugh when people tell me, ‘Oh yeah, she’s a good person.’ Well, quantify that.”

Cruel Mercy may find McAvoy at a temporary remove from the Headhunters, but New York City readily reveals its own dark depths. McAvoy, on a hunt to track down his errant brother-in-law, also assists New York’s Finest with a case of two boxers visiting from Ireland who’ve been retrieved from the woods of rural New York, one dead, one in a coma. The multi-stranded plotline, told from several viewpoints including that of Coma Man, takes in dastardly deeds of various mafia on the Eastern seaboard, underground fight clubs, serial killers and seriously out-of-whack priests and lawyers—not to mention longstanding Irish family feuds. In the meantime, Mark has time to have a bit of fun with police nicknames (“The Seventh is full of police officers with handles like Boner, Stinkz, and Ball Sack. To Alto, Ball Sack seems particularly unfair. After all, her mother named her Deborah”), and introducing a whole new raft of colleagues acclimatizing themselves to McAvoy’s height, character and Scots’ burr: one character compares him to both Sean Connery and Shrek; another one, witnessing McAvoy blush, “realizes he’s dealing with a man whose shyness could well be a fatal affliction.” There’s also a canny bar-set scenario of McAvoy and his NYC counterpart getting to know each other by mulling over their shared case and feeling each other out with lovely cautious optimism.

McAvoy is painfully aware of his size—at six foot five he tends to tower over others—and strength, and maintains a general reluctance to use them forcefully. (Still, alert him to a damsel in distress and he’s a whirling dervish of a superhero, brandishing multiple blazing swords). McAvoy’s demeanor—Mark has described his protagonist as “the epitome of bewildered decency”—stands in marked contrast to the grim crimes and flesh-crawling gore generated by his nemeses: in a Mark book, people tend not to just get shot, they also get their noses cut off. His bad guys are, pretty invariably, the worst of the worst, with a few anomalies like the mafia hitman in Cruel Mercy, for example, who “takes no pleasure in it but it is his life’s work to stop human hearts.”

“We live in such a secular age,” says Mark. “We have so few unequivocal examples of good and bad. That’s why we’re still making films about the Second World War. There’s no gray area there: we know what the motivations were on either side and we know that there’s a goodness or a badness—you picked a side. In life in the 21st century, we don’t have that. We don’t know how to behave, and men especially haven’t half a clue how to behave—you behave in a way that will please one section of society and it offends another. Someone like McAvoy, he wants to make the world a nicer place, he wants people to get on, he doesn’t understand why people feel the urge to say mean things or to comment on a newspaper article with something vile—all of that leaves him bewildered—and I understand that because that’s how I feel. The difference between us is that I’m a lot more like ‘Well, that’s just people, innit? People are crap.’ But Aector doesn’t think that: he thinks that everybody is misguided and that everybody probably just needs a hug or a shoulder to cry on and everything will be okay. Basically, it’s like every unpleasant moment in life is an aberration in Aector’s eyes and he wants to get through to the other side. But for him to be a believable character, that’s had to evolve slightly. He’s caught a few serial killers now, he’s got the scars to show for it, he’s been deprived of his family on several occasions and he’s starting to wonder whether or not things are actually the way he sees them.”

And that is precisely where McAvoy’s wife, Roisin, comes in. “Oh, he’s blessed with Roisin,” affirms Mark. “She’s a creature of light. She can hold his heart in both hands and breathe on it as if it were a dead bird and make it comes back to life. That’s a kind of blessing that some people are fortunate enough to have: I’ve been in relationships where that isn’t the case, and it just drags you through the cracks in the pavement. If you’re lucky enough to find somebody who elevates you, you can survive and you can live your life almost for them. Aector has definitely outsourced his soul to somebody who can look after it better than he can.”

Setting Cruel Mercy in the States meant a change of scenery for both McAvoy and his creator, says Mark, who successfully pitched the idea to his publishers. But McAvoy remains a perpetual fish-out-of-water in Hull, so dropping him into a new city was exciting rather than daunting for Mark.

“It was just nice to have new settings and new writing challenges, really,” he explains. “I do write in quite a filmic kind of way because as far as I’m concerned the whole of my writing process is helping the reader see the movie that’s playing in my head. And I’m certainly not tired of Hull—it’s nothing like that. But with a new location—and it could have been anywhere—the joy of finding new descriptions for new landscapes and new rooms and just for new ways of talking was freeing. I have kind of an ear for language and I like the nuance of language, so I really enjoyed it to be honest. Don’t get me wrong, the book I’ve just finished, half of it is set in Hull, and it was nice to be home. But I do think that henceforth the books will have something of a larger geographical scope. Peter James is the model for a lot of crime writers,” adds Mark, who also admires a wealth of other fellow UK-based crime scribes including Stav Sherez, Val McDermid, Steve Cavanagh, Danielle Ramsay, Mari Hannah and Susi Holliday. “Peter’s books have got bigger and the locations have got more exotic all the time: they’re still pretty much Brighton books, but you can have a Brighton book and take the reader on holiday for a few chapters here and there. I think,” adds the adventurous author, “my books will probably have more of a global feel going forward from now on.” 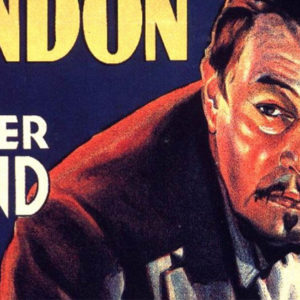 The “East Asian detective” or "Oriental sleuth” was a hugely popular character in the Western mystery literature of the early...
© LitHub
Back to top