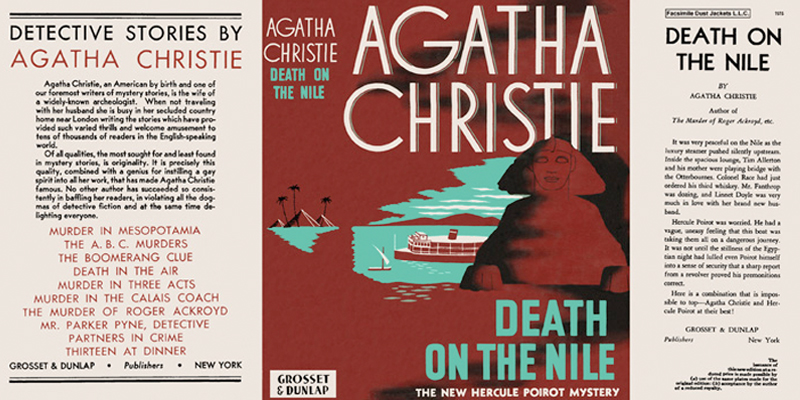 Stopping for a moment to appreciate the text of a frequently adapted novel.

Kenneth Branagh’s film adaptation of Agatha Christie’s Death on the Nile comes out today. The film will likely be criticized (what Christie adaptation isn’t, among us die-hard fans?) for deviating from the book (in no universe is Poirot’s mustache meant to look like that). While I don’t personally believe that a Christie adaptation must be strictly faithful in order to be good, I hope the film’s release will lead people to read the source text, because Death on the Nile is one of her best detective novels. It has a diabolical, ingenious murder, but it is also one of her most heartfelt and emotional books. It is one of Christie’s keenest investigations of psychology and morality, with complex characters and particularly fine prose and deft humor–aspects of Christie’s writing that are often undervalued. It is the Christie novel that shocked and moved me the most when I first read it as a teenager, and one I return to frequently.

Death on the Nile is one of the many novels in which Christie’s famed detective Hercule Poirot attempts to take a (lavishly described) luxury vacation, only to be conscripted into solving multiple murders. Linnet Ridgeway is a shrewd, proud and exceptionally wealthy heiress who shocks the tabloids by marrying Simon Doyle, the fiancé of her impoverished (and extremely intense) best friend Jacqueline de Bellefort. Jackie decides to wreak her revenge by following the couple on their honeymoon trip. She confides to Poirot that she fantasizes killing Linnet while brandishing her pearl-handled .22. Meanwhile, Poirot gradually discovers that basically every passenger has a motive to dispose of Linnet. When the heiress is indeed killed with said pistol, it turns out that Jackie has a perfect alibi. (As it happens, she was under sedation after having shot Simon in the leg in a fit of anger.) Poirot solves a case full of uncooperative witnesses and a pile of clues that don’t make sense, but not before tragedy strikes again.

The book deviates from the standard structure of a Poirot novel, where we begin at the scene of the crime and meet the main players from Poirot’s perspective. Instead, Death on the Nile begins further back in time, and we meet the characters in their own habitat, and get to know their psychological depths. This makes for keenly drawn portraits of the women caught in the terrible love triangle.

Christie’s murder victims are often profoundly unpleasant people, and one-dimensionally so: pompous colonels and stingy matriarchs.  Linnet is more fully developed and hard to pin down. She is “tall” and “golden,” both “charming” and “autocratic.” Because of her immense wealth and beauty, she has “always been able to arrange things to her own satisfaction.” Linnet is certainly no angel; she does the very immoral thing of making a play for her friend’s fiancé, and she can be callous when exerting her privilege. Yet she is not without heart, and is generous to her less fortunate friends. Poirot makes the perceptive point that Linnet is so bothered by Jackie’s constant reminder of her betrayal because she is normally kind and is not used to feeling guilty. Christie also sympathetically notes the downsides of being a tabloid queen: a woman who is always looked at, picked apart and gossiped about by people who don’t know her.

Christie’s development of the passionate and vulnerable Jackie (“eager, soft” and “particularly alive” ) is even more fascinating. “She cares too much, that little one,” Poirot notes, “it is not safe.” The betrayal of her best friend wrecks her and sparks a terrifying war between her heart and her head. Her stalking of Linnet and Simon is perversely admirable in its total brazenness, and it provides an undeniable vicarious thrill for anyone who’s been done dirty in love. But Jackie herself knows that this twisted course of action is taking a terrible toll on her. She may take “a queer suffering dark triumph” in what she’s doing, but it’s warping her soul—she admits there are times where she “almost enjoys it.” Yet however much she wavers, Jackie remains compellingly fatalistic: she’s chosen her path, and she will follow it to the end. It’s a complex and haunting portrait of a woman who loves too much: passionate, misguided and yet deeply, darkly honorable. Christie rejected feminism later in her life, but she is a very astute observer of how women are hemmed in and spurred on by societal constraints. In her depictions of Linnet and Jackie, she reveals much about the roles women have to play and how this inspires the wounds they inflict on one another.

One of the charming recurring subplots in Christie’s novels is when her famed detective goes into “Papa Poirot” mode, and becomes a sympathetic listener and counselor to troubled young women. “Papa Poirot” is out in full force in Death on the Nile, when he advises Linnet, Jackie, and the other young women on the boat. But here Papa Poirot is less avuncular and more penetrating in his observations and advice, and Poirot’s strong sense of morality is at its most fiery. When Linnet asks Poirot for help in getting rid of Jackie, he refuses, and cuts to the quick of Linnet’s sins. “You had everything madame, that life can offer,” he tells her forcefully. “Your friend’s life was bound up in one person.” He insists that she deliberately attempted to dazzle Simon and take him from Jackie. “There was a moment when you hesitated,” he tells her, but “you did not hold your hand.” He is gentler, but equally frank with Jackie when he tells her to “bury her dead” and quit the stalking. He speaks, as Poirot often does, as the voice of moderation and maturity. “Love is not everything,” he says, “it is only when we are young that we think it is.” He starts to hint gently that the “big and square and incredibly simple and boyish” Simon is not worth Jackie’s angst, particularly if he was willing to leave her for Linnet. There are moments when Jackie seems to start to see this, but she is overwhelmingly driven by her twin senses of love and justice. We share in Poirot’s sense that his words have done no good and that some kind of tragedy is inevitable.

After Linnet’s murder, the book follows the familiar structure of Poirot books, where he and a Watson figure (this time, one Colonel Race) interview the subjects one-by-one, perform searches of their rooms, and wrap everything up with a long monologue revealing the solution (which, naturally, prompts the murderer to spontaneously confess.) Yet this is saved from becoming too tedious by the fine characterizations of even the minor characters.  Christie is often dismissed as a first-rate plotter and a second-rate author: while she cooks up devilishly ingenious murder schemes, her prose leaves much to be desired. It’s true enough that, over the course of 66 crime novels, she went to certain wells too often: her characters, especially, were often repetitively formulaic and hastily sketched types. This is not the case in Death on the Nile: the suspects and witnesses are real characters with real problems, and we are invested in the reasons they have for hiding the truth. These are things that Christie often writes about with great perceptiveness: genteel slides into poverty and repressed family dynamics.

These well-formed characters get some nice meaty subplots. One of the most powerful of these involves another young passenger, Rosalie Otterbourne, the daughter of a flamboyant romance novelist facing a dwindling readership. Rosalie’s mother is struggling with alcoholism, and her daughter is embittered and worn out from trying to hide and stop her drinking. “I’m odious,” she sadly declares to Poirot, hating the cold and standoffish person she’s become. Trying to recover herself, Rosalie goes through tragedy and a strange kind of happy ending. Another great story concerns Cornelia Robson—a highly enthusiastic and, in her own estimation “sort of homely looking”—poor relation who has come as a companion to her rich American cousin. Cornelia is sunnily optimistic and takes delight in every sight and experience on the trip (even, to her shame, the excitement surrounding the murder), while uncomplainingly taking all the abuse thrust upon her from her ancient and snotty cousin Marie. Cornelia—who Poirot aptly describes as a woman of great character—ends up with two suitors: a bloviating socialist who admires her independent spirit and kindness, and a bloviating doctor who likes her curves and her usefulness as a medical assistant. The suspense of who Cornelia will choose touches on another area where Christie often (despite her anti-feminist stance) shows great insight: the personalities and desires of the women who society overlooks or pities, and the options they have for making different lives for themselves.

The end of Death on The Nile takes on increasingly reflective and morose tones. The string of murders (yes, naturally, there are more) on the boat, along with the impressive settings of ancient tombs and temples, have the characters thinking on mortality and eternity. They process real trauma as a result of these events. And when, with all the usual flourishes, the killer is finally revealed, there is a profound sense that not only has something terrible happened, but that it was also completely senseless, and that many lives have been wasted. As in all the best of Poirot’s cases, his deep belief that murder is “the unforgivable offense” rubs up against the personal sympathy he feels for the murder, and questions of what kinds of criminals deserve what kinds of punishments. The book’s dénouement is truly shocking, causing reverberations that cannot be tied in a neat bow at the end. It’s a troubling, but fitting, finale to a book where Christie breaks so many of her own rules but also masters all the things that make her work great. 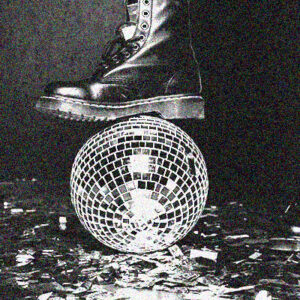 It was 2006. Heartbeats by The Knife was raging through the plastic pores of our computer speakers as we thrust our legs...
© LitHub
Back to top