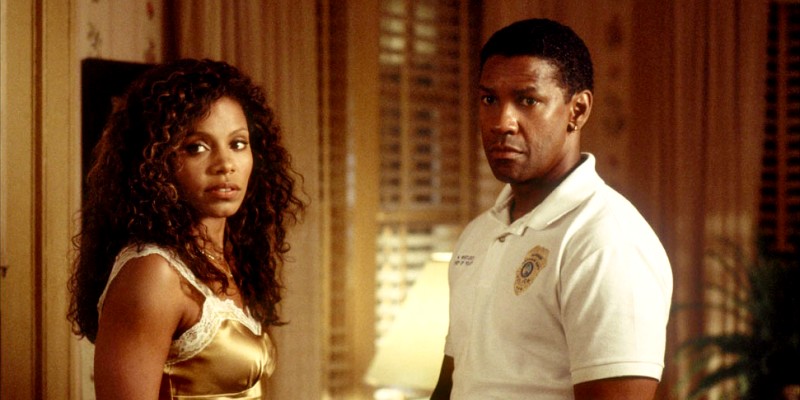 It's a small island with some good friends, lots of adultery, and a very elaborate framing for murder. Welcome to Banyan Key.

There are some movies that promise a great time and satisfying trip in the first shot. “Out of Time,” the 2003 potboiler starring Denzel Washington is such a film. When the camera pans onto the quiet, neon-lit, and palm tree lined main street of Banyan Key—a fictional Florida Keys town—it is impossible not to feel an overwhelming urge to crawl inside the screen, light a cigarette in the doorway of the “Scuttlebutt,” Banyan Key’s neighborhood haunt, and step inside for the first buzz in a new life. You might make a big drug bust. You might have an affair with a beautiful, but married woman, or you might find yourself deceiving and misdirecting all of your colleagues in local law enforcement, along with your soon-to-be ex wife—a county homicide detective—when you realize that you’ve been expertly framed for murder. If you are Denzel Washington’s character, Banyan Key Chief of Police, Matthias Whitlock, you are going to do all of the above.

In the opening scene of “Out of Time,” Whitlock walks from the charming, noirish downtown to the police station where he polishes off a bottle of Miller Genuine Draft at his desk. He receives a call from a frightened, but not too frightened sounding woman reporting an attempted burglary in her home. Whitlock says, “I’ll be right there,” and pauses only to take the last swig of his beer. The would-be crime victim, an electrically seductive Anne Merai Harrison, played by Sanaa Lathan, leads Whitlock to the bedroom where she demonstrates how the supposed assailant wrestled her to the bed, but as Whitlock suggests, “You took control.” As their amorous exchange intensifies, and it becomes clear that the call for help was a ruse to cover for another desire, Whitlock gets an emergency call from one of his subordinate officers. The opening credits appear on the screen.

There is hardly anything more important for a film, especially a crime film, than to establish a mood. “Out of Time” has mood for miles. The score from Graeme Revell is particularly effective, because it is an indicative of the general spirit of the movie. Combining elements of Latin jazz and calypso, the composition featuring steel pans, classic guitar, and trumpet instantly transports “Out of Time’s” audience to a warm and beautiful seashore where margaritas and mojitos are ready for imbibing. But there is also something faintly ominous about that trumpet. Alongside the tropical drinks, trouble is brewing. At the same time, the trouble never feels too intense to cast the viewer into a morbid mood.

“Out of Time” pulls off a rare trick of cinema. It brings you to the edge of your seat, but allows you to remember that it is only a movie. The stakes feel high, but “Out of Time” is adept enough to not raise them so high that they ruin your imaginary vacation in the Keys. 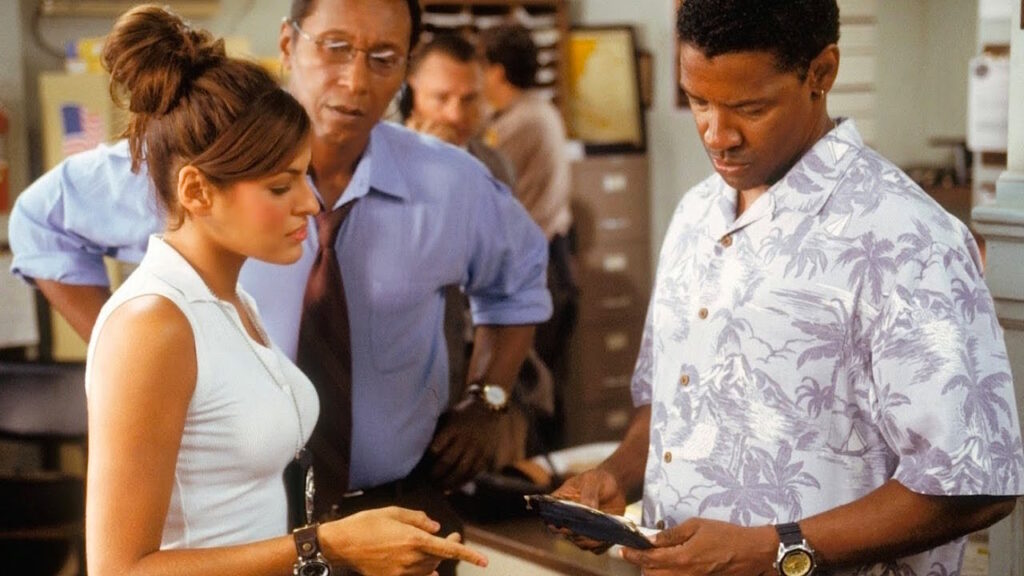 Much of the efficacy of “Out of Time” is attributable to the smooth and energetic direction of Carl Franklin and the characteristically charismatic performance by Denzel Washington. Franklin and Washington had previously worked together on the excellent adaption of Walter Mosley’s first Easy Rawlins novel, “Devil in a Blue Dress.” The source material of Mosley’s brilliant book makes for a more substantive movie, but for escapist entertainment, and sheer delight, it is tough to overlook “Out of Time.”

For the same reason, “Out of Time” feels made to order in a pandemic. Even if you are in quarantine and waiting on sunny skies and a vaccination, you can experience one hour and forty-five minutes of pleasure with Washington, Lathan, and Eva Mendes as your tour guides. The palm trees, the ocean, the boats, the pink hotel buildings, the open air bars, and the permanent whiff of sexuality are the attractions of a much needed trip. And don’t discount the importance of Denzel Washington’s Tommy Bahama shirt collection.

When we meet the Tommy Bahama shirt clad chief of police, he is preparing to divorce the wife with whom he is still madly in love (Eva Mendes), and carrying on with a local woman married to his town rival, an abusive hospital security guard whose NFL dreams were cut short by an injury, played by Dean Cain. Days before we meet the cast of characters, Chief Whitlock supervised a drug bust resulting in the confiscation of $485,000.

When Whitlock’s girlfriend’s husband goes out of town, the secret lovers embark on a weekend of ecstasy on the chief’s old boathouse. Their plans are cut short by a phone call from Anne’s doctor, or so it seems, imploring her to immediately meet him at the hospital. In the doctor’s office, the physician comes out of from behind the desk offering pre-emptive consolation. Anne almost descends into tears, and Whitlock gasps in horror and confusion, when the doctor explains that “the cancer has spread to her liver and lungs,” and that she has only six months left to live. Distraught, she runs out of the office. Whitlock inquires if there are any treatments, even “experimental, ’60 Minutes’” methods. The doctor explains that there is a cutting edge clinic in Switzerland with a high success rate, but insurance companies won’t cover it. The cost is $500,000.

The next scene, even if entirely predictable, could cause any viewer to protest in vain, “Oh no.” Whitlock gives Anne the drug bust money, confident that the appeals process will delay the DEA’s request to take the cash into its own custody by many years. After feigning disapproval, Anne offers gratitude, and asks Whitlock to meet her for their flight to Switzerland later that evening. She promises to call with the details. 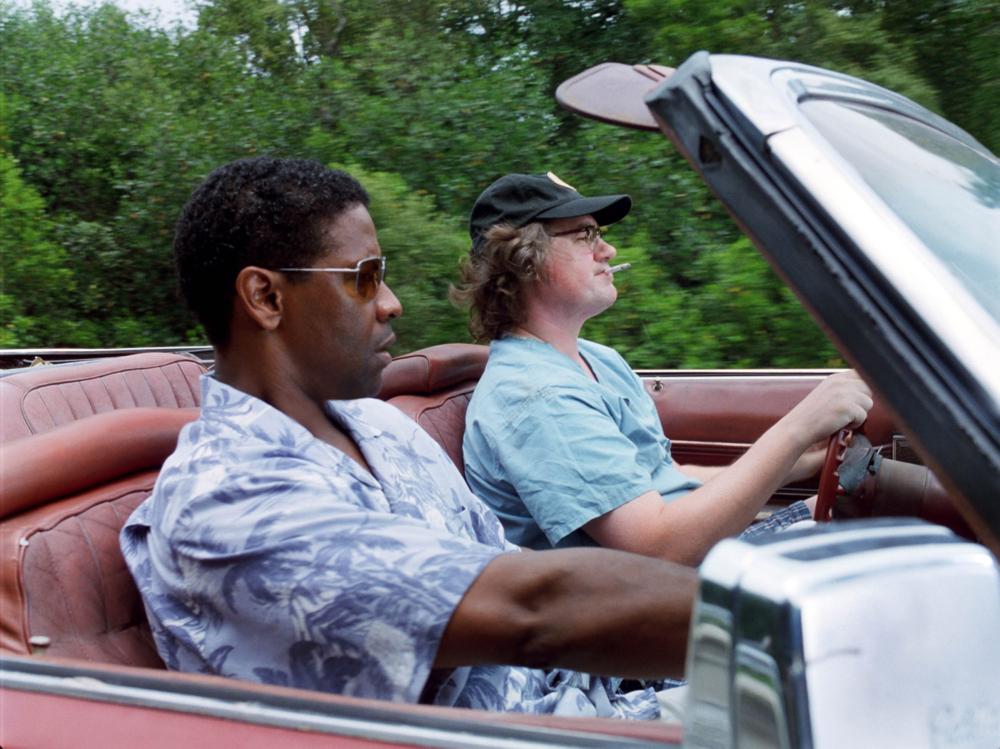 Of course, the call never comes. When Whitlock takes it upon himself to visit her home, there is no sign of her or her husband, but an elderly neighbor across the street does happen to catch him prowling around the premises, peering into windows. She will give her description, despite her poor eyesight, to the police sketch artist the next day when Anne’s house has burnt to the ground, and the police find two dead bodies. Charred beyond recognition, everyone assumes that the corpses were once Anne Marie and her husband.

A day out of Whitlock’s most terrifying nightmares becomes even worse when, with perfect timing, the DEA calls him to explain that they need to check the serial numbers on the money his department commandeered from the big drug bust. They have suspicions that the cash ties into a separate ongoing investigation of narcotics trafficking.

“Out of Time” acts as a tutor in how best to use time itself for the purposes of cinematic storytelling. The first forty five minutes move at a slow, but pleasant pace, giving the audience time to meet the characters, familiarize themselves with their personalities, and gain a full appreciation for the circumstantial background that will eventually make the action and suspense more hypnotic and entertaining.

From the second act to the conclusion, “Out of Time” finds several clever ways to use the clock as Whitlock’s greatest foil. He always has to reach his destination, complete his task, or evade the eyes of his colleagues and homicide detective spouse without a second to spare.

Given that there is only one brief fight scene, and an even briefer turn of events involving the exchange of gunfire, “Out of Time” is noteworthy for its creative devices of excitement. As much as it might seem difficult to believe, one of the most pulse pounding scenes of the film depicts the simultaneous use of a printer that doubles as a fax machine.

Nothing in “Out of Time” is experimental or reinventive, but it is a highly adept take on the familiar story of an isolated hero racing against the world at the precise moment it seems to have conspired against him. Whitlock’s lone ally, a wisecracking, boozy medical examiner, not only saves him from a few jams, but gives the movie its moments of levity and comic relief.

Through the laughter, lust, and tension it always seems clear that Whitlock is going to defy the odds, and somehow prevail, proving that the most important element of storytelling, cinematic or otherwise, is typically not the “what” or even “why,” but the “how.”

Frank Zappa famously said that “talking about music is like dancing about architecture.” Similarly, sometimes it is best to simply watch the film. As spring promises the arrival of summer, and many people are still spending an inordinate amount of hours in their homes, there is no better opportunity to allow the imagination to travel to the Banyan Key, and discover that “Out of Time” is one of most underrated crime films of the 21st Century. 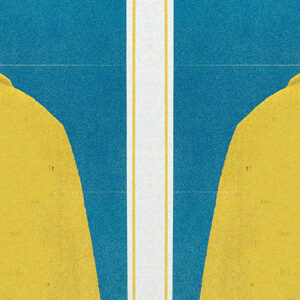 We all think of Sherlock Holmes as a rational thinker, a scientist, a man who uses remarkable powers of inference, deduction...
© LitHub
Back to top