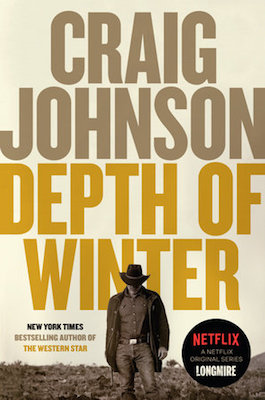 The following is an exclusive excerpt from Depth of Winter, the latest from Craig Johnson to feature his iconic sheriff, Walt Longmire. In the following passage, Longmire heads to Mexico to help his daughter out of some trouble.

“Good to meet you.” He lifted his uncle from the wheelchair, carefully placed him in the passenger seat, and then put the conveyance into the cavernous rear.

I leaned forward, but the Seer stopped me with his cane. “We have not discussed the fee for our services.”

He gestured toward his nephew and stuck a hand out. “One hundred US dollars apiece per day, plus expenses.”

“Driving this, gas alone should be another thousand.” I shook his hand and noticed how strong his grip was, then reached out and tapped the Longhorn steer horns mounted on the hood. “So is this the inconspicuous vehicle we’ll be taking south?”

He grinned, and you could tell that he and the Seer were from the same genetic corral. “We will see you tonight at Our Lady of Guadalupe Cathedral.” He threw an arm over the side of the Caddy and pointed down the street. “I will meet you inside a little before nine p.m.” He turned his head. “Any questions?”

“Yep.” Running my eyes over the glossy flanks of the hot pink Caddy and the outrageous tailfins, the largest ever produced, I stuffed my hands in my jeans and glanced at him. “How much Mary Kay did you have to sell to get this thing?”

I was a stranger in a strange land, and my backup was a legless, blind humpback and his Coke‑bottle‑lensed, Caddy‑driving nephew, neither man instilling a great deal of confidence.

On the long trip back to the Avenue Benito Juárez bridge, I thought about what I was doing. I was a stranger in a strange land, and my backup was a legless, blind humpback and his Coke‑bottle‑lensed, Caddy‑driving nephew, neither man instilling a great deal of confidence.

The sidewalk became more crowded as I approached the Border Patrol building on the right, and I was reminded of the cattle chutes we used in Wyoming as I took the general entrance back into my country instead of the one to the left for Americans with documents.

I had to remember to get a passport.

Standing in the long line, I looked around me and figured that the Seer had been right about my blending in—I was going to have to lose about eight inches, forty pounds, and investigate a pigment transplant.

Behind the Plexiglas, a bored‑looking young woman gestured for me to step forward. “American citizen?”

I pulled out my driver’s license and handed it through the opening at the bottom. She studied it for a moment, and I watched as her left hand slipped beneath the counter. A moment later another uniformed individual was standing beside her and motioned for me to go to the unmarked door to the right, not the general one to the left.

“Is there a problem?”

“Not really, except that you’re supposed to have a passport to enter Mexico, even if you don’t really need one to get back in the US.” The older man who was stationed behind the young woman motioned again, and she turned back to me with a prac‑ ticed smile. “Just a routine check—you’re the lucky one‑millionth customer of the day.” I nodded and followed my license; the heavy door buzzed, and I pushed it open and entered a short hallway. The Border Patrol guy appeared from the other side and pointed toward the door at the end of the hall.

“Do I get a prize or anything?”

I walked down the hall and just as my hand touched it, the door buzzed and the lock sprang.

FBI Special Agent‑in‑Charge Mike McGroder sat reading from a file folder at a metal table with his loafered feet on its surface. “I told you not to go by yourself.”

“Your socks don’t match.” I sat in the chair opposite him. “I was just doing a little sightseeing. Did you know that Marilyn Monroe got her divorce from Arthur Miller in Juárez?”

“Did you know he was hung like a cocktail sausage?”

“Walt.” He glanced at the camera in the corner of the ceiling behind him. “You were reconnoitering in a foreign country, and you’re lucky I’ve got pull and can get you back in this one.”

“As far as I can remember, I’m an American citizen.”

“An armed American citizen in Mexico, which means you get the nicest corner cell in the shittiest maximum‑security prison in the Free and Sovereign State of Chihuahua.”

“I just wanted to get the ball rolling.”

“Okay, Sisyphus.” He put his feet on the floor, tossed the file onto the table, and ran a palm over his crew cut. “I’ve got you a meeting with the AIC and the DEA guy here in El Paso tomorrow at four‑thirty.”

“Walt.” He placed his elbows on the table, lacing his fingers as a chin rest. “They know you’re coming. Hell, they’re planning on you coming, and they’re going to have a very warm reception for you.”

“I’m just trying to give you a fighting chance at survival.”

“Look, let’s set ourselves up for success here. I think getting your daughter out of Mexico and you surviving it is what we’re shooting for.”

Article continues after advertisement
“Look, let’s set ourselves up for success here. I think getting your daughter out of Mexico and you surviving it is what we’re shooting for.”

“Me surviving would be nice, but I doubt it’ll happen.” I sat back in my chair with the image of a five‑year‑old girl with red‑ dish hair dancing through a pasture as the horses looked on. “He knows I’m here, he knows I know he’s got her, and he’ll kill her if I don’t play by the rules.” I reached under my lightweight jacket and pulled the aforementioned .45 from the small of my back and placed it on the table between us. “That’s what I’ve got. Now I know I’m going into a fight, so I’ll gladly trade it for a rifle, a shotgun, an RPG, a Sherman tank, or an atomic bomb— but that’s what I’ve got.”

“Not anymore.” He reached across the table and slid my Colt back toward him without looking at it. “You wait until tomorrow afternoon for the meeting with the authorities, and then we’ll formulate a plan to save your daughter.”

I coughed a laugh. “You think those guys know what’s going on down there?”

“More than some jumped‑up sheriff out of Wyoming, yes.” He waited a moment and then added, “You arrived last night, what the hell is the hurry?”

I stood, and for a lack of anything else to do, took a few short steps. “My daughter, Mike. It’s like I’m walking around with a hole in the middle of me, and all I can do is listen to the wind blow through. I’m going to do something, and I pray it’s not the wrong thing, but I’m going to do something.” I made the next statement to the camera lens in the corner. “I’m not waiting. He’ll know we’re planning something and then will fold up the tents along with Cady and they’ll disappear, and I can’t have that.”

Mike came around the desk and sat on the corner. “You don’t know what you’re doing, and you could set off a cartel war that might wind up killing thousands of innocent people.” His turn to glance at the camera. “I need your badge.”

“You didn’t give me this badge, the people of Absaroka County did.”

“Let’s not make this any harder than it is, okay?”

Turning my eyes back to him, I pulled the badge wallet from my shirt pocket, holding it for a moment, and tossed it on the table. “You’re arresting me?”

“We’re not letting you back into Mexico.”

“Try and stop me.” I walked toward the door where I’d come in, but the latch held fast. I turned to look at him.

He picked up my sidearm and wallet, placing them together in one hand and stuffing them under his arm. “I just did.”

It was a waiting room, but both doors were securely locked, so it might as well have been a cell. There were three chairs and the desk where McGroder had had his conversation with me. I’d seen a lot of those desks in federal buildings—somebody must’ve had a sale.

I sat behind it and looked for the button McGroder must’ve used to unlock the doors but couldn’t find it. Opening one of the drawers, I discovered two paper clips, a busted Swingline stapler, and a thumb‑worn biography of Ambrose Bierce so old that he might’ve owned it himself before disappearing into Mexico all those years ago.

By chapter five, I’d decided that the book was actually pretty good and only lowered it when an elderly gentleman in coveralls opened the door through which Mike had disappeared.

The custodian was holding a mop and kicking a commercial bucket in front of him as I stood. He saw me and started to close the door, but I recognized an opportunity when I saw one.

A Reader's Guide to K-9 Mysteries 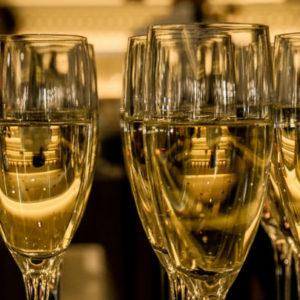 The 2018 Anthony Award Winners This weekend, the mystery community gathered in downtown St. Petersburg, Florida, for the annual crime fiction extravaganza...
© LitHub
Back to top