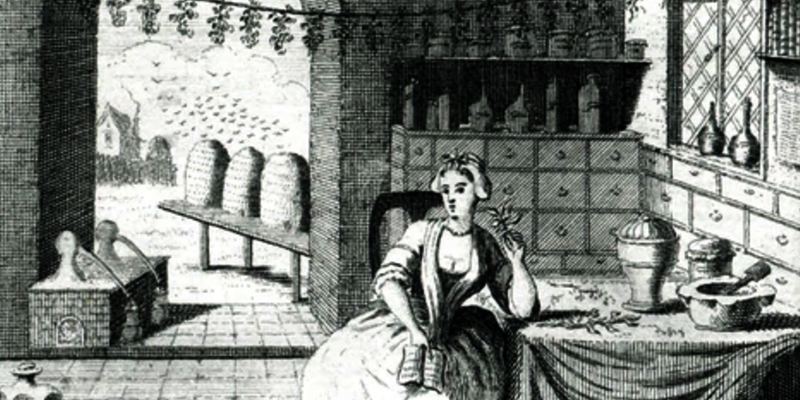 On the range of cures, effective or otherwise, available in the seventeenth century.

Hidden in the Derbyshire Dales, in a hollow where the crags of the Dark Peak meet the hills of the White Peak, is the village of Eyam. It is an ancient place, settled in Anglo-Saxon times, with a rich history of lead mining. Eyam is ‘the plague village’, burdened and burnished by a story of remarkable sacrifice that has endured the centuries. In the autumn of 1665, with London decimated by the plague, and with this small Derbyshire village still affected by the religious conflict of the English Civil War, a delivery of clothing and cloth arrived at the tailor’s house, bringing with it rat fleas and the bubonic plague they carried. Within a few days of the cloth arriving, the tailor’s journeyman, George Viccars, had fallen ill and died. As the disease spread steadily through Eyam, from house to house, the wealthier villagers were able to escape—having other homes to flee to. But tenant farmers, lead miners and labourers had nowhere else to go, and couldn’t afford to leave their livelihoods behind.

The villagers did what they could to protect themselves—staying inside when they became ill, offering prayers and asking for forgiveness from God. Some wore charms and talismans next to the skin, or pressed bunches of sweet-smelling flowers (tussie mussies) to the face. Pomanders stuffed with spices were hung around the neck. Gun powder and aromatics were burned in the home to purify the air.

In June 1666, with more than seventy dead and cases rising rapidly, the rector, William Mompesson—together with the exiled dissenting minister, Thomas Stanley—persuaded his parishioners to quarantine the village. They knew shutting themselves away meant certain death for many, but they hoped to prevent the plague from spreading beyond the village boundary to the nearby towns of Bakewell, Buxton and Sheffield, where the death toll would have been devastating.

In the seventeenth century people turned firstly to God when looking for protection or hoping for recovery from illness or disease. After that…they looked to physicians, cunning folk, herbalists, astrologers and apothecaries.

In the seventeenth century people turned firstly to God when looking for protection or hoping for recovery from illness or disease. After that—depending on what they could afford—they looked to physicians, cunning folk, herbalists, astrologers and apothecaries. Cunning folk were affordable and usually available in rural areas, as were herbalists. Physicians were expensive and generally located in towns and cities, although would always travel to their wealthy patients (at a cost). Apothecaries were also generally based in urban areas, running shops with laboratories located at the back of their premises. An apothecary offered general medical advice and dispensed medicines and ingredients to the public, as well as selling wholesale to other medical practitioners. In the seventeenth century, apothecaries also controlled the sale of tobacco which was imported as a treatment for lung conditions and other ailments. Apothecaries were members of The Company of Worshipful Apothecaries, the roots of which go back to the Guild of Pepperers, established in 1180.

Apothecaries made pills, waters, alcoholic cordials, syrups, lozenges, floral confects and ‘condited’ (pickled) roots. Infusions were boiled over a fire. Tinctures were made by dissolving a plant’s oils into alcohol. Decoctions involved steeping harder substances (like bark) in hot water for hours, even days. Compresses, poultices and plasters allowed plant and animal materials to be applied to the skin with heat and moisture. An individual in the seventeenth century, with the means to pay, had a plethora of preventatives and curatives at their disposal—no matter their ailment.

It is important to say that it wasn’t only apothecaries who made such remedies. Large houses often had a ‘stillroom’—a place set apart from the smoky kitchen, where confectionery, preserves, cosmetics and medicines were prepared. It was the woman of the house who oversaw the work of the stillroom, so it was the case that many ‘gentlewomen’ worked with herbs—and poisons—just as apothecaries did. In fact, women at all levels of society in the early modern period, whether rich or poor, were involved in creating herbal remedies of one kind or another for the health and wellbeing of their families. But although many women grew their own herbs for simple medicines or cordials, it was usually only gentlewomen and apothecaries who possessed the expensive equipment and quantities of ingredients required to make the more complicated and luxurious remedies—distillation being the most prized and sophisticated of medicinal processes.

Distillation involved heating a liquid to create a vapor in a container called an alembic or still, then cooling the vapor to produce another (scented or flavored) liquid. The process was necessary to produce ‘waters’ and essential oils. An apothecary’s laboratory and a gentlewoman’s stillroom therefore boasted furnaces, stills (copper, pewter or glass), pans, skillets, funnels, sieves, gallipots, graters and vials. Distilling was a demanding process associated with skill and high status; distilled substances were regarded as ‘perfected’ and therefore highly sought after.

Of course, apothecaries used a great many plants, herbs and flowers in their medicines. But they also experimented with rare, hard to procure, ingredients in the hope that wondrous substances would herald wondrous results—gold leaf and powdered pearls were commonly used in medicines for the aristocracy. Apothecaries also used a multitude of ingredients that may challenge our modern sensibilities. Nicholas Culpeper believed snake flesh to be good for eye complaints. Blood, hair, mummified human flesh and unicorn horns were all thought to possess powerful medicinal properties. Some recipes (known then as ‘receipts’) from the early modern period involve the use of skinned puppies, snails, woodlice and worms—especially in cosmetics. A receipt for an ‘oyntment for burning’ from Lady Fanshawe’s Receipt Book, by Lucy Moore, includes the use of pig fat and fresh sheep dung, fried until hot and strained through cloth.

Poisons played an interesting role, with diseases themselves often viewed as poisons within the body—involving putrefaction that needed to be drawn out or dried up using astringent or poisonous substances: the principle of curing ‘like with like’. For example, arsenic and antimony were rubbed into the skin or used in a poultice, or simply worn against the skin, held in place with strips of cloth or ribbons. Toads and bezoar stones (a hardened mass of chewed hair from a ruminant animal’s stomach) were used in the same manner—often being strapped close to a person’s heart for a period in the hope that these objects would draw the poison from the patient’s body. Teething infants might have a wolf’s tooth tied about their neck – a remedy for aching gums.

Apothecaries kept their poisonous substances in specially shaped vials, so they would not be mistaken for harmless ingredients. But despite their deadly potential, some poisons were frequently used to treat patients. Henbane, also known as black henbane or Stinking Nightshade, was used to treat rheumatism, toothache and persistent coughs, despite all parts of the plant being highly toxic and fatal even in small doses. Mandrake, often referred to as The Devil’s Turnip, also poisonous, was used to treat stomach complaints, and as an antidote to other poisons as it induces vomiting.

Ricin is a poison that many are familiar with these days—it has been in the news over the last few years with the FBI investigating several attempted poisonings of high-profile individuals using the substance. Ricin comes from the seeds of the castor oil plant—also known as thornapple, or Devil’s Snare. Although highly toxic, this plant was used in the seventeenth century as an anti-spasmodic and applied by way of a poultice onto festering wounds. Meadow saffron, also known as Naked Lady, was used in the treatment of gout, but could easily bring about the death of a patient if given in higher doses. And Hemlock, which can cause paralysis and death through asphyxiation, was mixed with betony and fennel seeds as a treatment for rabies.

Even if an apothecary, cunning woman or gentlewoman did not work frequently with poisons, it was absolutely necessary for them to have a good understanding of which plants posed a danger. It is perhaps no surprise then that, historically, poison has been perceived as a woman’s weapon—in the simplest terms it is a weapon available to her. Women have long been portrayed as more duplicitous and conniving than men: well capable, if they choose, to plot the downfall of an enemy. In the seventeenth century women were marginalised, confined to a tiny number of occupations and socially acceptable roles. Midwives, cunning women, and gentlewomen in large houses all had the opportunity to become experts in the use of herbs – including poisons. How unsettling this must have been for those men most invested in maintaining power and control over the women in their lives. Violence against women was commonplace in early modern Britain. It was legally and culturally permissible for husbands to beat and rape their wives, and women had nowhere to go for help. A woman was expected to obey her husband, no matter what. When relations sour, it is no wonder that men start to wonder what their womenfolk might be up to with those herbs they know so much about. Apothecaries aside, herbal medicine was a woman’s domain. And knowledge is power.

Set in Eyam, in 1665, The Hemlock Cure is a crime and secret-filled novel, with an apothecary and his daughter at its dark heart. 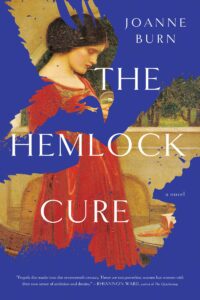 Joanne Burn lives in the Peak District of England, where she is a writing coach. The Hemlock Cure is her latest novel. You can find her at https://www.joanneburn.com/ 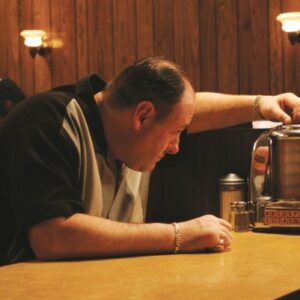 Fifteen years ago, The Sopranos ended its six-season run on HBO, going out with neither a bang nor a whimper.  Much has been...
© LitHub
Back to top