England’s Lake District: All the Calm and Placid Water Hides an Awful Lot of Murder

Crime and the City takes a late summer holiday with the crime fiction of the Lake District.

The Lakes, the northwestern English county of Cumbria and close to a thousand square miles of pristine countryside. A popular holiday destination, perfect for a late summer getaway, a chance for Crime and the City to recharge away from the mean streets.

When you think of the English Lake District and literature you probably recall the Lakes poets—William Wordsworth, Samuel Taylor Coleridge, and Robert Southey. Romantics, often joined by their friends and lovers Dorothy Wordsworth, siblings Charles and Mary Lamb, Thomas De Quincey. And somewhat later Beatrix Potter and her cast of cuddly characters. Peace and quiet, the rolling hills, mountains, and the beautiful lakes themselves. Now, admittedly both Coleridge and De Quincey did dabble in the narcotics trade, and many might suggest Potter was smoking something stronger than tobacco to see all those talking animals, but by-and-large we don’t really associate the Lake District with murder, mayhem and criminal activity. But perhaps we need to rethink our positions?

Lakeland has long had a crime writing tradition. John Bude’s The Lake District Murder from 1935. Now back in print thanks to ‘Golden Age’ crime aficionado Martin Edwards and the wonderful British Library Crime Classics series he edits. The Lake District Murder is the first in a series featuring Chief Inspector Meredith, a specialist in penetrating the false alibis of his suspects. Here the body of a man is found at the lonely gas station where he is a partner, asphyxiated by petrol fumes. It is at first taken to be suicide until several discrepancies prompt the police to take a closer look. Bude’s later books roamed the English countryside far and wide—the Sussex Downs, the Cornish ‘Riviera’, a few random country houses in the grand English tradition.

Let’s get a bit more contemporary, though no less pastoral. Rebecca Tope is a prolific author of rural mysteries. She writes two major series—one set in the Cotswolds (another beautiful area though more towards central England) and the other in the Lake District. There are now eleven books in the Lakes series starting with The Windemere Witness (2012, and after the famous lake of the same name)—florist Persimmon ‘Simmy’ Brown has moved to the Lake District. All is going well until a millionaire’s daughter is found dead in the lake, Simmy is suspected, and the local secrets come pouring out. Simmy appears again in the second book—The Ambleside Alibi (2013). All the books are named after places in the Lakes—The Coniston Case (2014), The Troutbeck Testimony (2015), The Hawkshead Hostage (2016), and my own favourite Book 8, The Grasmere Grudge (2019)! By Book 11, The Threlkeld Theory (2022), Simmy is still getting caught up in murder investigations. The books are fun, cosy and, fear not, the death toll of the series far, far exceeds the murder rate of the Lake District in the last century!! And Tope shows no sign of slowing down her output, confident that there are dozens more Lakeland villages and tourist sites to work up into mystery book titles.

As coincidence would have it our old friend (and occasional CrimeReads contributor) Martin Edwards has his own Lake District-set series. His The Lake District Cold Case Mysteries books now number eight starting with The Coffin Trail (2011). Oxford historian Daniel Kind and his partner Miranda both want to escape to a new life. On impulse they buy a cottage in Brackdale, an idyllic valley in the Lake District. But though they hope to live the dream, the past soon catches up with them. By the way, for the uninitiated, the “Coffin Trail” is an old corpse road running between Ambleside and Grasmere. Corpse Roads were the traditional way dead bodies were carried out of remote parts of the Lakes. Daniel and Miranda continue to look into local unsolved crimes with DCI Hannah Scarlett, head of the local Cold Case Review Team. The most recent in the series, Book 8, is The Crooked Shore (2021) with DCI Hannah Scarlett hunting a killer against the backdrop of local Lakeland legends.

Rachel Lynch writes the Helen Scott Royal Military Police thrillers, but also the long running DI Kelly Porter series. When we first meet her in Dark Game (2018), Porter has been forced out of the London Metropolitan Police and returns north to her home in the Lake District (also home to the author Lynch) to work with the Cumbrian constabulary. It’s run of the mill police work—nothing sensational, nothing too tricky—until the abduction and brutal murder of local ten-year-old Lottie Davies. As the book’s blurb says, “Behind the veneer of sleepy, touristy towns lies a dark and dangerous underworld.” Not sure the Lakeland tourist agency will approve these books! All the books feature a lot of murders (that Lakeland body count is really getting out of control now!!) and plenty of scenery. By Book 10, the most recent, Sudden Death (2022) aristocrats are dying in helicopter crashes. Awful, but all near the beautiful Wast Water and Scafell Pike, England’s highest mountain. Tragedy, but stunning vistas…My personal favourite is Lying Ways (2021), which is centred on Her Majesties Prison Highton, a fictional prison in the remotest part of the Lake District

MW Craven’s The Puppet Show (2018) is also the start a series and won the 2019 UK Crime Writers’ Association Golden Dagger award. A serial killer is burning people alive in the Lake District’s prehistoric stone circles. Disgraced detective (and rather oddly named for a Brit) Washington Poe is brought back from suspension by the UK National Crime Agency to investigate along with the socially awkward, civilian analyst, Tilly Bradshaw. The series rolls on with Poe and Bradshaw—Book 3, The Curator (2020) is set at Christmas and a serial killer is leaving displayed body parts all over Cumbria. Again, the Lakes are showing a little more underbelly than usual. In Dead Ground (2021) Poe investigates a man beaten to death with a baseball bat in backstreet brothel in Carlisle. Such a crime, and such a seedy venue may come as a surprise to many ordinary Carlisle residents more used to spending their time in a cosy pub with a warm pint or a teashop with a nice slice of Victoria sponge (admittedly the Washington Poe books do come with a decent sense of self-deprecatory humour). And, most recently, The Botanist (2022) features an organised crime boss, an alcoholic ex-journalist, a full-time shepherd/part-time dog sitter and a poisoner called the Botanist who is sending people he dislikes toxic poems and pressed flowers.

And let’s wrap up our trip to Lakeland with a stand-alone from Val McDermid, The Grave Tattoo (2011). It’s summer in the Lake District and heavy rain (sorry if I didn’t mention the likelihood of summer rain in the Lakes earlier!!) over the fells has uncovered a bizarrely tattooed body. Could it be linked to the old rumour that Fletcher Christian, mutinous First Mate on the Bounty, had secretly returned to England? Academic Jane Gresham wants to find out. She believes that the Lakeland poet William Wordsworth, a friend of Christian’s, may have sheltered the fugitive and turned his tale into an epic poem—which has since disappeared. What better way to spend time in the Lakes than with a centuries old mystery, some picturesque ruins and a beautiful lake?

And if you like your mean streets and noir don’t worry—we’ll back in the concrete jungle next time. 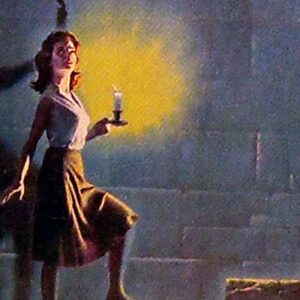 One of my favourite scary movies is The Changeling. George C. Scott stars as a famous composer who relocates from New York...
© LitHub
Back to top