A Blizzard of Polar Bears 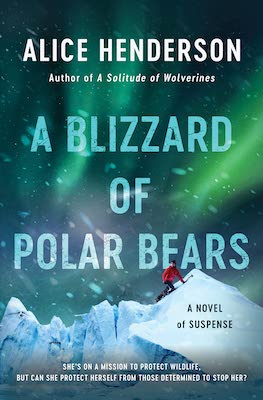 The following is an exclusive excerpt from A Blizzard of Polar Bears, by Alice Henderson. Studying a group of polar bears on a helicopter expedition to the Arctic, wildlife biologist Alex Carter imagines that the hardest task before her is getting close enough to the bears to observe them. But then a series of disasters (or are they sabotage attempts?) leaves her and her team isolated on a frozen sheet of ice. And that's when a group of armed trackers show up, following them.

The two cubs stopped abruptly and stood staring. As the biologists approached, one of the cubs moved toward them, curious. The cubs were tiny and probably fresh out of their den, putting them at a little over three months old.

A female polar bear reached sexual maturity when she turned five. She could have cubs from then until she was twenty. The cubs stayed with her for two to two and a half years, so females tended to have a litter of only one to three cubs every three years. Over a life- time, a mother bear typically had ten cubs. However, cub mortality was so high, with only a 40 to 60 percent survival rate, that polar bear populations grew very slowly.

Alex hoped these little guys would make it.

She knelt down and held out her hands, and the cub moved forward, sniffing her. Then she scooped it up, holding it against her chest. It lifted its muzzle, sniffing her face. She felt the wet cold of its nose against her cheek and couldn’t help but break into a grin. She felt bad she’d scared this family and was eager to reunite them. She turned, seeing Neil chasing after the other cub. It loped along, peering over its shoulder as Neil slid on the snowy ice and cursed.

Finally he caught up with it and pounced, scooping up the cub. She headed back toward the helicopter, the cub nestled against her. She wanted to be sure it stayed warm during all of this surprise and temporary separation from its mother.

At the helicopter door, she paused and let Neil climb in first, his cub struggling in his arms.

“Feisty little devil,” Neil murmured, finally managing to get inside the helo. The cub stared around, a bundle of energy, wanting to play and explore. Neil got into his seat and buckled up while the cub planted its paws on his knees and leaned forward to sniff at Ilsa. Alex’s cub was just as squirmy, and she stepped up into the chopper and buckled in, struggling to maintain a grip on it. It stared

up at her, bleating out plaintive baby bear noises.

Leaning over, she hefted the door closed and Ilsa powered up the helicopter again. They banked south, finding the mother just plopping down into the snow, the drug taking effect.

Ilsa deftly set the bird down and Alex slid open the door. Hold- ing on to the cub, she walked over to the sleeping mother and knelt down. The little bear immediately jumped down and climbed up onto its mother.

Neil appeared, the squirming white bundle in his arms, and set his cub down when he couldn’t hold it any longer. It raced over to its sibling and mother, then stood, its forepaws resting on its mother’s side.

They grabbed gear from the helicopter and immediately went to work. They had to move quickly before the sedative wore off. On the spectrum of too much sedative versus not enough, biologists always erred on the latter side. If it wore off before they were finished, Alex had a syringe with additional sedative. But hopefully they wouldn’t need it.

While Neil monitored the bear’s heart rate, temperature, and breathing, Alex knelt down by the massive white form. She took the bear’s ear in her gloved hands and examined the small white plastic disc with the bear’s ID number. She peeled down the bear’s lower lip to reveal the matching lip tattoo. Examining the spreadsheet, she learned the bear was nine years old and that these two cubs were her second litter.

According to the database, the bear had last been collared four years ago. Because that was the upper limit of how long a collar could last, Alex removed it. They had less invasive technology now. 3M had developed the Burr on Fur, a small GPS tracking device that adhered to a bear’s coat. She recorded the device’s ID number on the spreadsheet and then worked it into the bear’s hair.

Next she broke out the measuring tape and they took morphometric measurements of the mother, recording her length and girth. Alex calculated her weight using these readings. The bear was de- cidedly underweight, but not dangerously so. She and her cubs had a fairly good chance of surviving the year if they were able to catch some seals. She measured the head width and length, and then checked the bear’s tooth condition.

Alex took a number of other samples, including swabbing between the mother’s massive toes for bacteria. She took a photo- graph of the bear’s facial profile for the Whiskerprint Project. Each bear had a unique pattern on its face, places where black spots on their muzzles were visible, where whiskers grew. Photographing in this way was a noninvasive means to ID a specific individual from a distance, and Alex wanted to contribute to the growing database of the project.

Finally, opening up a small vial, she took a sample of the bear’s milk. From the milk, she’d be able to learn how many environmental pollutants the mother was passing on to her cubs.

They flipped the bear back over onto her stomach. Alex marked her back with a black animal-marking crayon so they wouldn’t capture her a second time this season.

The bear lifted her head groggily, staring around. Time to get back to the helicopter. Alex and Neil packed up their supplies while Ilsa stood watch with the shotgun. They didn’t want any other bears to approach while the female was still groggy and her cubs vulnerable. Male polar bears were known to kill and eat cubs.

But the ice was clear as they made their way back to the helo. The mother got up on her front legs, her cubs jumping on her back and nuzzling under her nose.

They loaded all the gear into the chopper and Ilsa fired it up. They hovered for a few minutes while the mother stood up and sniffed over her cubs. Ilsa lifted off, gaining enough altitude to watch the mother bear from a distance that wouldn’t spook her. She continued on her way with her two cubs. After searching for other bears for a while, they’d fly back by this way again, just to make sure all was well and the family was safe.

They flew around, searching for more tracks, with no luck. They doubled back to check on the mother and cubs. They were making steady progress along a seam. Relief washed over Alex. It always made her nervous to sedate an animal. And she didn’t like the invasive nature of capturing and tagging.

For the rest of their air time, they didn’t spot any more track- ways. Another weather system threatened to close in, so they headed back to Churchill. Alex felt a little disappointment they hadn’t seen more, but the family they had found, with the mother in relatively good shape, made her feel better. 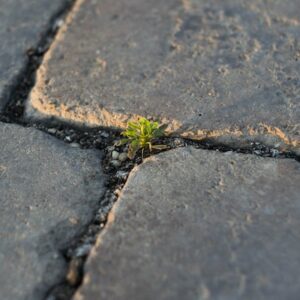 Is There a Connection Between Surviving Assault and Consuming True Crime? Between podcasts, documentaries, and books, the true crime genre is more popular and prolific than ever. Women account for nearly...
© LitHub
Back to top