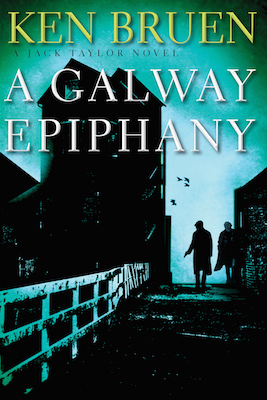 The following is an exclusive excerpt from A Galway Epiphany, by Ken Bruen. Former-cop-turned-PI Jack Taylor plans on enjoying his retirement, when he's in a horrible car accident and falls into a coma. When he wakes, he finds himself the center of a phenomenon known as "The Miracle of Galway," a religious-seeming intervention involving two children, who saved his life. Jack knows he has to find them to figure out what has really gone on, but he's not the only one looking for them.

Danny Doherty called me, said he had news.

If he had the name of the troll, what then?

Tell Stephen Morgan I knew who had terrorized his daughter into her grave?

Danny was dressed to impress as usual: fine suit, expensive raincoat, he looked composed. We were in the Meyrick hotel; seemed apt for serious business. We ordered coffee, didn’t speak until we’d settled. He had a file before him, said,

“Phew, this was a tough one, behind every firewall was another blind, then bounced back to three different locations.”

I wasn’t entirely sure what that entailed save it sounded difficult.

He opened the file, asked, “You sure you want to know?” I was.

“Okay, you’d expect a monster, at least in description, but it’s a woman, girl really, twenty years old, lives with her parents, and gets social security. In appearance she seems almost normal, drab really, doesn’t go down to the pub or hang with anyone.”

I said, “Spends her time frightening young vulnerable girls.” He considered that, then,

“Here’s her photo and address.”

She lived off Grattan Road, nice unremarkable house, a study in normalcy. The photo showed a girl rather than a woman, looking away from the camera, brown hair in long braids, a face that missed being pretty by a distance but makeup would have helped: Mostly, she looked young.

Her name was Greta Haut.

Unusual surname. The only time I’d ever come across it was the writer Woody Haut. Her parents were some sort of born-again Christians and belonged to a group that met on Wednesday nights where, it was said, some spoke in tongues. One wondered if any of them were civil.

Greta had been recruited by a top tech company but was let go for unspecified reasons. Like being a psycho, perhaps. She dressed like an ex-nun, that is, unremarkable, mainly old green combat jacket, high-top sneakers.

She had never been in trouble with the law save for a minor charge of stealing a six-pack of Red Bull. Most of her time seemed to be spent at home, destroying lives.

Danny gave me a look of mild distaste, said, “The wee lass is obviously unhinged.”

That infuriated me. I snarled, “Lass! She’s a full-formed psychotic bitch who gets off on tormenting vulnerable girls.”

Danny physically pulled back, as if I’d slapped him, said, “Whoa, get a grip.”

I bit down for a moment, trying to rein it in, tried,

“I’m just a little tired of excusing sick fucks that ruin others.”

Danny was done, stood up, said,

“I better go. I hope you won’t do something criminal here.” I offered,

“Let me pay you for your time.”

I had preparations to make for Greta Haut. In a dive bar off the docks, I bought some Rohypnol, the date rape drug. The guy who sold it to me didn’t bat an eyelid, then went to get a single bottle of Coke, screw-off top.

I also got a large knife, known as the Bowie blade, which had a serrated edge that would put shivers on a corpse.

Wednesday evening Greta’s parents would be attending their prayer meeting. I put my purchases in a small backpack, dressed in black jeans, black T, and threw in an old tie that had attended more funerals than I dare remember.

I broke into Greta’s house at eight that evening. No sophisticated locks; I guess born-agains are more trusting. The house was plainly furnished, attesting to tidiness more than money. I crept up the stairs, could hear the white noise of Greta’s PC. Her door was ajar. I pushed it open carefully.

Her back was to me, headphones on: She was dressed in sweatpants, sloppy sweatshirt. I tapped her gently on the shoulder. She nigh jumped a foot, screamed once. I gripped her hair, said, “Scream again and I’ll kill you.”

I pulled up my backpack, produced the bottle of Coke, my own flask, offered her the Coke, asked, as I offered the flask,

“You want something stronger in the Coke?”

She shook her head, her eyes wide but a nasty malevolence creeping in. I said, “Sláinte.”

She asked, “Is there poison in it?”

I gave her my best smile, all wolves, said, “The only poison here is you.”

She took a large gulp from the Coke, so step one done. She seemed to ease with the sugar rush, asked, “Are you going to rape me?”

I leaned back as if relaxing, then sprang forward, gave her one almighty lash to the face. Few things on earth pack such devastating heft. As she reeled back, I took out the rope, tied her securely to the chair, took out the tie.

Shoved it in her face, said, “This is the tie Meredith hanged herself with. You can keep it.” As she began to droop, I said,

“I am going to carve the initials you like so much into your forehead, slowly and large.”

I looked at her, said, “You’re even more deluded than I thought.” Then, she was out.

I had to force blank my feelings, because so much of me wanted to kill her.

I swept her laptop off the desk, allowing my full rage to knock it clear across the room. The desk was a beautiful oak; gorgeous, really.

I took the knife and carved deliberately and with malice flowing,

When her parents returned, them being Christian, they could express shock in the many tongues they’d acquired and no doubt attribute the deed to the devil.

They wouldn’t be entirely wrong.

Excerpted from A Galway Epiphany © 2020 Ken Bruen. Reprinted with permission of the publisher, The Mysterious Press, an imprint of Grove Atlantic, Inc. All rights reserved. 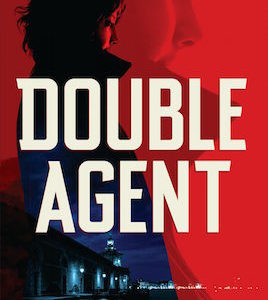 Double Agent Three weeks later Save for a thin skein of mist that curled its way around the dome of the Basilica di Santa Maria della...
© LitHub
Back to top