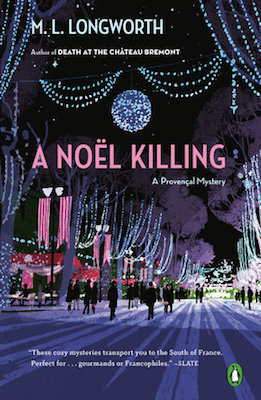 The following is an exclusive excerpt from A Noël Killing, by M.L. Longworth. The magistrate of Aix-en-Provence, Antoine Verlaque, does not like Christmas. His wife and partner, Marie Bonnet, is determined to change his mind. But when a murder takes place during the holiday season, Verlaque and Bonnet discover innumerable suspects and motives. And they don’t have long to solve the crime before the ordeal sours Verlaque’s feelings about the holiday, for good.

“We’re lucky we found spots to sit down,” Verlaque said, ripping off a piece of bread and dipping into some eggplant Parmesan the Italians had made. “Made with Tuscan olive oil. You can see its gooey green goodness running out the sides.”

Marine asked, “Did you try this?” pointing to a Pecorino cheese with tiny streaks of black running through it.

Verlaque took a piece and put it in his mouth. He closed his eyes and leaned back, his hands on his stomach. “Truffles.”

“It’s like a drug,” Marine said. “It must cost a fortune. What generosity.”

“Yeah, and we’ll all be lined up tomorrow morning at their food stand. Good marketing, I’d say.”

A woman on Verlaque’s right got up and someone else sat down seconds later, his plate piled high with food. “May I join you?”

Verlaque turned and saw the cathedral’s deacon, or rector, or whatever he was, smiling at them.

“Père Fernand,” Marine said, holding out her hand. “Please do.” They shook hands and she introduced Verlaque as her husband.

“You’re the examining magistrate,” the priest said, shaking Verlaque’s hand. “Marine’s mother has told me a lot about you.”

“That’s right,” Verlaque said. “That was a lovely service.” “Yes, I thoroughly enjoyed it as well.”

Marine asked, “Did you attend the service last year?”

“Oh, yes. They began this tradition six years ago. I’ve been to all of them, of course.”

“The candlelit moment,” Verlaque began. “Did they do that last year?”

“Yes,” Père Fernand answered. “Although I’m not sure of the song. It’s such a dramatic way to end the service. I thought that only we Catholics did drama.”

Verlaque smiled. He took a bite of a deep-fried boulette, smiling in delight. “Fennel, but with spice—”

“Karbar bès,” the priest answered. “I’m a big fan of Tunisian cuisine. The spicier the better.”

Verlaque eyed Père Fernand’s ample stomach and put him down as a fellow fin gourmet.

“I’m going to look up the recipe for these boulettes,” Marine said, wiping her mouth with a paper napkin. “They can’t be too difficult to—”

“Oh, dear,” the priest said, grimacing. “Did someone have too much of the Domaine Beauclaire?”

“Cole! Please, is there a doctor here?!”

“It’s Debra Hainsby,” Marine said, standing up to see over the heads of Antoine and Père Fernand.

There was nothing they could do, he felt, but sit there and hope the American was just having some kind of dizzy spell or upset stomach, and not something more serious.

Voices and the scuffling of feet echoed throughout the hall. “I’m a doctor!” a male voice called out. “Let me through, please!” Verlaque held Marine’s hand and squeezed it. There was nothing they could do, he felt, but sit there and hope the American was just having some kind of dizzy spell or upset stomach, and not something more serious.

Père Fernand mumbled, “Excuse me,” and got up, slowly walking to where a small crowd had formed, gathered around the outstretched Cole Hainsby.

“Cole!” Debra Hainsby called out once more, as she began weeping. Verlaque let go of Marine’s hand and got up from the table, making his way over as people began moving away from Cole Hainsby, their hands in their pockets, one or two of them quietly crying.

Verlaque arrived and knelt down. A man whom he recognized as a choir member and a doctor friend of Marine’s father leaned over the American’s body. The doctor looked up with recognition when he saw Verlaque. He shook his head. “He’s gone,” he whispered.

“I wouldn’t want to guess,” the doctor answered. “As I didn’t see what happened until he was here, lying on the floor. I’m a general practitioner; Jérémy Forestier.” They shook hands and Verlaque looked over at Debra Hainsby, slumped over in a chair, surrounded by people. “It could have been a heart attack,” the doctor said, leaning in closer to Verlaque, “or heart failure.”

“I’ve called an ambulance,” Reverend Dave said, kneeling beside them. He put a hand on Cole Hainsby’s shoulder. “Heart attack?” he asked, seeming unable to look away from the body.

Verlaque looked over at the tables. “Where was he sitting?” he asked, getting to his feet.

Dr. Forestier stood up and pointed. “There, the second table down, in the middle. I was closer to the end.”

Two young women stood at the end of the table, one of them holding a large tray while the other stacked plates and cups on it. They kept glancing at each other, as if by cleaning they would be helping in some way. Most of the other guests stood around in groups, talking quietly, or not saying anything at all.

“Thank you, Dr. Forestier. I’ll go and have a few words with Mme Hainsby,” Verlaque said. “My grandfather had a heart attack at an event much like this one, in Normandy . . .” He listened to his own voice trail off, unable to finish his sentence. What words of condolence could he say to the now-widowed Debra Hainsby? But he felt that, as a senior city employee, he should at least introduce himself and offer what comfort he could.

Verlaque was about to get up when the doctor leaned in, drawing Verlaque close with an arm on his shoulder. “I don’t want to raise unnecessary alarm bells, but there’s something odd—”

“The dead man has a skin rash,” Dr. Forestier said. “Although he may have already had that. I didn’t know him. But he also had what looked like burns around his mouth.”

“That’s not a symptom of a heart attack, is it?”

“No,” the doctor replied, looking around the room as he did. “It’s more a sign of poisoning. Please let me know what conclusion the coroner comes to.” He handed Verlaque a business card and they shook hands once more. Verlaque watched the doctor cross the room and exit through the green door.

Verlaque turned around and walked the other way, pulling up a chair beside Debra Hainsby. “Are you all right, Mme Hainsby?” Verlaque asked in English. “My name is Antoine Verlaque and I’m the examining magistrate here in Aix. That’s like a—”

“A judge,” she replied, looking at him with a vacant stare. “But you take an active role in crime solving with the police. I’ve read French crime fiction.” She buried her head in her hands. “Our children . . .”

“Are they here?” Verlaque asked, aghast. Had they just seen their father die?

“No, they’re on a weekend ski trip with their school,” she replied, looking up at him. “How will I tell them? They were so disappointed to miss this service.” From her tone, the irony was not lost on her, nor was it lost on Verlaque.

Verlaque tried to focus on making her as comfortable as possible. He could hear voices around him, and people moving. He heard the doors being opened and what he knew to be the ambulance. “Can I get you anything?” he asked.

Debra Hainsby shook her head. “Was your husband ill?” he asked.

Debra shook her head. “Never. He didn’t even get colds.” “Did heart attacks run in his family? They do in mine.”

“No,” she whispered. “Cancer, yes, but the Hainsbys all have strong hearts. What just happened?” she asked, wiping her eyes with a tissue. “He kept complaining of a raging thirst, and had me feel his forehead a few times. He was burning up.”

“We’ll know more soon,” Verlaque said. “Did he complain of anything else? A tightening of the chest? Or an aching sensation in his chest or arms?”

A friend of Debra’s approached them, putting her arms around her shoulders. “Let’s get you home,” she said.

“No, I want to go with the ambulance,” Debra replied, trying to get up.

Verlaque and the other woman helped her to her feet. “Debra, do you want me to go with you?” her friend asked.

Mme Hainsby shook her head. “No, thank you.”

Her friend turned to speak to someone else, and Debra took hold of Verlaque’s arm. “I wasn’t a good wife,” she said, barely audible.

Brooklyn Bad Boyz:
The Night I Was Shot 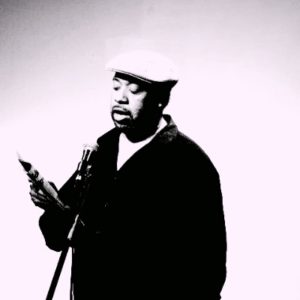 Brooklyn Bad Boyz:
The Night I Was Shot The rainy night I was shot three times often replays in my mind like a bad movie. It was November 16th, 2011, and I was standing...
© LitHub
Back to top