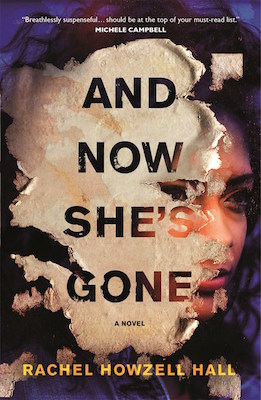 The following is an exclusive excerpt from And Now She’s Gone, by Rachel Howzell Hall. Grayson Sykes knows Isabel Lincoln has vanished. But she's not sure if it's on purpose, until she learns that Isabel has been keeping a big secret. And now she has to find her, before anyone else gets to her first.

Last year, a day before the Fourth of July, Ian and Isabel had a meet cute. She’d slipped in a puddle out in the UCLA Medical Center courtyard. He’d witnessed her fall from fifty yards away, ran to her rescue, and carried her to the emergency room to personally ensure she received immediate care. Two hours later, Ian had returned to his office with her phone number and Isabel had left the E.R. with a broken ankle protected by a soft cast. The next day, they grabbed a prepackaged picnic basket from a gourmet supermarket and headed to the Hollywood Bowl to watch fire- works. They kissed for the first time as canned Ray Charles sang about America, as fiery red, white, and blue pyrotechnic peonies burst in the skies above the city.

Ian O’Donnell shared this story with Gray as he escorted her to the main entrance. “Again: nice guy here.”

Gray said, “Aww, that’s sweet,” but she knew that if she typed “Boyfriend kills girlfriend neighbor says he’s nice” into any search engine, or “Husband kills wife neighbor calls him nice,” “Husband kills ex-wife neighbors thought he was nice,” or any combination of those words, she would get almost six million results. She’d get stories of police recovering handguns the nice guy had used; she’d read stories of paramedics pronouncing the woman’s death at the scene. That is, if the nice guy hadn’t buried her in a shallow grave, left her bundled in a blanket in the back seat of his truck, or dumped her in a bay, marina, or harbor to disappear her altogether.

If he hadn’t been a jerk, she would’ve been awed, but she wouldn’t ever be dumb.

Today. Because Gray had also stumbled through those heady romances with successful and beautiful men who knew just how successful and beautiful they were. She, too, had looked beyond their arrogance and casual disrespect because ohmigod, look at him; look at me riding in his Bimmer. She’d change him, love him enough so that he’d soften like butter. She’d be the diamond drill bit to his slab of marble. Alas, those successful, beautiful men had never changed. No—she’d changed, pushing away friends, pushing away gut feelings, pushing down tears, all to make him love her. He had been the diamond drill bit and she had been simple hardwood.

Eventually, she had wised up. And maybe so had Isabel Lincoln.

“We used to see each other for lunch every day,” Ian O’Donnell said now. “Before everything went wrong.”

“She works close then?” Gray asked.

“At the Alumni Center up on the main campus. She’s an alum. Class of 2009. Not me. I went to Brown for undergrad, then Har- vard Med, and now I’m here. Weather’s better in L.A. than Boston. Girls are prettier, too.” He chuckled. “Just kidding. Not kidding.”

Gray laughed for him.

She didn’t like Dr. Ian O’Donnell, and she hoped that Isabel had left a scorching review of him on Yelp before she disap- peared. “. . . and the tiny-dicked bastard hogged all the covers and ate his earwax.” But liking wasn’t a requirement of the job, especially since Rader Consulting’s business model was built on the backs of cheaters and scammers, hags and nags.

The doctor and the P.I. exited the medical office building and entered the bright outdoors with its thick, hills-on-fire air and flecked blue sky. One of Gray’s laparoscopic scars, left by her emergency appendectomy just six weeks before, burned and hissed beneath the waistband of her slacks, and she took a deep, cleansing breath of that tainted air.

“You know how to get to the Alumni Center from here?” Ian O’Donnell asked.

“If you don’t solve this thing by four today, I’ll meet you at Iz’s place at five. She told me about ‘C.P. time,’ so not five ten or five thirty. Five sharp. Don’t be late. Please.”

The nerves beneath Gray’s skin crackled. Isabel Lincoln had the nerve to discuss “Colored People Time” with Ian O’Donnell? And then, he dared to utter that shit . . . ?

Fifteen years ago, he’d be catching these hands. Alone again, Gray squeezed her eyes shut, waited for the pain in her middle to pass, and wished that she had completed her regimen of amoxicillin, then remembered that she carried in her purse the new refill of oxycodone that Dr. Messamer had prescribed for the pain.

She couldn’t find the oxycodone—she’d just picked it up from the pharmacy—but she did find a bottle of ibuprofen, 600 milli- grams. Good enough. She popped one giant pill dry and it scraped along her throat. It was bitter, but then, on days like today, so was she.

I need another pen. “You have to do better than this.”

She fumbled through her purse again. After finding an an- cient ballpoint coated in stickysomething and strands of hair, she sat on a nearby retaining wall and quickly transcribed her con- versation with her new client. Alas, she had only approximations for dates, since she couldn’t decipher the gouged scribbles made by the dry pens she’d used in Ian’s office.

Maybe she’d find Isabel Lincoln before having to rely on a timeline.

She winced, a little cranky, plenty sore, then plucked a small bottle of sanitizer from her battered handbag. As she rubbed gel into her hands, her phone buzzed.

A text message from Ian O’Donnell.

Just making sure you’re not lost.

“Seriously?” Gray texted back I’m good, and she started her trek to the Alumni Center.

Sure, he wanted to know that his girlfriend was okay—but was that out of love and concern? Or was it because she’d made him look bad? Because how dare she dump him? And how dare she steal his dog?

Gray remembered how Ian O’Donnell had strolled back into the hospital. Lady nurses had waved at him. Men in scrubs had nodded at him. He was the Man.

But did any of them know about Isabel?

The Evolution of Joe Lansdale's Hap and Leonard 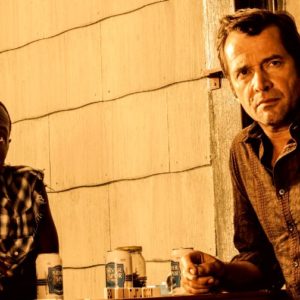