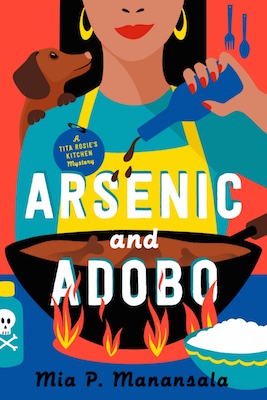 Along with today's excerpt, we're delighted to be premiering the cover for Arsenic and Adobo, by Mia P. Manansala and forthcoming from Berkley Books, an imprint of Penguin Random House. The first in the Tita Rosie's Kitchen mystery series, it's about a young woman named Lila Macapagal whose life feels rather like a romantic comedy. Until it turns into a murder mystery.

My name is Lila Macapagal and my life has become a rom-com cliché.

Not many romantic comedies feature an Asian-American lead (or dead bodies, but more on that later), but all the trademarks are there.

Girl from an improbably-named small town in the Midwest moves to the big city to make a name for herself and find love? Check.

Girl achieves these things only for world to come crashing down when she walks in on her fiancé getting down and dirty with their next-door neighbors (yes, plural)? Double check.

Girl then moves back home in disgrace and finds work reinvigorating her aunt’s failing business? Well now we’re up to a hat trick of clichés.

And to put the cherry on top, in the trope of all tropes, I even reconnected with my high school sweetheart after moving back to town and discovered the true meaning of Christmas.

OK, that last part is a joke, but I really did run into my high school sweetheart. Derek Winter, my first love.

Too bad he’d aged into a ridiculous jerk with a puffed up sense of importance and weird vendetta against my family. Pretty much tried to shut down my aunt’s restaurant on a weekly basis. Odd behavior from the guy who’d wanted to marry me right after graduating from high school, but what can I say? I had exceptionally bad taste when I was younger. You’re dumb when you’re fifteen and hopped up on hormones.

Hence me working at my Tita Rosie’s restaurant rather than running my own cafe, which is what I’d been going to school for before I found out Sam was a cheating scumbag. That was right around the time my aunt sent me a distress signal and here we are. So instead of grinding my own coffee beans or brewing the delightful loose leaf teas I’d sourced for my dream cafe in Chicago, I now spent every morning preparing mugs of Kopiko 3-in-1 in my hometown of Shady Palms, Illinois, over two hours outside the city.

And yes, the town really was named Shady Palms. Rumor has it, some rich dude from the Caribbean got homesick after moving to the area and tried transplanting a bunch of palm trees along the main street. Surprise surprise, they didn’t take, so he replaced them with tacky plastic replicas. Both the fake palms and the name stuck.

Anyway, the morning clientele at my tita’s restaurant always included a bevy of gossiping aunties, none as loud or nosy as the group of 50-something-year-old women I privately referred to as “the Calendar Crew.” Their names were April, Mae, and June—they weren’t related, but all three of them were completely interchangeable, down to their bad perms, love of floral patterns, and need to provide running commentary on my life.

It was their due—after all, they were my ninangs, or godmothers (yes, plural). My late mother’s best friends. They loved and cared about me.

In their own infuriating way. 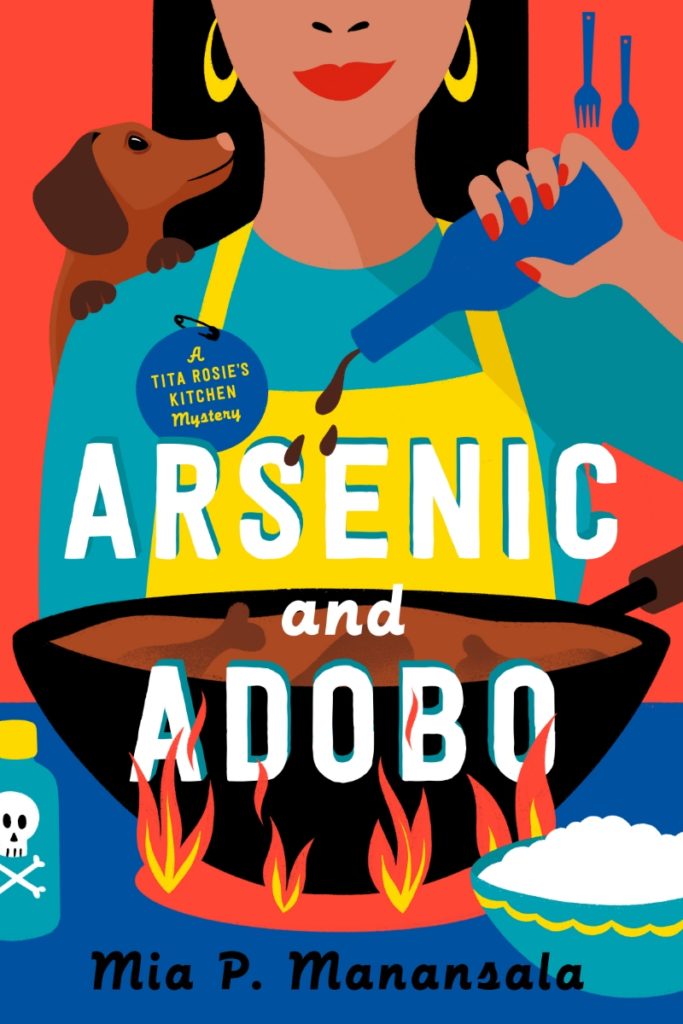 I brought over their morning plate of pandesal and they descended like a pack of locusts upon the dish of lightly sweetened Filipino bread, spreading the warm rolls with butter and dipping it in their coffee or drizzling it with condensed milk. And like locusts, once they were done devouring one thing, they moved as a pack onto their next victim: me.

“Lila, why’s everything you wear always dark? You look like a bruha.”

“And your hair’s always in that ponytail and hat. Not sexy.”

“Ay nako, what is this? You get bigger every time I see you!”

This last statement, accompanied by a firm pinch of my arm fat, was from Ninang April, who always had to have the final say. April always was the cruelest month.

I was used to these digs against my appearance—it was how older Asians showed affection. While I was no beauty queen (well, except for that one time, but that’s a story for another day), my tan skin glowed and my black hair was thick, shiny, and so straight you’d think I ironed it every morning. My pride and joy. Too bad I had to keep it under a baseball cap for work.

I could ignore my godmothers’ first two comments—while being told you looked like a witch would bother most people, I considered it a compliment. I loved natural remedies, dark color palettes, and made bewitchingly delicious baked goods, so I’d learned to lean into the “bruha” image. Everyone needed a personal brand.

As for the baseball cap, it’s not like I wore it as a fashion accessory. I worked in food service, and my family was a stickler for hygiene. It was either a cap or a hairnet, which thanks but no thanks.

My weight gain, however, was a sore topic. Bad enough that I’d been eating my feelings and couldn’t fit into my old clothes anymore, I didn’t need them rubbing it in. Then again, I hadn’t been home in almost three years. The recovering Catholic in me recognized that these barbs were just the beginning of the penance they would make me pay for being away so long.

I waved my hand dismissively. “Ay Ninang April, I’m just adjusting to being back home. You know everybody eats well when Tita Rosie is around.”

The Calendar Crew all nodded as they helped themselves to the coconut jam and salty white cheese, or kesong puti, I’d added to the table.

“Why do you think we come here all the time? The decor?” Ninang Mae asked, gesturing around at the scuffed tables, mismatched silverware, and appliances from the 80s. “Nobody cooks better than your Tita Rosie.”

A loud “Ha!” was the response to Ninang Mae’s comment. We all turned toward the source of this rudeness, and my stomach clenched as I locked eyes with the only man I hated as much as my ex-fiancé: Derek Winter.

Derek sipped at a travel cup of coffee and tapped his foot in a cartoonish show of impatience. “Hey, could I get a table already?”

My godmothers all clicked their tongues in unison and began whispering furiously in Tagalog as I approached him. “I thought I made it very clear you weren’t welcome here.”

His eyes crinkled in amusement—something I used to find so attractive. His charms were wasted on me now.

“Now Lila, is that any way to treat a customer?” the man behind him asked.

My eyes snapped to the newcomer—I hadn’t realized Derek was dining with a guest. He’d always eaten alone before. Supposedly, dining solo made it easier for him to focus on the food so he could write his “reviews.” I figured he just didn’t have any friends.

And even more surprising than the idea of someone willingly spending time with Derek was his companion. What was Derek doing with our landlord?

“What, a man can’t have brunch with his son?” He clapped Derek on the shoulder, who flinched. “I’ve owned this plaza for a while now, but I’ve never tried your aunt’s cooking. You missed another payment, so after seeing some of Derek’s reviews, I figured I’d come see what the problem was. See if I could offer any assistance.”

I narrowed my eyes at Derek. The problem, huh? And since when were these two related? As long as I’d known him, he didn’t have a dad. You’d think he would’ve told me his mom had remarried when we first saw each other again, but I guess this was just another of his “little omissions.”

Looking back and forth between the two, I couldn’t picture someone less likely to have sired him. Mr. Long was thin, wiry, and balding, with pale grey eyes and the red flush of the constant drinker. Derek, unfortunately, was still absolutely gorgeous, with wavy, sandy brown hair that matched his eyes perfectly, as well as the stocky build of a football player gone slightly to seed. The only thing they had in common, appearance-wise, was they were both white. Though Derek’s hair had thinned quite a bit over the last few months, so maybe he inherited the baldness? Guess I’d have to ask the auntie network about this later on.

Derek met my glare with a smirk and gestured toward his favorite table near the window. Honestly, how was it even possible to have a favorite table at a restaurant you allegedly despised?

“Of course, make yourselves comfortable.” I smiled sweetly and added, “But no outside food or drinks allowed.”

Derek rolled his eyes and started towards the door, but Mr. Long intercepted him. “Here son, why don’t you finish your drink and I’ll put the thermos in the car? I gotta call your mom real quick, so go ahead and order for me. I don’t know what any of this food is anyway.”

I waited till Derek gulped down his drink and handed over the travel cup before hurrying to the kitchen to talk to my aunt and grandmother. Those two coming here together—especially after our latest warning about being behind on rent again—could only mean one thing for us.

Five Psychological Thrillers You Should Read This September 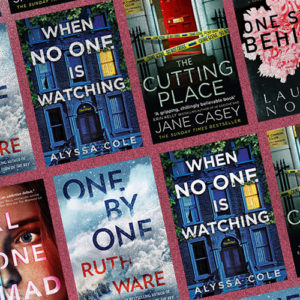 Five Psychological Thrillers You Should Read This September Readers, let’s be frank—or, more accurately, let me be frank. We are living in uncertain times. Things we took for granted...
© LitHub
Back to top