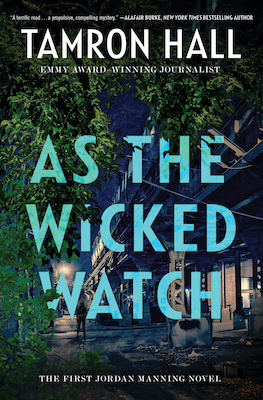 The following is an exclusive excerpt from As the Wicked Watch, by Tamron Hall. Jordan Manning, a brilliant Black journalist (who has a master’s degree in forensic science) is enraged when she learns about the murder of a young black girl. And so she decides to solve it.

“Jordan, we’re live in sixty,” said Tracy Klein, my favorite field producer, nudging me to get into place.

“Okay, hang on,” I said, distracted by a rush of butterflies and the sudden urge to pee, which happened every single time I was about to go on the air. I guess it was my body’s way of preparing me for the moment that never got old, but soon panic struck. My earpiece was in, but the anchors’ voices sounded like Charlie Brown’s parents.

“Hey, you guys. I can’t hear. You’re not coming through very clearly. The echo is killing me,” I said.

In an instant, the sky darkened over historic Bronzeville on Chicago’s South Side, a sign of the dip in temperatures I recalled hearing on this morning’s weather forecast. Chicagoans and people all across this state have to deal with one inescapable fact, and that’s the cold. Sure, I’d heard people who claimed to love the change of seasons. But to a person from Austin, Texas, that sounded like a case of Stockholm syndrome. Or at least that’s what I told my friends from the Midwest when they tried to convince me otherwise.

“Guys, are you trying to blow my ears out?” I shouted at the men a few feet away in the news van. Clearly, whatever they did had fixed the problem. The sound coming out of my earpiece could now be heard in the next county. I stretched as far as my arms could go in this super cute, single-button fitted jacket that looked tailored but wasn’t—I’d bought it off the rack—and turned down the literal voices in my head.

“Tracy, when are we getting new equipment? This earpiece was around when . . .”

“Jordan, focus,” she interrupted. I could tell Tracy wasn’t in the mood for my climbing up on my soapbox today. I glanced down and noticed the heels of my most expensive pair of pumps had slowly disappeared into the soft soil beneath the “L” train track. The low-lying area was prone to flashflooding, and my poor shoes were the latest casualty.

What was I thinking?

Scott Newell hoisted the camera off the static tripod and steadied it against his right shoulder. He signaled all good with a left-handed thumbs-up.

So long as Scott’s sound is working, I’ll be okay.

Scott is my steady hand and the antidote to my impulsive nature. My voice of reason out in these streets. The irony of us falling into stereotypical gender roles was particularly strange in a business where independent, successful women still kept secrets about gender bias and sexual harassment while reporting on these very matters. But I guess it didn’t hurt that he had a smile that had melted a few women and, heck, some men, too, when I’d tried to negotiate a longer interview with an unwilling participant.

For that, Scott is my favorite cameraman, but also because he has steady hands and one of the best points of view behind a lens I’ve ever seen. And he’s reliable—probably one of the most reliable men in my life right now, to tell the truth. In television, allies are everything, and for reporters, the natural first ally when you arrive at a new station is the cameraperson. A unique trust developed quickly with long hours on the road, especially on those occasions when we had to chase down some guy accused of foul play in his wife’s disappearance—in my case in heels. You need someone willing to drag you along like those poor women in the campy horror films who’d break a heel and fall just as the killer closed in on them with a chainsaw. Leave no screaming injured woman behind due to her poor choice of footwear. That’s Scott.

“Thirty seconds, Jordan.” The voice in the earpiece had reverted back to a whisper.

“I don’t know what it is, Scott, but my sound is terrible. Can you hear me?”

Scott shrugged his shoulders, not worried that I was seconds from being one of those reporters pressing against their ear, yelling, “Can you repeat the question?”

If the sound issues weren’t enough to make me want to run into the liquor store a few yards away and drown my nerves, the clouds had assumed the starting position and were waiting for a checkered flag. Hanging low and dense like an alien invader, they made Bronzeville appear more sinister than necessary. “Sketchy,” as my mother would say: with vacant lots, boarded-up retail shops and liquor lounges, and potholes the size of a kiddie pool.

The wind gusts this city is famous for sprayed a mix of prickly dirt, gravel, and rock against my bare legs. I could feel a few of the pebbles land inside the arches of my black Stuart Weitzman pumps, a splurge I permitted myself for my twenty- eighth birthday, now likely the dumbest purchase of my life but still one of the cutest. I could hear the words of assistant news editor and my newsroom BFF Ellen Holbrook come back to haunt me.

“I’m just saying, if it were me, I wouldn’t wear my four-hundred-dollar Stuart’s—not today, not where you’re going. Oh, that’s right, I don’t own any,” Ellen quipped, exposing a hint of the East Coast accent she picked up during summers spent with her grandparents in Menemsha, Massachusetts, a small fishing village on Martha’s Vineyard where everybody sounds like a Kennedy.

The wind whipped the air like a strap, and discarded hand- bills, plastic bags, and food wrappers were violently sucked into the honeycomb cells of the chain link fence surrounding the abandoned playground. Divided between areas for toddlers and for big kids, it was named in honor of Ida B. Wells-Barnett, a Black investigative journalist and a total badass in her day. I wonder if she would have done a show like 60 Minutes or Date- line.

It’s amazing where the mind travels at a crime scene. I’m convinced it’s how the brain copes with the sick reality of what humans are capable of.

The playground was wholly unrecognizable from its condition just a few weeks ago when Scott and I were the first to arrive at the scene. The city has since rid the cracked concrete slab and the adjacent grassy field of trash, dandelions, and what we back in Texas call horseweed or marestail, which grows more than six feet tall. When I was a child, I used to visit my cousins on my mother’s side in Galveston, Texas. A lot of time was spent running in and around the weeds. It was funny how different they looked erupting from the concrete jungle versus the soft soil beneath a Texas sun, as statuesque as pine trees. The bark was so thick that if you cut it, some inexplicable white liquid would’ve probably squirted out. My lack of appreciation for it all was lost in my understanding of why curious pre- pubescent boys would be drawn to a place that so effectively cloaked their mischief as they pored over their discoveries.

That it once was a children’s play area named after a Black woman who paved the way for people like me to work as investigative journalists only made its fate that much more of a shame.

“Okay, Jordan,” Scott said. “The desk is about to hand it offfff!”

He pointed and mouthed Go, as if a Hollywood director had burst onto the scene. His over-the-top cue nearly made me laugh. I took a deep breath, fighting the visual of his absurd gesturing, and refocused on why I was here in the first place.

“Diana, I’m at the Ida B. Wells-Barnett playground at 45th and Calumet in Bronzeville. It’s been weeks since a crew of prisoners from Cook County Jail on cleanup detail made a gruesome discovery here. Now investigators believe they’ve established a connection between the body of an African American woman found behind a dumpster at a popular South Side restaurant last week and the victim found here.”

Other news media had referred to this latest victim as a prostitute. I didn’t have the heart to describe her that way after speaking with her mother. She was somebody’s child. Labels give people a reason not to care when aired out on the news. A murder? Oh, she was just a prostitute. A victim? Police said she was on drugs. As the forty-five-second clip of my prerecorded interview with the victim’s mother played, I thought about her face, hardened by heartbreak long before her daughter was found dead and partially burned outside a dumpster. Trust me, there was no describing the look. You knew it when you saw it watching from your sofa as the local news camera moved in on a heartbroken helpless parent.

“Powerful clip!” chimed in midday anchor Diana Sorano, her genuine enthusiasm making her more audible than I’d anticipated. The wind whipped my hair across my face, and in the moist air, my face morphed from dewy but tolerable into a sweaty mess likely to spark a viewer complaint that I looked too shiny. The first raindrop splashed across my nose. I tried not to frown, but felt my eyebrows furrow, a bad habit.

“Jordan, with yet another murder of a young African American woman, what are some of the community leaders saying? Are they questioning how police are handling these cases?”

Did she lob that question at me to get me to state the obvious? That people had doubts that the police would use all the resources available to draw a connection between these two homicides, if there was one? Or was she oblivious? Of course people were asking that question. Wouldn’t you if you lived here?

“Diana, there is a growing wave of discontent over the number of unsolved murders of Black women on the South and West Sides. Now, with the murder of Tania Mosley, that number stands at eight over the last two years.”

“Thank you, Jordan, and again, I look forward to your special report, which airs tonight during the ten o’clock broadcast, with Tania’s mom.”

I wondered whether Diana fully understood what this latest murder meant. Would she be looking forward to a special re- port about White girls being killed? My thoughts went dark, realizing my snap judgment was unfair. She wasn’t looking forward to a report on anyone’s being killed, no matter their race. It was just that scripted language trap many anchors tended to fall into after years of seeing the same kind of story over and over again. In a few seconds, this story would vanish and the commercial break would act as a palate cleanser until the next funny video everyone was talking about or the comforting kicker about someone or some company doing a good thing. From confronting you with a murder to making you feel motivated in twenty-five minutes or less.

“She looks like a fighter,” Diana said. “My heart goes out to her. I hope she has someone to lean on for support.”

It started to rain lightly, but I was frozen in place, eyes locked on the camera as I waited to hear all clear from Scott.

Scott broke down his tripod and was halfway to the news truck by the time I pried my shoes out of the mud that now encased them, and the sky burst like a thumped piñata. 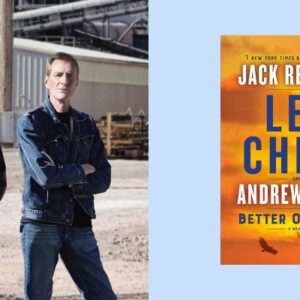 Lee Child and Andrew Child on Border Towns, Villains, and the New Jack Reacher Novel The latest Jack Reacher novel begins just as you would wish it to: Reacher, walking west through the desert, no particular...
© LitHub
Back to top