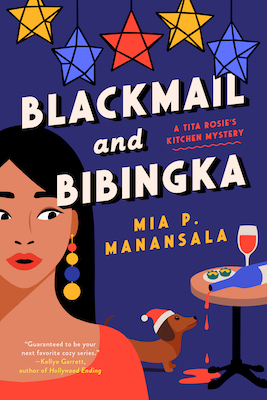 We are thrilled to reveal the cover to Mia P. Manansala's new novel, the next installment of her "Tita Rosie's Kitchen Mysteries" series: Blackmail and Bibingka. Read on for an exclusive excerpt!

“Adeena, can you please shut that off? If I have to listen to that Mariah Carey song one more time . . .”

I scratched out the third mistake I’d made while trying to finalize the menu for the annual Shady Palms Winter Bash. It tied with the Founder’s Day Celebration as the biggest event in my tiny town of Shady Palms, Illinois (population: 18,751), and this was the first year my business—my dream—the Brew-ha Cafe, would be participating. Considering what a mess the Founder’s Day Celebration had turned out to be, I really needed to wow at this party. Despite obsessing over it for the past month, I had less than two weeks till the big bash and hadn’t finalized anything.

My best friend and business partner, Adeena Awan, turned the cafe’s speaker system down to a decibel that didn’t make my ears bleed. “Way to be a humbug, Lila. Ms. Mariah cannot and will not be silenced. Her lambs will make sure of it.” 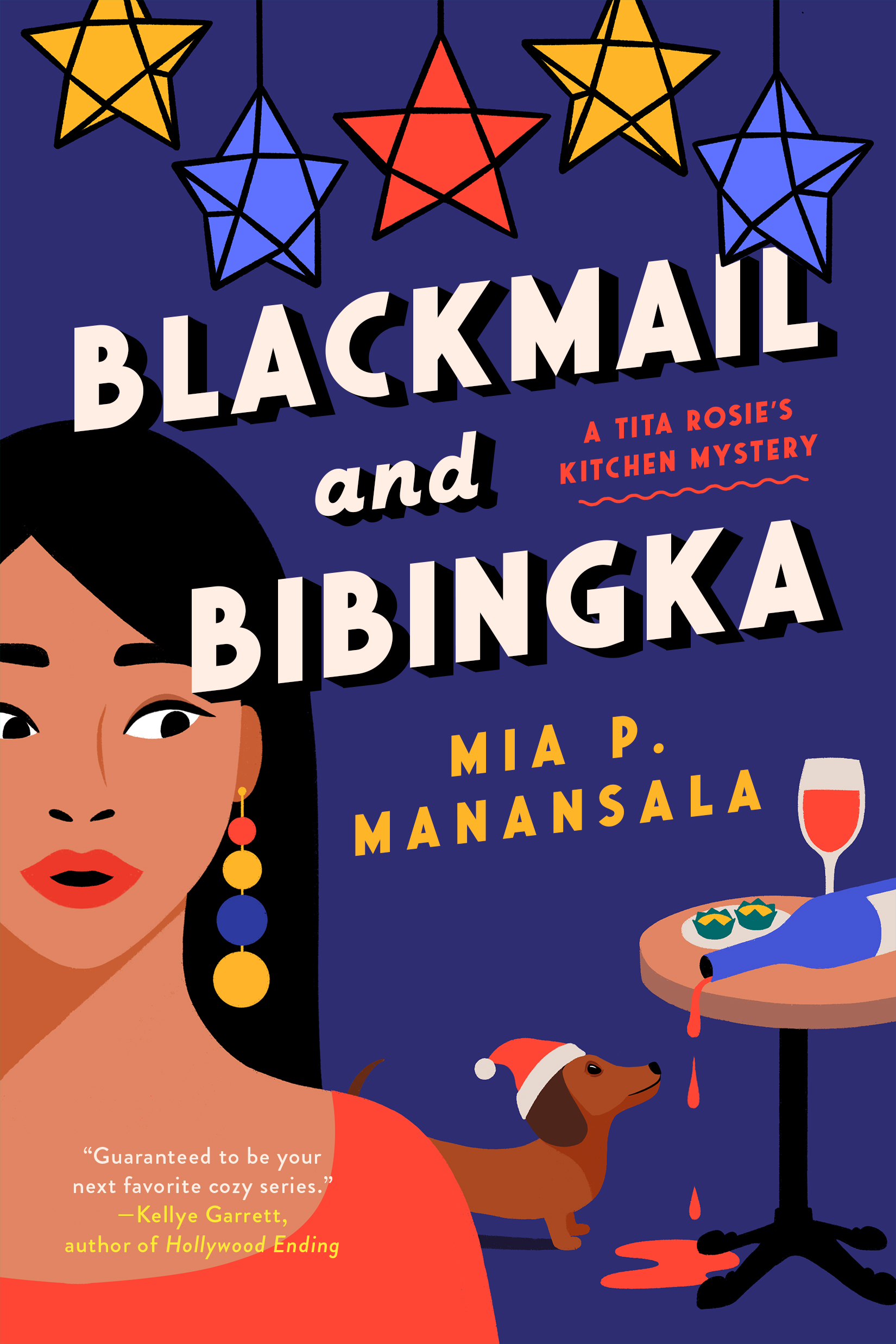 “Hon, you don’t even celebrate Christmas. Why do you have all of these?” Elena Torres, Adeena’s girlfriend and the third and final member of the Brew-ha Cafe crew (aka our voice of reason), scrolled through the cafe’s playlist on Adeena’s laptop. It currently had no fewer than ten Christmas music compilations that she’d had on repeat since December 1. It was only December 4, and I was ready to ban her from programming the shop’s playlists ever again.

Elena raised her eyebrows at the mix of both religious and secular Christmas songs. “Were you secretly raised in an intensely Catholic family like Lila and me? Because this is a lot.”

Adeena laughed and handed Elena her morning cup of yerba buena tea. “No, I just like the music. It started as me being rebellious as a kid. Well, as rebellious as you could be in my house. You didn’t grow up here, but Shady Palms has a pretty big Muslim and Jewish population, so it was easy to keep Christmas out of schools. But there were still all the commercials and Christmas specials on TV, so I got kind of obsessed with the holiday. I’m mostly over it now, but I still love the music and movies. And also the parties because Lila’s family goes all in on the holiday.”

Despite my “humbug” response, as Adeena put it, I really did love the holidays. The food, the parties, the gifts, the karaoke, the fantastically cheesy and comfortingly predictable holiday romance movies . . . what wasn’t to love? I mean, I wasn’t like the rest of my family, who used to put up Christmas decorations in September (something about the Christmas season starting in the -ber months) until I convinced them to at least wait till the day after Thanksgiving, but I already had a Google spreadsheet prepared for all the holiday movies the Brew-has and I were going to watch, and had no fewer than ten cookie recipes I wanted to test. There’s a reason it was taking me so long to finalize things for the winter bash.

However, I was finding it hard to get into the holiday spirit ever since my long-lost cousin Ronnie came back into our lives a few days ago. Fifteen years of nothing, only for the prodigal son to show up on our doorstep like nothing had happened, saying he’d bought a winery just outside of town and would be staying in Shady Palms for the foreseeable future.

“Overjoyed” would be an understatement regarding Tita Rosie’s reaction to seeing her only child for the first time in over a decade. If she wasn’t filling his plate with third and fourth helpings, she was touching his face and fighting off tears, as if she couldn’t believe he was real.

I couldn’t believe it, either.
Considering everything he put her through, the kindest thing he did for our family was leave, just like his father had before him.

“Let them go,” Lola Flor had muttered when I was a kid, as we watched first Tito Jeff and then (a few years later) Ronnie abandon us, Tita Rosie sobbing alone in her room each time. “The Macapagal women will do just fine without them.”

My grandmother had been right. Maybe it had taken a while, but the Macapagal women thrived without them. Tita Rosie’s Kitchen, our family restaurant, sat right next door to the Brew-ha Cafe and was now doing so well that people from all over the Midwest came down to Shady Palms just to enjoy my family’s food. That’s right, our hole-in-the-wall restaurant was now a tourist destination. Thanks to that, we finally had enough money to hire outside help and, get this, my aunt and grandmother could actually take a whole entire day off.

My beloved Brew-ha Cafe wasn’t quite there yet, but it was still on track to turn a profit within the next year or so. We had a rough start back in the summer, but thanks to Adeena’s barista skills, my baking wizardry, and Elena’s plant witchery, we’d started to establish ourselves as the hang-out spot for the below-forty crowd. We also appealed to anyone who appreciated quality drinks, Filipino-inspired bakes, and an array of plants and organic bath and beauty products.

As I doodled in the edges of my notebook, trying to figure out what was easy to bake in bulk yet still had enough pizzazz to draw a crowd among the twenty or so tables and stalls that would be at the winter bash, Adeena came over with a tray holding three small cups filled with a creamy concoction dusted with cinnamon.

“Tasting time!” she said. “This is the atole recipe I plan on serving at the big bash. Elena’s mom gave me the recipe and I added my own tweaks. What do you think?”

I picked up a cup and took a big sniff, little curls of steam enveloping my face. Along with the cinnamon, I detected a touch of vanilla and a faint scent that I couldn’t immediately place until I took a small sip.

“Corn! Is this thickened with masa harina?” I asked.

Elena nodded. “Yup! It’s pretty typical for breakfast, especially around Christmastime. I’d asked Adeena to make champurrado, the chocolate version, but she said there was also a Filipino dish called champorado that was rice-based, and we didn’t want the customers to get confused.”

“Aww, that’s sweet. And a good idea, since I think my family will be serving champorado at the big bash. I love this, Adeena! Are we all set with the beverages?”

“Think so. There’s Elena’s atole, my chai, and of course the house blend with bags of my hand-roasted coffee beans to sell alongside it. You sure you don’t want to include one of your drinks?”

“Three is plenty. Our table’s kind of small, so I want to make sure we have enough space for everything.” I looked down at my winter bash planning list and scribbled down Adeena’s contribution before checking her off my list. “What about you, Elena?”

She was reeling off the inventory of potted plants, herbs, and other products she’d set aside for the party when the bells above the door tinkled, announcing our visitor: my cousin Ronnie. He was barely average height and had a slight build, but the way he held himself made it seem like he filled the entryway. That air of confidence, plus his carefully styled wavy black hair, golden brown skin, and cocky grin had led to more than one Shady Palms mom showing up on our doorstep, screaming at Tita Rosie because he’d broken another girl’s heart—most notably my cousin Bernadette (not a blood relation, don’t worry, just a very close family friend). If I was annoyed by Ronnie’s return, Bernadette was livid. She hadn’t stopped by the restaurant or cafe since he’d arrived, and I missed her.

That coupled with the old feelings of resentment that always bubbled at the surface whenever I thought of him, and my anxiety about preparing for the holiday party made my voice come out sharper than I’d meant. “What are you doing here?”

The grin didn’t leave his face. He was way too smiley for seven in the morning—I didn’t trust anyone who smiled that much before the sun had fully risen yet.

“Good morning to you too, Cuz. And to you, Adeena.” He nodded at her before turning his attention to Elena. “Sorry, we haven’t met yet. I’m Ronnie Flores, Lila’s cousin.”

Elena shook his hand. “I thought you were Auntie Rosie’s son? Your last names are different.”

His smile flickered for a moment before going back to its usual brilliance. “Yeah, it’s my dad’s last name. My mom went back to her maiden name after he left. Can’t blame her.”

“Ronnie, what do you want? If you haven’t noticed, we were in the middle of a meeting.”

He had the grace to glance guiltily at the table strewn with our meeting notes. “Sorry about that. I just came over because Lola Flor said it’s breakfast time. She wants you all to come over. Plus I have something for you all.”

“What is it?” Not that I wanted anything from him. But the idea of him giving us something when all he’d ever done was take roused my curiosity.

“Guess you’ll have to join us for breakfast to find out.” He winked at the girls, who gave him grudging smiles.

I couldn’t ignore a breakfast summons from our grandmother, but something held me in place. Since he’d arrived, I’d done my best to avoid him. I’d had more than my share of trouble this year, and being around Ronnie would increase the chances of more drama a billion times over.

He noticed my hesitation. “Mommy would love it if you could all eat with us.”

I sighed. This man was playing dirty and he knew it. You couldn’t say no to anything that would make Tita Rosie happy. Not unless you were a monster, anyway. It’s just breakfast, I told myself. Nothing bad ever happened over breakfast, right? 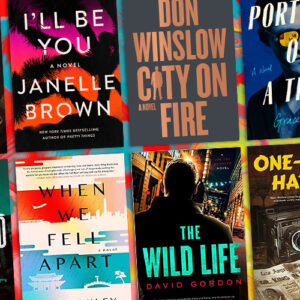 10 New Novels You Should Read This Month: April 2022 Each month the CrimeReads editors make their selections for the best upcoming fiction in crime, mystery, and thrillers. * Alma...
© LitHub
Back to top