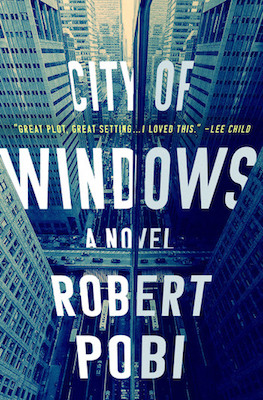 The following is an exclusive excerpt from City of Windows, by Robert Pobi. An FBI agent is riding in an SUV in NYC during a torrential snowstorm when he is killed by a perfect sniper shot. The blizzard destroys all evidence, and the authorities turn ex-agent Lucas Page, a disabled college professor and former crack investigator—who doesn’t want to return to the crime world, but will do it, because its his former partner who has been killed. But he doesn’t have much time before the trail runs cold.

Lucas stood on Forty-second in the shadow of the Park Avenue Viaduct with the vector printouts. They were laminated and organized in a one-inch binder with the bureau’s logo embossed on it. All neat and tidy and waiting for him when Kehoe’s SUV came to a stop out-side the big Blue Bird command vehicle parked at the scene. They were also very much useless.

Forty-second was closed in both directions, and Park had been shut three blocks south, tying traffic into a knot usually reserved for July. The street was upholstered in NYPD cruisers and FBI SUVs, the flashing lights bouncing off the snow and concrete and glass, giving the whole show a netherworldly disco effect.

It was freezing, and the wind funneled between the buildings, riding up Park Avenue and stirring up snow devils that at any other time would have been beautiful. The asphalt was covered in a dirty frozen crust that crunched like potato chips, and Lucas had trouble negotiating the uneven footing. His ankle always stiffened up in low temperatures. The prosthetic itself was mostly aluminum, but the joint pins were stainless steel and some of the other hardware was titanium or carbon fiber, and each alloy contracted at a different rate, which hampered mobility. To compensate, he added a hop to his good leg, giving his gait an idiosyncratic signature in the cold.

When they arrived on-site, Lucas asked about the food chain, and Kehoe pointed to a large crucifix of a figure near the evidence tent that he recognized as the unmistakable form of Grover Graves. He and Lucas had never hit it off, one of those bad chemistry dislikes that all the handshakes, smiles, and best intentions couldn’t overcome. Graves was also the single known exception to Kehoe’s rule of using only the best people, and having him in charge of a case of this import didn’t feel like one of his moves.

After Lucas and Graves nodded hellos from opposite sides of the street, Kehoe told Lucas that Hartke had been working under Graves for the past few years, a detail that surprised him. Hartke had hated stupid almost as much as Lucas did, and Lucas couldn’t see the man taking orders from Graves, no matter what the situation. But it was a possible explanation as to why Kehoe had Graves leading the investigation—it was making him take responsibility for his own people.

But Lucas wouldn’t have to work with Graves. Or Kehoe. He was here as a favor to his old partner. Hartke was a lot of things, some of them not very pretty, but he had been a friend. Which meant that Lucas owed him. So here he was. Standing out in the street and waiting to slip into character.

The two agents Kehoe had sent with him were hanging back, near the corner, eyeing him with the preprogrammed disinterest of their kind. One of them was a typical bureau type who looked like he had been pulled from central casting—forgettable and bland; the other was a black chick who moved with the slow, deliberate patience of a badass. They were both quiet and professional, and they stayed out of his way.

After a few seconds of taking in the topography, he realized that he had moved behind a lamppost, which meant that his operating system was updating automatically. It was amazing how fast that kind of thinking became instinctive—and even more amazing how long it lingered after it was no longer necessary, like some phantom limb. After the hospitals and operations and rehabilitation and nightmares, it had taken him almost a full year to be able to walk through a crowd. It took time, but the fear had slowly dispersed into the ether. Until now.

But a little caution out here wasn’t just smart, it was essential; when put into perspective, nothing was worse than hunting a man with a rifle in a city of windows.

“Fuck it,” he said at church volume, and stepped into the intersection.

The victim—his former partner and onetime friend—still sat in his car. The vehicle was hidden from the world by a crime-scene tent, but Kehoe had walked him through, and Lucas would not forget what Hartke looked like. Taking the top off a human skull released a fountain of blood operating at 1.5 pounds per square inch with a reservoir of nearly two gallons. In an enclosed area like a car, that translated to enough bad dreams to last a lifetime. And Lucas already had a pretty good collection of those.

He hadn’t sat down with Hartke in three years, but they’d exchanged Christmas cards and the occasional email, all embellished with the threat of visits that rarely materialized. Lucas couldn’t blame the man; what had happened to him was simply too much of a reminder about just how wrong things could go in this line of work. And law enforcement people, especially old-schoolers like Hartke, were notoriously superstitious—even if he would never admit it, some part of his reptilian brain had to be worried that Lucas’s luck might be retroactively contagious. So Lucas never held it against him. He sighted up the street and took a deep breath, pushing the weather and the flashing lights and the army of men in blue and the giant Christmas ornaments and the tent hiding his dead former partner away.

Did he still have it in him? After all, if what everyone said was true, he couldn’t really do the things he claimed. Not with a human brain.

Did he still have it in him? After all, if what everyone said was true, he couldn’t really do the things he claimed. Not with a human brain.

There was only one way to find out. So he closed his eyes and waited for it to begin.

He thought about what he had seen back in the evidence tent. About the shattered car window and his friend’s shoveled-out brain. About the dashcam footage Kehoe had shown him and that four-second window framing the round that had come screaming in. About where he was and why he had agreed to come.

Then he opened his eyes, and the world slipped into context. Instantly.

And the street came to life in a way he hadn’t seen in so long it felt like he had entered someone else’s hallucination.

The world was suddenly reduced to an intricate geometry.

The smaller components of the city took on values—the bricks and blocks of stone becoming units of measure. These units connected to the larger planes—the windows and doors and lampposts—which in turn displayed their own numerical meaning, each relative to the others, and suddenly everything was one, and the city became a matrix of interconnected digits, a mosaic of numbers that stretched to the horizon.

Lucas stood in the intersection, lifted his arms, and slowly rotated in place, absorbing the city in a numerical panorama that pulsed and danced and flashed through his head. He took in the numbers around him, feeding the data into a series of instinctive algorithms that even he did not understand. It was an immediate process, fired up with an automaticity he could not explain. It was like being at the center of a vortex, and the lines of code carpeting the landscape swirled around him at a speed too fast to absorb in any conscious way.

By the time he had completed a single rotation, he could no longer see the buildings or sidewalks or police cruisers or flashing lights. He forgot the cop cars lining the street and the men and women in blue parading up and down the snow-covered pavement. All he saw, all he was able to relate to, were the numbers.

Everywhere. Representing everything. And then.

He blinked and the circus shut down. All of it—the numbers, the geometry, the distances. All that was left was a frigid winter scene with too many cop cars and not enough traffic.

Lucas sighted down Park Avenue, and his mind connected the components. He no longer heard the honking of rerouted traffic, felt the mother-in-law’s kiss of winter chill, or squinted into the snow coming down. All he could do was stare at the spindle of brick rising out of the earth like Kong’s mountain home. It was the only building on the avenue that had been designed on a cant, its orientation offset by a ninety-degree twist. One of its corners reached out, towering over Park. It was 772 yards from the point of impact, give or take a handful of inches.

He turned to the woman. “What’s your name?”

“Whitaker,” she said, her friendly tone in direct contrast to her badass impression. The only visible features were her teeth hidden in the shadow of the FBI hood.

“Whitaker, tell Kehoe I know where the shot came from.”

Lucas nodded at what he knew was a building in the distance but had turned back into a series of geometrical planes connected to the rest of the city by numbers. He raised his aluminum hand and pointed at the tower. “The roof of number 3 Park Avenue.”

Boston True Crime Through the Decades 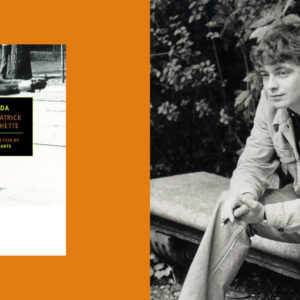