City on the Edge 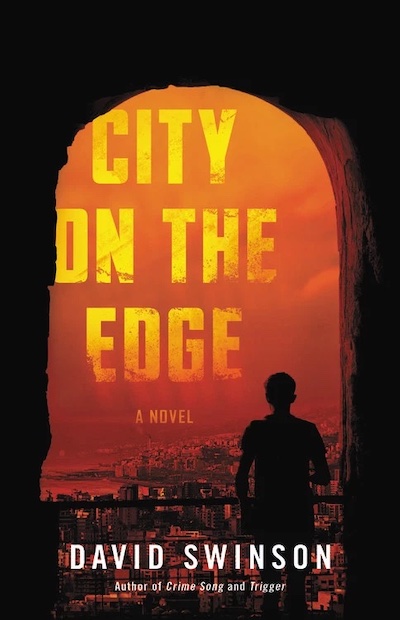 The following is an exclusive excerpt from City on the Edge, by David Swinson. It's 1972. Following a strange tragedy, 13-year-old Graham moves with his family to Beirut, Lebanon, which is in the middle of political turmoil. Graham suspects his father is actually a CIA operative, but he's not prepared for what will really happen that summer.

It was painstaking work, creating that fort out of a large thicket at the bottom of the hill. The opening was small and cut through the side so it couldn’t be spotted by anyone who might wander by. A tall cinder-block wall, about ten feet in height, stood a few feet in front and stretched across part of the bottom of the hill and down the road toward the Corniche. It surrounded an old, abandoned peppermint-stick lighthouse. The wall made for good cover and didn’t restrict our view to the other side of the hill and down the same road to our apartment building, which was a couple of blocks up from the Corniche, and the Mediterranean Sea.

The fort became our hideaway. We named it Chameleon Fort because a three-horned chameleon made its home in a tree that had twisted limbs bending over the top of the thicket. In retrospect, it should have had a name having to do with scorpions, spiders, or vipers. We used large sticks to swish and bang the ground on the inside to clear out as many of the creatures as we could. A lot more dangerous than expected to build that fort, but at the end, well worth the trouble. We were blinded to all the danger. Don’t know if it was stupidity or just youthful naivete.

Roddy and I spent most of our time at Chameleon Fort during the curfew. What else was there to do? No school. We were restricted, and not allowed to leave the building. But there we were. Our dads were never around, and I could only speak for my mother, not Roddy’s. She was always at the apartment of a friend or in her closed bedroom, drinking and smoking cigs. Micheline—our housekeeper, cook, nanny, sometimes friend—was easy. Snuck right by her. Never a problem, and even if she did catch me, I knew she would have backed me up. So, Roddy and I would meet on the ground floor in the garage area, then stealthily make our way to the fort.

We had binoculars and peered out the side entrance to focus down the road toward our apartment building and the Druze village to the right of it. Sometimes we imagined we were at war with the Druze and had to gather intel based on our surveillance; when the old woman came out to dump the bucket of dirty water in the gutter; when the young man tended to the goats, or when the little girls were playing chase on the pavement in the front area of our building. Our true enemy was Toufique, always shadowboxing in the late afternoon when the sun was high. He wasn’t with the Druze, though. His grandfather, Abu Fouad, managed our building and owned the small convenience store on the ground floor by the road.

There were about fifty Druze of all ages living in homes made of tin and stone and found wood. We knew their routines well. We knew our apartment building well. All ten floors. I lived on the eighth floor and Roddy on the fourth. We set our sights on those who lived in our building sometimes. On occasion we’d get lucky and spot a woman coming out in a bikini or even topless to bathe in the sun. We’d chuckle, but back then our twelve-year-old bodies did not respond the way twelve-year-old boys would nowadays. It was a different time, and we were just silly boys caught up in a grand adventure. We knew right from wrong but told ourselves this was okay because it was war. A kind of war. Our private war.

One late afternoon I was at the fort alone, spying. I had to be back for dinner soon, and on that day, I was supposed to be at Roddy’s apartment, so I had to get back before the call to dinner. Couldn’t take a chance Micheline (or worse, my mother) would call the Stankeys.

Just as I was gathering my stuff and about to leave, I heard rustling coming from the area of the road near the cinderblock wall. I peeked through the opening but couldn’t make them out. They were too close to the part of the wall that led down the road.

They stopped at the bottom of the hill, to my left and only a couple of feet from the fort. They became a little clearer as I peeked through a narrow separation of the vines, but only from their chests down. One of the men had his back toward me, the other facing him. The man with his back toward me was dressed in dirty white baggy pants and a long-sleeved white shirt. The other wore clean khakis. I couldn’t see anything else. The man in the khakis had an aggressive tone. He spoke in the broken Arabic of an American or Brit. His hands were of a light complexion, not like the man with his back toward me. The back of the other man’s right hand was darker. His Arabic was fluent, like he was born to the language.

The man with his back toward me repeated la, la, several times, which I understood to mean no. He sounded defensive.

Out of nowhere, the man who was facing me leaned into the other with force. I noticed his right hand strike the man in the chest. Sounded like a hard punch. The sound the other man made was one I’ll never forget. Like something more than getting the wind knocked out of you after a sucker punch. More like something confined for years finally escaping.

He lost his feet from under him and fell, his face inches from my position. He had a thick black beard and square-rimmed glasses. I recognized him.

His glassy eyes open wide. Does he see me?

He gurgled several words and released a breath like a long sigh. Blood from the corner of his mouth bubbled out and quietly burst to something like a teardrop that streamed down to get caught up in his beard.

The murder of the Middle Eastern man was the first homicide I ever witnessed. I still consider him my first body, because you never forget the first one. There would be plenty more to come in my future, but nothing like that time in 1973, in Beirut, Lebanon—and watching it happen.

It was fall of 1971 when Dad requested the post in Beirut. We were settled in Arlington, Virginia, having spent four years in Mexico City. I was certain, even at that young age, that his decision to go back overseas was so that he could distance our family from the city where my sister, Dani, had died over six months ago. Unlike my totally transparent mother, the signs of something like grief or depression in Dad were stet never made obvious. Yes, it was difficult to see my mother go through that. I believed the move was more for her benefit. Tommy was three years younger than me. He felt great sadness but got over it. I did too, but not as fast as him.

My mother kept herself in her bedroom, drinking vodka, smoking cigarettes, and watching the portable television. Sometimes all day and night. At that point, totally incapable of looking after me and Tommy. Dad took leave before he had to go. He was a Foreign Service Officer with the State Department. Taking leave seemed to settle things, enough so that he felt comfortable with the decision.

Mother, Tommy, my bull mastiff Buster, and I were moved to a hotel in DC when Dad left for Beirut in the spring of 1972. All the furniture and our belongings were packed by movers and shipped. Everything I owned, aside from what I had in my suitcase, which wasn’t much. He even took the necklace I’d been wearing for over a year from me. It had the Star of David attached to it. Mother gave it to me because of her Jewish heritage. She said that it was important that I know her family’s heritage, and that the necklace would be a positive reminder.

I had a hard time with having to take it off. It’s one of the only things Mother gave me that meant something. Family history or some shit like that.

“I’ll keep it safe until we return to the States,” Dad said.

“Because we’re going to be guests in another country. It’s a country where the people won’t appreciate this symbol on your necklace, worn around your neck.”

“I’ll keep it tucked in my shirt.”

“It doesn’t have to make sense. We have to respect that.”

“Mom said it’s important because it’s a part of our heritage.”

“That’s fine. You can wear it when we get back.”

“Mom told me I’m Jewish because she is.”

“You’re a damn Presbyterian, Graham. Now hand over the necklace.”

I unlatched it from around my neck and handed it over to him, but not without throwing him a look like I’d struck out on the third pitch.

He cupped it in his hand and walked away without another word.

Whatever Happened to Elise De Viane? On The Mystery Woman in Dashiell Hammett’s 1931 Sexual Assault Case 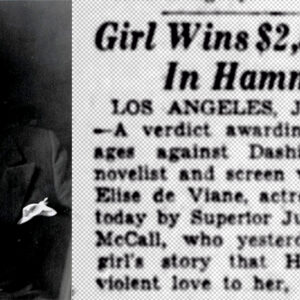 Whatever Happened to Elise De Viane? On The Mystery Woman in Dashiell Hammett’s 1931 Sexual Assault Case A plague on these women who, lengthily wooed, Are not to be won until one's out of the mood. And who then discerning one's...
© LitHub
Back to top