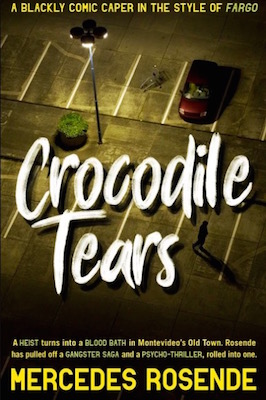 The following is an exclusive excerpt from Crocodile Tears, by Mercedes Rosende and translated by Tim Gutteridge. Diego is in prison on a kidnapping charge when his wily lawyer, Antinucci, secures his release. But it's in exchange for assisting a dangerous psychopathic criminal known as "the Hobo" in an armored car robbery.

In prison, everything is dense. Everything makes his heart pound and fills him with claustrophobia and it’s not difficult to understand why they call this place the tomb: dirty corridors where smells intermingle, huge dark rooms furnished with a few wobbly chairs and scabby tables, photos of naked girls tacked to the crumbling walls, and that clammy cold that sticks to the body, filling the empty spaces with fog.

And there are the people. There are people here who are walking Chernobyls, carrying inside them a silent deadly poison that spreads every time they exhale, with every word they utter, contaminating whatever is in front of them with every act. They carry the germ of evil so everything they touch rots; even their breath, even their gaze, corrupts. Every time he sees Ricardo, Diego has the urge to flee, like a cornered wild animal. Now he watches Ricardo walk down the empty passageway towards him and he turns his head from side to side, although he knows there is no escape. Anguish and confusion make him dizzy and nauseous, sometimes he faints, and that’s the last thing he’d want to happen in front of the Hobo.

The guy is chewing something. He smiles, shows the gum between his teeth, walks around Diego, almost dancing, like a boxer circling his rival, bobbing and weaving; he rolls up his sleeves, reveals his black tattoos, letters that spell out names, skulls with glowing eyes, red bloodstains gushing across his skin.

He has the habit of bringing his mouth too close to the listener’s ear.

“You’re fuckin lucky, Sparrow,” he whispers, chewing both gum and words, spraying his listener as he speaks. “You been lucky ever since you got here.” Diego pulls his face away slightly, just enough to stem his disgust. The Hobo smells of stagnant water, of rancid sweat, of stale sex. Diego holds his breath, then answers.

The man spits the gum into the palm of his hand and stares at it. He talks without taking his eyes off the gum; he’s talking to the gum.

“I already told you how it goes in the cell.”

“The capanga handles the dough. He’s the boss; you give it all to him, he collects the rent, buys the coke, hands it out.”

Ricardo pinches the gum between his fingers, which are fat like blood sausages, then he squeezes it onto the window-pane with his thumb, pressing it flat like a shapeless coin.

“That’s what you gotta do, Sparrow.”

“And as you’re new, I’m gonna give you a tip: you’re lucky the capanga is shaftin the Candyman just now. But the Candyman ain’t gonna last forever. And you’re the new kid.” The Hobo looks up at the ceiling, sucks in air, purses his lips, pretends something is stuck between his teeth, removes it with his tongue. Diego capitulates, like he always does.

“If you could give me a hand… I’d be grateful.”

“You don’t get nothin in here by being grateful, Sparrow. I already told you. Luck don’t come free. You gotta pay for it.” The man shakes his head repeatedly, his hand moves towards his trouser pocket, he places a cigarette between his lips, holds a light to it, and all the time he is shaking his head.

“You gonna have to pay me, Sparrow.”

“Don’t be an asshole. I told you nobody give you nothin for free in here.” Diego feels the fear taking hold of the muscles in his face, contorting it into a grimace.

The hand that holds the cigarette makes an obscene gesture then returns the cigarette to the mouth. He snorts, his breathing agitated. Diego tries to calm him down.

The Hobo is trembling like a rabid dog about to attack, his eyes glare red as if in a bad photo, seeking out Diego’s own evasive gaze. His tongue is like a caged animal hurling itself against his teeth.

Suddenly he smiles and his face changes, he gently takes Diego by the arm. Hit by a wave of anxiety, Diego’s vision begins to mist over.

“Was that lawyer I gave you any good?”

Diego struggles to draw air into his lungs. “Yes, yes.”

“We’ve already spoken a couple of times and—”

“Antinucci’s the best. You gettin out soon, ain’t you?”

“So you ain’t gonna spend no time in here. I’m pleased for you, Sparrow. You got no idea how pleased.”

Hand on shoulder, pat on the back, more smiles. The occasional laugh.

The Hobo has stopped trembling.

This is what scares Diego the most inside prison, not the overcrowding or the promiscuity, not even the blows or the violence or the danger, but this arbitrary nature of affairs. The changing moods, the whims. The fact that nothing stays the same from one minute to the next. A schizophrenia of isolated events. A life at the mercy of men whose actions are driven by unbridled force.

“When you out, you gonna pay me back. By doin a job for me. You get that?”

“What does it involve?”

“You chickenshit. Who cares what it involves? You owe me your life.”

The Hobo pushes Diego without touching him, just with his gaze, and they walk until they reach a door that opens onto a courtyard, an arid freezing space, a concrete steppe where some dreamer or cynic has painted the white lines of a non-existent basketball court. To the right is a grey bench and just above it, protected by wire mesh, is a huge clock which always says half past five. Sitting or standing in a circle are a dozen or so men with rotten-toothed smiles, their faces scarred and pockmarked, all wearing extravagant cushioned sneakers. Their caps bear a well-known logo, and they wear them back to front in an act of aesthetic rebellion. They look like the results of a genetic mutation, a horde of soulless zombies about to sack the planet.

“Sparrow. He’s with the Chief and the Candyman. He’s a friend.”

“Hey, Sparrow. Gimme a phonecard, I’m out of credit.”

“A card, a smoke, whatever you got, my friend.”

“Stop fuckin around, asshole. Didn’t you hear the man?

The Hobo pushes him again, a rough hand squeezing his shoulder. “I’m gonna explain, but over there so these kids can’t hear.”

They walk towards the north wall, thirty yards or so from the nearest group.

They halt. Ricardo still has him by the shoulder. He brings his face close to Diego’s, narrows his eyes and thrusts his head forward, like a turtle. Flecks of saliva fly. Diego half-closes his eyes, stops breathing.

“Kid. I still see the mud roads in my village, I still smell the leftover bean and mutton stew. You know why I’m tellin you this, Sparrow?”

“Yeah, how would you know? Because I had enough of bein poor. You get me?”

“When I get outta here I’m gonna be rich. This is my chance; I want it to go right. There’s somethin big, very big, that the guys upstairs have already planned, and me and the boss need you to lend a hand.”

It’s cold, but who gives a damn. Diego starts to sweat. He observes the tattoos, the pictures of bloodstains; he asks himself what kind of human being has corpses, blood and entrails inked onto his skin. He retches. He’s desperate to escape. He’s nauseous.

“And what would I have to do?”

“You such a chickenshit, my brother. I ain’t even started.”

“Let’s go, Sparrow. Listen good, get your brain in gear.”

“We gonna take out an armoured truck. You just help them get away with the bags, that’s all. You’ll be on lookout; you grab the bags with the cash, and the same day you’re back home with the loot, no  problems.”

“And who’s organizing it? You? From inside?”

“Don’t be an asshole. I ain’t got the tools for a job like that. Less questions. I’ll tell you who the boss is later. First, I’m gonna tell you where you fit in. Come closer, little prince.”

The paw squeezes Diego’s shoulder even tighter, the mouth presses against his ear. He is invaded by the sickly heat of a rainy summer, although we’re at the end of autumn.

“The Candyman was gonna help me but there were problems; the stupid prick fucked up.”

“With the money from the coke; he tried to cut me out. And I don’t take that shit. The son of a bitch is gonna pay for it, I swear.” Ricardo forms a cross with his thumb and index finger and kisses it. “I swear he’s gonna pay for it.” Diego nods. And trembles. He knows he cannot allow himself to faint. He feels an almost physical disgust that makes him squeeze his lips closed; dazed by fear, he leans against the wall. A freezing wind blows from the north and Diego continues sweating like it’s the middle of summer.

Far away in the capital, Captain Leonilda Lima shifts uncomfortably in her seat, attributing her unease to Saturn’s unfavourable aspect in Taurus today.

The Hobo pronounces words that brook no argument; he raises his voice, whispers the name of the guy at the top, asks, demands, and Diego accepts. A circle has just closed. Diego is sweating; he looks at the clock and remembers it’s always the same time in here. 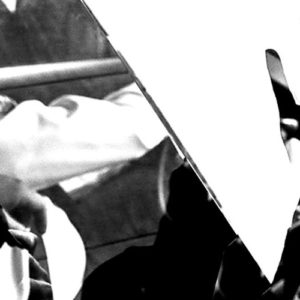 10 New Books Coming Out This Week Another week, another batch of books for your TBR pile. Happy reading, folks. * Russ Thomas, Nighthawking (Putnam) "Outstanding....
© LitHub
Back to top