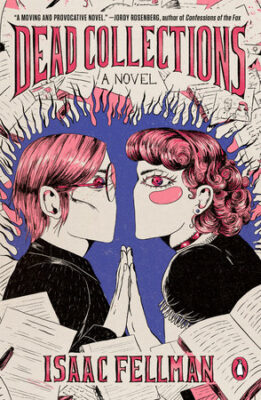 The following is an exclusive excerpt from Dead Collections, by Isaac Fellman. Sol is an archivist at a California historical society in a world in which vampirism is understood as a medical condition. Suffering from this disease, he spends most of his time in his basement office, until he meets Elsie, the recent widow of a celebrity, come to donate her late wife's papers. And as they fall in love, they discover that there is much about the world they must navigate and confront.

Someday, I will write all this down. For now, I prefer it in my head, where it’s mutable and fresh as clay. I prefer to remember this story between one bright moment and the next of an increasingly crowded life. It’s not an old story yet, and I am still figuring out what it means.

I used to be an archivist at the Historical Society of Northern California. The society is in the basement of a building on Market Street, a basement whose generous toilet was always on the edge of overflowing, and which had mice but not rats. The rooms were really designed to be storerooms. I had an office, by virtue of my seniority, which was just off the main workroom and fifty feet from the vault; the director’s office was next door. She was off on maternity leave, so I was in charge. The carpet was thinly striped in maroon and beige, clotted with dust and crud and rusty staples. The walls between the offices and the vault didn’t have any tops to them. You could bung a penny or a plasticlip right over them, and I have, late at night after everyone’s gone home.

Every day I felt the city’s palpable weight. There was a tenstory building above us, sealing the daylight out like a stamp, but it felt sometimes like fifty stories, a hundred stories. I would come out at night almost dazed that the city was so small. In my mind, it all grew to monstrous height above me, rootless and dazzling.

The elevator dinged outside the archives’ door. Normally at that point you heard an anxious hup, the sound of someone turning our gritty steel doorknob, unsure whether the archives can even be in here—in this vinegar-smelling hallway like a conduit for acid, like a long-abandoned part of the body. Elsie turned it with confidence, like staff. But when she was inside, her hands were hesitant, and she looked around the same way most people do at first: slow and wondering, with more up in the look than usual. Our ceiling’s low, but people always do look up, as if they’re worried about the weight of the city too.

It’s hard to remember my first impressions of Elsie, who has become so familiar to me that those memories are all worn away like stones in a watery cave. First impressions are strange things. I believe in them the way I believe in fortune-telling. What, then, did she portend?

I think she was all stiffness and solidity. A tall woman, big, in a stiff green velvet dress whose skirt stood out from her hips. Some big women are loose and soft, with a creamy invitingness—I mean not of attitude or personality, but a coincidence of how their body’s built. Elsie’s body was of denser stuff, and her face was matte and inexpressive, and her brown hair in a curly bob was very much “done.” I read her as about my age, forty-one, though I look much younger than I am and it turned out that she looked a little older. Her fingernails were matte too, kept short but manicured in black, and when her hand met mine, it was if it had slipped beneath that painstakingly warmed skin and peeled it off. She was shaking raw muscle, and her hand was much colder than mine. Her shake was weak, her hands soft.

Where had this jolt come from, this shot to the heart? I saw my little office through her polite eyes: the jar of bitten pencils, the trash can full of water-damaged folders. On the wall was a panel from an old exhibit, Blood: The Last Hundred Years—a paragraph of absurdly somber text, headlined “Vampirism: ‘The Thirsty Sickness.’”

I motioned her to the sofa and all at once I was aware that it was the sofa where I slept. It seemed suddenly inappropriate, even with my nubbly electric blanket folded away and sitting on my piano keyboard, the cord still protruding down and plugged into the wall. I like things tidy and efficient, although I do very little with the time I save.

“So I think I told you that I’ve been planning to donate my wife’s things,” she said, prompting me. I must really have been sitting still for the full length of that paragraph, dazed and breathing my reflexive breaths. It takes the body a long time to forget that it doesn’t need to breathe anymore; I know very senior vampires who still do.

“Yes, well,” I said, and I launched into an explanation that’s not relevant here: our collection policy, how we decide what to accession, committees, my absent boss. Then I snapped protocol like a rubber band and added, “Of course, we’ll say yes. For a collection like this, that’s just a formality—the only objection I could imagine is that it’s a bit out of scope, since Tracy lived in Los Angeles for most of her life, and she went to USC, and no doubt they’d be very interested in her papers.”

“Her novel,” said Elsie, as if I ought to know. Then there was a faint embarrassed shifting whose source I couldn’t determine. Her hands? Her breath? Something deeper in the body that showed itself only in a twitch of the skin? “She’s been writing it for the past seven years. I think it was almost done, but she didn’t want to show more than a few paragraphs to anyone, even me. The whole time she was dying, I expected her to show it to me, or to give me some idea of what to do with it. But she didn’t.” “So typically an archivist will want you to donate the copyrights to the work, so that if we lose touch with the heirs, we can still publish parts of things, or give permission.”

“Oh, that’s fine. I never want to see this stuff again.” She went rigid for a moment and looked down. “I’m sorry if I sound callous. It’s just that I feel her presence, and it makes me so tired.”

“People tell me that sometimes.” “They do? Why do you think it is?”

“Loss of context,” I said. “That’s what I think. When I take in a new collection, every tchotchke and every line of text feels like it’s been soaked in meaning but left to dry out. So what’s left is just a color, and a mark, and maybe a smell, but what the liquid was is impossible to tell. You can’t know why they kept these things, and you drive yourself nuts trying to understand what was in their mind. It reminds us that we can’t know our loved ones’ minds.”

“Oh,” said Elsie, her face collapsing into a smile, “I knew her mind just fine.”

“No, you’re clearly not. But you didn’t know Tracy. She had a mind that you had n choice but to live inside—not that she was a cruel person, an abusive person—but she was a very fully realized person. And it got worse when she died. Tracy alive

was like dating a boa constrictor, or that Norse snake whose body is the world. Tracy dead is like dating nitrogen or hydrogen. She’s in every particle of air. I’m sorry,” she added.

She wasn’t apologizing for her words, but for a rough flurry of tears that had broken through her smile, and I poked the tissues on my desk and she took three in loud, quick succession. She wasn’t doing that tender little dab-crying women in makeup do. She was mopping her eyes, blowing her nose, sobbing.

I went to get her a glass of water, although there were archival papers in my office. I just couldn’t bear to watch her cry without doing anything more. She took it when I nudged it into her hand; she drank it with her hand over her eyes, like an initiation. Then our eyes met, mine dry and hers wet and mascara-softened, and she said, “Thank you.”

“People cry in here all the time.”

“You know, in another life, maybe I would’ve been a librarian,” she said into the cup. “Do people tell you that a lot too?”

“Yes, but any reasonable person would want to be a librarian.” She smiled again, but I could tell that she felt a little dismissed. “I actually do work with an archive, though.”

“I’m on the board of the Organization for Transformative Works.” She fingered the edge of the cup and finally threw it away. “So we run something called the Archive of Our Own, which is for fan fiction—”

“Oh, I’m very familiar.” I felt my voice drop three notes, the way people’s voices do when they meet another person who’s ever been deep in fandom. The vocal cords thicken with irony and the dirt of the trenches, and you don’t have to say any more; you know you share a secret. She noticed that, and all at once her face was approachable and wry, each smile line clutching tight some small emotion.

“Original Trek,” I said, “Lord of the Rings, the movies. That’s neat, though, that you work with the AO3.”

“Well,” I said, “they think it’s ephemeral. But I have twenty feet of boxes labeled ‘ephemera’ in the back.”

After the meeting I took out my phone and looked at my face in it. I can’t see myself in a mirror, but I can see myself in a camera, and so I am used by now to seeing myself washed-out and grainy.

My little face looked back at me, sallow with smooth delicate skin, my long-drawn teeth, the chin-length hair—brushed back— that I’ve never cut because I might regret it and my hair will never grow again. Was my chin a little squarer, my nose a little bigger? Everything seemed to be going so slowly. My eyes were hot in their sockets and when I closed them I saw bars of light. I needed my transfusion.

A Brief History of Xenophobia In America 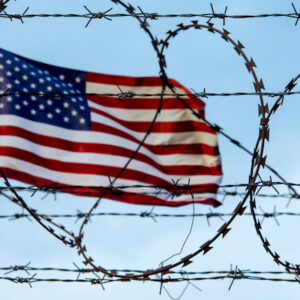 A Brief History of Xenophobia In America One of the oldest myths in American history is the notion that racism and discrimination toward newcomers is hypocritical...
© LitHub
Back to top