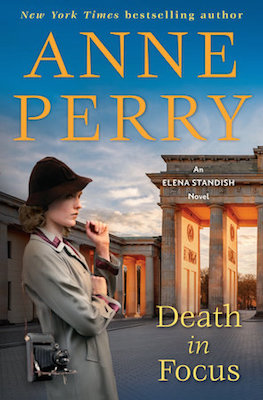 The following is an exclusive excerpt from Death in Focus, the new novel from Anne Perry. Touring Italy after the Great War, sisters Elena and Margot meet an enigmatic young man named Ian. But after a sudden turn of events, Elena finds herself having to take up Ian’s task: delivering a top-secret message to Berlin. Back in England, Elena’s grandfather, a former M16 spy, has discovered a pattern between Elena’s movements and an event involving the nascent Third Reich.

When dinner was served, Margot ate with pleasure, but part of her attention was on Elena, lost in the moment with Ian Newton. She seemed happier and more alive than Margot could remember seeing her in ages. It was the way she used to be, before Aiden’s be­trayal of his country and, more personal, of Elena herself. She was so afraid of being hurt again. Who wasn’t? And yet, to deny feeling was to kill part of yourself.

Margot had thought that she would find someone else to love, after a reasonable time of mourning Paul. But how long was “reason­able”? For her, even fifteen years after his death, nothing was more than casual. She had idiotically hoped that there might be another love out there for her and yet she felt guilty at even the possibility. How could she go on, when Paul was gone? But there had, however, never been anyone else who mattered. Perhaps half of Europe was like that, if you could see beneath the wine and the laughter.

But for Elena it was different. There were no perfect memories with Aiden. They were all painful and needed to be obliterated, re­placed by something that was at least honest.

While paying surface attention to Walter Mann, Margot watched Ian Newton. Even from the little she had overheard she learned he had been at Cambridge. So many of her family had been there, too. Her grandfather, Lucas Standish, although she didn’t know what he had studied. It was probably history and classics, or something like that. Her father, Charles Standish, had studied languages and mod­ern history, obvious really, for someone who was going into the For­eign Office. Mike, her brother, had been going to read classics but war had interrupted all of that.

And Elena had gone to Cambridge, too, and taken classics for the love of studying. Margot could imagine her sister sitting elegantly in one of the flat-bottomed punts, with Ian standing in the back, a pole in his hand as they glided smoothly along the shining river. Maybe they knew each other, at least by sight? She must remember to ask Elena.

Margot had not gone to Cambridge, or anywhere else. She had been a bride at eighteen, and a widow a week later.

Walter Mann was watching her. Was that compassion in his eyes? Damn it, she had no need of his pity! She smiled as if she were happy, and she was good at that. She had had sufficient practice.

There was a band playing gently and the music was hypnotic, exquisitely rhythmic, American. On the small dance floor young people moved as if lost in its embrace. She could see their faces, so many of them beautiful in their own ways.

Why was she watching instead of joining in? Everyone had fin­ished dining; it was time for her to enjoy herself.

As if reading her thoughts, Walter stood up. He smiled at her, meeting her eyes. “Will you dance with me? That gown is marvel­ous. It really needs grace, movement. And you are exactly what it requires to be perfect.”

Her answering smile was sudden and quite genuine. He had not said what she had expected. “Thank you. It is a new and rather ap­pealing thought: So little is perfect.”

“I disagree,” he said lightly. “Everything here is perfect: the light, the music, the faint air of desperation, as if it would all slip away the moment we stop enjoying it. It is like sunshine in an English April. It’s so precious because we know that, in an hour or less, it will rain again. The light must go, and suddenly it will be even colder than before.”

She looked at him with real interest now, searching his face.

He kept the same charming smile. “If it were here all the time, we would take it for granted and cease even to see it anymore.”

“I would love to dance,” Margot accepted, taking a half step toward him.

He held her very lightly. The music began in earnest, almost as if it were a literal tide sweeping them into its current. He was an ac­complished dancer and, thank heaven, he had the good taste not to talk. Margot simply let herself move with the beat, enjoying it, fol­lowing him exactly.

The music changed, and the rhythm, but it did not matter. He moved as smoothly from one to the other as she did. That was part of the secret of success, not only in art, but in life—moving from one beat to the next without hesitation.

Margot gave a little laugh of pleasure at his skill.

He held her closer, just an inch or two.

She leaned back and looked up at him. He had remarkable eyes. Did she see the pain of memory in them, or just imagine it mirroring her own? He held her closer again, more gently. Perhaps he had lost someone, too. Who hadn’t? They should hold each other more tightly, and dance more perfectly, drowned in the music.

Elena was also dancing now, not even thinking about it, moving as easily with Ian as if she had always known him. Like Margot, she hated to talk while dancing. The conversation was in the movement, and the music was master of it all.

Elena looked around the room. Mostly men: civilized, intelli­gent, and as dry as dust. Some of them had drunk a little too much, but they only looked sleepy. Good heavens, had they bored them­selves to death?

The music stopped and members of the band stood, signaling the end of their playing.

Margot, Elena, and the two men went back to their table, where Ian wished them all good night. “May I walk you to your room?” he asked, offering Elena his arm.

They passed through the large doors and climbed the stairs to the first landing. Elena turned and faced him. “Thank you for a lovely time,” she said. It was no mere politeness. It was the happiest evening she could remember in years.

“It was fun,” he said quite lightly, but his eyes were totally seri­ous. “I think I shall become a photographer’s assistant. It’s infinitely more satisfying than writing about economics.”

Whatever he had been going to say next was interrupted by a shriek from the landing above them, shrill and edged with horror

“It’s very uncertain,” she said, playing at being serious.

“Life is very uncertain,” he replied. All humor vanished for a moment. “Cling to the good bits.”

Whatever he had been going to say next was interrupted by a shriek from the landing above them, shrill and edged with horror. For a moment they froze, then Ian swung around and began to run toward the screams as they came again and again.

Elena followed, taking her camera out of its case. Someone was obviously in great trouble.

Ian stopped abruptly. A young woman in a black maid’s dress and white apron was standing ashen-faced with one hand to her mouth. The linen cupboard was open and just outside was the crumpled body of a man. From the unnatural angle of his head and neck it was clear he could not be alive.

Ian’s face had turned completely white. He gently put his arms around the sobbing maid, then held her tight, but when he spoke his voice was half-strangled in his throat. “Come away. You can’t help him. Don’t look . . .” Firmly he guided her around the corner from sight.

Elena was left staring at the dead body sprawled on the floor. The closed door must have been holding him up, and when the girl opened it he fell out. He was an unremarkable middle-aged man. Dark-skinned. Black hair receding a little. He was probably Italian, but he could have come from anywhere. Did Ian know him? Is that why he was so upset? He had looked totally shocked. Elena was shaking, yet she managed to shoot one picture before putting the camera away. She was a photographer, true, but it might seem in­trusive, and perhaps it was illegal, to photograph a crime scene like this. “Signorina . . . Miss . . . please, come and sit down . . .” A man took her tentatively by the arm.

“I have no idea.” The man was an assistant manager at the hotel. She knew him by sight from the last few days. “Please . . . I wish to call the authorities. It cannot be an accident. Where he is . . .”

“Are you all right? Do you need someone?”

“No, thank you. I am with my sister.” She said goodbye and went back along the corridor to where Ian was speaking gently to the maid in fluent Italian, but he was still very pale, and the hand he had on the maid’s arm, where he was still supporting her, was white-knuckled, almost as if she were holding him up as much as he was holding her. An older maid appeared along the passageway and took control, thanking Ian and firmly dismissing him.

Two uniformed police officers went past the woman and spoke to Ian in English.

“Now, sir, if you will tell me what happened?” one of them began.

“And this young lady was with you?” The officer looked at Elena.

“And do you know this poor man?” He indicated the body lying on the floor.

“No, sir,” Ian replied, his jaw muscles tight, his voice shaking a little.

Elena was almost certain he was lying. 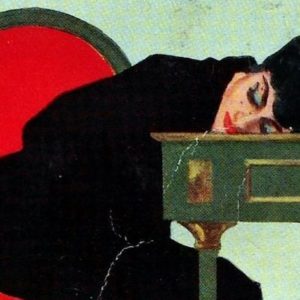 The Golden Age Detective Fiction Renaissance Not so long ago, Golden Age detective fiction was hopelessly out of fashion. Yes, Agatha Christie continued to sell, and her books...
© LitHub
Back to top